Deep veins of American history — past and present — in 162 square miles of Montgomery, Alabama.

MONTGOMERY, Alabama - "Montgomery is a city that’s still learning how to tell its story," a shrewd turn of phrase dropped into casual conversation by Wade Preston, the founder and head roaster of Montgomery’s coolest new coffee shop.

That coffee shop, Prevail Union, is tucked into an alleyway where the Montgomery Fair Department Store once stood. No one would think twice about that old department store these days, were it not for a female employee named Rosa Parks who, upon leaving work one evening in 1955, rode the Montgomery city bus and refused to give up her seat.

Spend any time at all in Montgomery, Alabama, and you quickly discover that the city is full of these places: unassuming storefronts, street corners, churches, old houses, and landmarks that are pivotal to the legacy of racial terror in the Deep South, but that you might walk right on past if you didn’t know any better. That fountain? A former slave market, one of the largest in the Antebellum South. That stately home? The first White House of the Confederacy. That old greyhound bus depot? The site of a bloody race riot.

Montgomery is a city that’s still learning how to tell its story – and that story is haunting. But it’s also a story marked by resiliency, courage, hope, and the men and women, black and white, who call Montgomery home today. 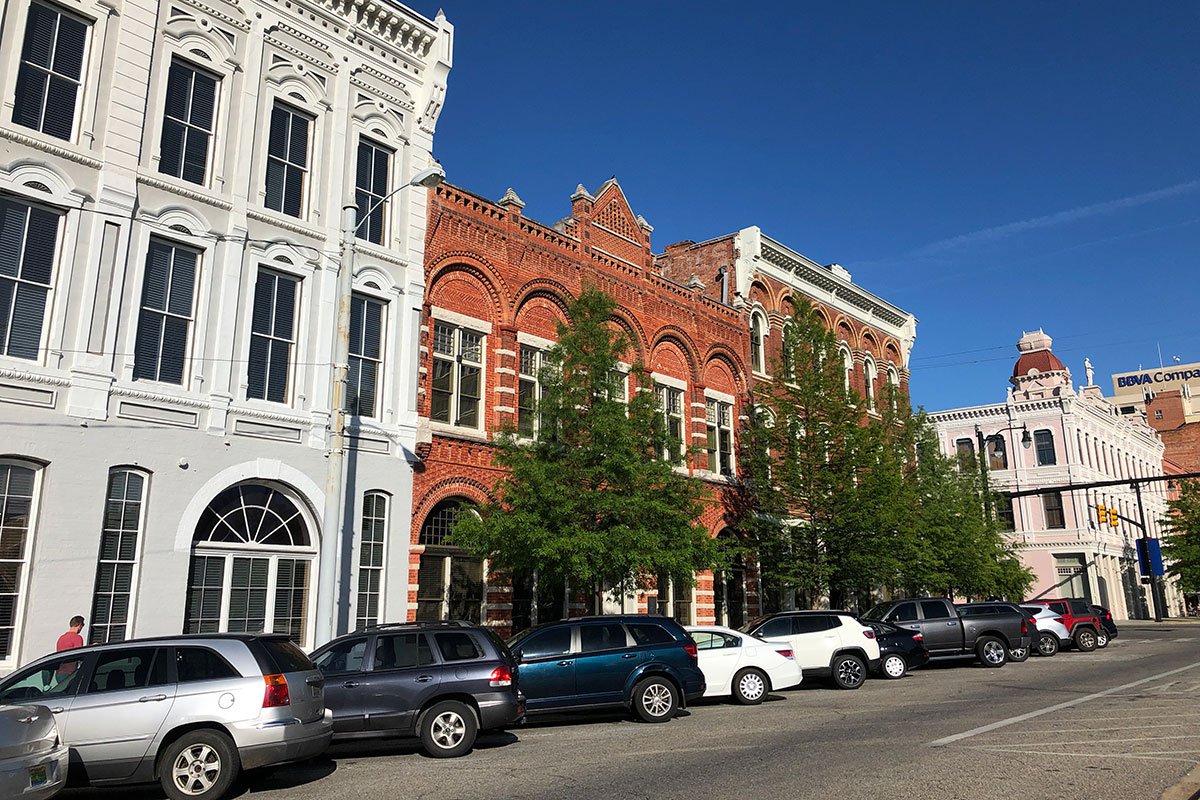 The Legacy Museum
115 Coosa St.; +1-334-386-9100
The Legacy Museum is owned and operated by the Equal Justice Initiative, and if you’re unfamiliar with EJI, click here or here before reading on. The Legacy Museum tells the history of African American oppression in the United States, from enslavement to segregation to mass incarceration in the modern day. In addition to being a moving, heartbreaking, and compulsory introduction to Alabama’s tortured history of racial violence, it may be the most well-curated history museum in the country. (Tickets are $8 for a timed entry.)

The National Memorial for Peace and Justice
417 Caroline St.; +1-334-386-9100
Also created, owned, and operated by EJI, but located on a different site just a few minutes from downtown. This is the nation’s first memorial dedicated to the terror lynchings of African Americans between 1877 and 1950, and is unlike any other memorial in the country, maybe even in the world. It’s a sacred, profound place, and if you do one thing in Montgomery, it should be this. (Tickets are $5, or can be purchased together with tickets to The Legacy Museum for $10.)

Dexter Avenue King Memorial Baptist Church
454 Dexter Ave.; +1-334-263-3970
Attend a Sunday service or take a guided tour of this historic church where the Reverend Dr. Martin Luther King Jr. served as pastor from 1954 to 1960. Here, you can see the actual pulpit from which Dr. King first preached his message of peace and brotherhood, and tour the basement where he organized the Montgomery Bus Boycotts. If you’re lucky enough to have Wanda as your tour guide, listen closely – you’re in the presence of a true spiritual leader, not unlike MLK Jr. himself.

The Scott & Zelda Fitzgerald Museum
919 Felder Ave. #919; +1-334-264-4222
Zelda Sayre, a Montgomery native and socialite, met young F. Scott Fitzgerald while he was stationed just outside Montgomery during World War I. After the couple married and spent the roaring 20s traveling across Europe, they settled briefly at 919 Felder Avenue, which is now home to a museum displaying love letters, manuscripts, and personal items that belonged to the Fitzgerald’s. And if you really want to channel your inner flapper, the rooms above the museum where Scott and Zelda lived are actually available to rent on Airbnb.

Alabama Shakespeare Festival
1 Festival Dr.; +334-271-5353
This “festival” is actually a year-round professional theater that also happens to organize one of the largest Shakespeare festivals in the world. Each year, ASF puts on ten plus productions, including some Shakespeare and a variety of other shows ranging from kid-friendly to literary plays and everything in between.

Montgomery Biscuits
200 Coosa St.; +1-334-323-2255
If anyone can think of a better name for a professional sports team, please, let me know. From April through August, you can catch a minor league baseball game at this family-friendly ballpark, and, if you’re lucky, a biscuit from an air cannon. (No, seriously: you’ve heard of a T-shirt cannon? Well, this cannon fires out wrapped-up biscuits.)

Common Bond Brewers
424 Bibb St.; +1-334-676-2287
Montgomery’s first production brewery and tasting room, Common Bond is proof that this city is teetering on the verge of cool. Although they only just opened in 2018, their tap room has quickly become a hot spot for both beer lovers and friends of the founders – which in a small-town-meets-city like Montgomery, is pretty much everyone.

Vintage Year
405 Cloverdale Rd.; +1-334-819-7215
An upscale fixture of Montgomery’s dining scene, but not without down-home staples like fried green tomatoes and stone-ground grits. Once a former bottle shop, it has an impressive wine list that pairs excellently with seriously delicious food.

Leroy
2756 Boultier St.; +1-334-356-7127
A sultry cocktail bar that feels more like an after-hours Bushwick drinking den – complete with a DJ spinning records in the corner – than an Alabama watering hole. The bartenders here are the real deal, so don’t be afraid to go off-menu and ask them to whip up something special.

Martin’s
1796 Carter Hill Rd.; +1-334-265-1767
The type of place you’d write home about, where the sweet tea flows and the floor-to-ceiling wood paneling takes you back to a simpler time. Order a fried “pulley bone,” the preferred Montgomery cut of chicken, with a smattering of sides like mac and cheese, black eyed peas, and collard greens, topped off with what is guaranteed to be the largest, most delicious slice of lemon meringue pie you’ve ever tasted.

Capital Oyster Bar
617 Shady St.; +1-334-239-8958
At the end of a long dirt road you’ll stumble upon this locals-only spot on the Alabama River known for its live music, prime people watching, and lip-smacking-good oysters. Come Sunday mid-afternoon after church lets out; leave after the band’s gone home.