Fashion and faith make strange bedfellows, Liza Foreman learned when she stayed at a monastery and in a convent while covering Milan and Paris Fashion Week.

MILAN and PARIS – They say that Coco Chanel grew up in a convent, which I hope makes a recent travel escapade in which I had to sneak out of one each morning to cover Paris Fashion Week, legit.

Surely, she did the same thing.

Although having experienced the agony of being ticked off by the nuns every night and the ecstasy of writing up big fashion shows by day, this is not an experience that I am keen to repeat.

It all began when I discovered that the least expensive place to stay for Milan Fashion Week in September was a modern-day monastery that looked more like a prison. I then learned that a convent bed in Paris goes for as little as 15 euros a night, even during Fashion Week.

Newspaper budgets are not what they used to be, and this, I decided, was the only choice on my non-existent freelance budget. I managed to secure a single room at Monastery Guest House of the Francescani via Monastery Stays. It looked hideously ugly from the photographs, but it cost 47 euros a night and included breakfast. It was, the reviews said, central and friendly. It would have to do. I paid my deposit and hoped for the best.

Milan was settled; Paris was next. I called to the sisters of Sacré Coeur in Montmartre. They were full, but they put me in touch with Prieuré Saint Benoît nearby, and they had room.

Oui, I said, after traveling on assignment for six months, I wanted to do a retreat.

A bed was mine with three meals a day for five nights for a total of 200 euros. I imagined a beautiful old convent with roses climbing up the walls. Although I did love the idea of a retreat, I had my doubts about how this might work, but I decided to have faith in the travel gods. A few weeks later, after winding down the summer on the Venice Lido, I exchanged my summery shorts for a suit and took the train to Milan.

Bags safely deposited at the station, I waved down a taxi and sped across town, arriving in time to watch Gucci send down the runway beautiful re-workings of everything from the kimono to basketball shorts with Art Nouveau and sportswear themes. I swigged back a glass of Champagne.

I spent a blissful two hours on the terrace of Sheraton Diana Majestic next to the show, writing up the review, eating risotto Milanese and drinking tea, remembering the time when we were lucky enough as staff reporters for Variety to sleep on assignment in posh hotels like this. 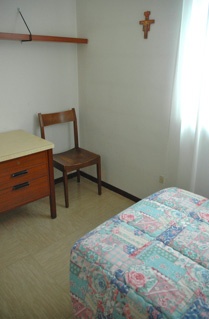 It was time to brave the monastery. It was just as ugly and just as friendly as promised, though not exactly central. After wandering past the high rises in the vicinity and the one beacon of fashion hope, a L'Oreal building, a kind old lady showed me to my room. It gave a new spin to the word "austerity." There was a bed, a desk, and a shower, but no soap and definitely no internet.

My luggage was still at the station, so I traipsed off to get it. The room decor was probably designed to keep me focused on the crucifix, I thought along the way. When I was tucking into bed that night, I put my hopes on breakfast. What I found at 8 a.m. was a man serving tea at a bar. "Breakfast" was a choice of a packaged cookie or croissant from the shelf next to the beer glasses.

I wandered across the street to the neighborhood cafe opposite the church and found more old ladies, drinking coffee and smoking cigarettes. As there was no Wi-Fi in the convent, this would be my morning office. I ordered a croissant to qualify for the Wi-Fi code and batted off emails that made no sense to editors and Google-mapped Fashion Week HQ.

The good part about paying 70 euros for a press pass, I discovered an hour later, was the nice sofa in the blogging corner at Fashion Week HQ (it replaced the cafe as my office) and lunch on the press terrace overlooking the Duomo.

The press bus had left for the day, so I sat in cabs in traffic and panicked. I ran into shows and watched Armani water lilies and Prada footballer kits, then darted back to file before going down to Grand Hotel et de Milan where the concierge was kindly holding my tickets. In the days when newspapers had budgets, I often stayed here, and it is still my favorite hotel. (I could not have the fashion houses hand-deliver my tickets to a monastery.)

Thus two happy days passed, batting back and forth to shows and shuttling the length of Milan to sleep in my small wooden bed. There were no expectations at the monastery, just that I leave my key behind every morning. It was funny to spend my days in places like the vast minimalist structure of the Armani building, then return home to practice spirituality by way of yoga at night in a barren monastery where cleaning ladies bickered in the morning. They were very sweet, but offered no guidance in terms of fashion, except to suggest that woolly jumpers are back in. 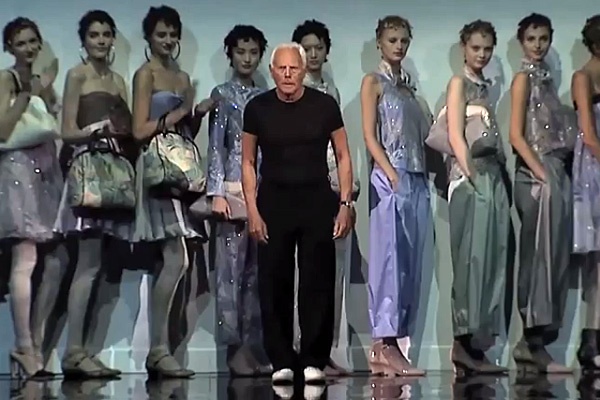 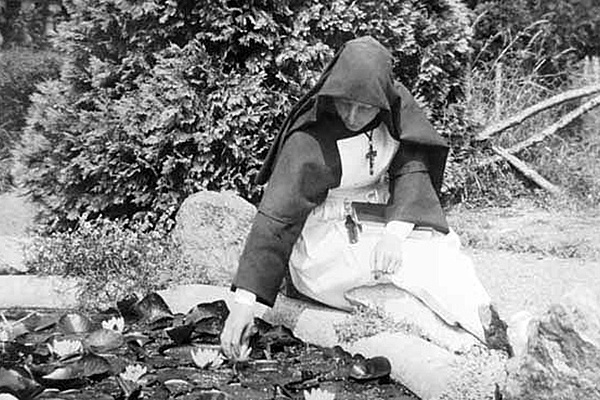 A nun and her water lilies, 1926. Photo: National Library of Ireland / Creative Commons

Then disaster struck late one night after a Versace show. After reviewing the collection and an emergency food trip to a pizza place, I scrambled back to make curfew. I had only learned about curfew the night before when I returned at 10:50 p.m. and had to beg the doorman for ten minutes to send photographs from the cafe.

What I did not realize was that after 11:10 p.m., the monastery goes into lockdown mode. And so late from a long train ride, I arrived at the ungodly hour of 11:30 p.m. to find everything locked and bolted. I rang the door endlessly and finally found someone in a room above.

Can you let me in? I called up. No, he said. It is locked. The Lord then closed his curtains and ignored a woman on the street close to midnight.

So I traipsed back to the Grand Hotel at 1 a.m. and was told I could stay in the grand lobby living room while the kind concierge phoned a colleague at a cheaper hotel. I did not have my passport on me — God had kept it for the night — but by 1:30 a.m., a solution was found. I had a print-out of my passport, and the taxi driver had instructions not to let me out of his sight until I was safely inside my hotel. The area was dangerous, the concierge said.

After haggling at 2 a.m. for a rate of 104 euros and begging for a toothbrush, I secured a room with two double beds with piles of fluffy duvets. There was a God. And what's more, a real breakfast buffet. This was heaven. The following morning, I piled up on real food — eggs, sausages, tea, and fruit — and crawled back into bed until check-out at one minute before noon.

It was back to Fashion HQ where it all suddenly seemed like a dream. I spent an afternoon recuperating in a wonderful spa filled with old Roman bathtubs operated by Culti (Via Mauri Angelo, 5; +39-02-4851-7588). Back at the monastery (I had to change into a designer dress for an Anna Piaggi exhibition), I told one of the old ladies about my lockout. She shook her head sadly and informed me that curfew for the weekend (which it now was) was midnight. I almost asked her to sign an affadavit.

Midnight worked out just fine. But come Monday morning, the last day of the shows, I dragged my bags to Fashion HQ, did a last review and decided I needed a day at the beach before Paris. I made a dash for the train station. 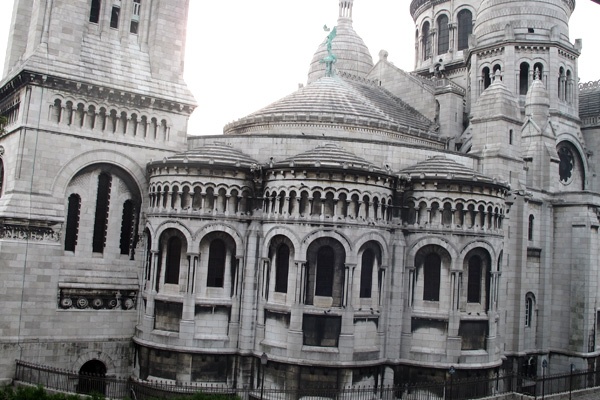 The view of Sacré Coeur from the author's convent room. Photo: Liza Foreman

Eight hours later, I checked into a small hotel in Cannes, a home-away-from-home after years of covering so many film festivals. I went straight to my favorite hole-in-the-wall restaurant for a glass of rose in celebration of surviving the monastery.

Little did I know that the worst was yet to come. I stayed an extra night and shopped, swam, and learned that Osama Bin Laden's brother had a home for sale on the coast. The phone rang. It was the sisters from the convent in Paris, calling to confirm my arrival. I was, by this point, a day late, and they were concerned. I made up some excuse about missing my flight and promised I'd see them soon. 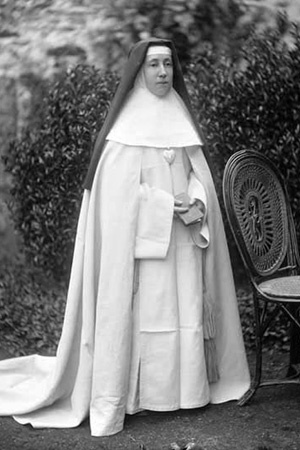 My first Paris show was Gareth Pugh. Slinky creatures in sculpted jackets and ostrich feather headdresses paraded about, and I rapidly began writing before making a mad dash for the 9 p.m. curfew. I took the funicular up to Montmartre to Prieuré Saint-Benoît-Sainte Scholastique (3, cité du Sacré-Coeur; +33-1-46-06-14-74) and found that not only was I staying next to Sacré Coeur but that my room overlooked it.

"We are here for you," the sisters assured me. How sweet of them!

I dashed down to prayer service at 9:15. After the spectacle of the Pugh show, I enjoyed the tranquility and uniformity of the white habits and the beautiful French singing. Still. I had no idea how to tell the sisters that I would need to miss lunch to watch a fashion show or where to tell the car to pick me up. I reassured them I'd be back in time for prayers at 11 a.m. — and I returned at 3 p.m.

There are starving children, and you missed lunch, the lovely nuns told me after unlocking the door.

After apologizing, I escaped to the Irish pub playing disco music next door to file my story. Back at the convent, I found myself alone for dinner. Needless to say, it was a shock after the buzz of Fashion HQ. I dutifully went to prayers and thought about how silly fashion is, before bolting up to my room to finish writing about a new collection on an iPhone sitting on my balcony looking at the Sacré Coeur. I was now locked in for the night. Another day, another near-empty dining hall, another round of prayers. With one full day of work left, I made the fateful mistake of phoning late to say I would miss dinner. When I returned that night, I was told off again for missing yet another meal. 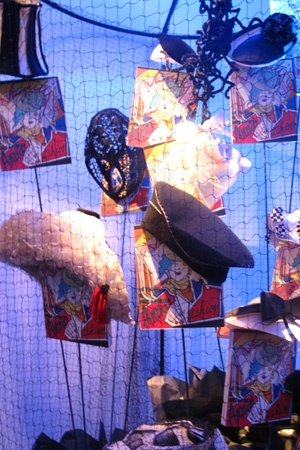 The next morning, I made my apologies (so many apologies to so many nuns...) and left. This was a place for a retreat, the sisters said, and you work too much! I thanked them. Life resumed as normal when I checked into Le Parc Hôtel, a flea-pit I knew on the outskirts of Paris. To my delight, it had been fully renovated and only cost 50 euros a night.

Bliss and freedom followed, along with the lingering question of which came first: nuns or fashion? Was it because the church had made us ashamed of our bodies that we craved clothing, or was it because we had abandoned religion and simple, solid principles that we had fallen into the clutches of fashion?

Neither world was perfect. But that weekend, my beloved, rundown hotel proved to be a perfect balance between the two.