We know Los Angeles as the home of the moving image, not the written word. But Natalie Compagno, the worldly and well-read former bookshop owner, knows more than just about anyone than the local literati scene. Which means there's no one more qualified to take us on a tour of the reading nooks, the thinking places, and the scenic haunts of talented and tormented writers who dedicated themselves to the page.

LOS ANGELES – Literary Los Angeles. The alliteration just rolls off the tongue. And despite its celluloid reputation, this is, in fact, a city of writers. Hollywood has nurtured — and tortured — some of the world's foremost literary geniuses. Movie writers aspire to publish award-winning novels, and novelists hope that their books make it to the silver screen. Los Angeles draws talent with her mystery and allure. Faulkner, Hemingway and Fitzgerald (to name but a few) are better known for their novels, but all tried their hand at screenplays. In the modern age, writers like T.C. Boyle, Hector Tobar, and Lisa See are keeping the tradition alive.

In return, Los Angeles rewards book loving visitors with indie bookshops, an incredible public library system, peaceful places to read or create, and ghosts of authors past around every corner. Rent a convertible at LAX. Your first stop is the Sunset Strip. 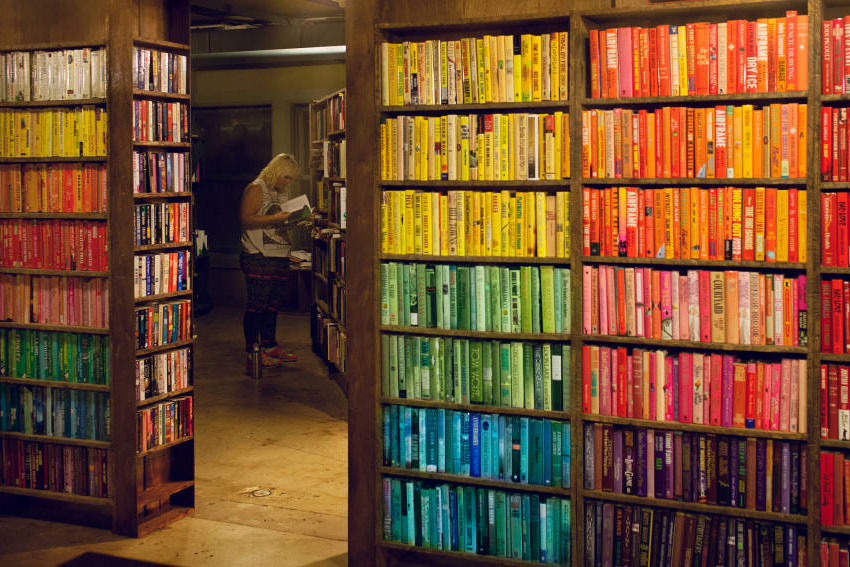 Curiosity beckons to the color-coded shelves. Photo courtesy of The Last Bookstore.

The perfect place to start the literary tour of Los Angeles at the diverse indie bookstores that give bibliophiles such joy.

Book Soup
8818 Sunset Blvd.; +1-310-659-3110
What could be cooler than an indie bookstore on the Sunset Strip? Book Soup is famous for putting culture into the legendary rock and roll haven while embracing the drama. They don't mind staging publicity stunts to attract attention for authors and banned books, like placing the three remaining Doors band members in three different locations for their "joint" book signing becuase they were all suing each other, or hiring protestors for Paris Hilton's book signing to pretend they disliked her book. Book Soup is nevertheless a serious home for the written word, and their signings are a must for rubbing elbows with the literati.

Arcana: Books on the Arts
8675 W. Washington Blvd.; 1-310-458-1499
Walking into this book store in the historic Helms Bakery is like walking into a beautiful museum. Specializing in unique and out-of-print volumes on 20th-century art, architecture, and design, Arcana's shelves are packed with beautiful gems and rare finds. The vast collection is highly curated, from performance art to skate culture. Readers and writers alike come here for the nuances found only in obscure art and coffee table books.

The Last Bookstore
453 S. Spring St.; +1-213-488-0599
You feel a palpable buzz the moment you enter this 20,000 square foot space that's part living room, part warehouse, all book nirvana. Literary lovers will rejoice in the frenzy of so many people browsing and buying more than 250,000 new and used books. Downtown Los Angeles is exploding right now, and this bookstore is one of the hotspots that's making the area such a draw. 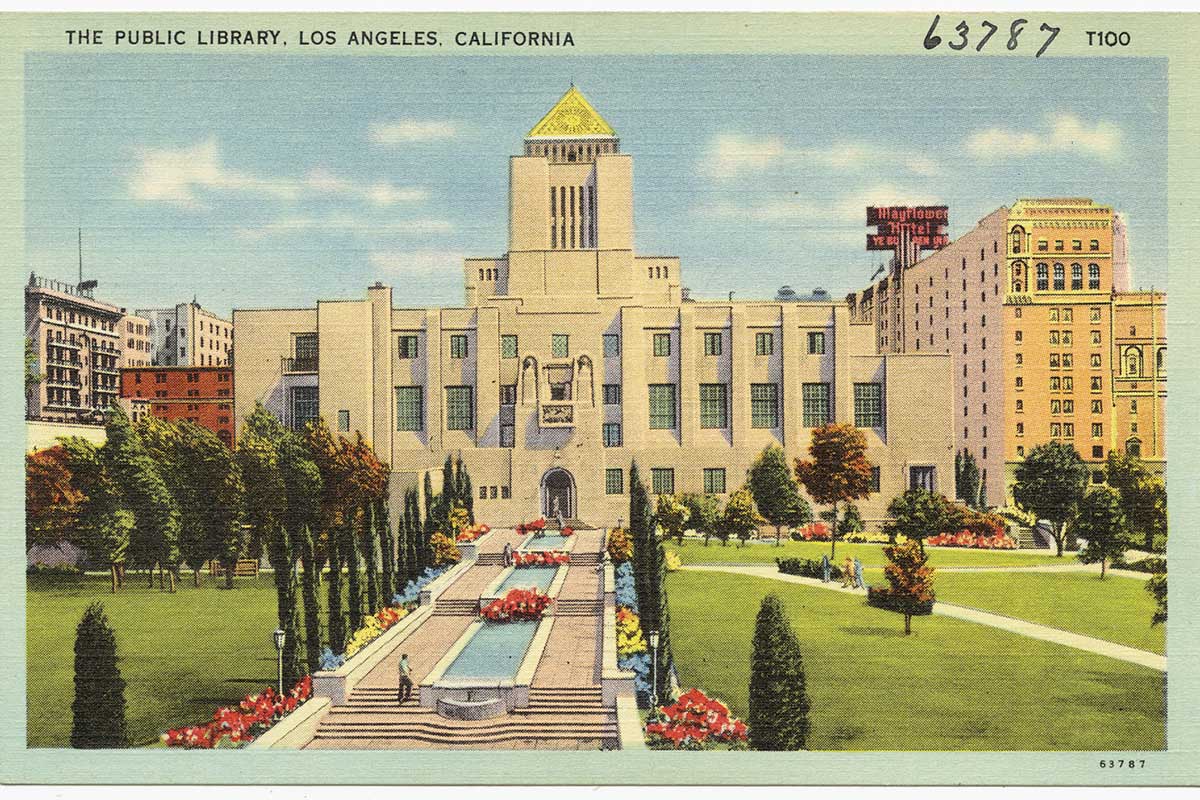 THE BEST PLACES TO READ

After stocking up on art books, novels, and perhaps a mystery, you'll need a place to curl up and read.

Buzz Wine and Beer Shop
460 S. Spring St.; 1-213-622-2222
Right across the street from The Last Bookstore and a convenient place for the eager reader. A vast variety of wines and beers are available to taste, so belly up to the bar in the back of the shop, choose a beverage, and look even more hipster retro by opening an old-fashioned novel, in print. Old school!

The Los Angeles Public Library
630 W. 5th St.; +1-213-228-7000
This beautiful building looks more like a church or a mosque than a library. A Los Angeles landmark, its mosaic roof houses murals and sculptures from the 1920s as well as modern art. Charles Bukowski spent many days reading here when he was broke (and therefore sober). This is also where he discovered John Fante's Ask The Dust, an Angeleno tale, and his telling of the discovery is now the introduction to the book: "I had a library card. I checked the book out, took it to my room, climbed into my bed and read it, and I knew long before I had finished that here was a man who had evolved a distinct way of writing." The Los Angeles Public Library has given many aspiring writers a home. Walk up the majestic steps and choose any nook or seat and get lost in a story. Insider tip: Check out the Library Foundation of Los Angeles' ALOUD program online. The library theater has unique author readings and discussions that are usually free to the public.

The Beach
Santa Monica, Venice, Malibu, Manhattan Beach
When you've got it, flaunt it. Los Angeles has sunny weather and long stretches of soft white sand. Grab a beach chair, a towel, a picnic lunch from Joan's on Third (8350 W. 3rd St.; +1-323-655-2285) and head to Paradise Cove in Malibu. Surfers and sunbathing starlets make the perfect backdrop for reading Tapping the Source, by Kem Nunn, the National Book Award finalist that inspired the movie Point Break. 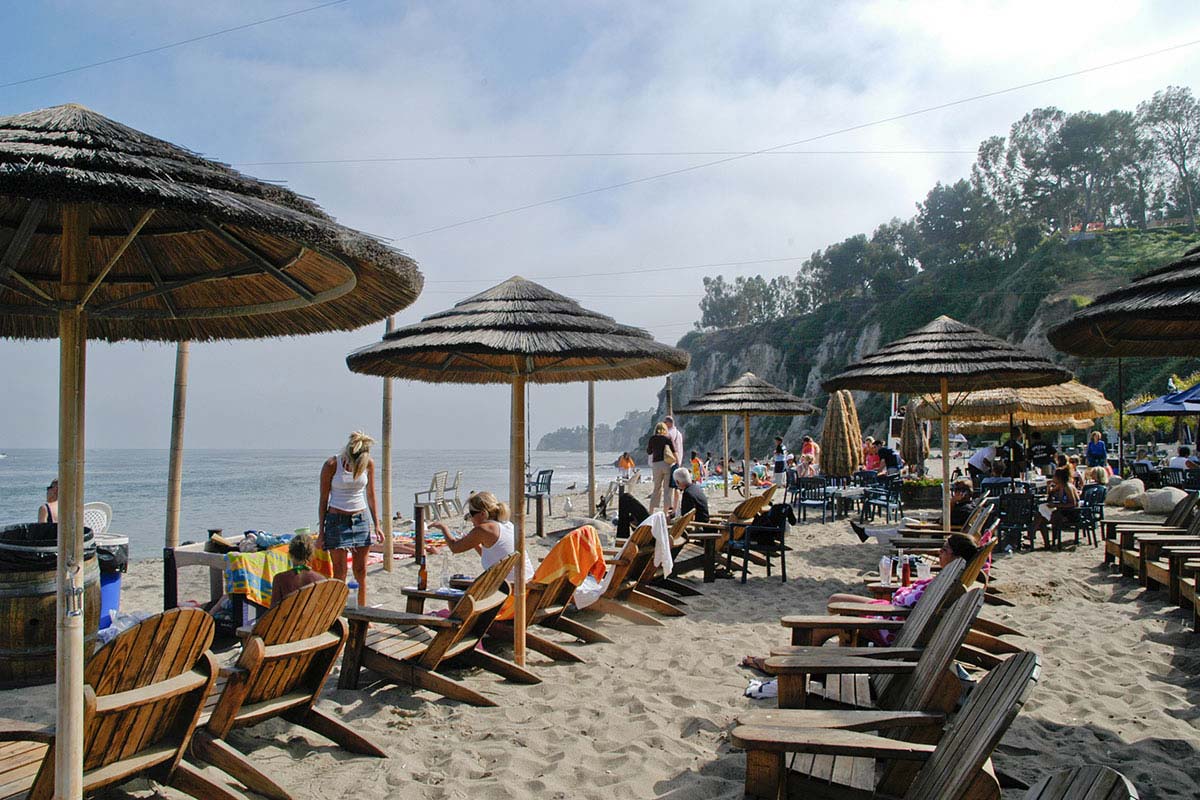 WHERE THE LITERARY CROWD GOES TO DRINK

Bukowski and Raymond Chandler were both prodigious drinkers in Los Angeles bars, as were Fitzgerald and Hemingway. LA has a reputation for being extremely health-conscious, but most respectable writers still drink.

Chateau Marmont
8221 Sunset Blvd.; +1-323-656-1010
The Chateau has always beckoned highly successful artists on the brink of self-destruction, and writers are no exception. Rumor has it that Nathanael West wrote the iconic Hollywood tale The Day of the Locust here. A.M. Holmes checked in to write Los Angeles: People, Places, and the Castle on the Hill, based on a stint living here. Jay McInerney stayed here while he adapted his literary sensation Bright Lights, Big City for the screen. Dorothy Parker and Hunter S. Thompson both wrote here — and likely drank even more. Algonquin Round Table wit Robert Benchley, who was terrified of driving, would routinely call a cab from the Chateau to deliver him home after a drunken night. He lived directly across the street.

Bar Bandini
2150 Sunset Blvd.
Be the first to drink at Bar Bandini, named after famed Ask The Dust character. Opening soon on Sunset Blvd in Echo Park and owned by writers of the comedic kind, I'm sure this spot will attract the jovial as well as the serious literary types. 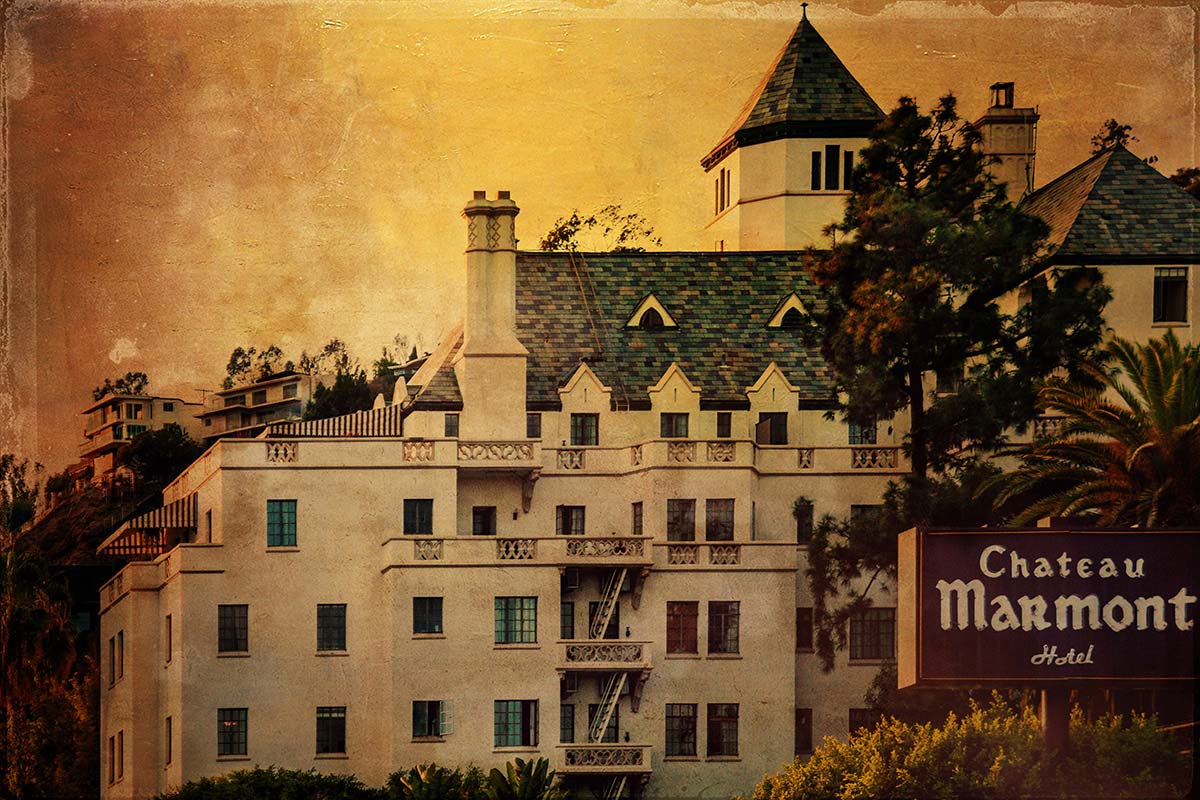 A mecca for self-destructive creatives. Photo by Mark Fugarino / Flickr. 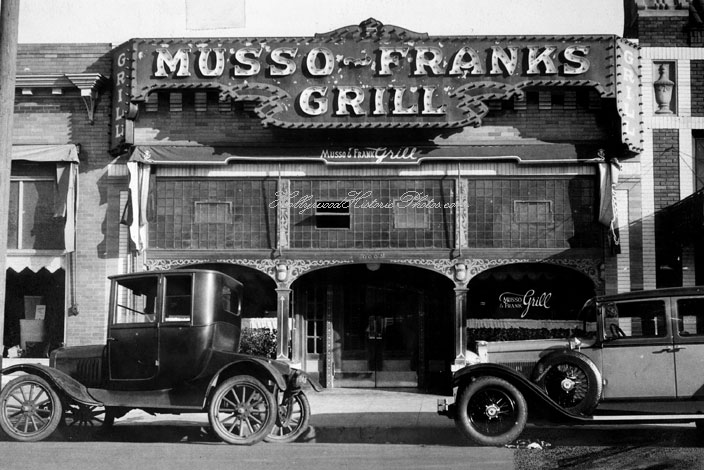 A favorite as it looked back in the day.

Redwood Bar & Grill
316 W 2nd St.; +1-213-680-2600
An amusingly kitchsy nautical-themed saloon. JFK drank here, as did brother Bobby and rival Nixon. But why? Because it was and still is right next to the offices of the Los Angeles Times. And no literary tour of Los Angeles would be complete without those ink-stained wretches. Though it has gentrified (slightly) and now features up-and-coming punk bands (occasionally), Redwood is one of the few old-school literary bars left standing in a sea of Downtown hipsterism. Rare Bird Lit publisher and book PR impresario Tyson Cornell comes here as much for the link with history as for the fact that his publishing office is a short walk away.

WHERE THE LITERARY CROWD GOES TO THINK

Many Angelenos simply go for a drive to think, as did Joan Didion's character in Play It As It Lays, but there are also many quiet places for reflecting and writing that don't involve movement.

The Griffith Park Observatory
The famous observatory, with its iconic architecture and, on a clear day, awe-inspiring views of the Downtown skyline below, lures many writers, artists, and athletes alike. Picnic on the grounds, go for a hike, or pop into the observatory to enjoy the exhibits and the planetarium. 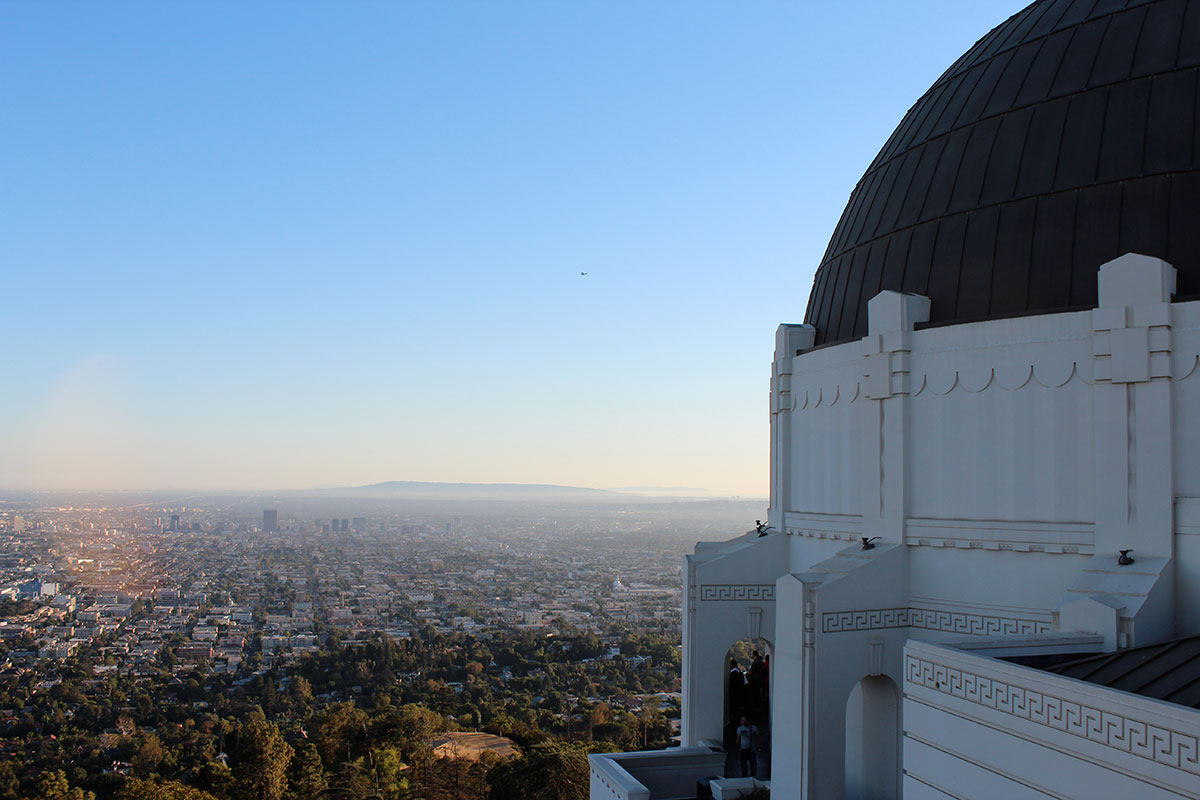 Bourgeois Pig
5931 Franklin Ave.; 1-323-464-6008
The most egalitarian, most eclectic "office" space for creative types was and still is the Pig. Vegan cookies, excellent coffee, and free Wi-Fi have drawn legions of writers for decades.

Soho House
9200 Sunset Blvd.; +1-310-432-9200
Say what you will about SoHo House — too fabulous, annoyingly exclusive — and it's probably true. That said, the owners made every effort to include L.A.'s bohemian literati at the expense of more famous, less hard working celebri-members. Enter the inner sanctum on a Tuesday at noon, and you will see little more than writers hunched over laptops, pounding away at that next great novel, script, or play.

Follow the Writers: Three Literary Tours of LA
For Your Bookshelf: The 12 Ultimate LA Stories
Fathom's Guide to Los Angeles