LAKE TITICACA, Peru – The trail of the slow-sailing motorboat is blazed head-first by a Peruvian flag flying proudly through clusters of totora, reeds that abound in the shallow section of the lake near the shore-side city of Puno.

The totora foreshadow our arrival to Uros, a self-sufficient island community constructed completely of the reed. I'm with my parents and my brother sailing on the Peruvian side of Lake Titicaca, South America's largest body of freshwater on the Peru and Bolivia borders. Uros is populated by lake-dwelling descendants of the 800-year-old Aymara tribe who became nomads on the waters in an effort to escape many long and brutal years of persecution by the Incas. Floating, stationary islands made of this wondrous reed provided them with a safer, more secure lifestyle, and they've stayed put since.

Aymara blood still runs thick through the veins of the Southern Andes, and the ancient dialect is spoken fluently and abundantly in the region. But only on Uros will you find a functioning, self-sufficient community of full-blooded Aymara descendants. 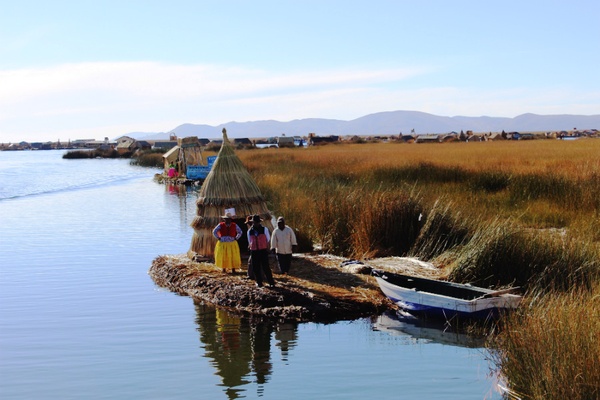 A warm welcome to Uros Island. 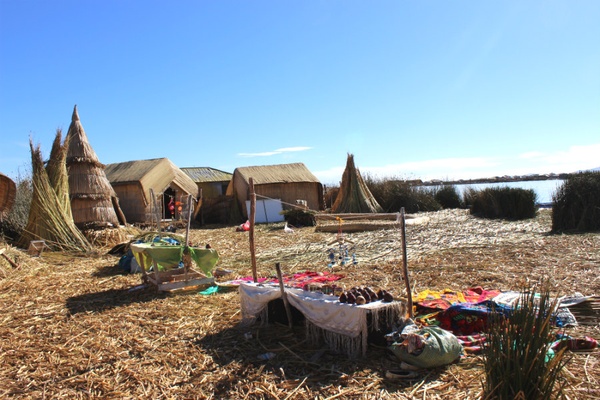 The bundles of reed grow bigger and more prolific until we are sailing within the confines of a centuries-old tribal community that it is literally afloat in the middle of the lake. The boat docks and we step onto the island. The floor beneath us, hand-built from totora, is both buoyant and crunchy, a thatch work of yellow tubes swelling upwards in various spots in the form of tiny straw huts. An Aymara family is expecting us.

The voice belongs to an Aymara woman named Rosa, small and plump and dressed in traditional colors and patterns. Two long, dark braids drape her back.

Before I can answer, I am sitting inside a miniature hut that is no more than a hollow outgrowth of the ground beneath it. The large bed that takes up almost its entirety is the only piece of furniture.

"My name is Rosa. This is my home," she explains in a thickly accented Spanish. It's obvious that this is her second language; it's mine, too. 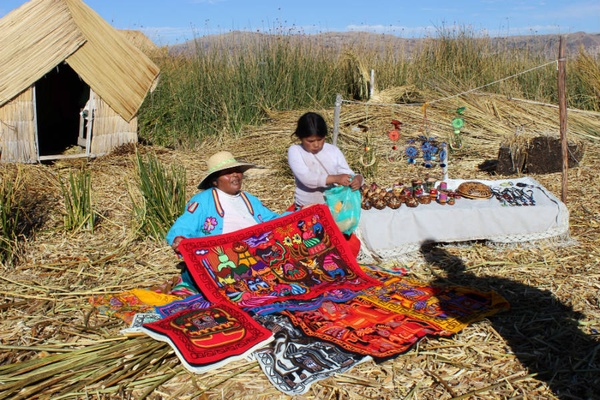 Rosa and her daughter sell hand-woven tapestries to enchanted tourists. 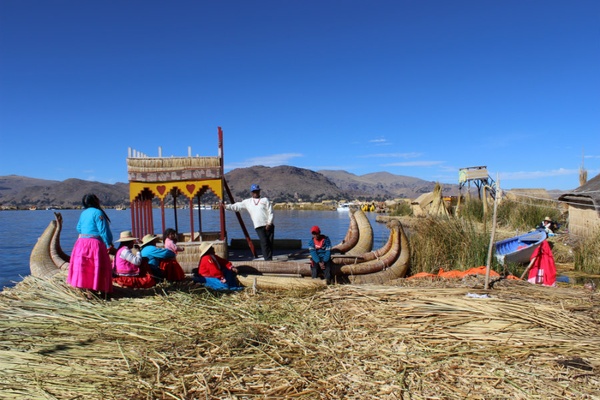 Aymara family hanging by the boat. 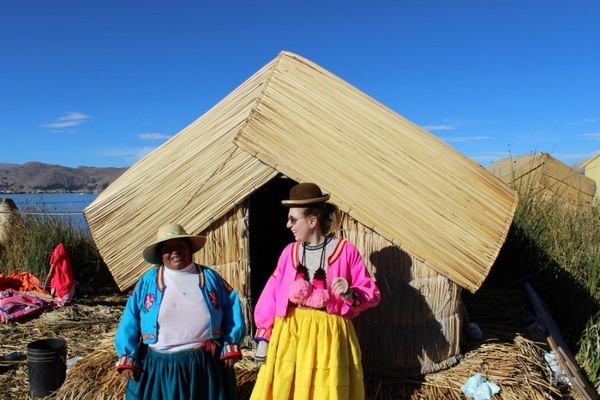 Rosa and I chat in our broken Spanish. She is the matriarch of the island. She makes a living by weaving tapestries depicting family scenes, Aymara tales, and ancient deities like Pachamama (mother earth) to sell to the tourists who visit her every day.

Rosa goes to Puno once a week to pick up bread and other necessary food supplies. She has four small daughters who attend a totora school on another totora island of the Uros community. She and her family travel by way of a two-story canal boat, composed entirely, of course, of totora. I learn all of this as she dresses me in the traditional patterned skirt and straw hat that hangs on the wall of her home.

Exiled to the lake as the only means to preserve their culture, this archaic community and its floating homes have become one of Peru's biggest tourist attractions. Tourists arrive by the hundreds daily. Modern-day Aymara families have wizened to the profitability of the industry, and we fall for their worthwhile trap. After a personal history lesson about how the island was constructed and the obligatory hand-woven tapestry purchase, we pay twenty nueva soles apiece for a canal ride in one of the reed boats to the island across the way. 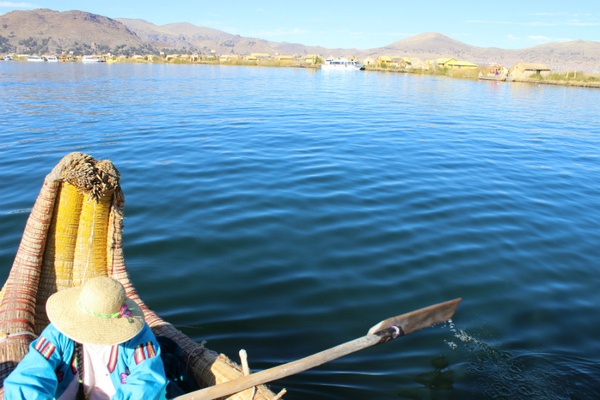 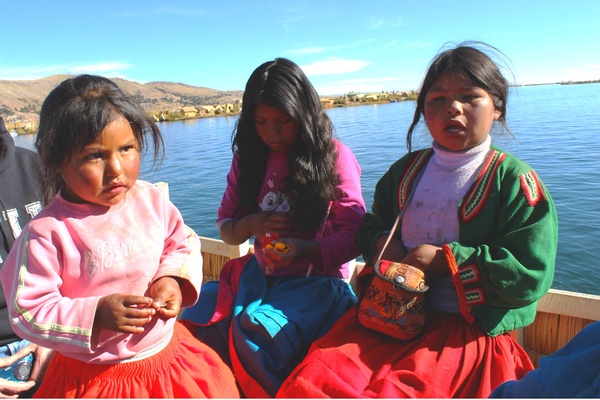 It's a singalong atop a totora boat.

Aymara children may be adorable, but beware of puppy-dog eyes: They are the island's best negotiators. After an innocent singalong atop the second deck of the totora boat, where the young girls show off their impressive knowledge of English, Spanish, Aymara, Quechua, Japanese, and Korean tunes, we are expected to pay up.

I return home from this piece of floating history with a handmade relic: a charming and colorful totora mobile of a boat steered by two happy sailors under a purple and orange sun (see photo below). It dangles from a string, floating and suspended in the air of my suburban home outside of New York City. It reminds me of a dream I once lived, sailing through the floating islands of a not quite lost world. 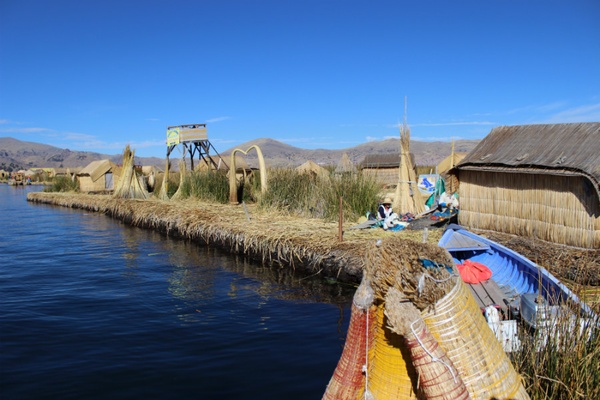 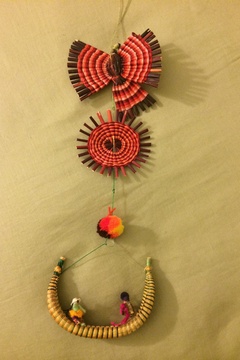 Fly direct from one of the larger airports in Cusco or Lima to the small domestic airport in Juliaca and catch an hour-long ride to Puno. (Don't bother spending any time in Juliaca. There's nothing to see or do, and it's not a pretty town.)

Drive from Cusco through the Peruvian Highlands with a tourist bus. We went with Wonder Peru Expedition, a great way to see the country. The six-hour drive is stretched into a ten-hour journey through the gaping Andes, with interesting stops at small village churches, scattered Incan ruins, and panoramic viewpoints. You'll see the most breathtaking countryside scenes.

It's best to set sail on Lake Titicaca during the Southern Andes' dry season, between June and August. September to May is rainy season — tropical storms occur daily, so it's not really the best time to visit. Be sure to hit the waters early, as sailing can go from smooth to choppy in the afternoon.

Calle Lima de Puno, right off of Plaza de Armas, is a pedestrian walkway of restaurants and tourist shops where you can dine on Peruvian classics and bargain for cheap Alpaca-wool products. La Casona and Mojsa are the spots for classy and traditional Peruvian dishes. Get tipsy on a traditional pisco sour, or try the regions famous purple corn-based beer, cicha morada.

Visitors of Lake Titicaca's Peruvian shores make their home base in Puno and spend most of their time exploring the lake. A weekend stay should be just the right amount of time. The lakeside Casa Andina Private Collection is a ten-minute cab ride from Plaza de Armas (it will cost around eight nueva soles to get into town). You can also spend a night on the lake on Taquile Island, where the last existing population of pure-bred Incas live and run a bed and breakfast, and watch the sunrise over the Bolivian Cordillera. But that's a different story.

Paint Me a Rainbow: 13 Beautiful Scenes in South America
Take to the Andean Mountains: Rio Sagrado
The Girl, The Gaucho, and the Andes Mountains