A medieval village in on the French Riviera. It sounds like the beginning of a romantic fairy tale. It is. Fathom founder Pavia Rosati checks in.

But I was unprepared for just how wonderful, special, tiny, and perfect Eze — and my hotel, the glorious Relais & Châteaux property La Chèvre d'Or — would be.

I was on the Côte d'Azur on a whirlwind tour (if you'll let me count a few days a "tour"), my first time in this part of the world in (ahem) 15 years, with more things to see than time to linger. But I don't mind traveling like a tornado, because one hour at the Prado is better than zero hours at the Prado.

I was driving and missed the left turn up to Eze because it looked like a driveway. I turned around in a parking lot packed with tour buses, which did not bode well for what lay ahead. I drove up, up, up a steep hill of narrow switchback turns until I hit a dead end. Turns ourt I had also missed the wrought-iron gates at the entrance of the hotel. More tourists to avoid hitting; another U-turn. I must have looked confused and annoyed, but it didn't last, as a nice porter materialized at my car window, relieving me of my car and bags to escort me up to reception.

What an entrance! The stone path was carved into a hillside landscaped with terraced gardens filled with plants, columns, and sculptures. So much to take in. A gold lion roared on a corner pedestal. A row of Chinese warriors guarded a balcony. A horse on the lawn ignored a lynx on the sloping hill. A stag glared at a crocodile across a fountain of dancing dolphins. Two ducks preened by a fountain. (This place was fun!) A staircase led down to a garden with a giant chessboard. Farther along was a swimming pool and an outdoor dining area where, I'm later told, they sometimes stage weddings. At this point, I'm about two minutes into the hotel property: These gardens are dense. Because the landscaping slopes down the hillside, everything overlooks the beautiful coastline, with views from Monte Carlo to the east, St. Tropez to the west, Corsica to the south on a clear day, Cap Ferrat jutting out in the middle. It's a big and meandering garden as whimsical as it is beautiful. 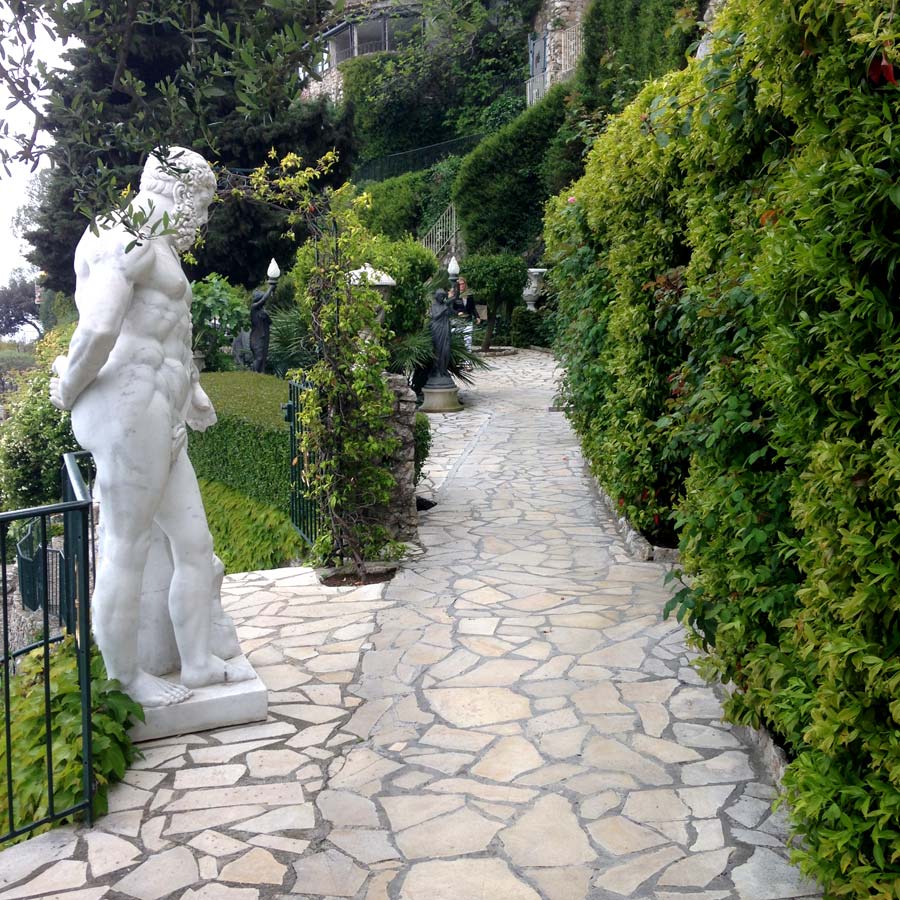 The entrance to the hotel.

To see it on a map, Eze lies inland. But when you're here, you feel like you're just uphill from the Mediterranean. I was reminded of Ravello on the Amalfi Coast, probably also because of all those garden statues profiled against the horizon.

I was led under an archway and through a tunnel under a few very old buildings. I emerged on a cobblestone street under another archway. Behind a heavy wooden door across from me was La Chèvre d'Or's reception.

This preamble set the stage for a very dramatic overnight stay. La Chèvre d'Or isn't so much in Eze as it is of Eze. There would be no running into other guests in the elevator or down a long hallway. The hotel — 38 rooms and suites, four casual and formal restaurants, one awesome medieval bar — is scattered across so many structures within the village that it didn't feel like I was staying at a hotel as much as living in a tiny neighborhood. My room was a two-minute walk from reception, behind a tiny wrought-iron door in a wall covered in ivy in a small town square. The decor was a modern take on traditional style — marble floors, a four-poster bed, lilac walls, a giant bathroom fitted with every amenity and a ginormous bathtub. But the showstopper was the wall of windows overlooking the valley and the sea. This was mine, all mine!

I set off on a meandering pre-dinner walk to explore the rest of the village. I saw beautiful Baroque choir stalls at Notre-Dame de l'Assomption. I read more Italian than French names on the tombs in the adjoining village cemetery. (This history of shifting boundaries.) I peeked into Château Eza. It's as romantic as promised if less grand than La Chèvre d'Or and also has rooms scattered throughout the village. The botanical garden at the top of the hill was already closed for the day. (I went back in the morning. I needn't have bothered, and neither should you, unless you're into cactuses on hillsides and bad sculptures.) 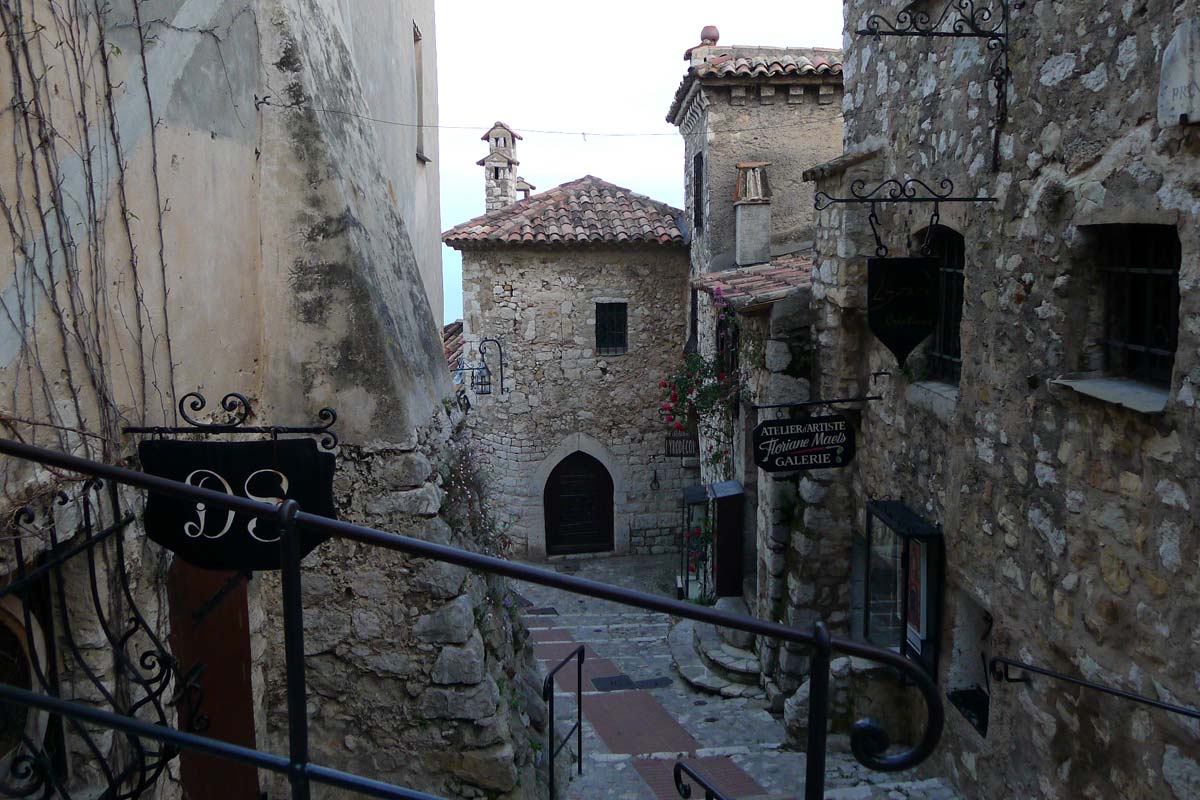 A typical street in Eze.

Because I arrived at 6 p.m. and left the following morning at 11 a.m., I missed the hordes of day trippers who flock here in buses and fill the tiny streets. But this was the way to do it. With the souvenir shops closed and nothing but the town itself to see, Eze didn't feel at all touristy. (Fathom's Erica Firpo invented #EmptyMuseo in Italy. I want to start #EmptyVillaggio.) It was easy to imagine what Eze felt like in medieval times. Not much has changed since.

I didn't need a map because Eze is no more than a few intersecting streets. At some point, I came down a staircase and ended up in a little square. The compass carved into the pavement looked familiar. I had, in fact, unwittingly ended up in front of my room. I felt like Eze really was mine, all mine.

A very abbreviated timeline of the village goes something like this: The stones in the hotel garden are as old as Jesus. Moorish pirates invaded in the 10th century. The Savoys ruled things until 1706, when Louis XIV sent his troops to demolish the hilltop fortress. It has been French since 1860.

The story of La Chèvre d'Or is a study in mythmaking. It begins with a little old lady who lived in a cottage and tended to her goats, selling their milk and cheese, stashing her gold coins in the surrounding rocks. Years later, a visiting Yugoslav violinist saw a goat with golden fleece (the namesake "chevre d'or"), who led him to the cottage, where he found the gold coins. He took the money and built himself a house that a gentleman named Robert Wolf bought in the 1950s and turned into a restaurant. Walt Disney came for a visit, stayed a few months, and suggested Wolf turn it into a hotel. Thus began the long process of acquiring neighboring buildings to convert into guest rooms and hotel spaces (spa, business center, restaurants). The hotel now owns about half the village. You can imagine that available real estate doesn't come easy around here, especially considering they only buy rooms with views of the sea.

A MEAL TO REMEMBER

I made my way to the bar — a medieval fantasy of fuchsia and purple velvet armchairs with heraldic banners hanging on stone walls and a suit of armor in the corner — for a glass of Champagne on the terrace. I walked around L'Eden, the hotel's casual restaurant, notable for its striking indoor pool.

I was tempted to take a dip, but I was on my way to dinner upstairs at the two-Michelin star restaurant, also named La Chèvre d'Or. The dining room is formally decorated in shades of cream, the better not to distract from the wall of sea-facing windows (all the décor anyone needs) and the meal in front of me — a parade of dramatic, colorful, inventive, exquisite dishes. I had nine courses, with wines to match each. I was dining alone and I could not have been more coddled by Guillaume, the maître d', and Claude, the sommelier. Both managed to be French and formal (expected) and cozy and hilarious (unexpected).

My meal began with three bites of amuse bouche: avocado sponge with granny smith apples and tapioca, red pepper marshmallow with olive puree, and a carrot orb filled with vanilla. They were served on a small disc that fit within the circular charger. The waiter used a special two-pronged fork to lift the disc out when it was time to change plates. Simple, inventive, striking.

The courses followed were all typical of the kitchen's style of using Mediterranean ingredients with classic French techniques and dazzling presentation. Goose barnacle on a buckwheat tuile. Asparagus with white asparagus, black truffles, hollandaise with hazelnuts. Scottish langoustines with green anise ravioli. So much texture in everything. Rouget stuffed with black olive puree served alongside the showstopper: an octopus braised in red wine shaped to look like a sea horse. A sea horse!

Claude's wines — all whites, per my request — were new to me and wonderful. To my disappointment, he told me I'd never be able to find any of them in New York City. If you ever encounter a 2012 Domaine Vaisse Hasard Blanc Pays d'Herault, please buy a case and send me a bottle. 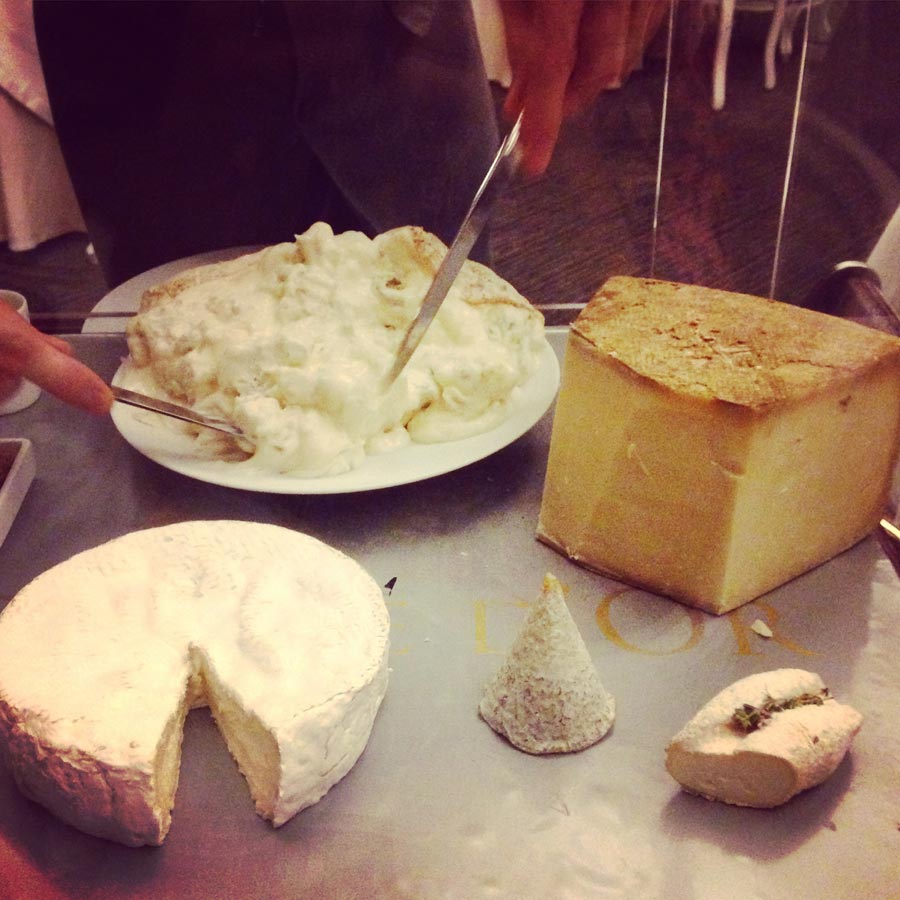 On to foie gras with parmesan sauce and a brunoise of artichokes. How can anyone chop anything into such small and perfect squares, I wrote in my notebook. Beef that had been dry-aged for 90 days in Spain (in France, aging that long is illegal).

This was the moment when the next table got up, apologized for being noisy, and gave me their plate of chocolate bon-bons. There was nothing to apologize for. I love a rowdy Scottish birthday dinner.

The cheese cart was grand, and I rose to the occasion. I couldn't possibly eat dessert, so of course Guillaume served me dessert — a lemon cake in the shape of an actual lemon. In the Middle Ages, great chefs loved to play tricks on diners, disguising food as into different shapes.

After dinner, I walked through the cobblestone streets back to my room and tumbled into bed. I was too sleepy and sated to take advantage of the bathtub with views out to Monte Carlo, but I opened all the doors and windows and fell asleep to the timeless lull of Mediterranean breezes. 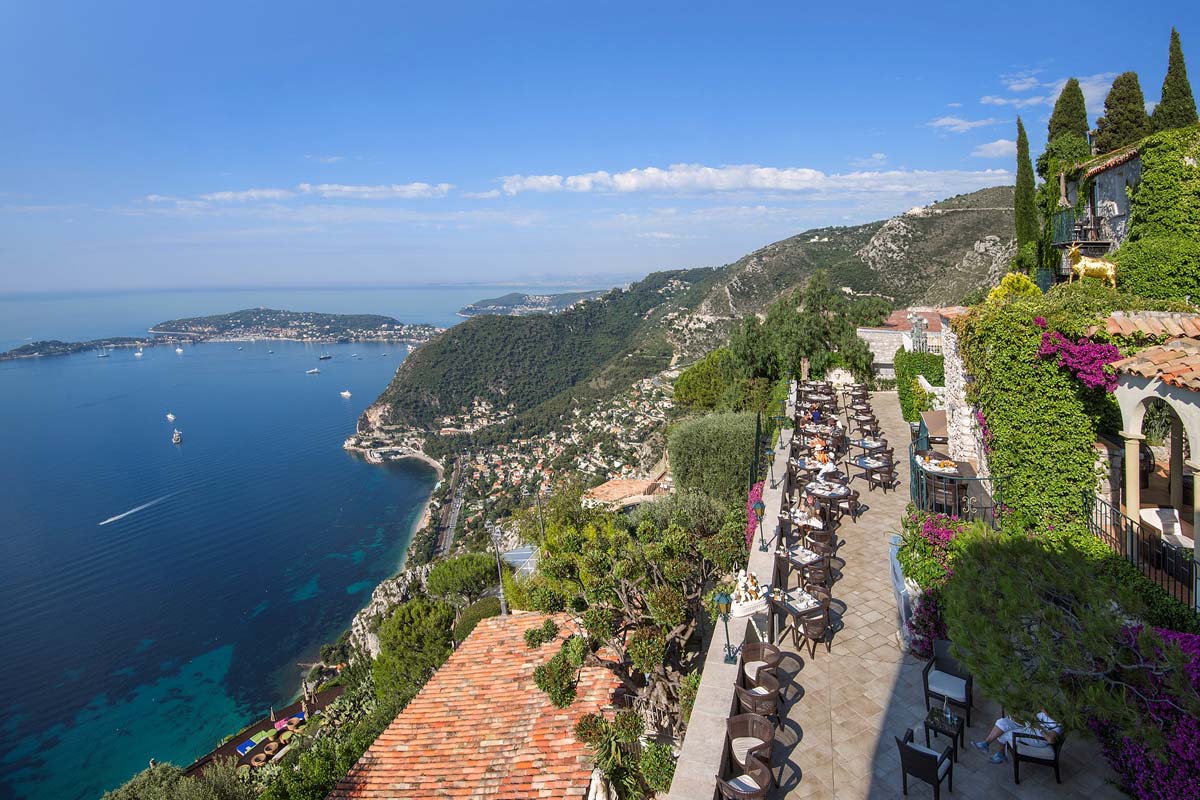 The view from the terrace. Photo courtesy of La Chèvre d'Or.

Fly: Nice Côte d'Azur International Airport (NCE) is 18 km away; the Nice train station is 10 km. A car is handy for exploring this part of the world.

Eze is an easy day trip from Nice and Monaco, but Eze is lovelier than either of those towns.

THIS PLACE IS PERFECT FOR

Romance, romance, and generally forgetting the world (in all its drudgery) you left behind. I stayed less than 24 hours, which meant I got to avoid the tourists, which was so nice. But you could easily spend a few days here in happy isolation with a book by the pool or on the terrace. It's not a great place for small children.

The hotel is closed for the winter from mid-November to early March.