Born and bred New Yorker Caitlyn Slivinksi shares a firsthand account from the inside track at one of Kentucky's most prestigious horse races.

LEXINGTON, Kentucky – Lexington and Keeneland have telling mottos: "Horse capital of the world" and "Racing as it was meant to be," respectively. My tagline for a weekend trip to Kentucky was "ponies before phonies." A weekend at the racetrack was on the horizon, and I was lucky enough to have a Lexingtonian friend show me the ropes.

OFF TO THE RACES

Keeneland is a racecourse famous for the Bluegrass Stake, whose winner advances to the Kentucky Derby in Louisville. For two days I was at the track taking in the scene and trying to pick the winner.

The best way to prep for the races is to drink bourbon for breakfast and to dig out your Hermès pocket square. It's a dress-to-impress affair, but there are no fancy hats. Hats are for the Derby, so while I did spot a few fascinators, I was advised not to don one myself.

Driving up to Keeneland was a dream. White picket fences led to a long tree-lined driveway. Valet swung the door open (never mind that we were eight Yankees in a car, two of whom were grown men squished into the trunk). My gracious hosts, lifetime members thanks to ancestors who were on the 1936 founding board of Keeneland, distributed tickets and ushered the group into a decadent dining room — right to the best seats in the house overlooking the paddock. My eyes darted between the stunning horses getting saddled to my left and the beautiful people brunching to my right.

It was unseasonably cold that weekend, and when hail started pouring out of the sky around 3 p.m., bouncing off the backs of horses and jockeys, I was even more delighted by our cozy indoor perch. There is more indoor space besides the clubhouse, but it's drastically different — fashioned with cement flooring and a greasy food court. Here, spectators can BYO-lawn chair and set up shop in front of TVs. I loved the clash of these hardy concrete jungle-ites with the highbrow socialites in seersucker. The day was a huge success and we retired back to the house in preparation for round two. 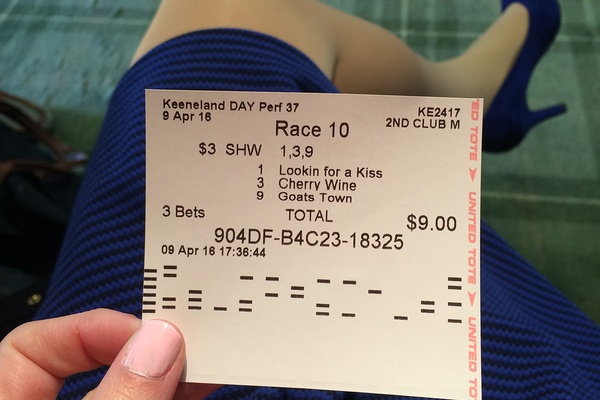 Betting on race horses at Keeneland. 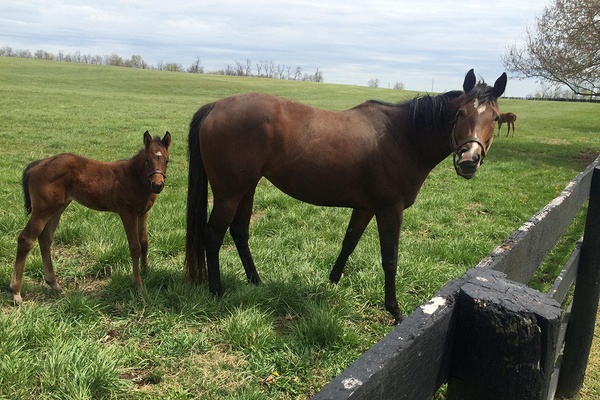 A mare and her little one.

Day two of the races started out at a more leisurely pace. North Lime, the town doughnut shop, has nine delicious flavor offerings, including the more adventurous blueberry lemonade. The line out the door meant the little glazed wheels must be worth the wait, so my friends and I queued-up and walked out with a pizza box-sized package of treats and iced coffees 25 minutes later.

Back at Keeneland, I spent the afternoon fluttering between the bar, betting window, and the box seats outside. Horses named Sorry For Nothing and Looking for a Kiss were the topic of conversation and made nice hashtags for Instagram.

A NIGHT ON THE TOWN

Later that evening, I paid a visit to Pepper Campus, an industrial patch of land revitalized by trendy breweries, restaurants, and ice cream shops. Of course I tested out all three categories.

A husky named Shadow met me at the door of Ethereal Brewing Co. along with aromas from the craft brews being sloshed into various glasses. Next time I want to try the taco stand in the back.

On we went to Middle Fork Kitchen Bar, where my group sat at a long, skinny table and feasted on chimichurri steak, whole roasted chicken, and rabbit ragu. My favorite dish was Thai peanut butter and jelly served alongside toasted baguette with lime-orange jam and ginger peanut sauce — a very creative and unexpected combination.

Once stuffed to the point of discomfort, I quite illogically waddled over to Crank & Boom Craft Ice Cream. Just as I formed the words, "I don't think I have room," the whiff of waffle cone convinced me otherwise. Before I knew it, I was sitting in a booth with a brownie sundae.

With a flight home looming in the distance, I took advantage of the day by heading to the farm where my host grew up. Horses and their foals lined the fences for a nuzzle, so I obliged, ungrudgingly. Since my friends and I had already stopped at Sportsman's Warehouse earlier in the day, we were loaded with ammo and clay pigeons and ready for the next adventure.

There's nothing like the recoil of a 20-gauge shotgun to wake you up in the morning. After several impressive shots and the shattering of clay all over the farm, I'd worked up an appetite. And there was only one place to go: Indi's Fast Food Restaurant for real-deal Kentucky fried chicken. Fifty wings were perhaps too many for four people who also ordered piles of macaroni and cheese, potato wedges, and containers of beans, but I can't think of a better way to be sent off to the airport than with gunshots ringing in my ears and a fried chicken swimming in my arteries.