In Fathom's book Travel North America (And Avoid Being a Tourist), there is a whole chapter dedicated to taking it nice and easy. It's called The Joy of Slowing Down, and it's a method, a mantra, and a movement. You can get a taste for it in the excerpt below.

Botanical landscapes are best when dreamed up by poets, artists, and eccentrics.

Tucked away on a 16- acre (6-hectare) reserve at the end of Long Island, textile designer, author, and collector Jack Lenor Larsen built his home and sculpture gardens, “as a case study to exemplify a creative approach to contemporary life.” Visitors may take their time roaming the grounds to experience landscaping and architecture as an art form (flowering ornamental borders, canopy of deciduous trees, 7th-century- Shinto-shrine-inspired home). Sculptural installations (by Buckminster Fuller, Yoko Ono, Kara Walker, and Willem de Kooning, among others) surprise and delight when juxtaposed with nature. It’s intimate and innovative, a veritable playground for those seeking creative inspiration.

A group of surreal fantasy structures more than 2000 feet (610 meters) above sea level, created by artist, poet, and surrealist supporter Edward James in a subtropical rainforest in the mountains. A labyrinth of paths and living walls leads to pools, waterfalls, nonsensical doors that open to nothing and towering staircase structures that lead nowhere.

Read more on Fathom: Lost in a Dream in the Surrealist Garden of Mexico

An antidote to the meticulously manicured resorts on the island, this place is lush and overgrown, with an ancient sinkhole that is now a wonderful home for royal palms. There are plenty of hideaways and antique stone benches for taking in the trees, birds, wind, and classical music wafting from the horticulturalist’s home – which you are invited into, and is filled with wildlife, old furniture, and a tuned piano for guests to play.

Tropical paradise with a raucous backstory. Do not skip the two-hour guided tour of the outrageously creative garden, which served as living theater for an architect-and-artist couple who built outdoor “rooms” to host wild, hedonistic parties for notable visitors to their particularly stunning slice of oceanfront. There are exotic water features, sculptures, and unbelievably giant plants – like the Moreton Bay fig trees with their humongous roots (made famous by a Jurassic Park cameo).

Olmedo was a fabulously successful businesswoman who hoarded a treasure trove of folk art, pre-Hispanic artifacts, and one of the world’s best collections of work from Frida Kahlo and Diego Riviera (scandalous backstories included) in a rambling 16th-century hacienda at the southern edge of the city. The grounds are inhabited by a wild mix of colossal agave plants, colorful dahlias, tons of strutting peacocks, gnarled cypress trees, and a pack of rare hairless xoloitzcuintli dogs, one of the most ancient breeds on the continent (highly regarded by the Mesoamericans 3500 years ago).

When a 1000-plus acre (400-plus-hectare), 18th-century Quaker farm became a private residence circa 1906, it also became a canvas of sorts for owner and industrialist Pierre S. du Pont, who drew inspiration from the world fairs he attended across the country. One such brainstorm yielded an enormous pipe organ (it took fourteen railway freight cars to transport), which, when played, can be heard throughout the conservatory greenhouse. There are surprising vistas at every turn, plus native wildflower fields, a water garden, elaborate fountains (du Pont loved water features), and a 60-foot-tall (18-meter-tall) carillon, a musical instrument normally found in bell towers, that plays its sixty-two bells in concert for visitors in the summer and fall.

In the early 1900s, a Sicilian immigrant and citrus grower, following the beat of his own drum and trying to escape the oppressive Central Valley summer heat, turned farmland into catacombs: a vast network of subterranean tunnels, Romanesque arches, courtyards, and rooms. The excavation – all done by hand with shovels and picks – lasted forty years, spanning 10 acres (4 hectares) and going 25 feet (8 meters) deep, planted with fruit trees, shrubs, and grape vines. 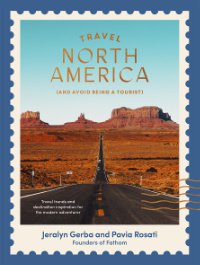 Buy Travel North America (And Avoid Being a Tourist) from your preferred local bookseller or online from Amazon.com or Bookshop.org.

Excerpted with permission from Travel North America: (and Avoid Being a Tourist) by Pavia Rosati and Jeralyn Gerba, published by Hardie Grant Books, June 2021.

Everything on Fathom is independently selected by our editors. (Especially our own book.) If you shop through a link on our website, we may earn a commission.