While we're all aware of the crisis facing refugees of the Syrian Civil War, few of us really know what life is like for the displaced population. Kate Eberstadt has an idea. She's a visiting artist at The American Academy in Berlin and the founder and musical director of The Hutto Project, a refugee children's choir in an emergency camp outside the city. Fathom's Daniel Schwartz got on the phone to talk to her about her impressions of the camp and her mission.

Tell us about The Hutto Project.

The Hutto Project is a creative music program for asylum-seeking kids stationed at an emergency refugee camp in southwest Berlin. With help from volunteers and guest artists, we provide space, time, and musical instruction — 90 minutes, three times a week — for children ages three to fourteen from Syria, Iran, Iraq, Afghanistan, Palestine, Moldova, and Vietnam. We're composing and rehearsing an original work that will be performed at a public concert in Berlin this spring.

Love it. But why a children's choir?

My friend Sophie, who was volunteering at a camp in Berlin, told me that while Germany was providing material resources like school supplies, none of the kids at camp were actually in school. They were running around all day, which, as you can imagine,  only heightened already high tensions in the makeshift communities. I began thinking of ways to help.

At the same time, Benjamin Hutto, my high school choir director, fell ill, and I reflected on his impact on my life. When I was a shy freshman, he pushed me to join the co-ed choir and taught us the value of working together toward a shared goal — a value that lies less in the action of singing and more in the structured time. It was what I enjoyed most at school, and it was how I made friends.

While NGOs like UNICEF come into big camps and lead short, one-off sessions for children, The Hutto Project is about providing consistency within a classroom setting, fostering self-expression, and building bridges between cultures that otherwise have trouble communicating. When days are free-form, chaotic, and random, even the smallest dose of structure can make a big impact. 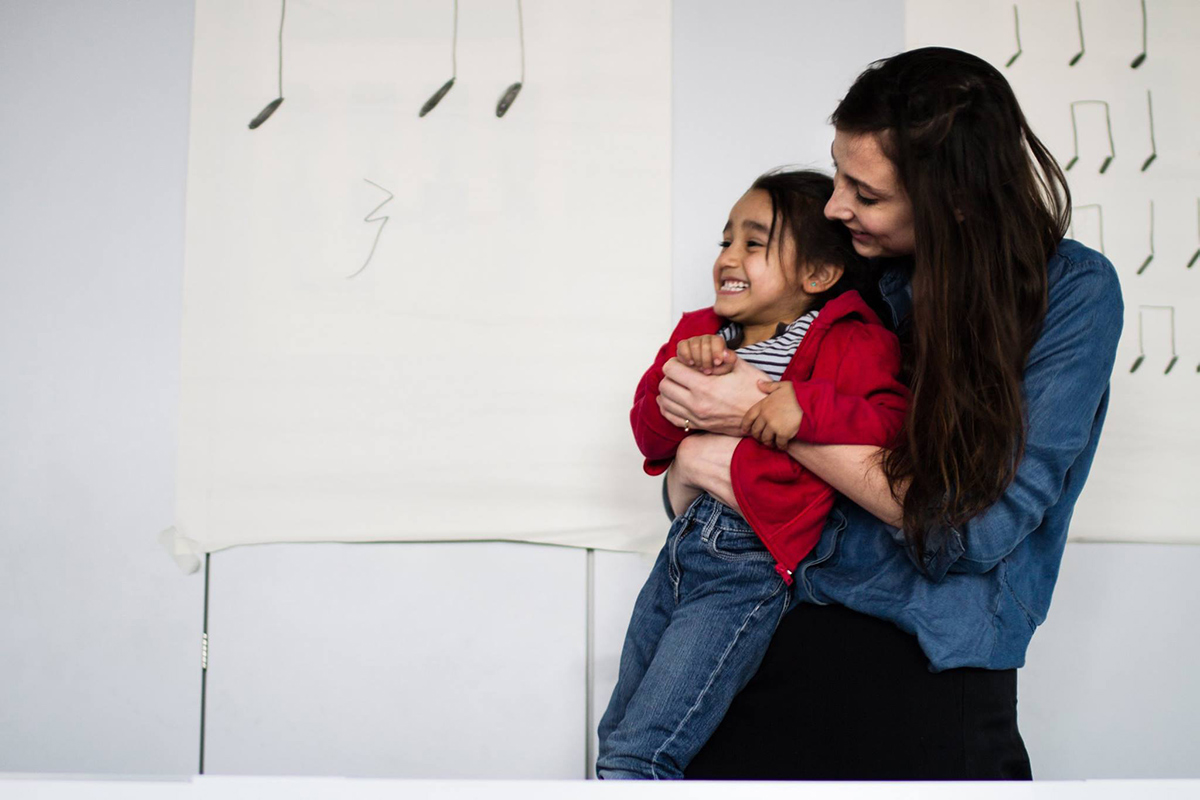 Founder Kate Eberstadt inside the classroom. 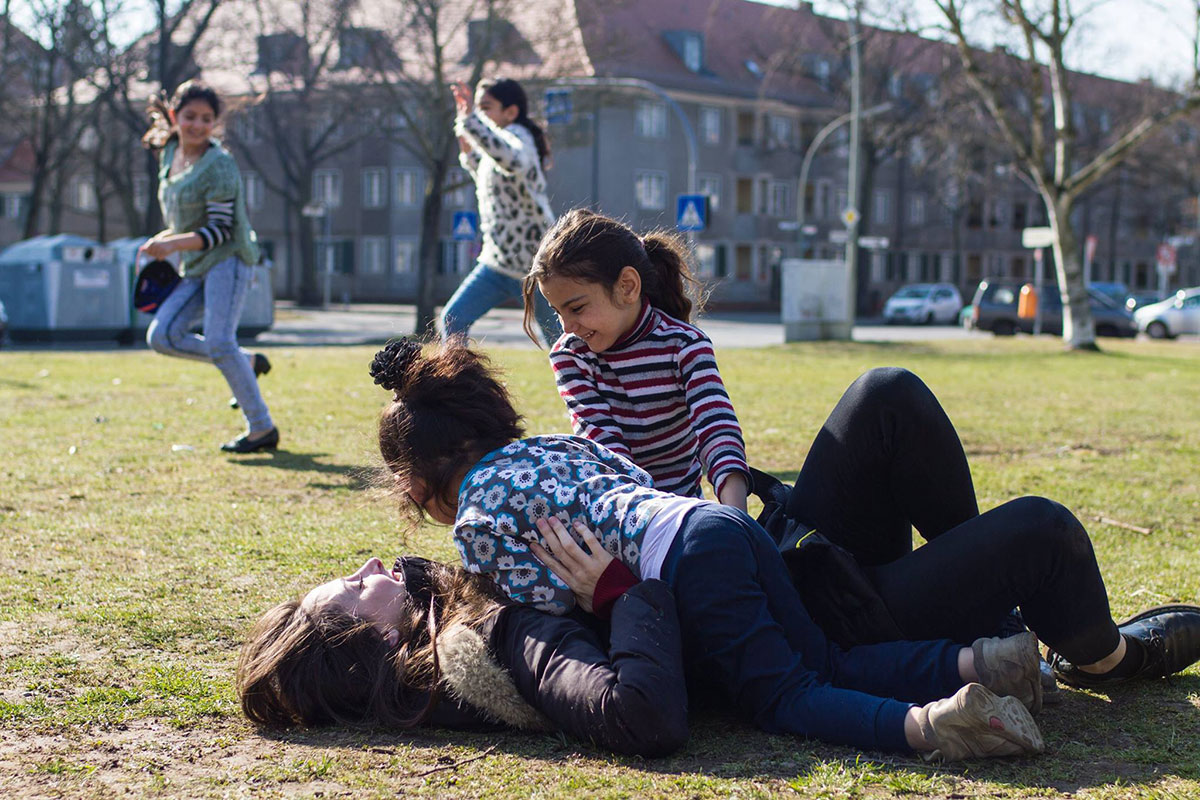 Kate and her students playing near the refugee camp. 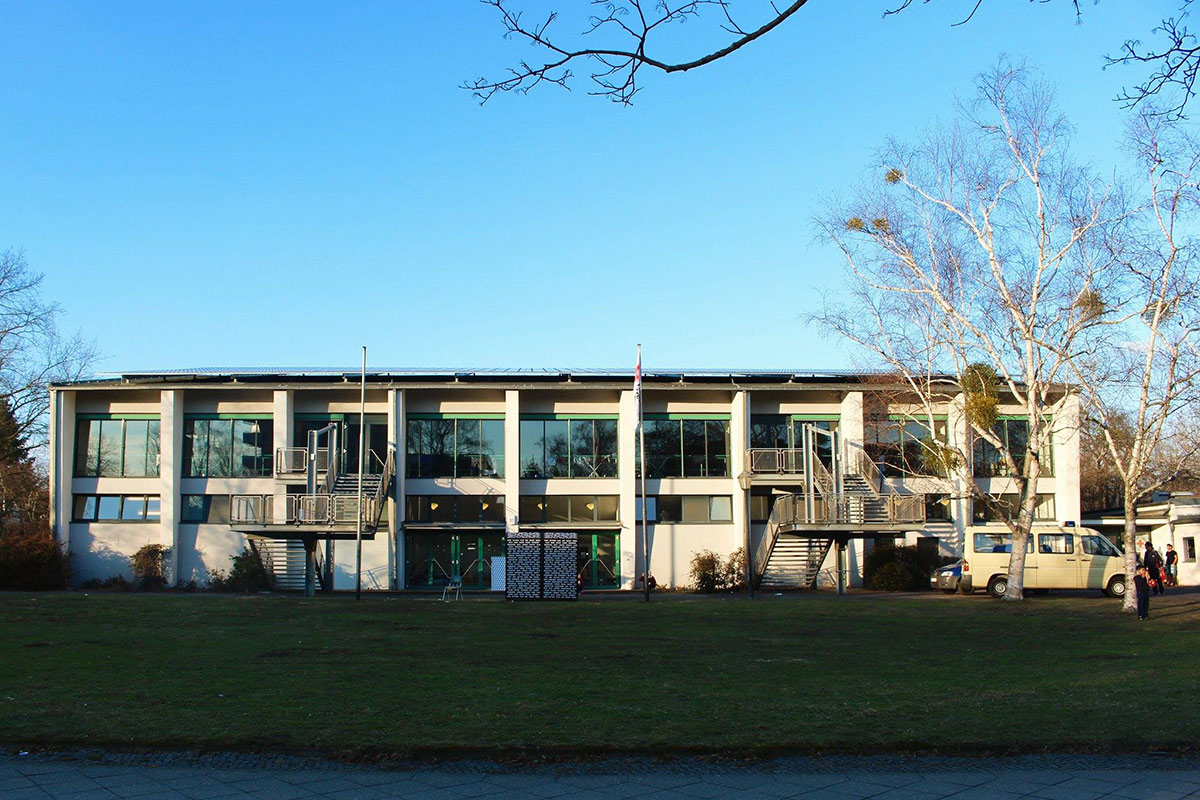 The exterior of the refugee camp, formerly a public gymnasium.

This shy guy can totally relate. How did you get this off the ground?

The Hutto Project was my residency proposal to The American Academy in Berlin. Once approved, the idea quickly took on a life of its own, attracting friends and artists I worked with from a previous residency at Watermill Center in Upstate New York. Our team now consists of four full-time members, two part-time members, and temporary volunteers from around the world.

After raising funds through a crowdsourcing campaign (for administration, instruments, and supplies), we chose a camp in a non-residential sports complex on the outskirts of Berlin. Camps like Templehoff house thousands of people and attract the attention of larger service groups, but this camp is small and is managed through government funding by The Red Cross. They generously lent us classroom space in their office building around the corner. When we began looking for participants, we were met with interest — 26 of the 44 children in the camp joined our first class.

Amazing! Did you anticipate such a positive response?

I'm a single, 24-year-old female. I had no idea if I would even be taken seriously. So it surprised me that parents were soon asking the camp director if I would run an adult choir! Once a week, local volunteers take kids to the gymnasium next door to run around and play on an obstacle course. But other than that, it's every kid for him/herself. There's a lot of mania and agression. 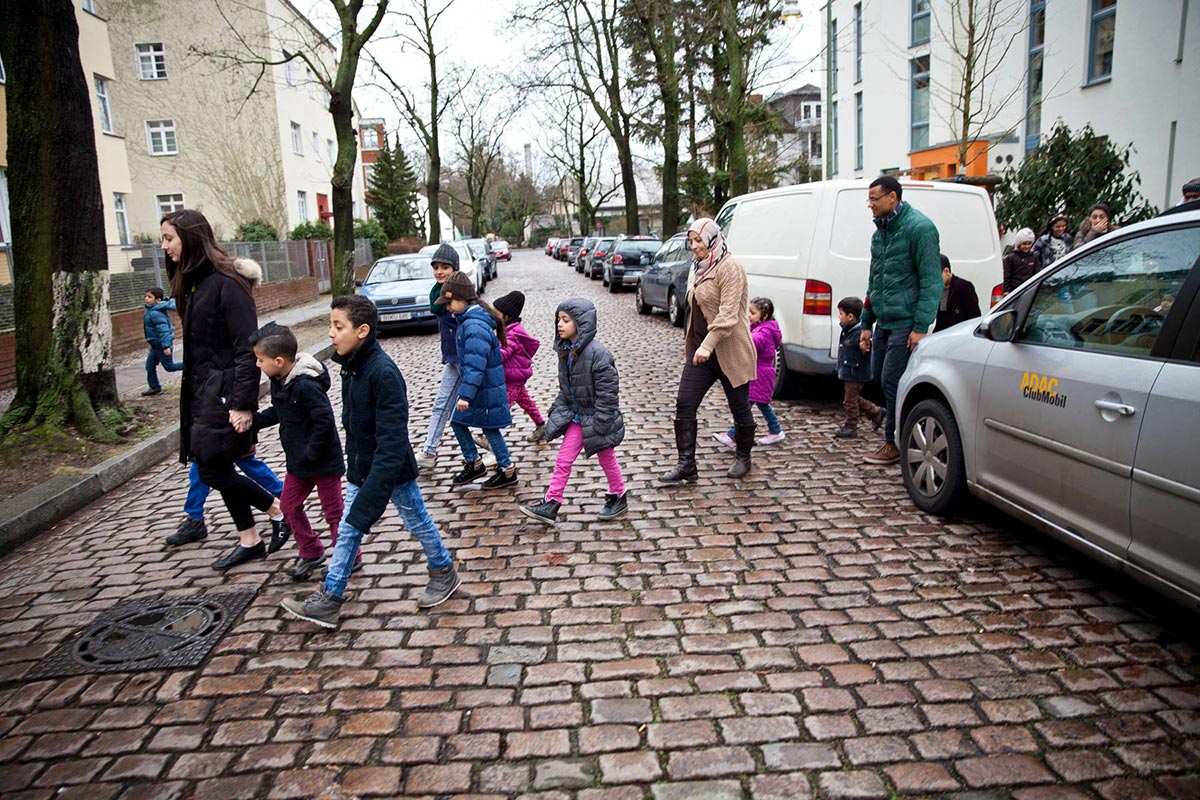 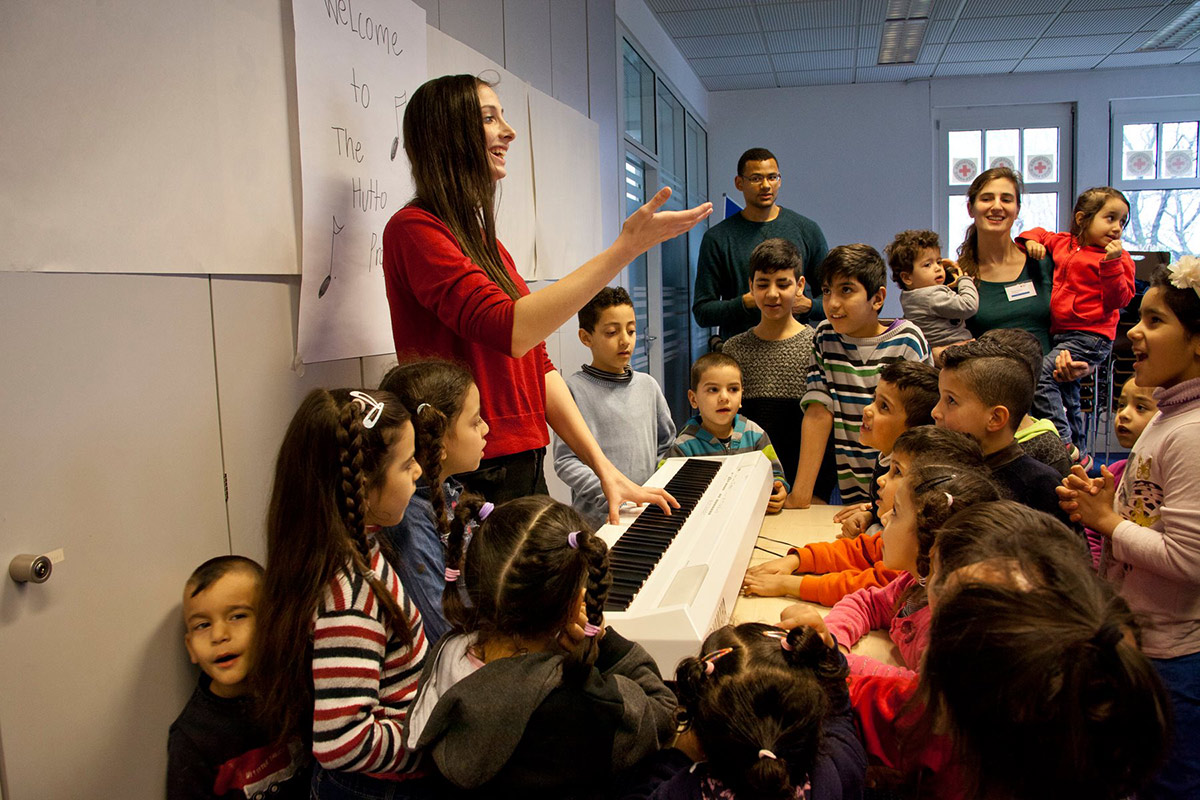 Kate and her students. 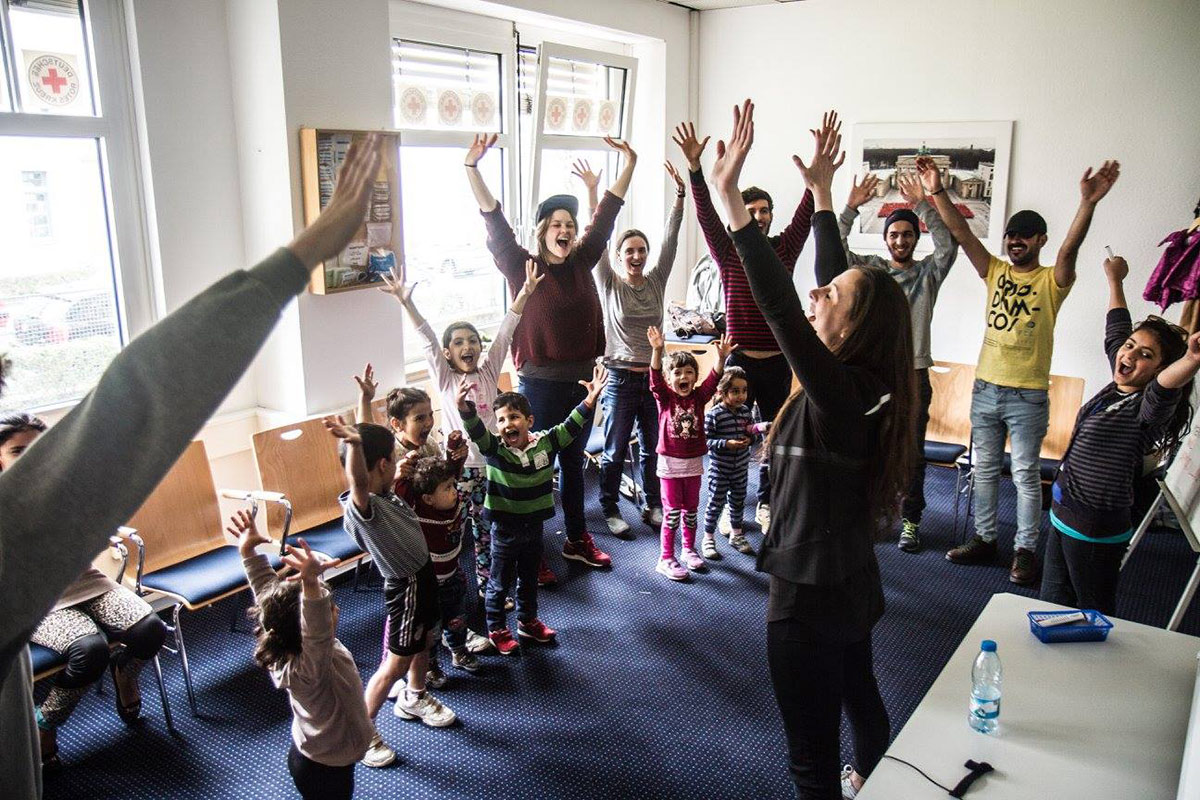 Between two and five instructors (sometimes more with volunteers) lead rehearsals that began with 26 students. Now we average between twelve and eighteen per session — seven have left the camp, and sometimes children join their parents on bureaucratic day trips. But we never know whether absentees are temporary or permanent and, as teachers, that's hard to cope with. We focus on making the most of our time together because we don't know who will be gone by the next session.

We're composing our performance as we go, exposing the kids to as much as we can to see what interests them. Our friends at Notes and Keys, an a capella group from Columbia University, sang and gave music lessons. Guest artists have led movement workshops. One of the most popular activities is something we call a mirror exercise. It's great because it allows kids to interact positively by miming each other in front of the class.

Rehearsals were crazy at first (kids running around punching each other!), but they've gotten better. Regardless of how they turn out, we're trying to set up a situation where kids know what to expect. On rehearsal days, we pick up the kids at 2 p.m., walk to class, and rehearse. Afterwards, we play soccer, draw, drink tea, have snacks, and get them back by 6 p.m.

Imagine 200 people from seven countries packed into one bedroom. A bedroom that's a public gym with almost no staff — two social workers, two assistants, one cleaner, one maintenance guy. There are no private bathrooms, showers, or living spaces at all. Families are fed three meals daily. Adults are given €130 monthly. They can spend one night away from camp or save their pensions for short trips, but they risk losing their sleeping spaces to incoming refugees.

Stuck at camp with barely enough money to live on, refugees are dependent on the German government. That's frustrating. When people say refugees are lucky to be in Germany because they've never before seen so much money, they don't realize that these are the people that had enough money to make it to Germany in the first place. They're intelligent and competent, and now they're being looked upon as moochers and savages. It's terrible.

How do refugees spend their time?

Parents are back and forth with government meetings, so free time varies. Some get depressed and stay in bed. Others are active and organize soccer games or make quick runs into the city. Those with smartphones play games around the hotspot, while those without, like older Farsi men, play cards in the corner. There's cigarette smoking out front, no alcohol, and no drugs (though I've heard stories). There is usually someone smoking a hookah.

Children jump out of windows, unsupervised all day. Teenagers play foosball. There's a shower room with no showers and a room that men can't enter where women of all ages hang out and use as a place to refresh (brush each other's hair and do each other's makeup). From my experience, there's no animosity when you're getting groomed.

That said, clashes between cultures are not uncommon. Personal vendettas are inherited, and kids often turn to violence to deal with their problems. Fist fights dissolve quickly (when it's over, it's over), but verbal insults never stop. One day, an all-out brawl consumed the camp after it was rumored that a Farsi-speaking 15-year-old punched an Arabic-speaking 4-year-old. Who knows if that's true! But vendettas can start from hearsay. 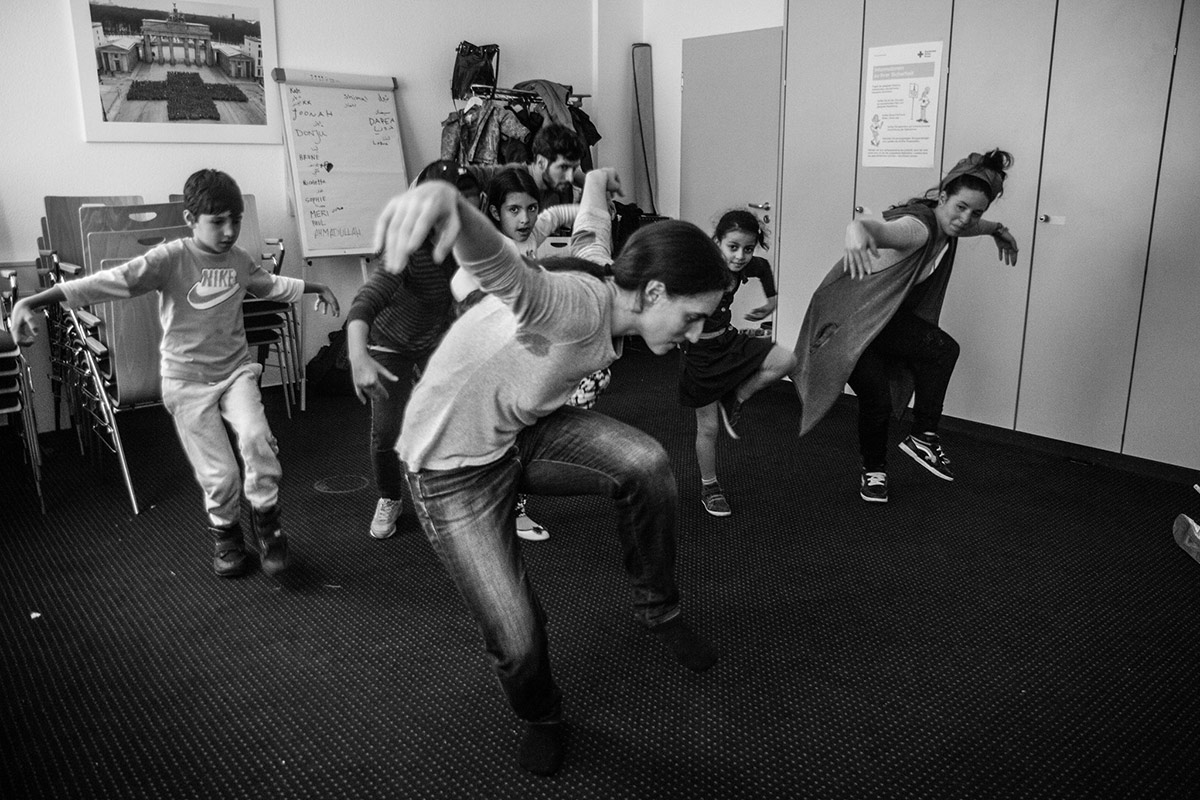 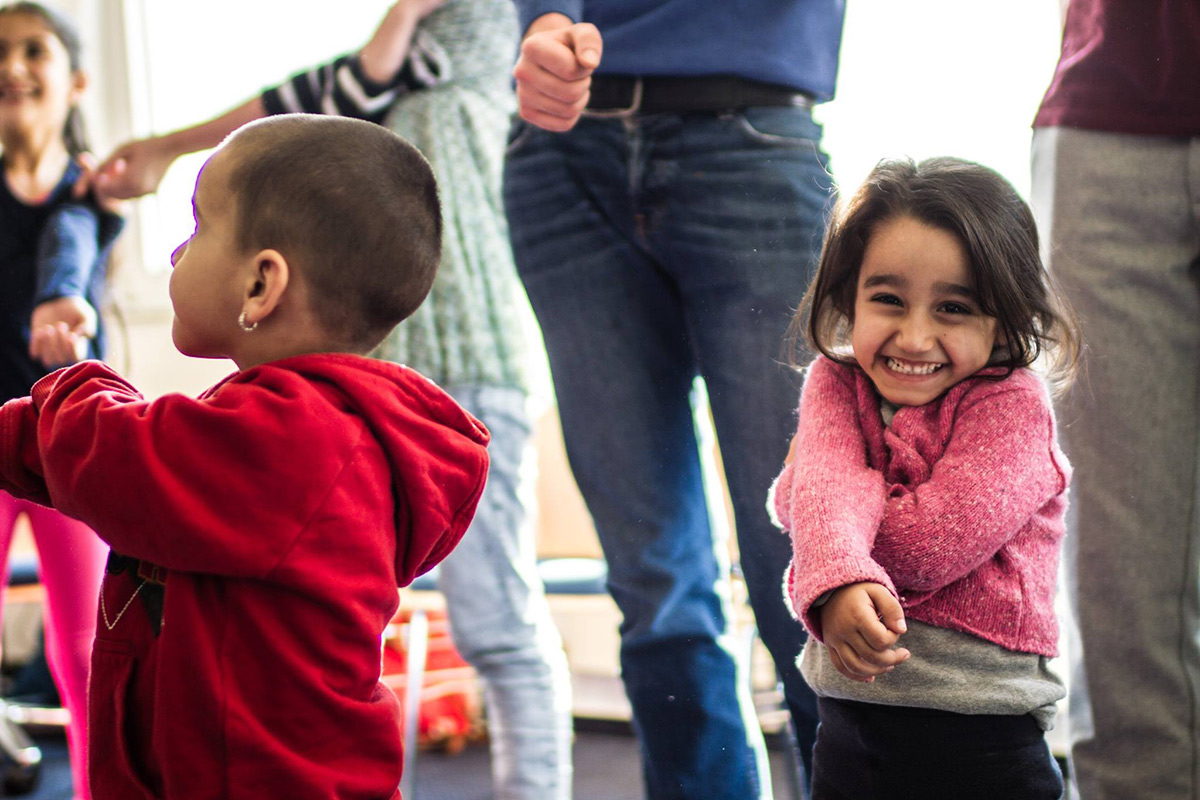 Horik and Mirna warming up. 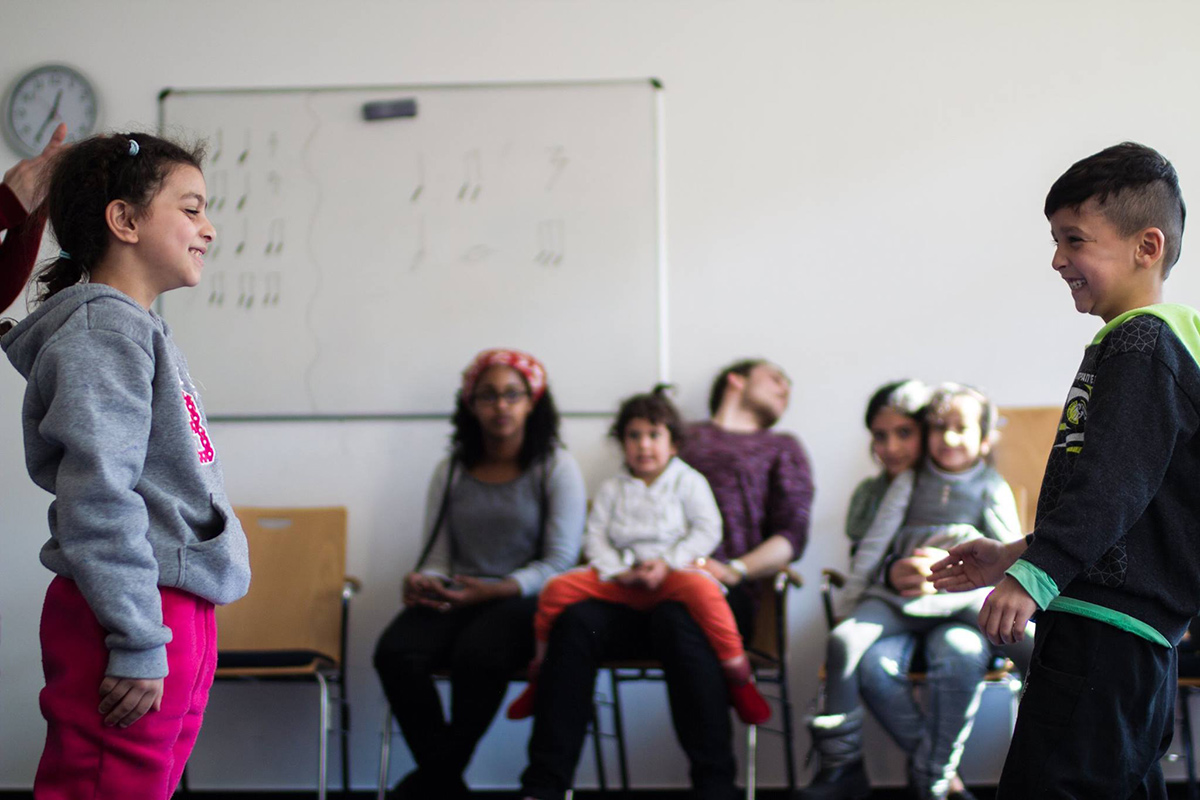 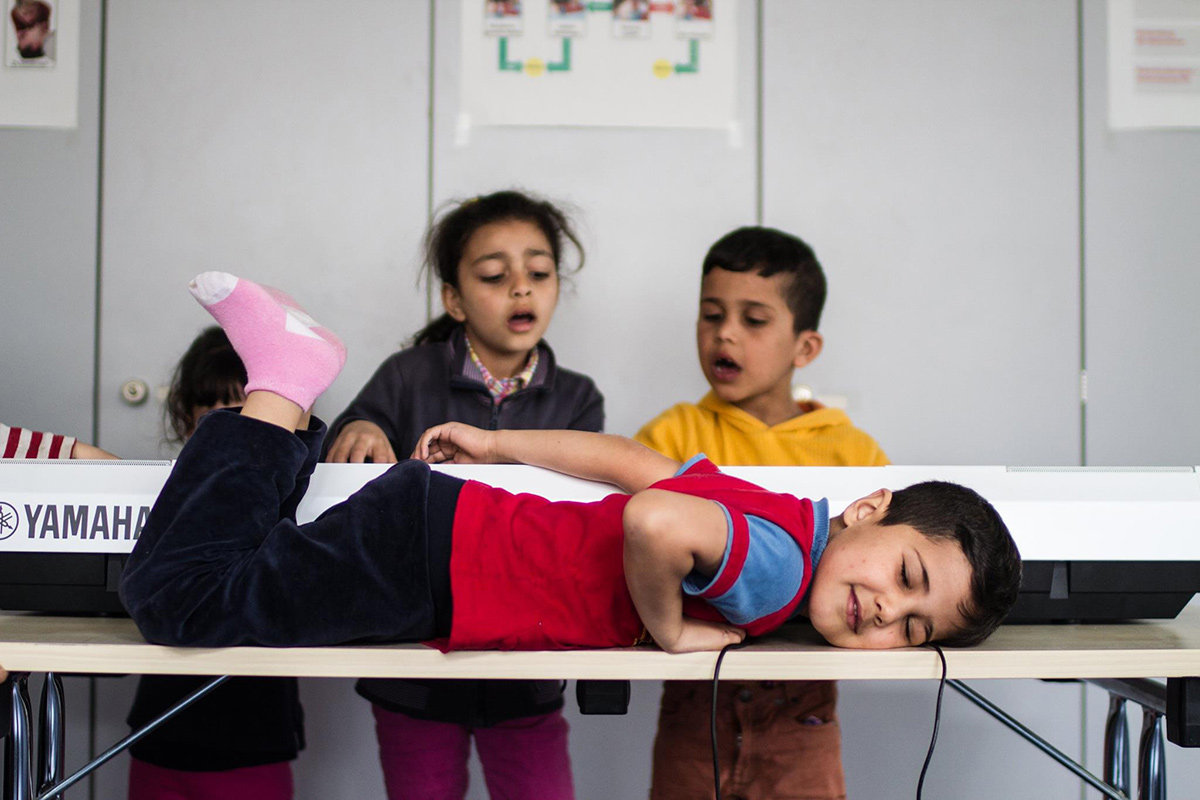 Younnis from Iraq finishes rehearsal with a nap.

What are some other everyday experiences we should know about?

There are 50 catering companies camp managers can choose from, and ours is a bad one. Everyone hates the food. It's the same spread every meal — bread rolls, cheese, meat, salad, and pasta. It's not high-quality and it tastes the same after a while. There are no refrigerators for fresh groceries, and families aren't going out to restaurants because they want to save money, so the only alternative is ramen noodles.

People are sick from the food all the time. I met an MMA fighter who couldn't train anymore because the food is so bad. Conveniently, our first-aid room is regularly understaffed because The Red Cross is just across the street, but doctors come into the camp after work hours. Every two weeks, a volunteer gets churches to donate public space so women of all cultures can cook and eat together. That should be happening every week, but it isn't because the camp is understaffed.

Where do you go to clear your headspace?

At the camp, I don't take anything to heart and focus on what's going on in the moment. At least I try. It's a confronting environment to walk into, but I have to put aside my concerns and interpretations and listen and improvise for the kids. When I am back at my apartment at The Academy, I listen to podcasts about US politics, in particular Anderson Cooper 360 Daily, because this election episode feels like the longest Harry Potter book ever. It can't possibly be real.

What are people saying about American politics at the camp?

The temperature toward the United States isn't necessarily positive. I've gotten questions like, “Is it true that the US has only taken under 3,000 refugees?” And there's anti-Drumpf sentiment across the board, from friends, refugees, and Germans. 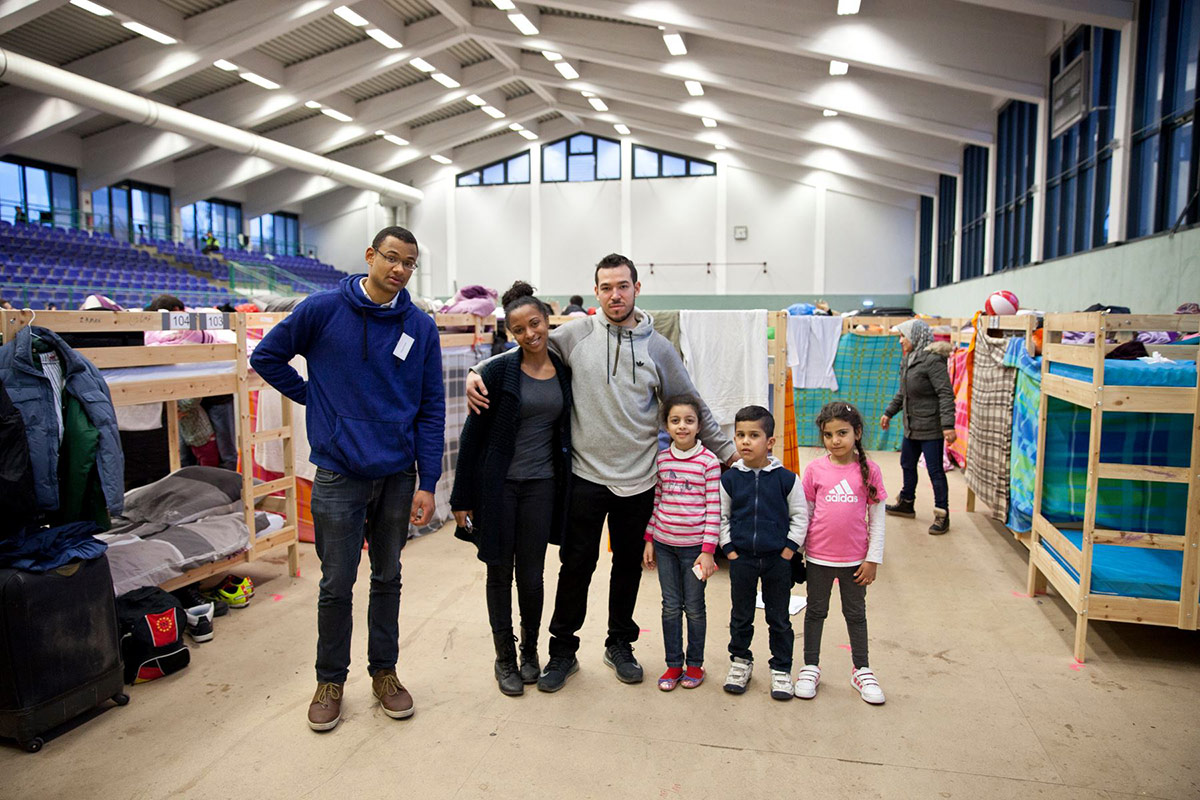 A family inside the refugee camp. 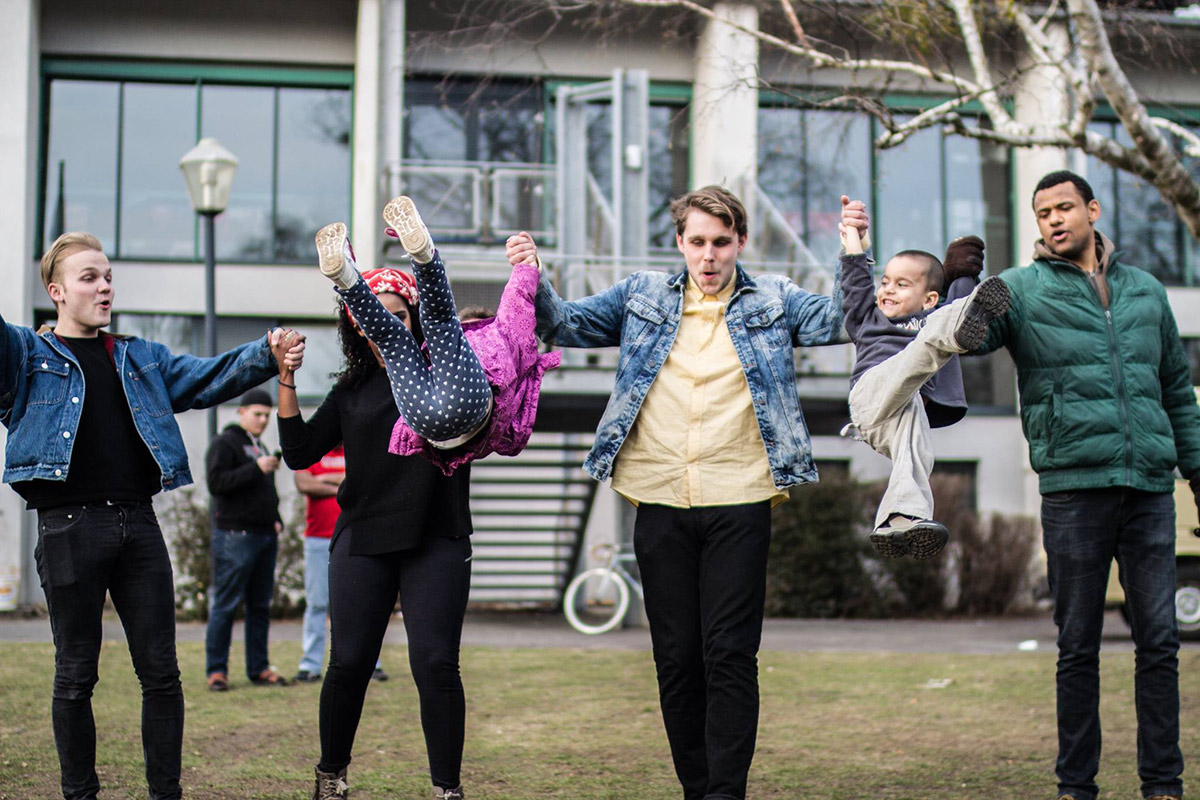 Volunteers and kids playing in front of the refugee camp.

How has The Hutto Project affected the refugee community?

I don't notice shifts in behavior with the kids because I'm with them all the time, but one of our team members recently returned after a week away and her jaw was on the floor — students were sitting, being quiet, not acting aggresively. There is one girl, a burn victim with missing fingers and a charred face, who would always hide under the piano or pretend to sleep when she was called on. Now she shows up consistently, does the mirror exercise, and plays scales on the piano. She makes me proud.

Kids are practicing their songs outside the classroom. I've had parents shake my hand and express gratitude. Though always accessible through smartphones, music is something many refugees have given up because it reminds them of home. Ask refugees what they're favorite music is, and many will stop dead in their tracks. For them, music is a door to their innermost dreams and feelings. For their kids, it's a privilege.

What will happen when the show (and the refugee crisis) is over?

If the kids want to continue learning music after our performance in downtown Berlin, I'd like to involve them more in the creative process and teach them how to use recording programs. We're also planning to turn our experiences into a documentary film. And depending on the success of our fundraising, the project can expand to include an adult choir.

The long-term goal is replicability and sustainability. We want to establish similar creative music programs in places where people need it, perhaps close to home, like the Mexican-American border or in communities around the United States. We would have teams set up choir programs and record and document them, which is important for fundraising and community backing. Involving locals is important in making the operation sustainable. What's difficult is finding people who respond to what these kids really need. And, of course, raising money.

DONATE TO THE HUTTO PROJECT

The show must go on! Click here to contribute.

In Tanzania, It's the Small Things That Count Most
Vodka for the People: The Booze that Makes Water Better
The 24 Best Volunteer Opportunities Around the World