Paris may be the most romantic city on Earth, but it also has a proud tradition of highbrow kink and naughty pursuits. (Anaïs Nin, here's looking at you, kid.) We sent our intrepid reporter to one of the city's best sex clubs — okay, someone took her there on a date — to see what happens behind the ropes at Les Chandelles, the high-class "club libertin" allegedly frequented by Dominique Strauss-Kahn, that notable French lothario.

PARIS – Most women I know won’t own up to having been there. But many of them have, of course. Most chic Parisiennes eventually land up there in an attempt to stave off inevitable deathly couple-sex doldrums. Versus an adulterous adventure, which is an absolutely acceptable, even encouraged, Frenchy sport for both goose and gander, a club échangiste is in theory, by comparison, shared titillation that lowers the risk of your husband falling in love with another woman.

The theory holds water, because love at first site is unlikely chez Les Chandelles. On the other hand, to call it a club échangiste, as it is popularly known (the toniest one of its kind), is a misnomer. A club libertin, as the club proclaims itself, is indeed the more accurate description. The establishment caters to essentially straight patrons performing traditional sex roles, with women's dress code requiring a skirt and heels.

An unmarked street entrance leads to a claustrophobic foyer. (This is a discreet version of the red velvet rope where your entry or not is decided upon via video camera.) Not a private club, Chandelles is open to the public, but many are turned away, even if respecting the dress code, as happens at other clubs like Le Baron. They want to keep it select.

At the coat check, you surrender your coat, purse, wallet, telephone. When the attendant clarified that phone confiscation guarded against photos, I had to stifle a laugh. Hadn't thought of that. Then, you give your first name. My companion shared his and deferred to me to share my own invented one. Whereupon the attendant admonishes that though he is very chilled out, his colleague would have thrown us out because prostitutes are not allowed. Merci, thought I. Apparently he judges my silk kimono and Sergio Rossi stilettos to be in exceptionally good taste.

Want more stories like this? Take a peek inside the London sex club where no men are allowed, find out what it's like at a Thai sex show, or sign up for our newsletter and get these stories in your inbox.

Heart beating, you proceed downstairs. The red-cushioned interior design aims for a tasteful, updated wink at boudoir. Kiddy candies and wonderfully ripe fruit are laid out on a table as you head to the bar. Entry fee depends on the evening and whether you dine or not and may include a rather expensive flute of champagne. We sucked ours down observing couples, some on the dance floor, while adjusting to the place and matter at hand. My date comments that it is a good DJ, reputed, as the food, to be above passably good. My reply was, Are you kidding?? Judging by the bar and sexy moves on the dance floor — though I suppose this depends on the evening — Chandelles could have been a traditional club for the over-40 crowd. 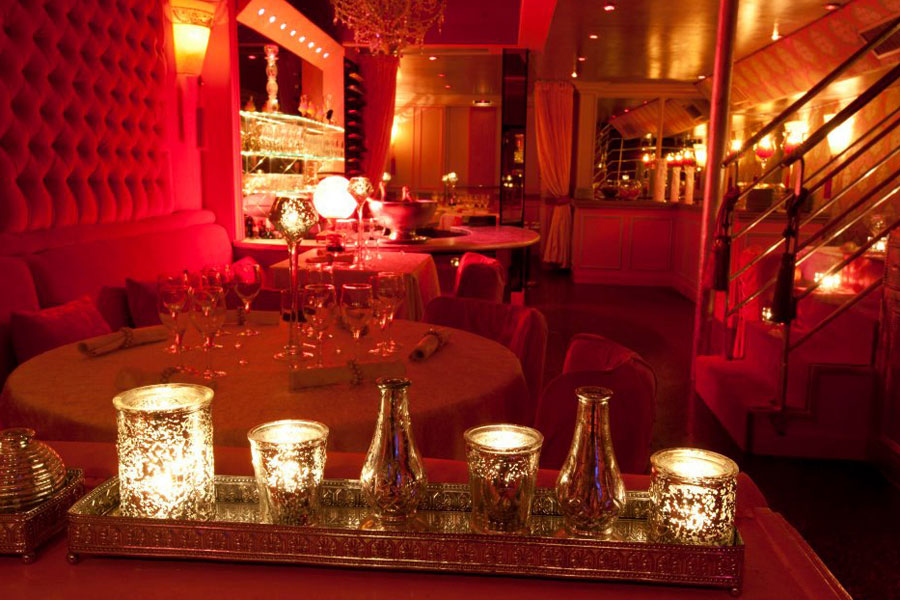 The married Italian seducing me is a habitué. After drowning a suitably pacifying amount of bubbles, he takes me on a tour. I have agreed to accompany him here because I am secretly, hopelessly, and pointlessly in love with him.

I am sure there were different dynamics in play and an invisible organization of preferences, but I wasn't close enough to understand. (And hilariously — or subsconsiously — I wasn't wearing my glasses.) It may be that different rooms had different sex trips, but without toys or talk, I can't really comment. Maybe I need to go back, in the name of Research.

It is cheesy, yes, but as with all things French, the clientele takes themselves seriously enough that if you are in the mood, you can suspend doubt and go with it. In my case, I needed to block out: fears of diseased filth on banquettes, lack of interest in balding executives, intuition that I was amongst professionals, and a violent reaction should another woman approach my beautiful man.

We arouse curiosity. We join the group, indulge, but keep to ourselves. It is a free space to do what you desire. You set your own limits or lift them unexpectedly, as some who have confided in me have chanced.

I don't think such a feel and dynamic could exist outside the French capital. Boudoir and physiognomic kitsch aside, the peculiar combination of somehow serious, well-heeled, unrestricted, intense sexuality reflects an old and specific cultural, economic, and aesthetic tradition which will appeal to free spirits, regardless of where your limits may lie at the moment.

I read a piece online delighting in the fact that residents of the 6th arrondissement protested against a McDonald's opening on their street, but made not a peep over the arrival of a sex club. Culture shock is harder to come by these days than it once was, and, sexuality being ubiquitously bland, a foray to this den of iniquity offers a delicious dépaysement.