Are you heading to Venice for the Biennale? So is everyone else. Which is why you'll want to know about these lesser-known spots around the lagoon.

VENICE – In the past three years, since returning to London from Los Angeles, I have been catching up with Europe's finest cities. One that I had somehow never visited was Venice. But once I finally made it on the overnight Thello train after attending Fashion Week in Paris, there was no going back.

I have since spent around six months in Venice, getting to know the city from every conceivable angle through my work as a reporter and through newfound friends.

I once stayed in a holiday camp on an abandoned stretch of beach at the top of the Lido, where you can get away from it all on a dreamy beachside location that feels miles away from the city, when I was reporting on the Venice Film Festival during a tourist-packed August.

I have slept at the largest private palazzo on the Grand Canal, now Aman Venice Hotel, and met Count and Countess Gigi and Bianca Arrivabene, the owners of the palazzo who live upstairs.

I have visited both the Art and Architecture Biennales and marveled at sci-fi style Chinese art shown inside old churches, and dined with the architects who traveled from far and wide at Harry's Bar.

I have left the glamour behind and taken a small boat to visit friends of friends who live on a tiny private Venetian island, one so small I didn't ever catch its name. The family often spends the summer there in a wooden hut, Robinson Crusoe-style.

And I have, of course, been to a Carnival Ball, winding through the canals with a boatman who insisted on kissing me en route.

But outside of these archetypical Venetian experiences, I have seen things that many visitors don't get to see. And I know that not everyone can visit some of the most splendid private homes in the city as I have, but anyone can wander around islands like Murano and Giudecca later in the evening to experience them like the locals do, without hordes of day-tripping tourists. 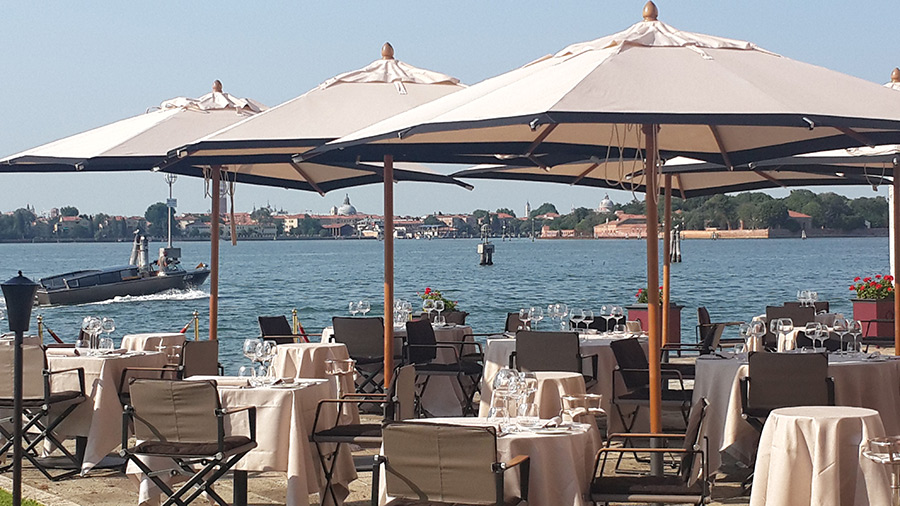 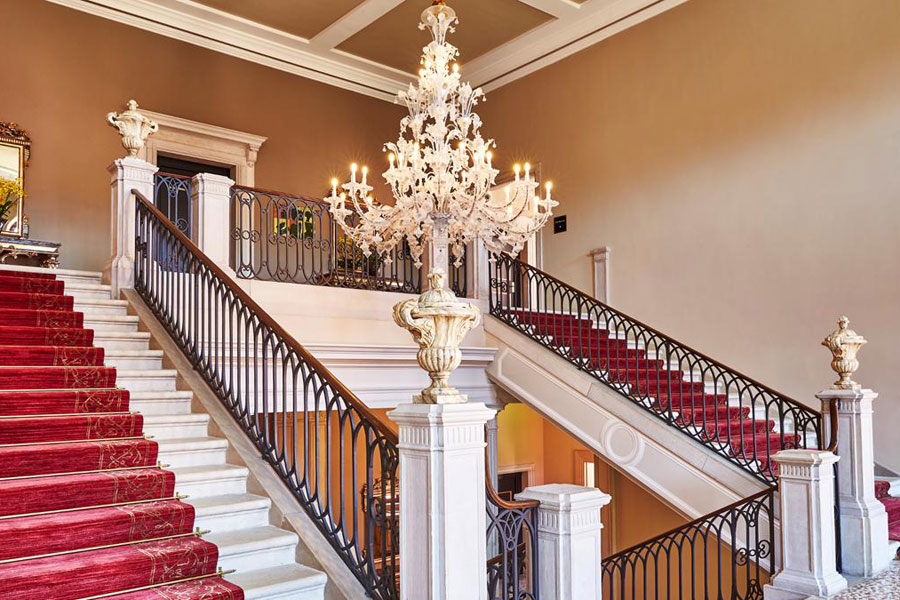 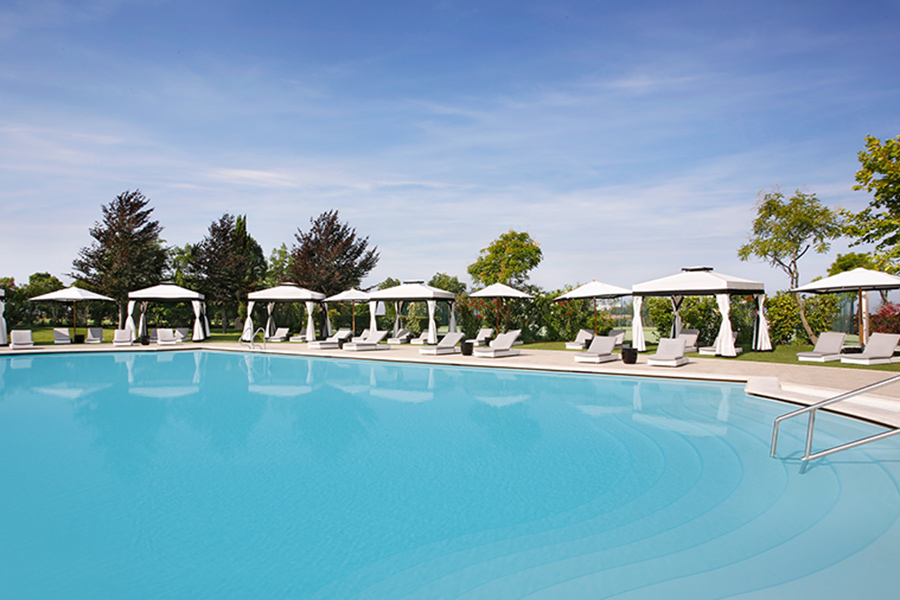 The pool on the lagoon. 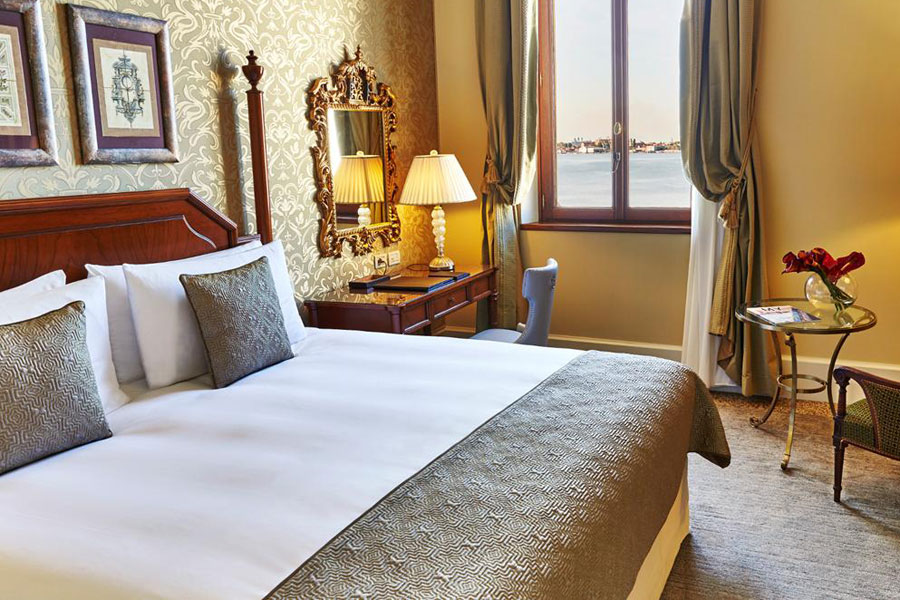 In my many visits, I have stayed in city housing for the poor and slept inside a converted Murano glass factory, but last summer I had a grander experience — a few relaxing nights at the wonderfully restored San Clemente Palace Kempinski, located on the private island San Clemente, a ten-minute boat ride from San Marco. The building once served as a deluxe lunatic asylum, and I felt like I had escaped to a haunted house, exploring the vast corridors with friends late one night. Mussolini apparently sent his first wife here, and my friend insisted he could feel her spirit.

While at the San Clemente, I dined with and got to know the current manager, Benjamin, who could talk of nothing but holding meetings with his pet rabbit and sleeping in the so-called Corridor of Death with other staff members in a side building where, one presumes, those who had been sent to the lunatic asylum stayed when they were on their way out.

Real and imagined phantoms notwithstanding, the Kempinski San Clemente remains a wonderful escape from the mainland, with its pool, unusual design (including hospital-style wide corridors), and beautiful views at dinner. The hotel offers an unusual slice of Venetian history, and anyone with a room or dining reservation can take the boat from San Marco to visit.

More recently, I had tea at the home of Lady Frances Clarke, an institution in Venice for her work as a founder of Venice in Peril, a wonderful organization working to preserve the city from sinking. She told me about their biggest project to date, to save the Armstrong Mitchell hydraulic crane in an historic dockyard.

With the Venice in Peril map as my guide, I took off by foot to see many of the other wonderful sites they have helped restore over the past fifty years, including parts of the legendary Fenice Opera House. I trekked up to see the organization's first restoration, Madonna dell Orto church, the subject of a recent Venice in Peril book. 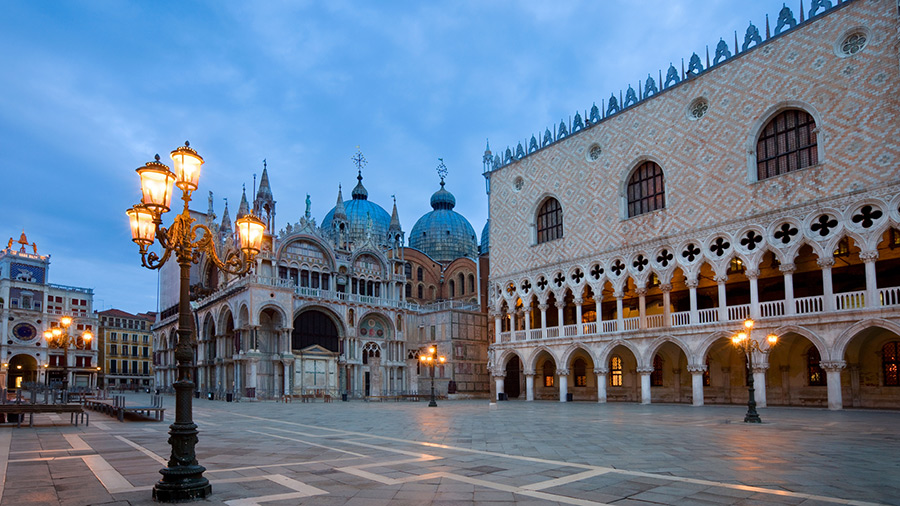 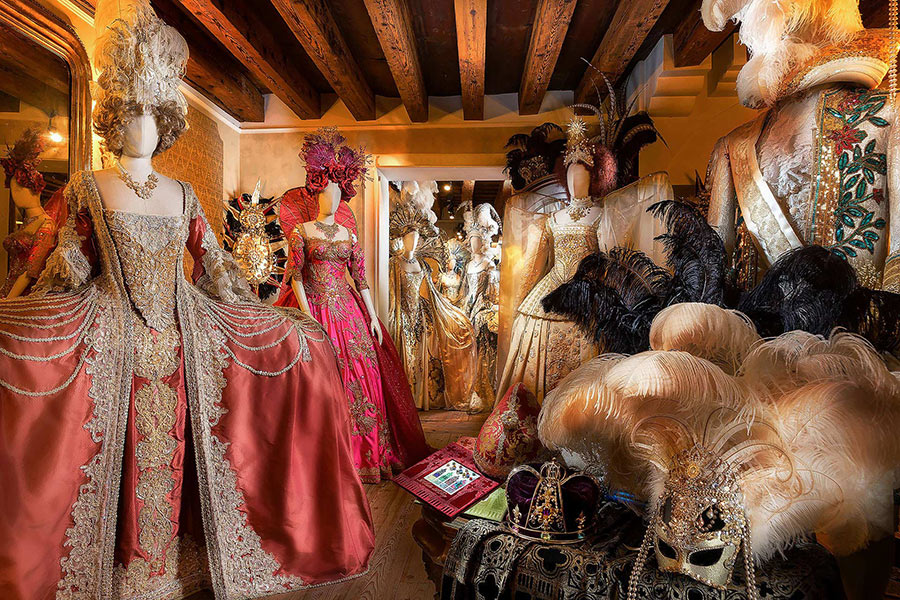 Carnivale finery for the taking. Photo courtesy of Antonia Sautter.

As I write about different subjects, I have also gotten to know the city's architects, opera directors, fashion designers, and visited the incredible places that they work, like the converted church and convent used by interior designer Umberto Branchini and his team. Have a look inside for serious (if unattainable for unable to move into an old church) design inspiration.

Speaking of convents, I once took a tour with the costume historian Isabella Campagnol to visit the locations that feature in her fascinating book Forbidden Fashions: Invisible Luxuries in Early Venetian Convents, which documents the little-known fact that many of the Venetian nuns from yesteryear were often stylish aristocrats sent to convents to save the family money. Once inside, they continued to dress in high style. The book details many of the convents where the action takes place, like the San Zaccaria convent in San Marco, which is now a police station.

I have yet to explore the places that Campagnol has included in her follow-up book, My Pretty Venice, A Girl's Guide to True Venice, an insider's guide to femme-centric destinations in the city and the women who have made Venice what it is today.

Next time I'm in town, I'll visit the new sundial created by Britain's leading sundial maker, Joanna Migdal, which was commissioned and installed this April at the Peggy Guggenheim Collection, a museum best visited at off hours or by private tour if you can beg for one. 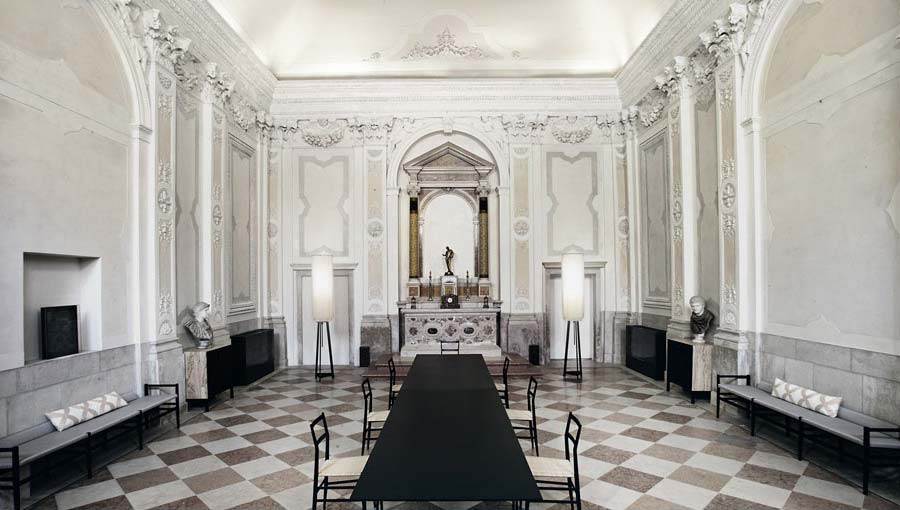 If only every office looked like this one. Photo courtesy of Umberto Branchini Studio. 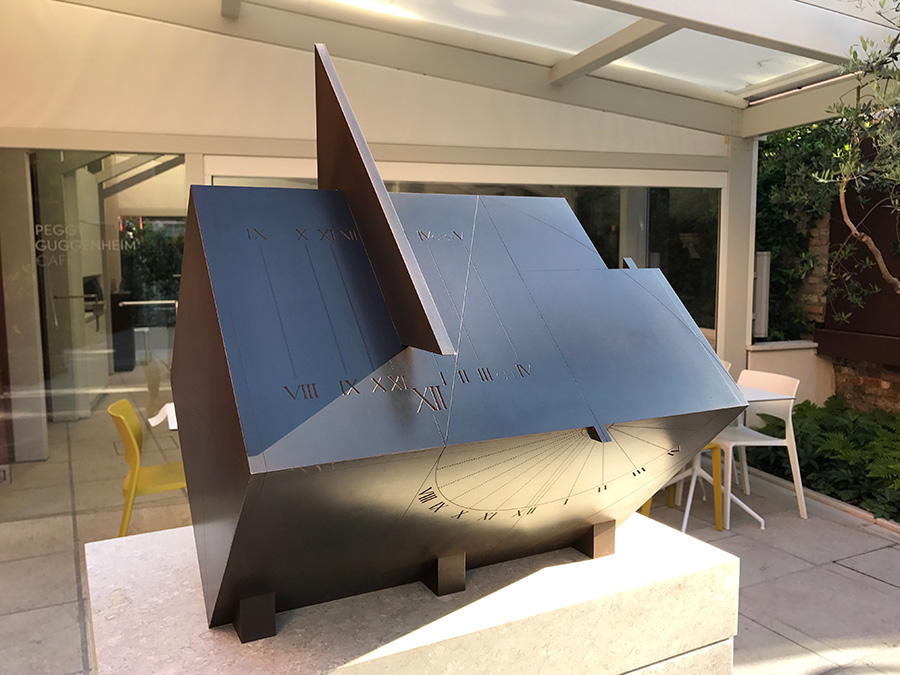 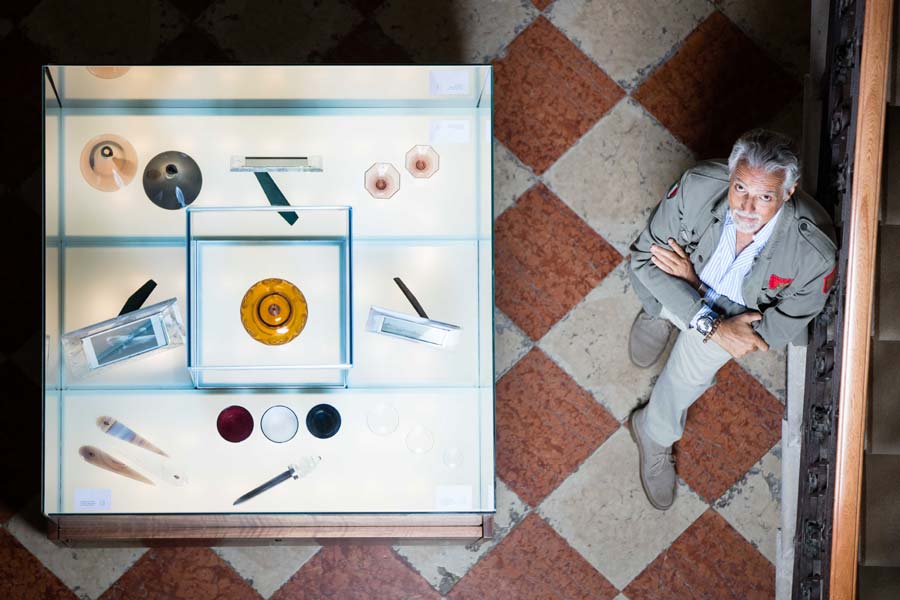 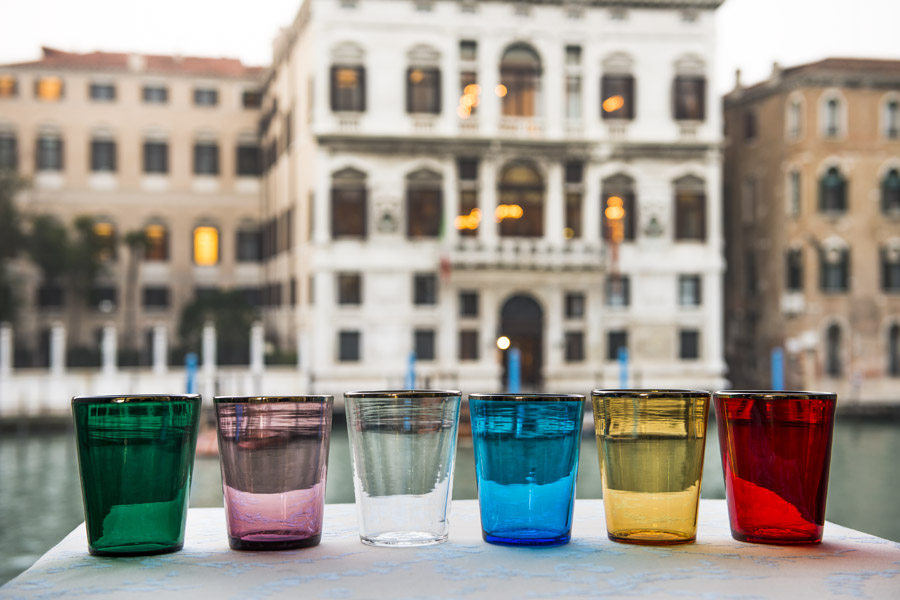 The Vaso collection by Count Gilberto. Photo by Massimo Sestini. 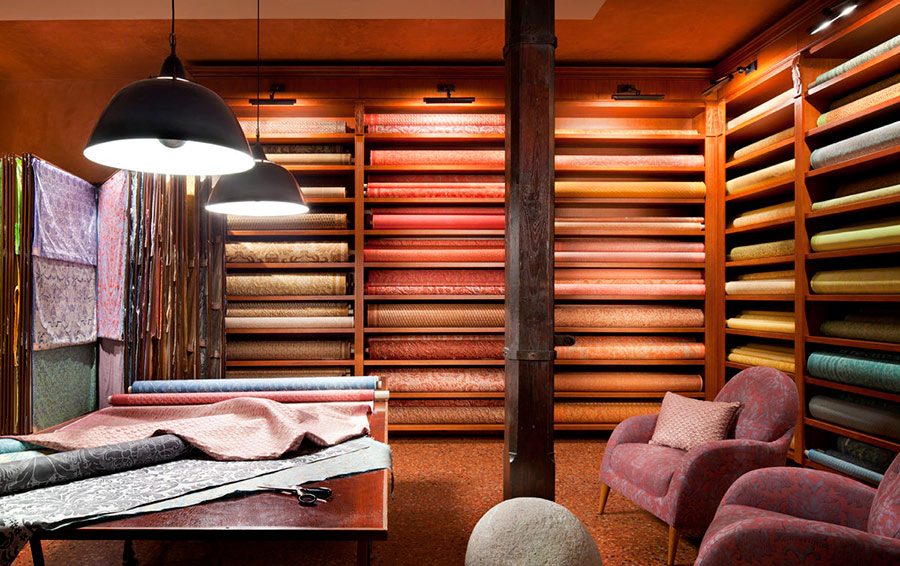 Visit the showrooms at the top-secret Fortuny textile workshop on Giudecca and its beautifully restored gardens.

Enjoy a Bellini, a wander through the peaceful garden, or a spa treatment at the Belmond Hotel Cipriani on Giudecca.

The Berengo gallery on Murano offers an artsy take on the glass-blowing tradition.

The atelier of Antonia Sautter is the place to buy your Venetian carnival costume.

Venice Prestige is my go-to when I want to stay in a private apartment and feel like a Venetian.

After seeing the restored reliquary by jeweler Roberto Coin at Basilica Saint Marco, you can visit his shop among the many jewelers lining Piazza San Marco.