The Hoxton is a hipster-chic and quixotic hotel for day-users, businesspeople, and tourists alike in the heart of Holborn, London.

Japan has short-use "love hotels" and now an increasing number of cities in Europe and the United States are offering hotel rooms to use during the day, for both work and pleasure.

Innovative travel company Dayuse Hotels is at the forefront of this trend. Specializing in providing rooms in conveniently located hotels with top facilities, they have now expanded into London at The Hoxton in Holborn, one of the city's hippest new hotels and one of the first to offer day rates.

I checked in from 10 a.m.–4 p.m. to see what they have to offer guests requesting a room for daytime hours. I spent some time in the lobby, then ventured upstairs for an afternoon whose details will remain unwritten.

Situated a stone's throw from the West End Theatre District and Covent Garden (and close enough to Oxford Street), Hoxton is a hotel that doubles as a bustling meet/work space popular with young entrepreneurs and men in suits. The glass-fronted lobby reveals tables and sofas filled with those chatting up meetings and tapping away on laptops. The more leisurely paced brunch at earthy wooden tables and drink at the designer bar in the lobby. 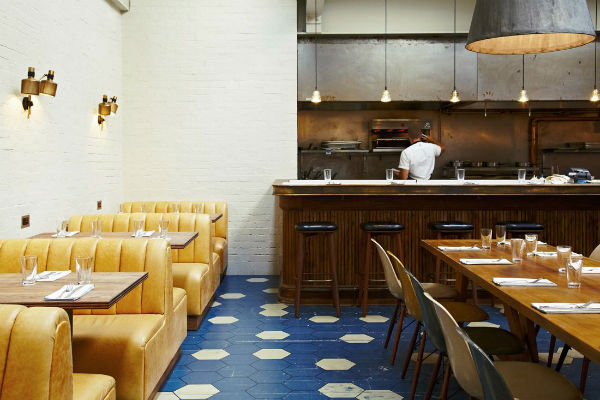 Comfy booths and a Brooklyn aesthetic at Hubbard & Bell inside The Hoxton.

The Hoxton has everything a girl could need from a hotel: a really helpful check-in desk, a nail parlor, a coffee shop called Holborn Grind, a Chicken Shop restaurant in the basement, and a Brooklyn-style grill called Hubbard & Bell. 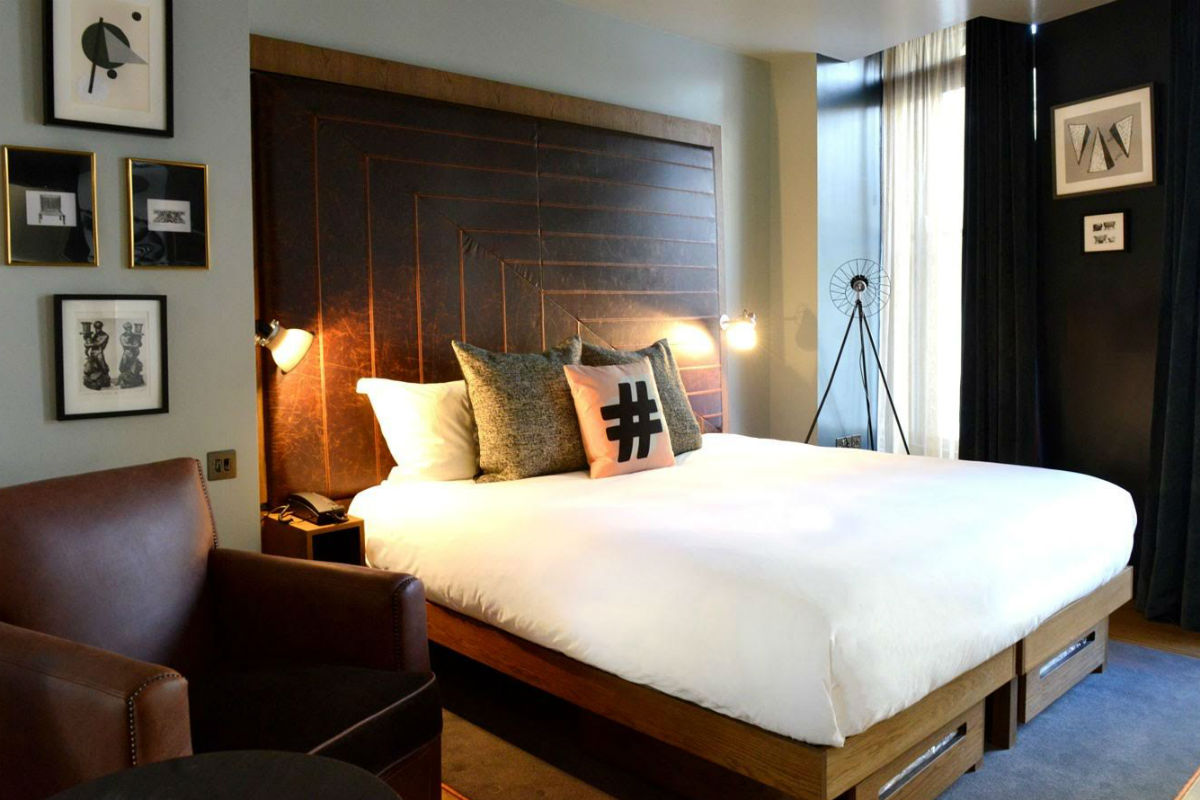 A guest room at The Hoxton Holborn.

The hotel has 174 rooms in all shapes and sizes. The lobby has a Scandinavian design sensibility, hot on wood of all kinds and very minimalist. It's rich yet understated. There are four room categories: Shoebox, Snug, Cosy, and Roomy. The rooms are all different but include free WiFi, an hour of phone calls, tea and coffee, water, and a breakfast bag drop.

My room was a compact, womblike, and luxurious space decorated with retro items like an old radio, lamps, and a small fold-out table where I made tea with the smart set provided. It was an excellent spot for a seductive afternoon liaison. A plush bed dominated the space — a large circular mirror covered one wall, an armchair occupied a corner. This is a space designed for spending time in bed. (Ahem. You can fill in the blanks, day use friends.) The bathroom was equally designer, an immaculate and lovely compact space with a glass shower and white wall tiles. The corridors leading to the rooms are sleek and dark, with room numbers next to the floor mats — an extra designer twist.

Those having meetings in the city who want a private space to meet. Lovers. Visitors wanting to stay somewhere with an especially lively and hip vibe.

Holborn is in a bustling location at the intersection of offices, the theater district, and shopping galore on Oxford Street. During Fashion Week, the area is filled with the fashion flock heading to nearby venues. This is an urban hotel on a busy street that feels as mad and anonymous as London gets.

What To Do Nearby

For shopping, stroll Oxford Street for mega stores like Selfridges, and roam side streets like New Bond Street and Brook Street for posh shops and galleries like the new Issey Miyake boutique and Halcyon Gallery. The British Museum is a stone's throw away; one could spend days here exploring looted antiquities from the Empire. Opposite the museum's main entrance on Coptic Street is one of the most beautifully designed Pizza Express branches which is a buzzing spot for lunch. (Yes, really, Pizza Express.) Other nearby art options: Somerset House for exhibitions, cool coffee shops, and light dining options; and the Fashion and Textile Museum nearby in Bermondsey, a newly renovated neighborhood of warehouses gone designer. Good dining options near the hotel include Balthazar, The Delauney, and Opera Tavern in Covent Garden. Or head for cocktails at Lobby Bar in One Aldwych Hotel to catch London's after work vibe.

There are tons of theaters nearby, so look for half price tickets.

Book a Dayuse room from £99 between 10 a.m. and 4 p.m. Of course, the Hoxton is first and foremost a regular hotel, so if you like your room, rates start at £179. Click here for reservations.