As someone who works in travel, it's safe to say that I thought as much about where to honeymoon as I did about where to get married. For months I — I mean, we — put off making a decision, while I pondered and polled the most well-traveled people I know. I asked everyone: the publisher of Travel + Leisure (answer: Bali), the president of Relais & Chateaux (answer: Argentinian road trip), fellow travel writers, PR folks. On top of the normal constraints of planning a honeymoon (a place that's relaxing but interesting, new to both people, romantic but not cheesy, plush but not wallet-decimating) I felt additional pressure to come up with something original.

THE TROUBLE WITH OTHER PLACES

Given my stubborn obsession with originality, not to mention hours of intelligence gathering, I'm tickled by where we ended up: Hawaii. The most classic honeymoon destination of them all.

Ironically, my now-husband had suggested Hawaii right out of the gate. Being from the East Coast, he had never been and, given that we were getting married outside Seattle, the proximity made sense. Also, it's a dreamy, beautiful, exotic but easy place. I summarily dismissed this sound logic. Having grown up in Seattle, I had been a few times and, c'mon, we could do better. So he patiently retreated, while I charted the best flight routes to various Thai islands; pondered a road trip that took in Austria, Slovenia, Montenegro and various northern Italian lake towns; and consulted almanacs and trusted sources to determine if the weather would really be okay in Trancoso, Brazil, come July.

Summer — especially late July and August, when many Americans marry — is not a great time to honeymoon. Europe is too crowded and expensive. It's winter in ideal destinations like Argentina, South Africa, and Australia. Too hot and sticky in Central America and, for that matter, much of Asia. I envied September couples. But I didn't want to put the honeymoon off — that seemed to defeat the purpose.

HAWAII IT IS THEN

As decision-time drew closer, the cost of plane tickets and the flight time to Hawaii was literally a third of the other destinations we were considering. I was neck-deep in planning a wedding from across the country. And just like that, the most prevailing piece of honeymoon advice — keep it simple — prevailed. As soon as we had settled on Hawaii, I felt hugely relieved. No 23 hours in an airplane. No shots. No getting sick from the food. No language barriers. No visas. No elaborate itinerary-creating. In fact, beyond booking hotels, we could plan everything after arriving.

But which island to visit? It was always between Kauai and the Big Island. The Big Island (also called Hawaii) won out because it was the one I had never visited, it seemed the least obvious choice of the main four islands, and it offered so many diversions for a long trip (11 days in our case). Many people advised combining both islands, and that's certainly doable, but as long as we were going the easy route, I wanted easy all the way. Besides, it's Hawaii, we'll be back.

I had originally shied away from Hawaii because I wasn't thrilled by the hotel prospects. Generally speaking, the choices are limited to big resorts (some very fancy, some very cheesy), little B&Bs, and condo and house rentals. What Hawaii lacks are small, unique, reasonably priced boutique hotels. As I tried to dig up hidden gems that didn't exist, a travel writer friend who had grown up on the Big Island offered wisdom: "Give in. Stay at the big resorts. It's your honeymoon. Just be those people." She wasn't the first with this advice. And so we did, but because we both like hotel hopping, we decided to move around and stay at the Mauna Lani, The Fairmont Orchid, and the Four Seasons Hualalai. 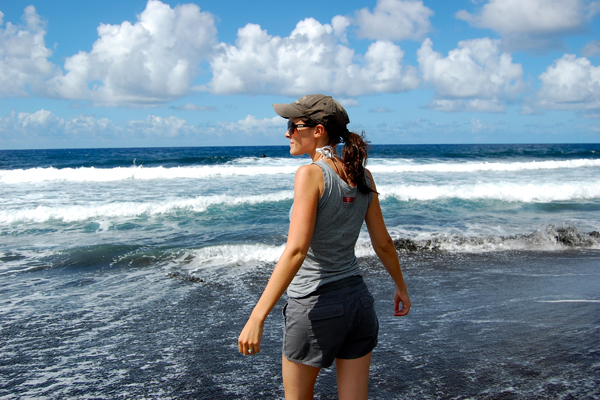 THE TWO HAWAIIS: KONA AND HILO

Upon arriving, I quickly realized the drawback to the above plan and we wound up slightly changing our approach. The first descriptor one usually hears about the Big Island is "big." Roughly the size of Connecticut and double the square milage of all the other islands put together, the Big Island lives up to its name, and many of its prime attractions are spread out. The island is roughly divided into two sides. The Kona side is dry, hot, and home to the best beaches and resorts. The Hilo side is wet, green, less touristy, and home to many small B&Bs. The drive between the two takes several hours. So if you want to explore Hilo's blockbuster attractions (Akaka Falls, Volcanos National Park, the Hawaii Tropical Botanical Garden), you should stay on that side for a few days. Otherwise you're looking at six hours of driving round-trip from your Kona-side resort to visit the famed Volcanos Park. So we skimmed several nights off the Fairmont and redistributed them to the great Ala Kai Bed & Breakfast near Puna on the Hilo side.

This was a good choice. The two sides of the island are vastly different and both are worth seeing. Hilo is more beautiful, with lush gulches and valleys straight out of Fern Gully. It's quieter, gray, and feels more authentically Hawaiian. Kona, by contrast, is hot and flat, with miles of a lunar-like black lava landscape that reminded me of Iceland. But the beaches are divine. To put it in perspective: On average, the Kona side receives six inches of rain a year; the Hilo side averages 160 (quadruple the annual rainfall of Seattle). While on the subject of climate facts, this is one you'll repeat: Of the world's thirteen microclimates, the Big Island possess eleven. It's hard to realize what this means until you're there, driving from arid desert to rolling plains to misty hills to freezing mountaintops to tropical valleys. The astounding variety is the island's biggest selling point. Those looking for serious adventure — day-long treks, white-knuckle drives, big surf, and great diving — will find it here alongside the famed beaches.

THE DISTANCES AND THE DRIVING

The most prominent downside of the island? Driving. In eleven days, we put 796 miles on our Jeep — and that's including five days when we hardly left the hotel. Rental rates weren't cheap either: Our Jeep with GPS and 4WD and the bare minimum insurance ran about $140/day. Gas is pricey, too, averaging well above $4 per gallon during our visit. The highways are all two-lane, so it can be slow-going (if scenic). Roads have improved over the past decade and are more efficient and safe. One of the unexpected upsides of the Big Island was the food. The Hawaii Regional Cuisine movement, which promotes island locavorism, has helped improve the food scene tremendously. The commitment to quality local ingredients springs up everywhere, from roadside smoothie stands to the Four Seasons, which claims to source 80 percent of its food from the island.

For the lowdown on one of the most impressive hotel amenities ever, the best place for poke, a picnic at 13,796 feet, and where to get your lomi-lomi on, check out Hawaii: Big Island Essentials.