Traveling often makes us feel like we're on top of the world. That's why we love it. When Fathom intern Alison Weissbrot traveled to Peru, she was literally standing on top of the world — no hyperbole or metaphor involved. It was quite the great adventure.

MACHU PICCHU, Peru – Machu Picchu is incomplete without the looming green mountain that stands behind the ruins. The infamous peak, called Huayna Picchu, juts through the misty clouds that cling to it, completing the atmosphere of a mystical jungle. It's a massive, reverent figure, standing like a king in a sea of green giants. As I stand looking at it in person, I think it is the most incredible thing I've ever seen. Then my tour guide tells me that we were going to climb it, and it becomes the scariest.

I knew nothing about this mountain peak beyond what I'd seen in photos. In real life, it looked like an insane climb. But scaling Huayna Picchu is a rite of passage for visitors to the ancient site — assuming they haven't been wiped out from the four-day hike along the Inca Trail.

What appears from afar to be a 90-degree plunge is really a steep but manageable rocky stairway that crisscrosses the face of the mountain. The hike is limited to two sessions per day, at 8 a.m. and 10 a.m., and climbers need to sign up in advance. I'm with my family on the early hike. My older brother and I are game for anything. Mom is skeptical, but ready for the challenge. Dad, a kid at heart, is sore from a few days of hiking, but refuses to be left behind. 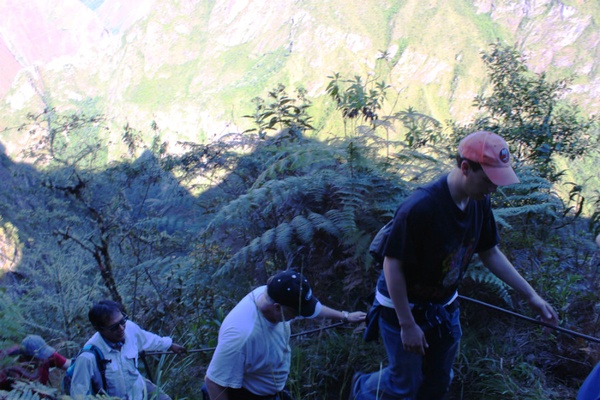 A long way up.

This is not a hike for the faint of heart. It's a vigorous challenge, requiring frequent water breaks between switchbacks on the stairs. I wear walking shoes and carry a bottle of water and sugary treats to keep my energy up. (Starburst is our candy of choice.) The hike is mostly shady and is intentionally scheduled early in the day. The sun is strong at the high Andean altitudes, and sunscreen is a must.

Huayna Picchu was once a community with Incan temple ruins and farming terraces of its own, separate from Machu Picchu. I asked my tour guide José how and why the Incas could possibly climb this ridiculous cliff. His response: "They chewed the coca leaves." (As in coca, any of the four plants in the family Erythroxylaceae, native to South America. Known throughout the world for its psychoactive alkaloid, cocaine.)

The most spectacular part of the hike is watching the expansive, majestic ruins of the small town of Machu Picchu turn into a tiny spec on the mountain crest below. We climb higher and higher, ascending to a peak of otherworldly proportions. Making the pilgrimage alongside us were Americans, Australians, Europeans, South Americans, Asians — an entire world brought together by the magnetic mystery of this supernatural place, all climbing for the same purpose, to the same end. 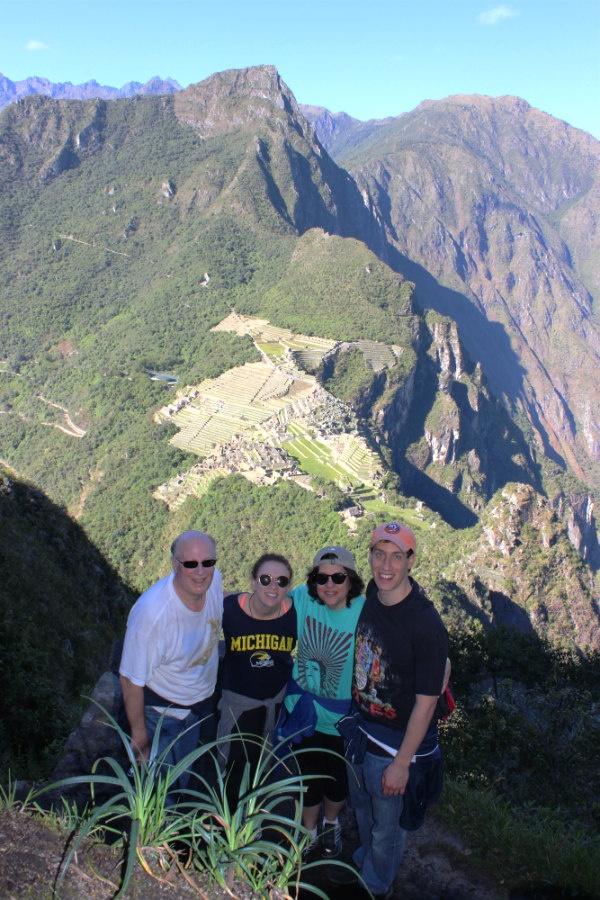 See that tiny spec behind us? Yeah, that's Machu Picchu.

There's nothing quite like standing before the ruins of Machu Picchu — until you stand 8,924 feet above them. The top of Huayna Picchu is a jagged mess of uneven boulders, with no flat ground whatsoever. Brave tourists climb and hop across the boulders like monkeys, taking photos and gazing out onto the Andes, filled with an emotion I can only imagine is similar to what it feels like to conquer the world. More fearful ones carefully edge their way across on their bottoms, cautiously peering over the boulders and warming up to the tiny dot of ruins below. Those who are exhausted from the climb (i.e., my father, who is always insisting on keeping up) catch their breath in the most serene of settings. Huayna Picchu ignites the adventurer in everyone.

There is an air of power, respect, and mystery about this place. A feeling of community among strangers who embark on the experience together. We feel the need to linger, to sit on a rock and marvel — at the ruins below, at the mountains beyond, and at the fact that we have somehow managed to find ourselves up there, experiencing this unparalleled moment.

Then comes the task of getting back down the mountain, which at some points involves doing the crab walk on our butts. But I am undaunted. I was anxious before the climb up, but, inspired by the magic of the mountain, fearless on the way down. 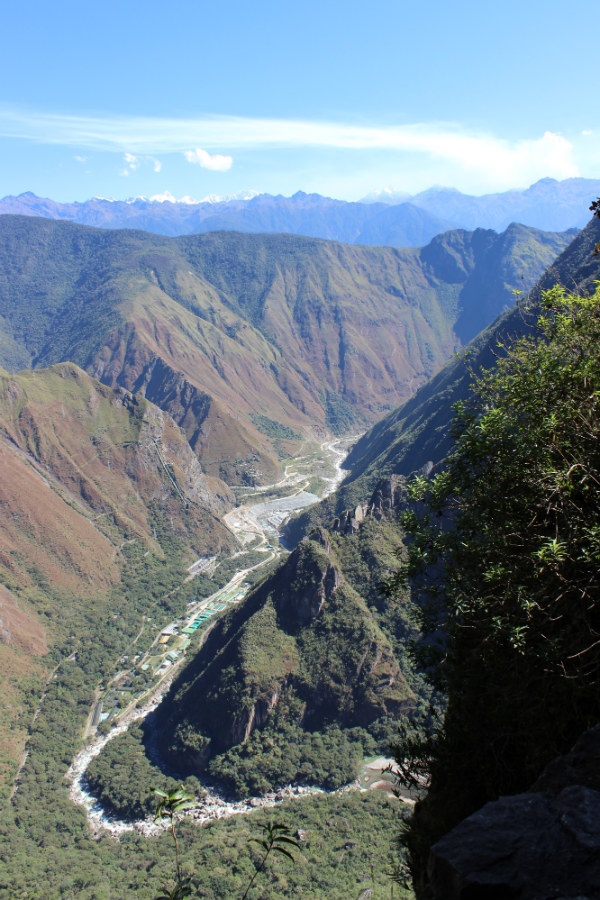 This is what the world looks like when you're standing on top of Huayna Picchu.

I climb on every rock, gazing over every edge, making detours from the path to explore each terrace as far as I can go. There's no adrenaline rush quite like the one you get from literally standing on top of the world. I am quite the adventurer now.

Halfway down the mountain, I am stopped by the words of a Peruvian guide resting on a rock on his way up.

Honestly, it couldn't be cheesier. But there is something about this place, the wonder of the hike, the feeling of calm that I take back down with me, that makes the words stick. Maybe it's the adrenaline coursing through my veins. Maybe it's the excitement of finally being in one of the top places on my travel bucket list. It's all this and more.

I climbed Huayna Picchu. I know how it feels to be on top of the world. 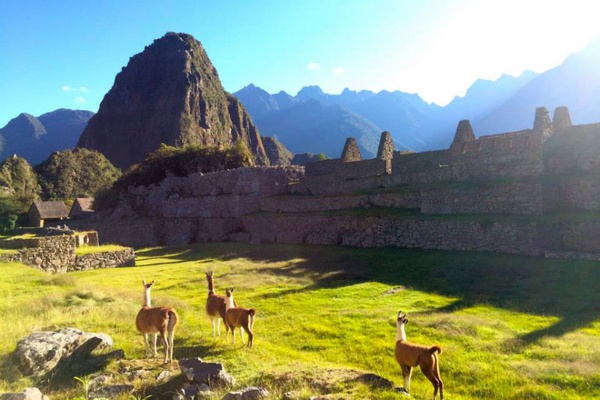 By Train: Catch a PeruRail train from Cusco to the tiny backpacker town of Ollantaytambo, which has a few famous Incan ruins of its own. The gorgeous scenery will keep you entertained for the hour and a half journey as you weave through the twists and turns of the lush Sacred Valley. If that's not enough to catch your attention, the hosts serve snacks and dress up in traditional costumes to put on a show in the aisle. And yes, it's interactive. My mom was thoroughly embarrassed to be pulled up to dance with one of the performers, much to my brother's delight.

The pricier option is the Hiram Bingham Train, named for the infamous Yale professor who discovered (or exploited, depending who you ask) Machu Picchu in 1911. The 1920s-style Pullman carriages will have you eating gourmet off crystal cutlery.

Make your home base in Aguas Calientes, a small town that doesn't serve as much more than an overnight stop for the Machu Picchu pilgrimage. You'll really feel like you're in the heart of the jungle now. Misty clouds cling to the mossy green mountaintops that surround the hilltop town. Check out the natural hot springs that run through the town or haggle for items at the many markets and souvenir shops. 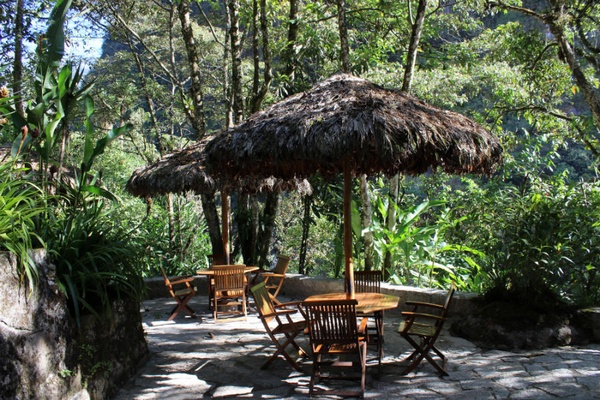 Jungle vibes at the Inkaterra Hotel.

Aguas Calientes has no shortage of hotels and hostels, but if I have one piece of advice for you, it's to spend the night at the spectacular Inkaterra. The jungle-inspired hotel sprawls out across the side of a mountain and stone pathways shaded by tropical foliage lead to the rooms and villas. The hotel even has its own nature preserve. Adjust to the altitude with an afternoon cup of coca tea, served poolside and an early dinner at the hotel restaurant. Machu Picchu beckons at the break of dawn.

Machu Picchu is one of the most popular tourist destinations in the entire world. The Peruvian government has placed restrictions on how many people can actually visit the ruins every day to prevent overcrowding. The easiest way to ensure you make it up is to book with a tour company months in advance. They can make all of the necessary travel arrangements early so that you are guaranteed a spot on the bus that takes you up the mountain from Aguas Calientes. 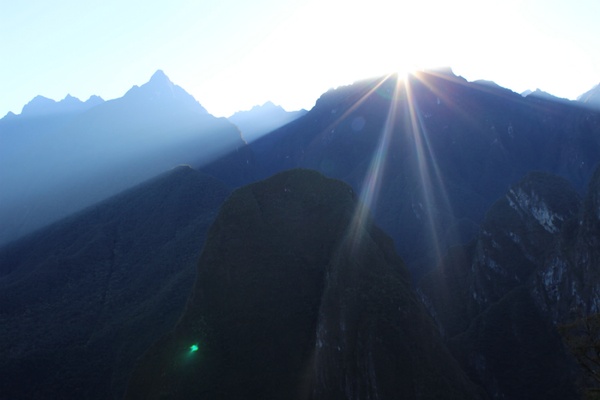 The sunrise on Machu Picchu. Worth the early wake-up call.

Be prepared for a long day with an early start — we were up and eating breakfast before 5 a.m., and were in the ruins by 7 a.m. You'll need your passport to enter the through the gates of the park. Machu Picchu is a large area with lots of ruins to climb and explore (and lots of resident llamas to play with!) so don't rush your time there. Who knows if you'll ever be back?

There's a small cafe outside the ruins where you can grab a sandwich and a soda, but most people bring lunch up to the site or arranged to have it delivered. You can check with the concierge at your hotel or your tour provider to see if they offer a box lunch service.

Huayna Picchu isn't part of the Machu Picchu deal. You need to make separate arrangements to climb the moutain. The tour company you book with can guarantee your spot either on the 8 a.m. or 10 a.m. hike. Again, this is another thing to book early, because only so many people are allowed on each hike.

A Family Road Trip Through the Andes
Hotels We Love: Rio Sagrado in the Sacred Valley
Peru's Best Tourist Spot on Lake Titicaca