Most people do not like to see words like "hurricane" or "tsunami" peppered in with their travel itineraries. But chasing the storm — planning a trip to a location that has recently experienced a natural disaster — can save you money and help revive a local economy. Here's how to do it.

My husband and I have become experts in taking five-star vacations at two-star prices. The only caveat is that to get these tremendous deals we have to chase the storm.

We've been on this quest since we first met in San Francisco after the 1989 Loma Prieta earthquake. We vacationed in the Caribbean in 1998, post-hurricane George. We traveled to France after the 2003 European heat wave. We ventured to Bali after the 2004 tsunami. We're back from Thailand, which has been hit by the worst floods in 50 years.

You might be squirming in your pants as you read this. It sounds callous, even a bit twisted, to take a vacation in an area suffering from the effects of an earthquake, volcanic eruption, or flood. But allow me to make two points.

First, in many of these disaster zones, the damage is confined to a small area. For example, although the press reported Bangkok to be under water, we arrived to find a city that was dry.

Second, for countries that rely on tourism, a natural disaster can plunge an economy into a free fall that takes years to reverse. Whenever we show up, the locals are very happy to have us. Our tour guide, Nina, from B.E. Tours in Bangkok, told us that we were her first clients in three weeks after the storm. "People read the international news and think, 'Oh, Bangkok is flooded. I can't go there.' The truth is, most of the city never even saw water. We need more tourists to come. We need the business."

Don't get me wrong. I'm not advising that you fly into the eye of a storm for the sake of saving a few bucks on your next weekend getaway. But if you are willing to do your homework and take the necessary precautions — including heeding State Department travel advisories and buying travel insurance — you can get pretty incredible deals and do your part in helping the locals get back on their feet.

Be smart and get out of the way. Don't go running to a place like NOLA post-Katrina or Haiti post-quake when conditions are uninhabitable and dangerous for locals and provisions need to go directly to the community. Read the news, check State Department advisories, and browse through online travel forums (Fodor's and Tripadvisor.com post daily updates from people in affected areas) to make an educated decision about how bad things really are on the ground.

But also be wary of media hype. It takes a lot to sell a story, and mainstream press can exaggerate for their own purposes. To find what was really going on in Thailand, I read through online travel forums and contacted Bangkok-based travel agencies and tour operators to see if they were open and running. I also kept my eye on travel warnings issued by the government.

From what I could discern from these non-media sources, the flooding situation was confined to provinces outside of Bangkok, most of which were not tourist destinations. Central Bangkok was dry and open for business, including the international airport and all domestic flights within the country. The U.K. lifted its advisory to travel in Bangkok a few days before we were set to leave (although the U.S. government had yet to follow suit).

When we arrived in Bangkok, we were happy to find flights were running on time, roads were open, and people were back to work as usual. The only sign of flooding were the ubiquitous piles of sandbags stacked high around hotels, restaurants, piers, and entryways to tourist sites.

Traveling to a country that has been hit by a natural disaster puts you, the traveler, in the driver's seat when it comes to finding deals. You may need to call or email hotels ahead of time to negotiate prices since they are not always listed online.

For example, The Peninsula Hotel Bangkok, a perennial Conde Nast Gold Lister and haven for jetsetters and international business travelers, was not advertising specials on their website. But I knew from my research that occupancy rates at the hotel had fallen by 15 to 20 percent because of flooding. The deals were mine for the asking. We booked a deluxe river-view room, including a full breakfast buffet, for $199/night — a significant mark-down from typical rates at this time of the year, which is high season in Bangkok. We also took advantage of a buy-one, get-one free 90-minute massage in The Peninsula's award-winning spa. Although we found less expensive massages at other massage parlors throughout the city, spending time in zen-like tranquility made the extra cash outlay well worth it. I was happy to hear that the Peninsula was also housing staff members and their families who fell victim to the flood.

Although areas like Chiang Rai and Chiang Mai to the north and Phuket and Ko Samui to the south were completely unaffected by the floods, they were still suffering from a negative post-flood perception problem.

"When you're far away and see these headlines, you may choose Indonesia or some place else to spend you holiday," said Benedikt De Bellis, general manager at Opus One restaurant in Phuket. "People don't realize that Thailand is a big place and that these events don't affect the whole country."

In the north, we spent two nights at the Anantara Golden Triangle, a retreat in the jungle hills of Chiang Saen. The hotel was offering an all-inclusive two-night package which, for $856, gave us a deluxe room, all of our meals (not a bad idea since there are few restaurants in town to choose from), and a choice of one day in elephant training, one half-day in a cooking class, or a tour of Burma, Laos, and the local hill tribes. 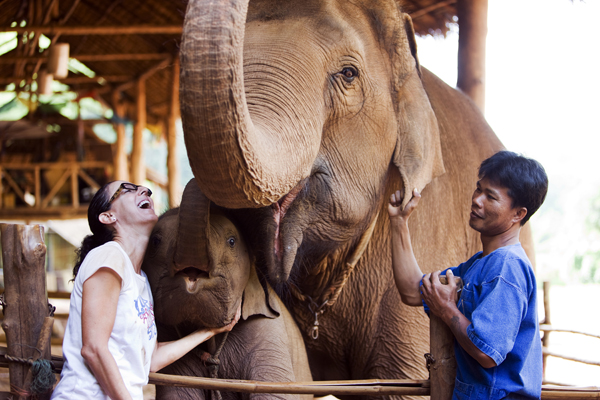 Hanging out with elephants. Photo: Courtesy of Anantara.

Since Anantara is home to Thailand's Elephant Conservation Center, we chose to spend a day with the elephants. Our mahout training was the highlight of our trip. Thanks to our amazing teacher and head mahout, Seng, we were able to get up close and personal with the gentle giants. We were taught the basic commands to steer the elephants on a one-hour trek, which ended with an unforgettable bath in the Mekong River — elephants, riders, and mahouts.

Heading down to the beaches in the south of Thailand, we found the sands relatively empty for this time of the year. Large hotel chains such as the J.W. Marriott and the Renaissance Phuket were offering big discounts to entice guests back. We chose to splurge and stay at the Trisara Phuket, a small, ultra-luxe boutique property that has counted Kate Moss, Demi Moore, and Hilary Clinton as guests. We were not disappointed.

Since the hotel was at full occupancy, I didn't expect much of a discount. Entry-level rooms, each with a private plunge pool, started at $695 per night. The American Express Platinum perks, including a cascading buffet breakfast and a free room upgrade, made the price tag a bit more palatable. The hotel offered a few incentives, including 25 percent off all massages and, for guests staying three or more nights, a complimentary cruise to the limestone caves of Phang Nga Bay on the hotel's sports cruiser.

You wouldn't think airlines would offer much in the way of deals, even in light of a natural disaster. After all, fuel is fuel, and the airlines need to cover their costs. Most of our travel within Thailand was done on Air Asia, the wonderfully thrifty discount carrier (it reminded me of the old People's Express) which runs much like a train service — flights leave every hour or so from Bangkok to other cities in Thailand and around Asia. Getting from Bangkok to Phuket was a mere $50 per person when booked ahead online.

Some of the large carriers like Thai Airways were discounting fares on international routes to entice passengers back to Thailand. Last month, round-trip fares from Los Angeles to Bangkok in economy class were advertised at $1,400. Round-trip seats in business class were advertised at $3,800, about half of what they normally charge. Many of the major carriers allowed passengers to change travel dates without fees or surcharges despite that fact that Bangkok's Suvarnabhumi Airport was operating as normal.

It's wise to check with a doctor to see which vaccinations and other pre-trip health preparations might be necessary. You may also want to check on the health-care component of your travel insurance plan, just in case. Regardless of where I go, I like to bring a first aid kit with me.

It is also smart to check the U.S. State Department website in the weeks prior to your trip. This website provides country-specific travel information for every country in the world, including the location of the U.S. embassy and any consular offices, crime and security information, medical details, and visa details. You can go here to check travel alerts.

I also recommend bringing copies of key documents, such as your driver's license, passport, and toll-free numbers to report lost or stolen credit cards. Some people even recommend checking in with the U.S. embassy or consulate of the country you are visiting so they have record that you are there.

You've seen how I do it. You need to decide whether this kind of trip is for you, and whether the bargains to be had outweigh the potential risks. One thing I do know: If planned and executed properly, chasing the storm can give you the dual benefit of taking a dream vacation and helping to revive a local economy. Not a bad proposition. Just not for the novice traveler.