NEW YORK CITY — Some are calling it the summer of love. Others the roaring '20s. You can feel an infectious (too soon?) joy for the magic that is New York in the summer. We are embracing all that we've missed in the past two years. Concerts. Festivals. Beach days. Roller jams. Mermaids. You name it: New York is alive. ALIVE!

As we navigate these still-weird times and let our freak flags fly, let's remember that kindness and thoughtfulness are always trending.

Now let's get to the fun stuff. 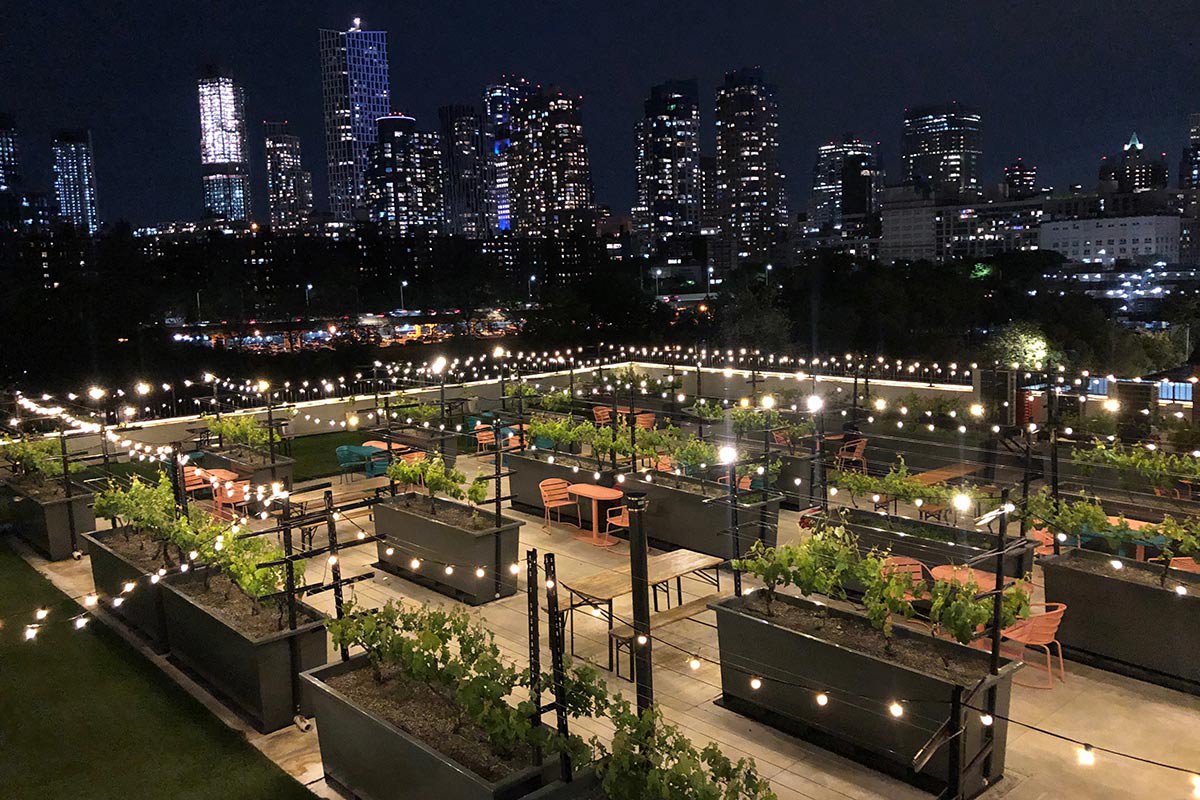 Forget the fancy dinner reservations and social clubs, when it comes to summer in New York City, the biggest privilege is access to a pool. A brand new day spa, QC&NY has opened on Governor's Island with not one but two outdoor infinity pools with panoramic views of Lower Manhattan and the Brooklyn Bridge. To sweeten the deal, there's also saunas and steam rooms along with an Italian cafe with magnificent views. Day rates start at $88 and include access to the entire spa and a roundtrip ferry ticket from Manhattan or Brooklyn.

Throw on your flare pants and give your free spirit a spin on the revived rollerskating rink at Rockefeller Center, Flipper's Roller Boogie Palace. The iconic ice skating plaza was first transformed as a summer roller rink in 1979 by Ian "Flipper" Ross, who brought the disco-queen culture to Midtown for three years (when Studio 54 was at its heyday). In the spirit of the summer of love, the rink is back with tunes (with "boogie" in the name, the expectations run high), kaleidoscopic light shows, and a pizza truck. Timed tickets must be reserved online and start at $20. Some proceeds support the Saks Fifth Avenue Foundation, a mental health non-profit.

Every summer, New Yorkers head to the roof for cocktails and a breeze, and now, vines. Rooftop Reds is the first rooftop vineyard to open in NYC at the Brooklyn Navy Yard. Two hundred grapevines grow in the 15,000-square-foot space with seating throughout and panoramic views of the Manhattan and Brooklyn skylines. To kick off their first summer, the vineyard is hosting several events, including Ribs & Rosé (every third Sunday from June through September) and movie and pizza nights (Thursdays), late-night chocolate and wine tastings (Fridays and Saturdays, ongoing), and Wednesday night vineyard tours with cheese pairings.

A Rockaway beach day is a summer essential — and now a way to support a great cause. The Campaign Against Hunger has opened a new café in Far Rockaway, Beach Dunes Eats and Arts, with all profits donated toward the organization's efforts to support food insecurity in NYC. The affordable menu — portable sandwiches and picnic goods for the beach — is focused on seasonal ingredients from urban farms and products from local businesses. The space will also serve as a culinary hub for aspiring chefs.

In an effort to revitalize and celebrate the city's fitness community coming out of the pandemic, NYC is hosting its first-ever Fitness Week. Purchase a buy-one-get-one-free deal to work out at a variety of studios and gyms across all five boroughs and explore a new way to sweat in the city (aside from the inevitable walk to the subway). The event is supported by several organizations to improve fitness accessibility for everyone.

You've seen all the shows, collected the Playbills, and memorized every song. Now head to the new Museum of Broadway dedicated to it all. The interactive experience highlights Broadway's star-studded history from its birth to the present, explores how the theater has traveled all over NYC's map, and lifts the show curtain to give you a peek at what goes into making a theatrical experience.

If rosé-all-day is your summer vibe, snag a pool pass to The Summer Club, a newly opened rooftop day club with a 50-foot outdoor pool atop Ravel Hotel in Long Island City. Live DJs will spin until the sun goes down as frozen cocktails make the rounds. To have your own retreat from the party, several private shaded cabanas are available to rent. A day pass costs $75 and includes pool access, a towel, and a lounge chair. Private cabanas start at $375 and go up to $750.

Don't miss The New York Botanical Garden's special summer exhibition, Around the Table: Stories of the Foods We Love, a look at centuries of local and global foodways and food traditions. The library has a collection of vegetarian cookbooks (look for hand-written notes in the margin, and notice how much and how little recipes have changed since the 1800s), and the grounds and conservatory are filled with the plants we eat — pretty purple peppers, bronze fennel fronds, fields of sorghum, as well as rice, bananas, beans, and more. Do a deep dive into African American food traditions at the special exhibition African American Garden: Remembrance & Resilience. Seasoning the whole show are fun and interesting tables created by 30 local Bronx artists, all with food themes. On display until September 11, 2022.

Summer in New York is all about spontaneity, especially when that involves free outdoor events. Bryant Park is bringing back its free-to-the-public Picnic Performances throughout the summer with three orchestrated operas:The Barber of Seville on May 27, La Traviata on August 12, and Lucia di Lammermoor on September 2. Afro Latin Jazz Ensemble kicks of Carnegie Hall's July musical series on July 1. Other musical highlights include Latin Jazz legend Bobby Sanabria and his 21-piece Multiverse Big Band (July 23) and Habibi Festival, a Middle Eastern and North African music showcase on August 26. The American Symphony Orchestra will cap off the musical summer with a celebration of its 60th anniversary on September 17.

SummerStage is reviving its free Central Park concerts, showcasing established and emerging artists across all genres: salsa, jazz, hip-hop, indie rock, reggae, and Afrobeat. This summer's highlights include Modest Mouse, Big Freedia, Fitz and the Tantrums, and a screening of Summer of Soul, the behind-the-scenes documentary about the 1969 Harlem Cultural Festival that brought Nina Simone, Mahalia Jackson, and Stevie Wonder to Harlem and won Questlove an Oscar.

Governors Island's most glamorous fete, the Jazz Age Lawn Party, returns this year and is set to revive the roaring '20s across New York. Live jazz will fill the sprawling dance floor all day, as food trucks serve fancy picnic fare and Prohibition-style cocktails throughout the park. C.O. Bigelow will set up a pop-up lounge to refresh, with rose-themed products between swing acts.

Brookfield Place unveils its second summer pop-up, Portside, a new outdoor waterfront coastal retreat meant to resemble a nautical summer house by the shore, with pop-up vendors, oyster shucking classes, knot tying, and outdoor concerts. It's the perfect post-work retreat to kick off the summer and feel like you're in the Hamptons — without sitting in torturous hours of traffic on the LIE.

Unpack your costume box and stock up on glitter: The largest art parade in the United States, Coney Island Mermaid Parade, draws over half a million people and returns after a two-year hiatus to celebrate its 40th anniversary and kickoff the start of summer. On Saturday, June 18, thousands will flock to Surf Avenue — Coney Island's main drag — to watch King Neptune and Queen Mermaid process the boardwalk, making their way to Steeplechase Plaza with thousands of glitter-adorned sea creatures in tow. The celebration is simple: to cheer and honor individuality, artistry, and self- expression. While you're there, take a spin on Coney Island's iconic Cyclone rollercoaster, which is celebrating its 95th birthday this summer, or its newest, The Phoenix, a suspended steel thrill ride that’s inspired by Coney Island’s history as “the people’s playground.”

The immersive augmented-reality art exhibit, Arcadia Earth, designed to inspire environmental action, returns with 15 rooms designed to spotlight the dire changes the planet is facing (climate change, overfishing, food waste) and inspire action. A ticket to the exhibit supports Oceanic Global, an organization devoted to healing and raising awareness of the ocean's aquatic ecosystems. As an extra nice bonus, a tree will be planted for every ticket sold.

To pair your summer fun with the latest restaurants, bars, and art galleries in NYC, head to this guide: The Reboot: What's New in NYC