Travel writer and author Jo Piazza met her husband on a boat in the Galapagos Islands while on assignment as the managing editor for Yahoo Travel. Three months later — after five dates in New York, San Francisco, Joshua Tree, Corsica, and Paris — they got engaged. Terrified of failing at her first year of marriage, Jo used her job as a travel editor to crowd-source marriage advice from around the world. The result is How to Be Married: What I Learned from Real Women on Five Continents About Surviving My First (Really Hard) Year of Marriage, a hilariously candid and raw account of her the newlywed year. Along the way, Jo lost her dream job and learned she had a rare genetic form of muscular dystrophy. As a way of testing her new marriage and her physical abilities, she set out to climb Mt. Kilimanjaro with her new husband. This is an adapted excerpt from How to Be Married.

I really wasn't in good enough shape to be climbing a mountain. And yet there I was, huffing and puffing my way to the summit of Mt. Kilimanjaro, the highest peak on the African continent, with Nick, my brand new husband, leading the way.

That's the reason we were making this climb, to prove I was still strong. That my body still worked the way I wanted it to.

A month earlier, an uncomfortably chirpy genetics counselor named Violet told me I had a mutation on my fourth chromosome, the same genetic anomaly that caused the muscular dystrophy that was killing my father.

My dad, once a tough and virile guy who loved golf and dancing with strangers, first experienced symptoms of the disease right before he turned forty (I was 35), and the progression of his condition was long, slow, and excruciating. By the time I got married, my dad was confined to a hospital bed in the living room of my parents' house, unable to walk, stand, or breathe on his own. For my mother, the lines between wife, caretaker, and servant became invisible, a fact that eroded their marriage as well as her own mental and physical health. 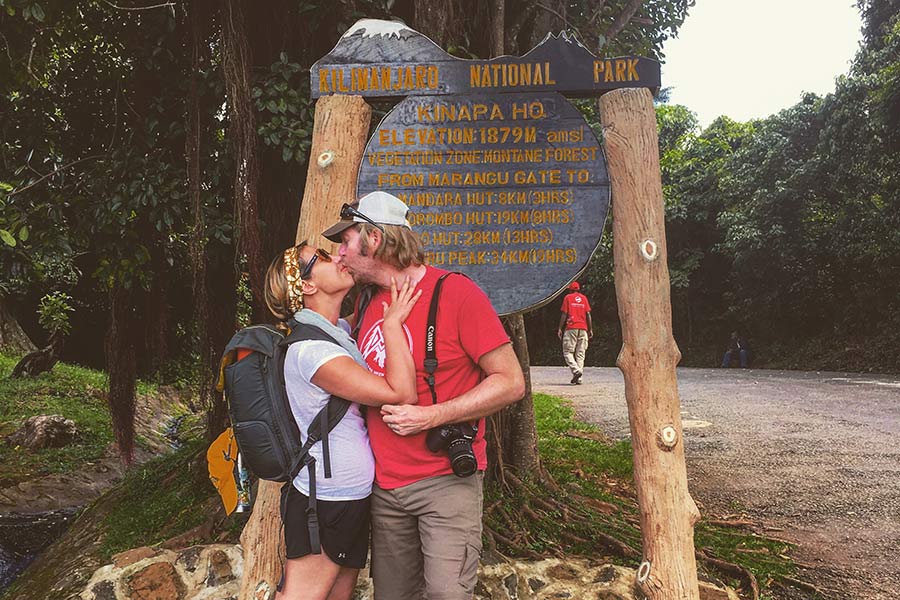 Jo Piazza and her husband Nick at Kilimanjaro National Park.

My mother's life, the life of a dutiful but miserable caretaker who changed the diapers of an adult man and spoon-fed her husband with barely concealed disdain, wasn't something I wanted for Nick — not now, not ever. Panicked in the days after my diagnosis, I told my new husband — a man who loved riding bikes, hiking, skiing, climbing things, and doing anything with a healthy pair of legs — to leave me so he could have a normal life. In that moment, I felt ruined, damaged, and powerless.

"Divorce me. Seriously," I muttered to Nick after I spoke to Violet. "I mean it. You didn't sign up for this. Find someone else. Find a healthy wife. I don't want you to have to take care of me."

"You're ridiculous," Nick stated with his trademark Midwestern certainty, sitting beside me and placing one of his bear paw hands on my back. His default is calm and cool, while mine leans toward hysterics.

"I'm honest. I'm being honest." Stop, I thought. Just stop. But I couldn't. My eyes stung, my voice shook, and my heart slammed into my throat.

"I signed up for you. Whatever that takes. I want to take care of you," he whispered. "I'll carry you around if I have to."

That's when Nick started talking about doing something big and scary and hard and physically taxing on my still fully intact body.

"We could climb a mountain," he suggested. When I suggest things, I Google them and talk about them and rarely do them. When Nick suggests something, he means it.

We flew to Tanzania.

My father hadn't left his hospital bed in six months. He could no longer breathe on his own, and without the aid of an oxygen machine, he would suffocate. He wore diapers for his constant diarrhea and was frequently nauseated and stricken by intense bouts of pain and headaches that made him black out. It wasn't lost on me that the symptoms of altitude sickness I could experience on Mt. Kilimanjaro mirrored his daily existence.

Nick outpaced me on the trail, often leading our small group of hikers up the mountain. I wanted to call up to him, but I was reluctant to slow him down. 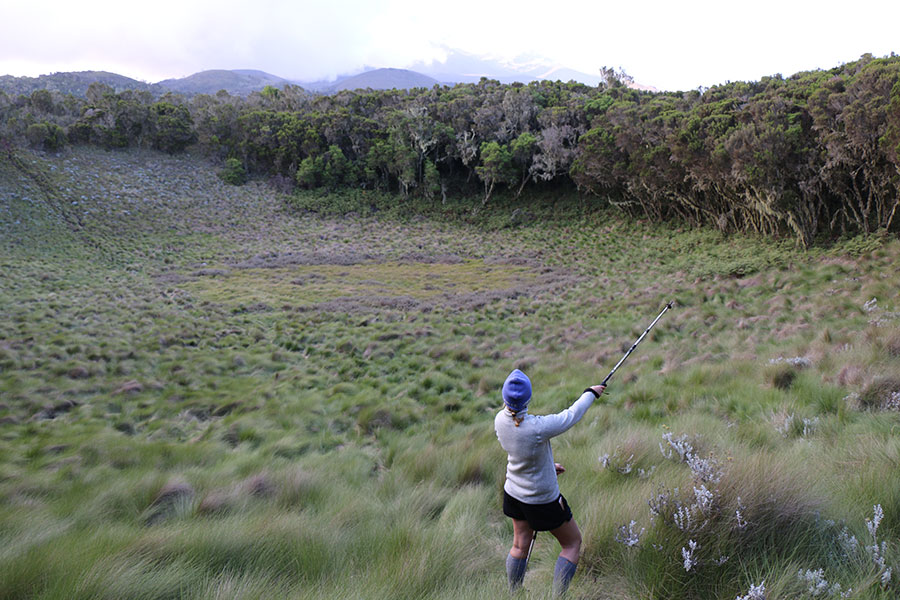 A moment of triumph.

Once everyone fell asleep after an endless first day of hiking, I began to weep. It was freezing and the door to our hut would stay closed only with three backpacks piled in front of it. My feet had been torn to shreds that day by boots just a touch too tight. My breathing was labored from the altitude and a dull ache had formed just behind my eyes. I couldn't imagine how I would endure three more days of this. I read the graffiti on the wall over my bed:

I made it to the top but it was so hard.

It's cold and long and endless. We smell like shit, look like shit, and really need to take a bath.

Don't do it. Stay here. I wanted to die.

I climbed unsteadily down from my bunk and sat on the floor, stroking Nick's forehead to wake him up. His skin was warm under my cold hand.

"I'm not okay," I whispered. Tears streamed down my face. "Can I climb into your sleeping bag?"

"Squeeze my hand," Nick whispered, his face lit softly by a small sliver of moon coming through the hut's solitary window. "Squeeze it hard. Like you mean it." I squeezed as I crouched there, crying and staring through the window at some of the most magnificent stars I'd ever seen. Nick unwrapped himself from his own warm sleeping bag and led me back to mine. He sat with me until I fell asleep.

Nick slowed down with me the next day. He carried my pack and stole a salt shaker from the mess hut so I would stay hydrated, as well as napkins from the other trekkers so I'd never run out of toilet paper.

"Pole-pole," Nick insisted to the guides. It meant "My wife needs to go slow" in Kiswahili. Picture the movements of an arthritic septuagenarian: That was the pace my body preferred. We fell in step with a group of geriatric Japanese wearing ski goggles and face masks.

On the path, Nick invented a whimsical song to keep me going. The words made no sense but it had a rhythm that matched the click, click of my walking sticks.

By the close of day three, going pole-pole, I felt a surge of adrenaline and pride. We'd ascended thousands of feet, slowly but surely, to land at an altitude higher than I'd ever been. My body was strong. 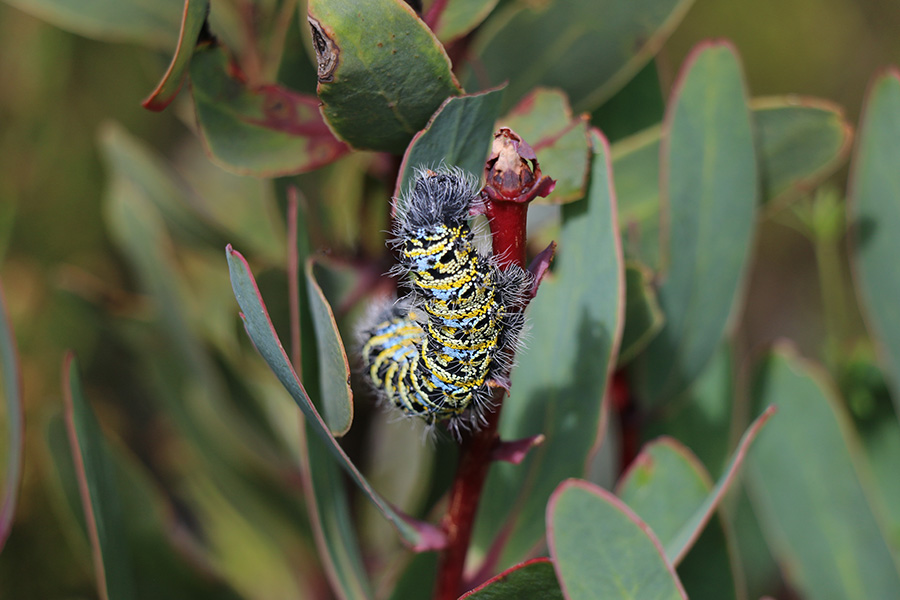 Making friends along the route.

The highest summit of Kilimanjaro is called Uhuru, which translates to "freedom."

On the fourth day of our climb, it was plainly in sight, so close we felt like we could reach out and touch it. I ran toward it, spreading my arms and doing a silly dance through a grove of giant groundsels, alien-looking trees found only on Kilimanjaro above fourteen thousand feet.

Taking a thousand selfies with the peak distracted me from the fact that my husband had slowed down.

We were in the alpine desert, so close to the final ascent when Nick felt the effects of the altitude in new and severe ways. It began when he hallucinated that he saw a fish smiling at him from on top of a very large boulder.

"He's laughing at me." He pointed. "That fish is mocking me." I brushed it off as another of his attempts to make me giggle in an uncomfortable situation.

Next, his head began to throb and his stomach heaved.

"I don't feel good," he whispered reluctantly. "It's getting worse and worse."

I sat in the sand and pulled Nick down beside me. I could smell myself and wondered if he could, too. In the dark of night, I'd accidentally dropped my deodorant and other toiletries down a toilet that was more of a hole in the ground.

We hadn't showered in four days, and the sweat on our bodies had frozen, unfrozen, and refrozen over and over again. 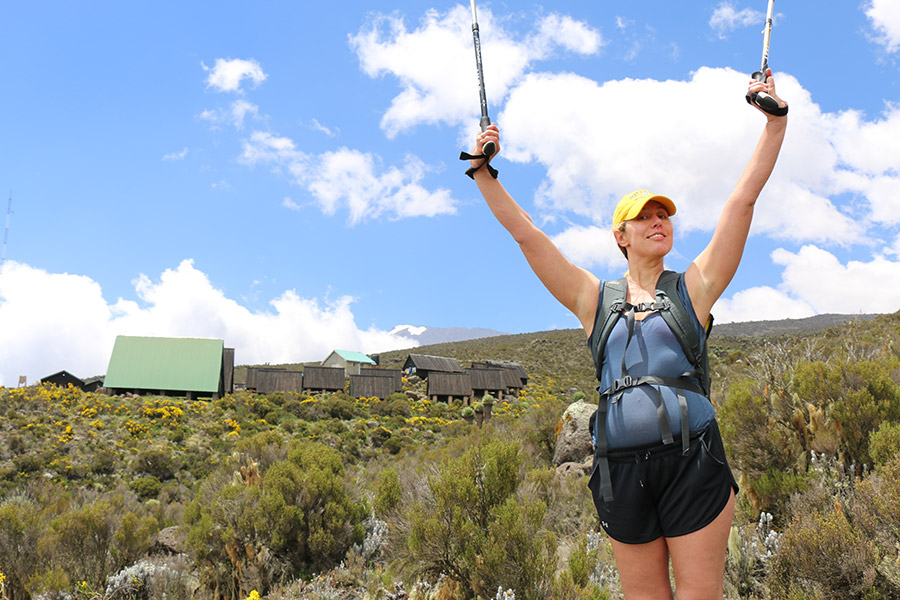 That feeling when adrenaline meets pride.

As we sat there, four guides silently wheeled a metal stretcher past us. Lying down on it was a lumpy, vaguely human form, sheathed in a sleeping bag cocoon, an oxygen tank clanging against the rusted metal of the stretcher.

I couldn't tell if he was lying.

Nick looked at me, his handsome features contorted and strange, his blue eyes, usually curious and alert, were dulled and his jaw was tense and tight. "I need to go down."

I placed my hand on Nick's arm. "Are you sure?" I looked at him. I saw him vulnerable for the first time since we'd met.

"You can keep going," he said. "You're doing great. Keep going."

I could have kept going. Thanks to Nick's slowing down, carrying my pack, and sneaking me extra food, I finally felt strong enough to make it to the summit. My ego wanted me to keep going, but I wasn't about to abandon my sick husband on the side of a mountain in a foreign country, scared and alone. "I feel like a chump," Nick said, wincing from the pain and closing his eyes.

"I've known a lot of chumps, and you're the best one I know," I said and stroked his back. For the first time since we'd been married, I realized that part of choosing to spend your life with someone was choosing to take care of them.

I pulled Nick to his feet and picked up his pack. "Let's get out of here," I announced with unexpected confidence. "I'll carry you if I have to." 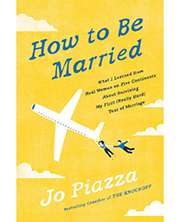 Don't stop there. Buy How to Be Married, by Jo Piazza.

Jo Piazza's Travel Bucket List
How to Be Married: A Review
More Travel Books on Fathom

Excerpted with permission and modified for length from How to Be Married, Copyright © 2017 by Jo Piazza. Published by Harmony, 2017.