LONDON – Visitors to London are spoiled for choice when it comes to fantastic hotels, so I am always on the lookout for the latest, greatest, newest offering when I return to this city that I consider my second home. I tend to stay in more residential areas — Chelsea, Kensington, Notting Hill — but my latest favorite find is in the heart of Mayfair, tucked away on sweet Half Moon Street. I literally can't stop raving about this hidden gem.

Originally opened in 1851, Flemings Mayfair was converted from thirteen adjoining Georgian townhouses, which gives it an intimate, smaller feel than the other surrounding luxury hotels. I love the warmth of the place — the very personal greeting at check-in, the helpful concierges, the bartender in the Drawing Room who was happy to replenish my endless pots of tea — as well as the ease of access to everything from Piccadilly and the Green Park tube to the restaurants and shops of tony Mount Street.

Flemings Mayfair, which is still a family-owned hotel (a rarity in the luxury space) achieves the perfect balance of being very high-touch yet perfectly low-key. 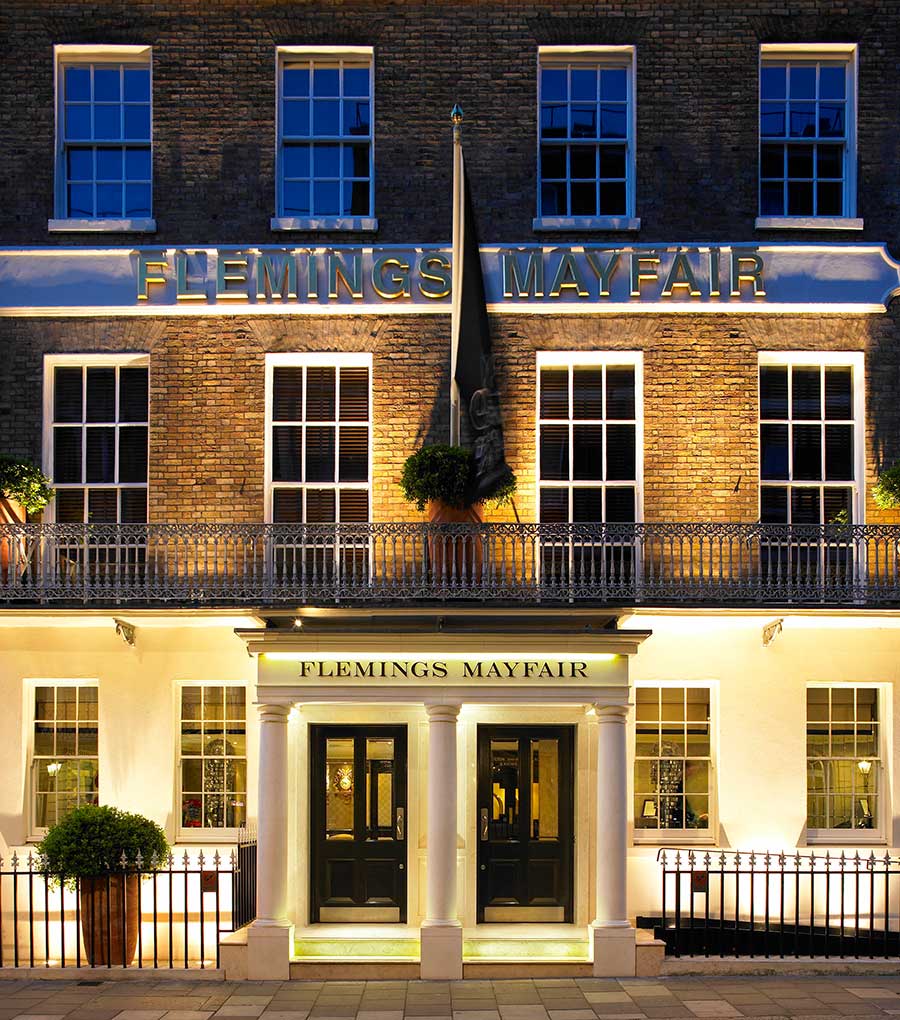 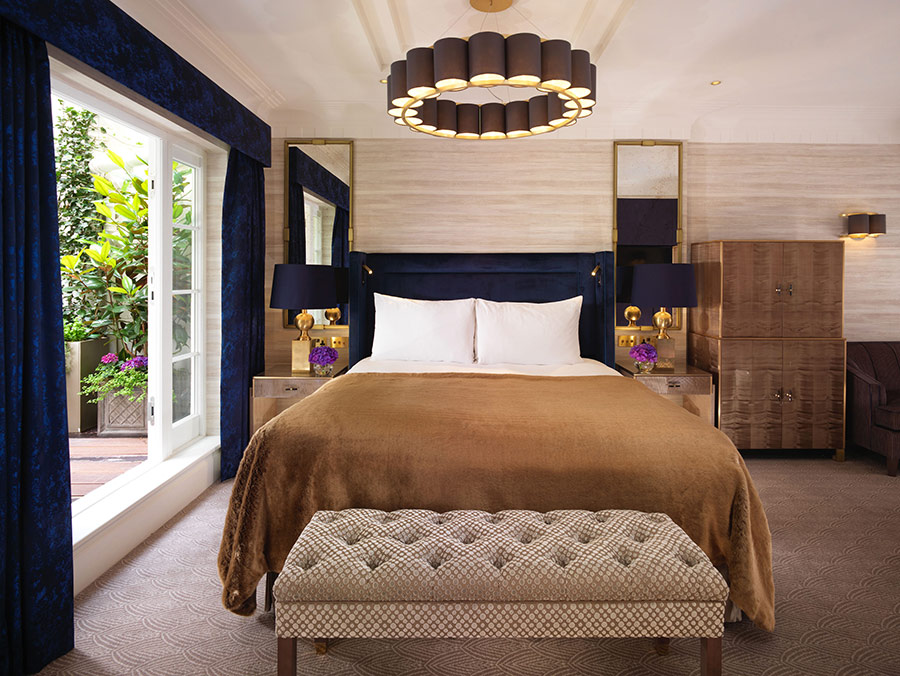 Rooms are elegant and cozy.

Location
Just past Park Lane, mere steps from Green Park, Flemings Mayfair is set on quiet Half Moon Street, with several private apartments accessed by Clarges Street just round the corner. The surroundings feel very local and touristy at once, given the number of nearby sites. There's a small café at the end of the street, an independent bookseller and, Kiku, a delicious off-the-radar Japanese restaurant next door. Best of all, a mini Marks & Spencer around the corner carries the edible essentials (prawn crisps, chocolate chip cookies) that you might crave. Its location between Park Lane and Berkeley Square means multiple tube possibilities. Getting around on foot couldn't be easier.

Hotel Style
The hotel recently received a £14 million facelift courtesy of London-based interior design firm Tully Filmer. The results are a series of serene spaces throughout the 129 guest rooms, the jewel box Drawing Room bar, and subterranean Ormer Mayfair restaurant and Manetta's Bar. The sleek furnishings are in neutral hues, with the punches of aqua and rose gold adding cheerful flair.

High-ceilinged bedrooms often include Art Deco touches like desks and custom chairs made of dark sycamore as well as contemporary photography by Andy Gotts, MBE. The juxtaposition of the artist's portraits of Kate Moss, Kylie Minogue, Harrison Ford (many taken at the hotel) with period finishes isn't totally obvious, but it adds to the overall fun, personalized approach of the hotel.

This Place Is Perfect For
Flemings Mayfair is ideal for the business traveler because of its easy access to the City and surrounding Mayfair, and it would work equally well for the well-heeled tourist interested in the many excellent museums, restaurants, parks, and shops nearby.

What's on Site
The striking restaurant in the basement, Ormer Mayfair, helmed by Michelin-starred chef Shaun Rankin, is definitely a highlight. The inventive menu is full of Jersey-grown produce, meat, and fish. I loved the breakfast spread (excellent charcuterie and gluten-free options) as well as one late-night dinner of sweet lobster ravioli in crab and tomato bisque with shallots, followed by a dark chocolate brownie with sticky popcorn, salted caramel sauce, and ice cream. Nirvana! The wines selected by award-winning sommelier Andreas Rosendal were outstanding. Oenophiles will love selections like the magnum of 2009 Classic Cuvee from English estate Nyetimber, which can be enjoyed by the glass. Keep drinking at dark and moody Manetta's Bar, where the walls are lined with portraits of famous literary figures of yore like Gertrude Stein, Alice B. Toklas, and Oscar Wilde.

My favorite part of the hotel is the Indian-inspired Drawing Room, done in conjunction with The East India Company. It's the perfect place to sip Darjeeling and work on the laptop. Hand-painted de Gournay wall panels in jewel tones, velvet seats, shelves of Assouline books, and a crackling fire add to the clubby ambience.

While I am not likely to use it, I am a fan of having a gym on premises (option value when dealing with jet lag), and the gym here is clean, light, and state-of-the-art. Nothing over the top — just four machines, sets of weights, and a TV — but it is a rare find for a hotel of this size in central London.

Number of Rooms
There are 129 bedrooms, suites, and apartments, with a top floor penthouse that sleeps six and has a private lift and roof terrace for entertaining al fresco. The Townhouse features several beautifully appointed bedrooms and can be booked in a series of suites or taken over as a whole property. Junior suites and studio suites, as well as one-, two-, and three-bedroom apartments accessible via Clarges Street round out the slightly quirky offerings. This lack of uniformity adds to the charm: No two rooms are exactly alike, and you feel like you're staying in someone's opulent, velvet-swathed home, circa 1932, if 1932 had modern everything.

In-Room Amenities
The mark of any good hotel is free, excellent WiFi, and Flemings Mayfair has this covered. Ditto the mini-bar stocked with Cadbury's chocolate and the vast marble bathrooms with Miller Harris amenities. Discreet flat-screen TVs include hundreds of channels (literally) and don't detract from the Zen design scheme. If you don't want to lose yourself to the tube, spend a few hours flipping gorgeous hardcover volumes of Penguin classics. While it may be hipped-up, this is England, so there is definitely no yoga mat in the closet.

Perhaps the most unique in-room offering is a complimentary gin bar. I can't stand the stuff, but the idea of my own bar comprised of five different gins (including Flemings' own signature blend) curated by spirits experts Joel Harrison and Neil Ridley almost won me over.

Drawbacks
The only drawback is that some of the rooms are a bit small and dark side. This is London, so many of the rooms are courtyard-facing, and on a dreary day…well, it can be a bit dreary. Looked at another way, these same rooms are particularly excellent for quiet, uninterrupted sleep.

Standout Detail
The standout details for me all involved impeccable service: the helpful front desk person who graciously checked me in at 11 a.m., even though I wasn't due until 2 p.m. Another striking personality was the bartender in the Drawing Room, who happily accommodated everyone from afternoon tea drinkers to late-night champagne enthusiasts. I cannot forget the concierge who arranged for the delivery of my work-related packages to various locations throughout the city, seemingly free of charge (I'm still waiting for this bill). 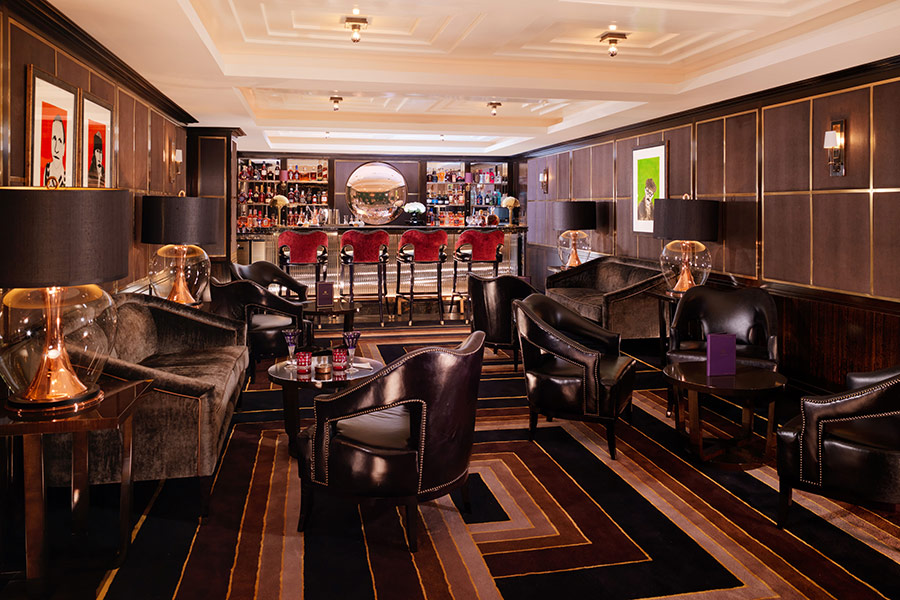 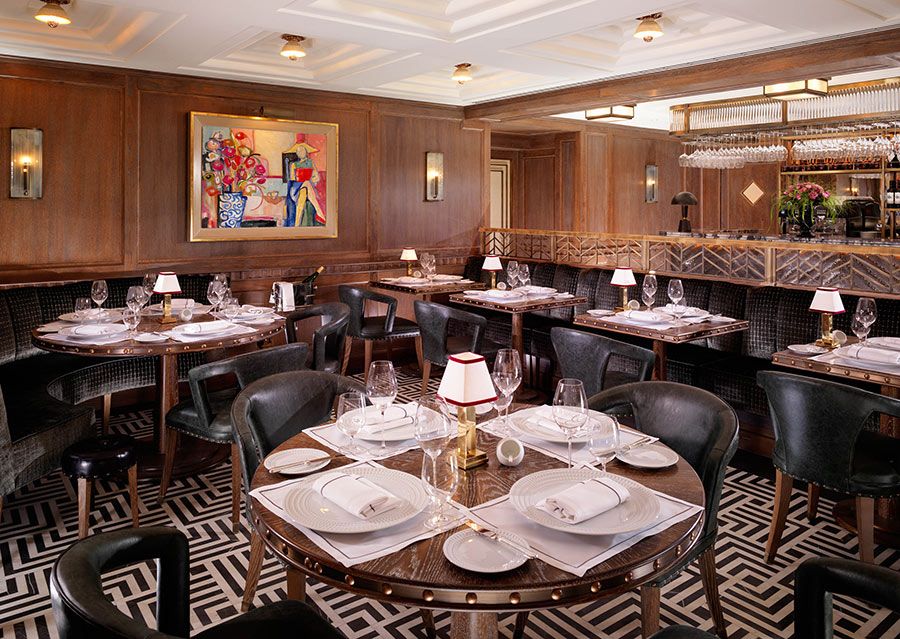 Lunch from another era. Photo by Niall Clutton.

Mayfair has it all — great shopping, beautiful Georgian architecture, picture-perfect mews, and some of the world's finest museums and restaurants. There is a mix of outdoors — parks, sidewalk cafes, and the ubiquitous pubs that spill out in the streets in warm weather — as well as culture, so there is literally something for everyone within a half-mile radius of the hotel.

What to Do Nearby
This is prime London park territory, and two of my favorites — flower-filled Green Park and St. James' — are basically across the road, and Hyde Park is a stone's throw away. Nearby museums include Buckingham Palace, The Royal Academy of Art, The National Gallery, and The Wallace Collection.

Some of the world's best galleries are in Mayfair, including David Zwirner, Gagosian, and the recently opened Marian Goodman Gallery. Shoppers will be in heaven with everything from the established luxury houses along Bond Street (Chanel, Bulgari, Hermès) to more niche finds like the French designer Vanessa Bruno, whose two-story shop on Grafton Street is full of chic, functional finds. Selfridge's, with its impressive food hall and endless array of clothing and accessories, is still the superstore to end all superstores.

The restaurant options within a half mile span the globe from Italian to Lebanese and range in style from scene-y (Asian fusion Sexy Fish) to classic (Scott's, The Wolseley, Helene Darroze at the Connaught, and The Ritz), to cheap and cheerful (Itsu). In terms of (relatively) newer area additions, Mount Street Deli is the place for a casual breakfast, with its beautiful flora outside, while lunch at Selfridge's — particularly when they host interesting pop-ups, like Dan Barber's recent wastED residency — is always worthwhile. High tea feels like an American construct, but if you must, there is no better venue than Claridge's: The pastries, sandwiches, and fresh infusions in that magical, Art Deco setting just can't be beaten.

Lunches in Mayfair can vary between an affordable chicken schwarma wrap and a full-on, four-course feast at La Petite Maison, a Provençal delight tucked just behind Claridge's. Another long-standing gem is Ikeda on Brook Street, where you'll find seriously authentic Japanese food with little fanfare. The best tables in this part of town include members clubs like 5 Hertford, The Arts Club, and George, so if you can score an invitation, know that the quinoa salads and people-watching are both unparalleled.

Evenings should always include a drink at The Connaught Bar — the best ambience in London, I think — followed by dinner at Sexy Fish or Roka (for sushi) or at Fera at Claridge's if you're feeling seriously adventurous (be prepared for funky, foraged ingredients). The classics remain just that, and the Dover sole at Scott's and contemporary Indian cuisine at Gymkhana are all worth a stop.

Good to Know
I wish I'd known about this hotel earlier, as it really offers good value for money. It is chic, quiet, understated yet luxurious, with perfect attention to detail. I would also highlight the restaurant — and not just to hotel guests — as I feel it gets a little lost for its underground location. Which is too bad, as it is a remarkable culinary experience.