Fathom's Daniel Schwartz is a '90s kid, which means his most common associations with New York City's Greenwich Village are Friends and fancy restaurants. Recently, he took a really good walking tour and rediscovered the neighborhood.

NEW YORK CITY – As a native New Yorker, I'm well aquainted with Greenwich Village, the neighborhood between 14th and Houston from Broadway to the Hudson River. As a millennial, that means I really only know about the area's trendy restaurants, buzzy bars, and can't-miss landmarks. Ask me about its history and I draw Bob Dylan and many, many blanks.

In a recent attempt to learn more about the neighborhood, I did a one-night staycation at The Marlton, that charming hideaway on 8th Street. (Sometimes, you need to break from routine to notice what's right under your nose.) My game plan: Wake up late, Instagram an avocado toast from Margaux in the lobby, and take a beatnik-era history tour with Free Tours by Foot.

To be clear, these tours are tailor-made for tourists, but taking one was a great way for me to explore a neighborhood I thought I had all figured out. And it only helped that my guide, John Gallagher, was phenomenal. The long-time village resident turned Brooklynite is an actor with appearances on Law and Order, Curb Your Enthusiasm, and The Darjeeling Unlimited. He brought history (and this story) to life. 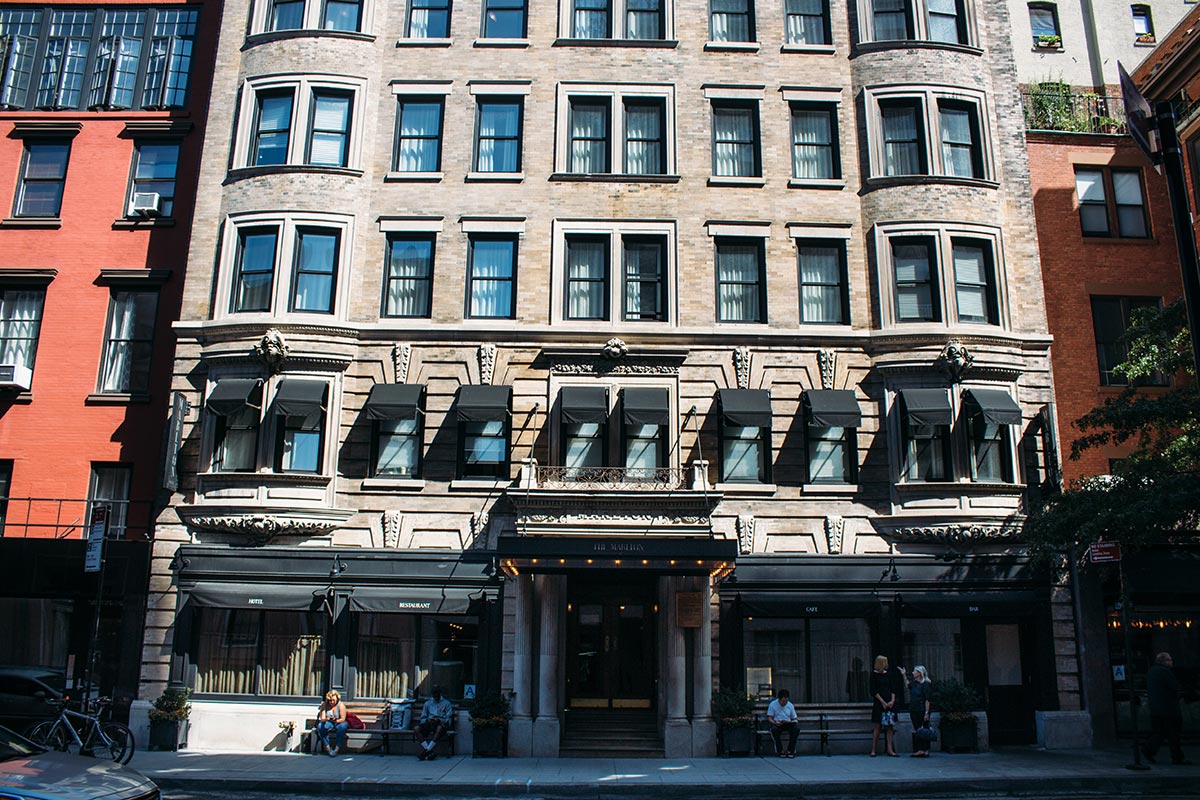 The tour kicked off with the hotel. Until its revamp in 2012, The Marlton Hotel was The Marlton House, a single room occupancy hotel built in 1900 that was known for housing artists and actors, many of whom became famous during the Village's mid-century bohemian scene. Jack Kerouac wrote The Subterraneans and Tristessa while living at The Marlton. Valerie Solanas, who shot Andy Warhol in his studio in Union Square, lived in room 214. Neil Cassady, Maggie Smith, and Julie Andrews were all notable guests.

Sensing an infatuation with the era, Gallagher made it clear: Those were just the brochure highlights. In reality, conditions in the building were less than luxurious for much of the 20th century — cramped quarters, shared bathrooms, the resident boozer on a bender. John Barrymore hid from Hollywood execs at The Marlton on tears through the village. Lilian Gish lived in 408 and cooked tinned goods with a sterno lamp to save money.

We walked down Fifth Avenue toward Washington Square Park, one of the snazziest stretches in the city, while Gallagher hammered home the point that Greenwich Village wasn't always the gentrified wonderland it is today. It was first seized from Native Americans by the Dutch, who turned the pasture into tobacco plantations and leased the land below Washington Square Park to freed black farmers to buffer themselves against the tribes they pissed off next door.

The village turned into a quaint country suburb under the English, and, after the American Revolution, a popular spot for a patrician's summer home, given the good breeze. Manhattan is one long hill — the farther up the island they built, the farther they got from the commotion of New York City, which had been expanding from Wall Street, the original city limit. By the 1820s, this area was the place to be to outlast yellow fever. By 1827, the Land of the Blacks, which was concentrated around Minetta Lane, had developed into a strong African American community. (Take that, New Amsterdam.) 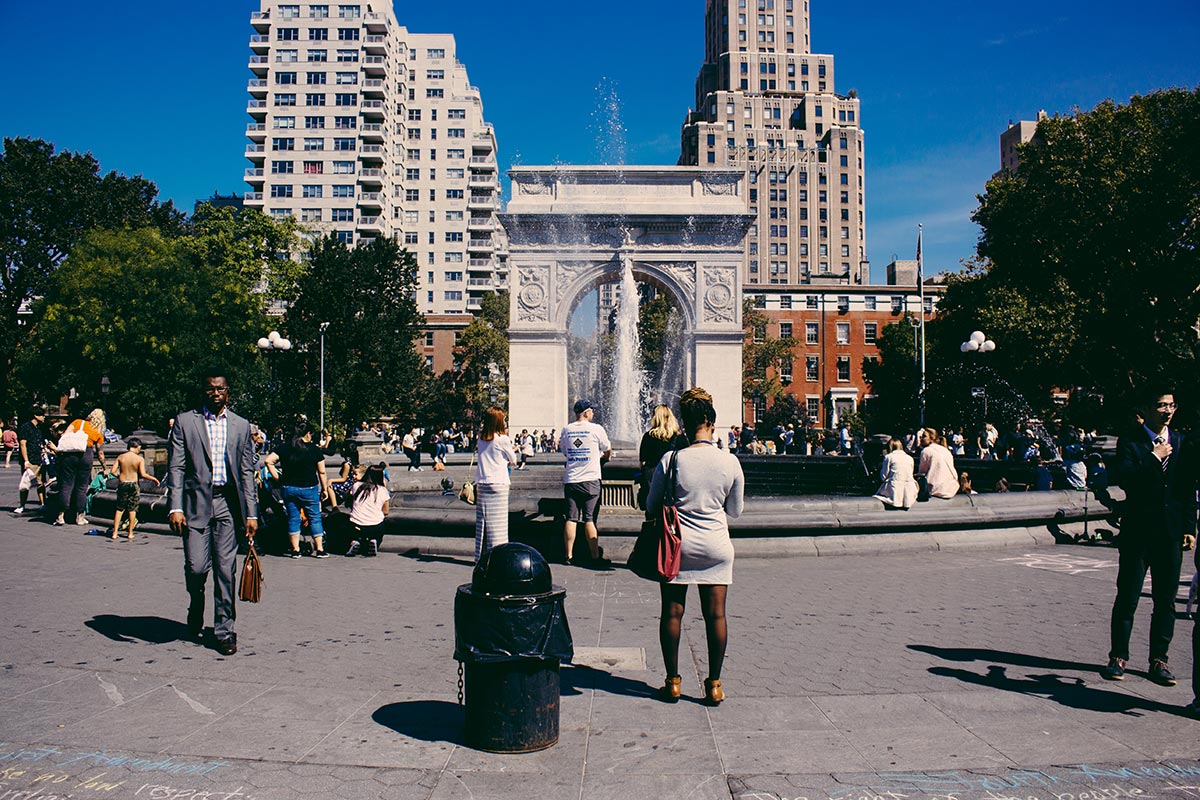 This was all farmland. 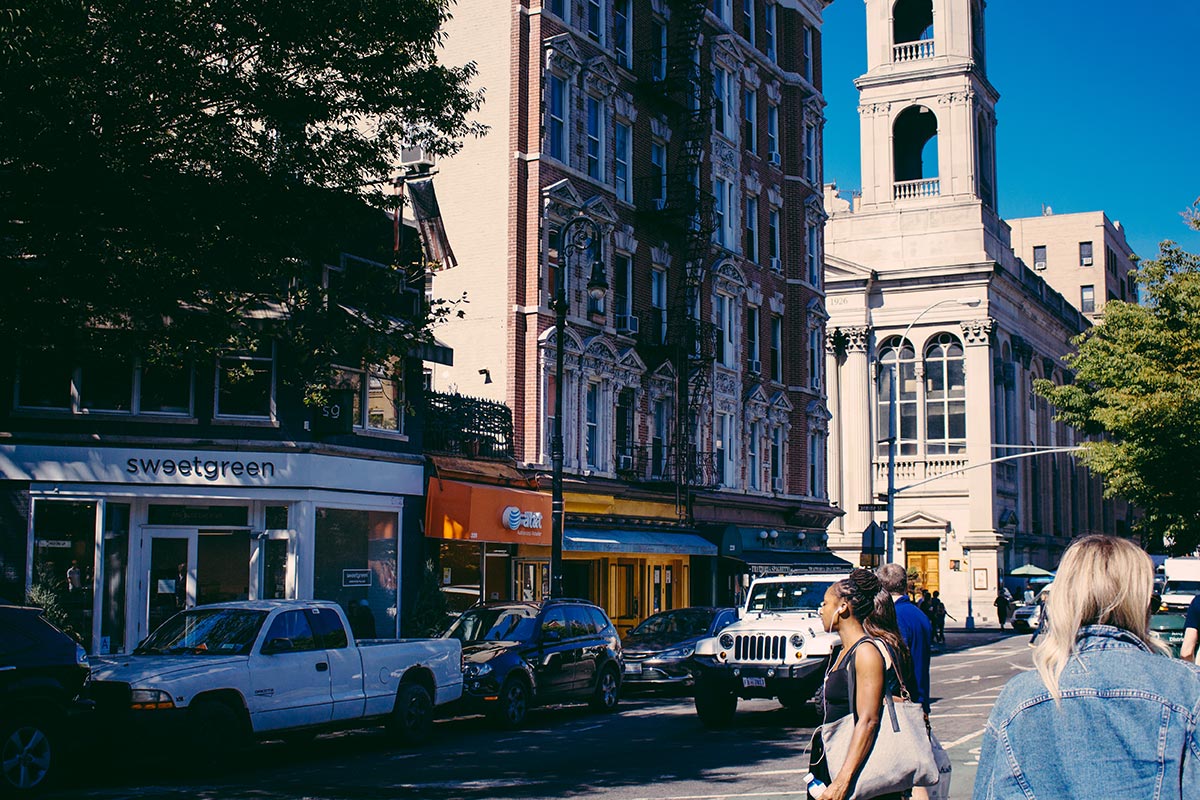 This was all Little Italy.

Then came the Industrial Revolution. As the gentry drifted uptown, village plots were divided and warehouses were built to accommodate the massive influx of Irish and Italian immigrants. Little Italy used to stretch from Mulberry to the Hudson River. In the West Village, we stood in Father Demo Square, staring up at Our Lady of Pompeii Church, while Gallagher told us about Charlie Zito's (closed since 2004), which used to ship bread to Sinatra in Vegas. I couldn't believe I had overlooked the signs.

As the 19th century turned into the 20th, the village became an incubator for counter-cultural happenings. Experimental theaters, avant-garde galleries, and small-press publishers started to pop up. Mark Twain, Herman Melville, and Edgar Allen Poe lived in the village and took summer vacations in Brooklyn Heights, once an elevated countryside escape.

But it wasn't until after the tragedy of the Triangle Shirtwaist Factory fire (on Greene and Broadway), the bloom of the middle class (workers rights!), the post-WWII exodus of the textile industry from Soho, and the ensuing availability of affordable loft housing that the bohemians (read: poor artists) we're all familiar with entered the scene.

It was cheap in Greenwich Village back in the day. Cheap enough for artists to comfortably chit-chat the day away at Caffe Reggio. We got the low-down while walking by those sex shops on Sixth Ave. and West 4th: a tab of LSD used to be 75 cents, a pitcher of beer was $1, an ounce of weed, $14. We paused in front of Bob Dylan's old apartment (161 West 4th St.; top floor), which cost him $19 a month.

We stopped again on Macdougal Street, down the block from the trendy sensation that is by Chloe, where I had flashbacks of a New York era I didn't even live through. The street fashion when Mamoun's falafel cost 25 cents. The smokey nights when young Jimi Hendrix played at Cafe Wha? The responses Steven Stills (of Crosby, Stills & Nash) would get when he used to busk for hours just to get enough money for a hot slice. 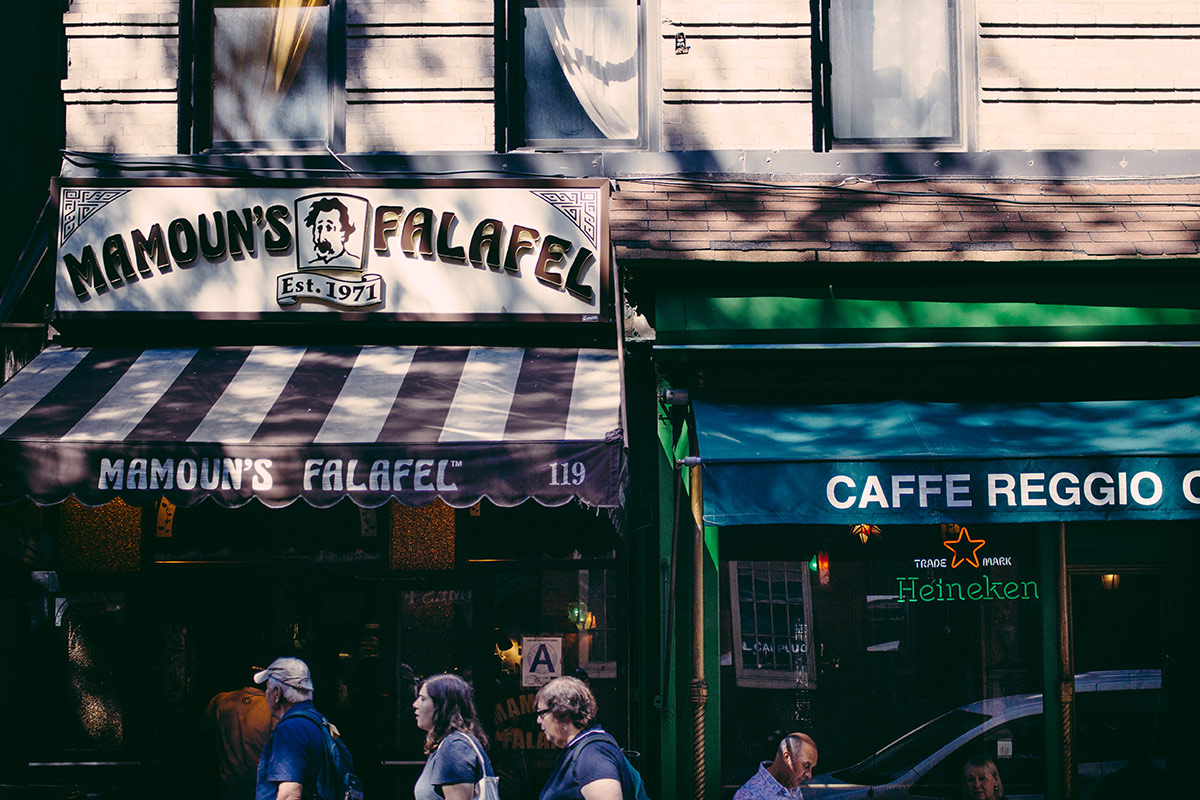 Bob Dylan was a regular at Caffe Reggio. 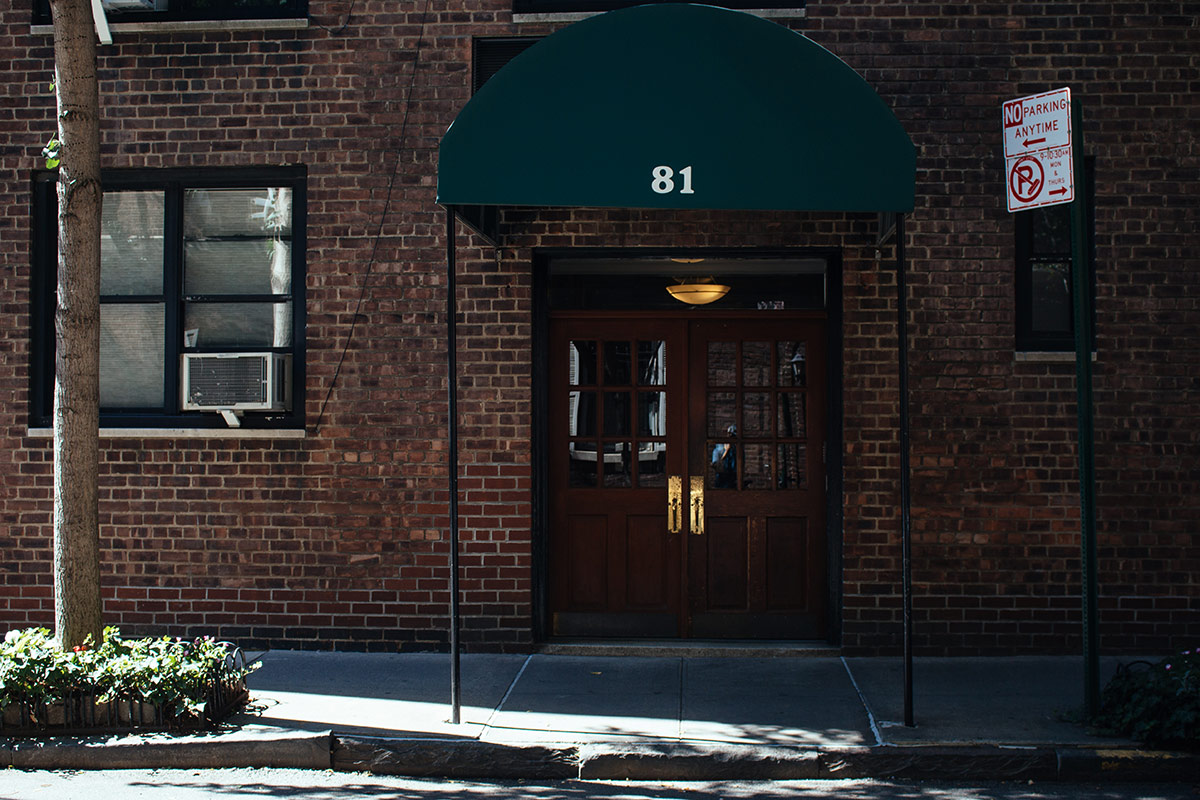 Once the site of a CIA safe house. 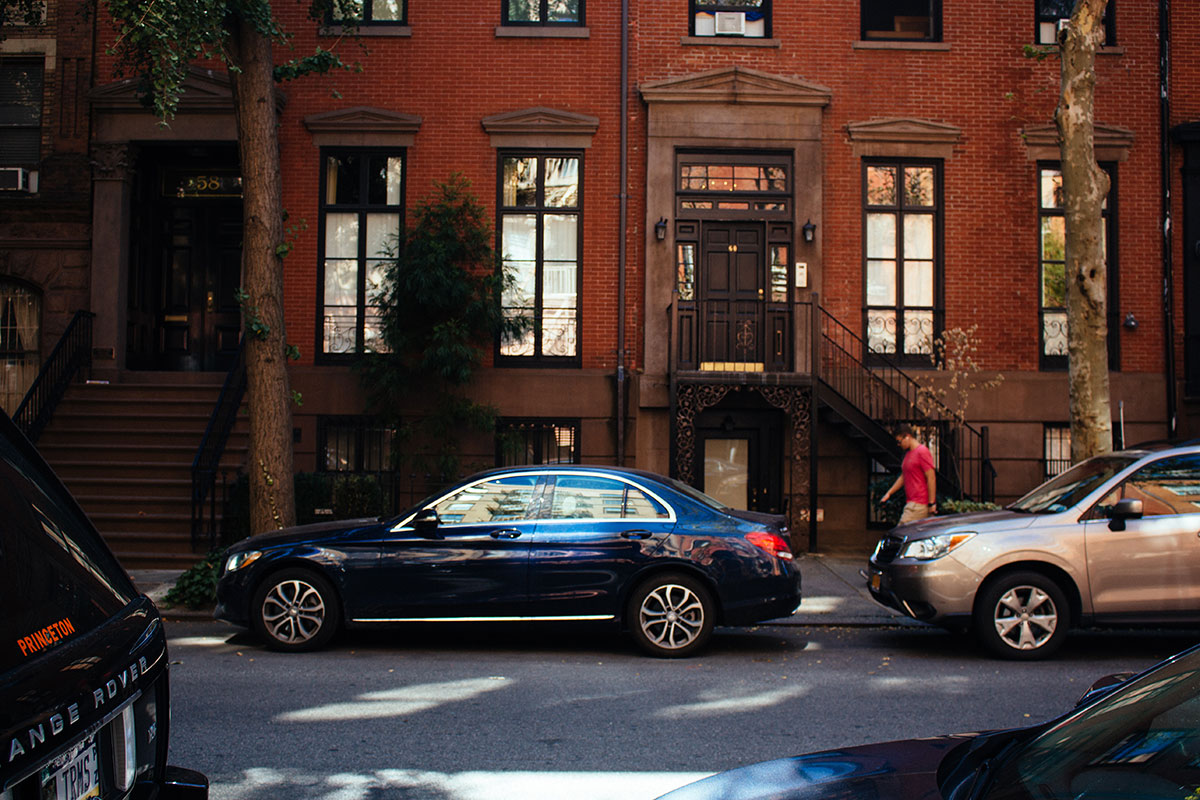 Morton Street. One of the prettiest in the village.

I had a similar experience on Bedford Street, where I often find myself dodging tourists taking photos of the building depicted in Friends. Gallagher gave us plenty of other things to point at: An apartment that was used by the CIA to dose alcoholics with acid in hopes of developing truth serum (81 Bedford); the oldest extant house in Greenwich Village (77 Bedford); Cary Grant's old crash pad (75 Bedford).

The last stop on our tour was Morton Street, a mostly residential block I never payed much attention to — where Eliott Gould used to play stickball while his wife, Barbra Streisand, looked on from their apartment window. Funny how picturing an old street scene can make a neighborhood feel like new.