COLOMBIA – It was impossible to stay seated in the back of the vintage convertible jeep as we peeled off from the small village of Salento. The dank, chlorophyll-scented breeze awakened us like the first sip of morning coffeel we were giddy and wide-eyed as the town transformed into a high-definition terrarium of impossibly luminescent-green hills, pastures, and groves.

The jaw-dropping, seven-mile joyride was a mere introduction to our final destination — a remote, ten-mile loop through Cocora Valley, a tract of lush mountainous cloud forest in Colombia's coffee triangle where the star attraction is a dell of rare 100-foot-tall wax palms, the country's national tree and the tallest and highest altitude palms on Earth.

We pulled into the hamlet of Cocora and found no more than a restaurant and a bed and breakfast by the trailhead, but we raced to take photos of the slender, towering beanstalks already within view. 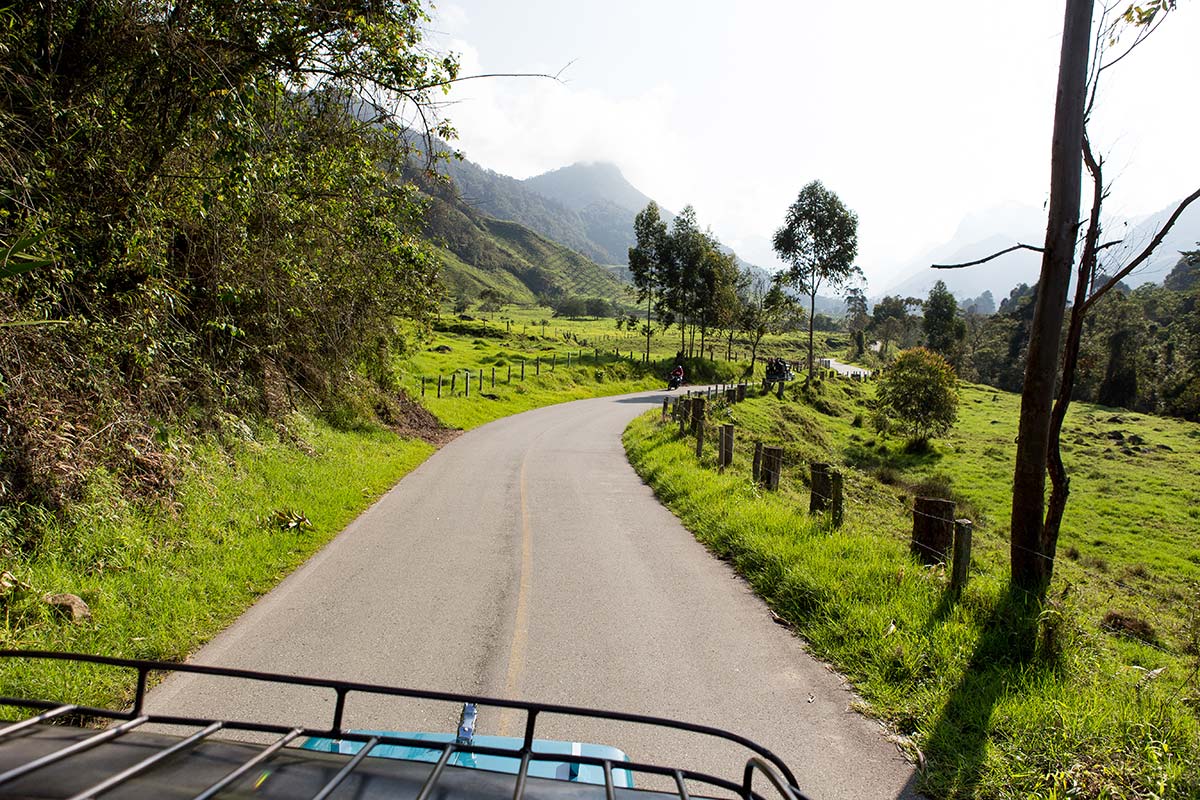 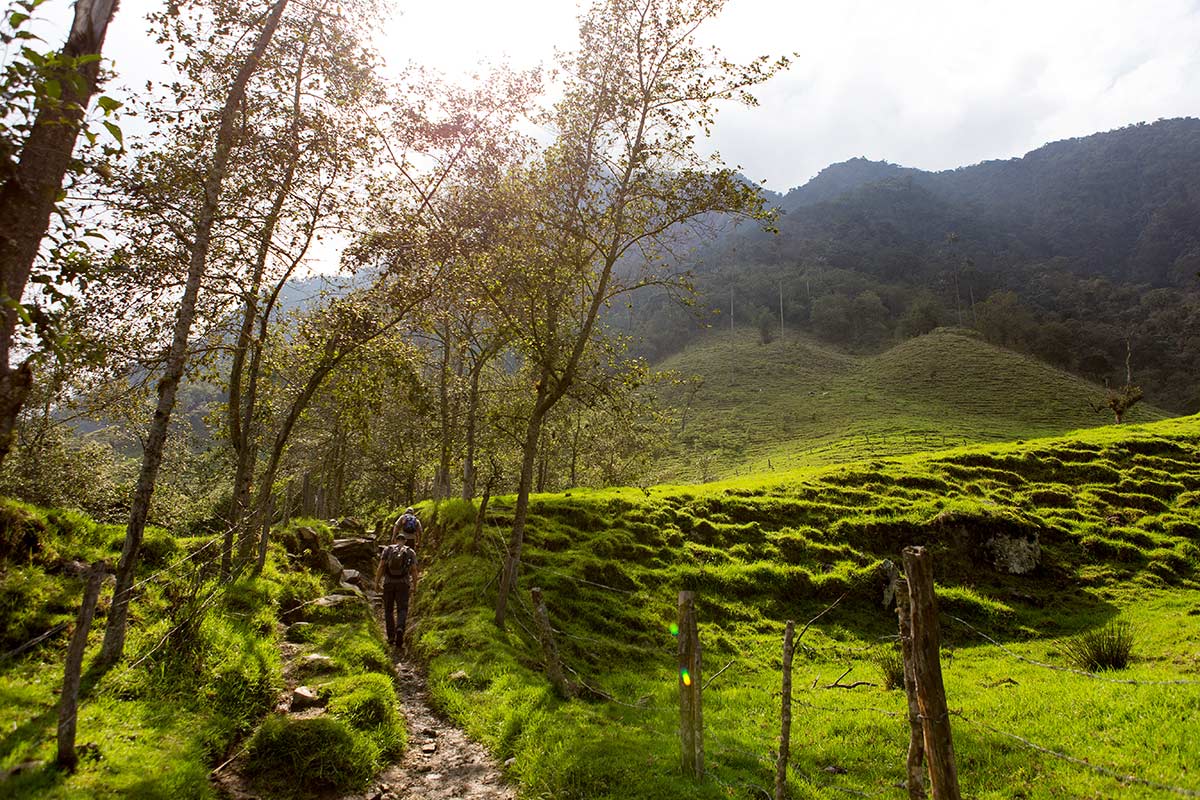 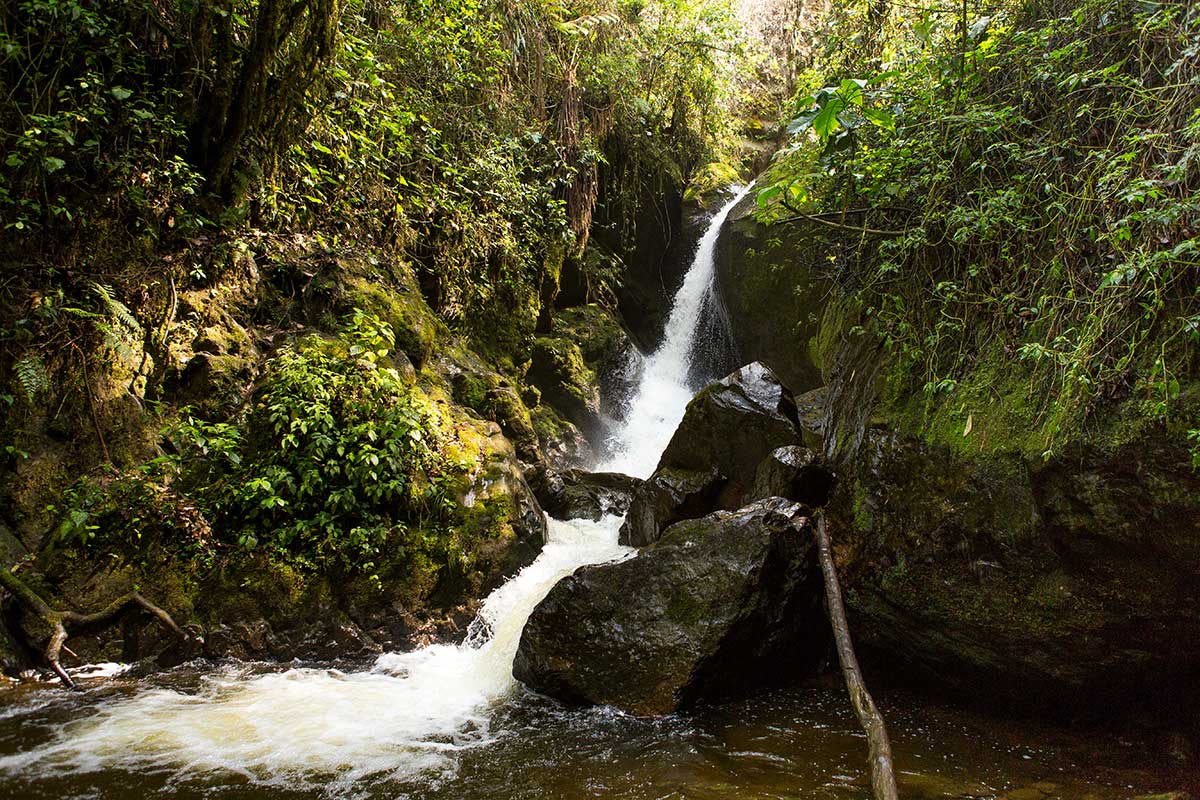 The path started flat and wide, cutting the shimmering valley more like a dirt road than a hiking trail. We learned that the trail is called Independence Road and was made to connect the capitals of South America during the fight for independence from Spain. Local guide Carlos Zafra told us how Simon Bolivar, the mythic Latin America revolutionary, once marched along this soil on his quest to liberate Colombia. Surreal shades of emerald green radiated from every living thing in sight, and the mention of Bolivar's historic passage only imparted the place with more supernatural glow.

"But, you couldn't do this hike ten years ago," Zafra continued on. "It was controlled by the Narcos."

"Narcos" is a word that will inevitably come up in Colombia, now especially with the popularity of the Netflix thriller of the same name, a series about Pablo Escobar and the drug war in the 1980s and '90s. But how do you bring up such a touchy subject?

There is no good answer. Colombia is still healing from the carnage and, because of US involvement, it's a charged and complicated subject for a gringo to ask. The best I could do was muster a question about what Carlos remembered from the time.

"It's a different country these days," he says.

A farmer on a donkey laconically trotted by. On both sides of the trail, cows grazed peacefully in green pastures. On a tall ridge in the distance, a line of wax palms peppered the horizon and looked like something from an '80s surf T-shirt.

Ahead was Morrogacho, a mesmerizing all-green, cloud-kissed mountain that bends at the top, almost like a wizard's hat. After two miles, the path got primitive, curving to the left and tunneling upwards through the shaded, iridescent prism of the jungle.

The expansive views were lost beneath the canopy but were replaced with the aromas of fragrant cedars, gigantic ferns, bromeliads, and lichens that canvased the muddy trail. The road slung past a waterfall before snaking back and forth over a river using six precarious-looking wooden bridges capable of holding only one person at a time.

Eventually, we came to a fork in the road with a hand-painted sign that said "Acaime" — a reference to the Amerindian Panche king whose "spirit still lives in the mountains." According to the placard, travelers are invited "to enter if you want to conserve the life of the forest." Carlos went more in-depth: The Panche are the original inhabitants of the land, and Acaime is the patron saint of the forest, having fought to keep intruders away for most of his life. The name "Cocora" comes from the Panche word for "star of water," which is also the name of Acaime's daughter, whose spirit, locals say, haunts the forest.

The post signaled the start of a short path to Reserva Natural Acaime, a hike-in/hike-out cafe, hostel, and hummingbird sanctuary (entrance cost is 2,000 pesos or 60 cents). There are seven to nine kinds of hummingbirds in Cocora Valley (it depends who you ask), and they swarm at the bird feeders. I bought a handmade keychain and a cup of hot panela (a sweet soup with chunks of salty cheese) from the groundskeeper and tested my Spanish by reading about wildlife on old posters tacked on the wall. It was a great break. For those of us who didn't bring enough food, the less noble snacks, like imitation Oreo cookies, were a lifesaver.

From the Reserva, we retraced our steps to the signpost and took the other fork, a steep but not long 1,000-foot ascent to a small ranch house with no services called La Montana. After resting, we took a leisurely stroll down a wide dirt road along a ridge with panoramic views overlooking the valley. Slowly, the wax palms increased in number. After a few miles, we turned off the main road and walked into a picture-perfect portrait of magical realism — the wax palm forest, a stretch of rolling green pastures checkered with ten-story-tall trees as far as the eye could see.

The first thing we fixated on were the cows, which looked miniature compared to the gigantic trunks they grazed beneath. We hugged the trunks then stood right up against them and looked up.

You could easily be convinced that this spinach-colored fantasy world is, quite possibly, the true home of the Lorax, the Dr. Seuss character who championed nature and spoke for imperiled trees. 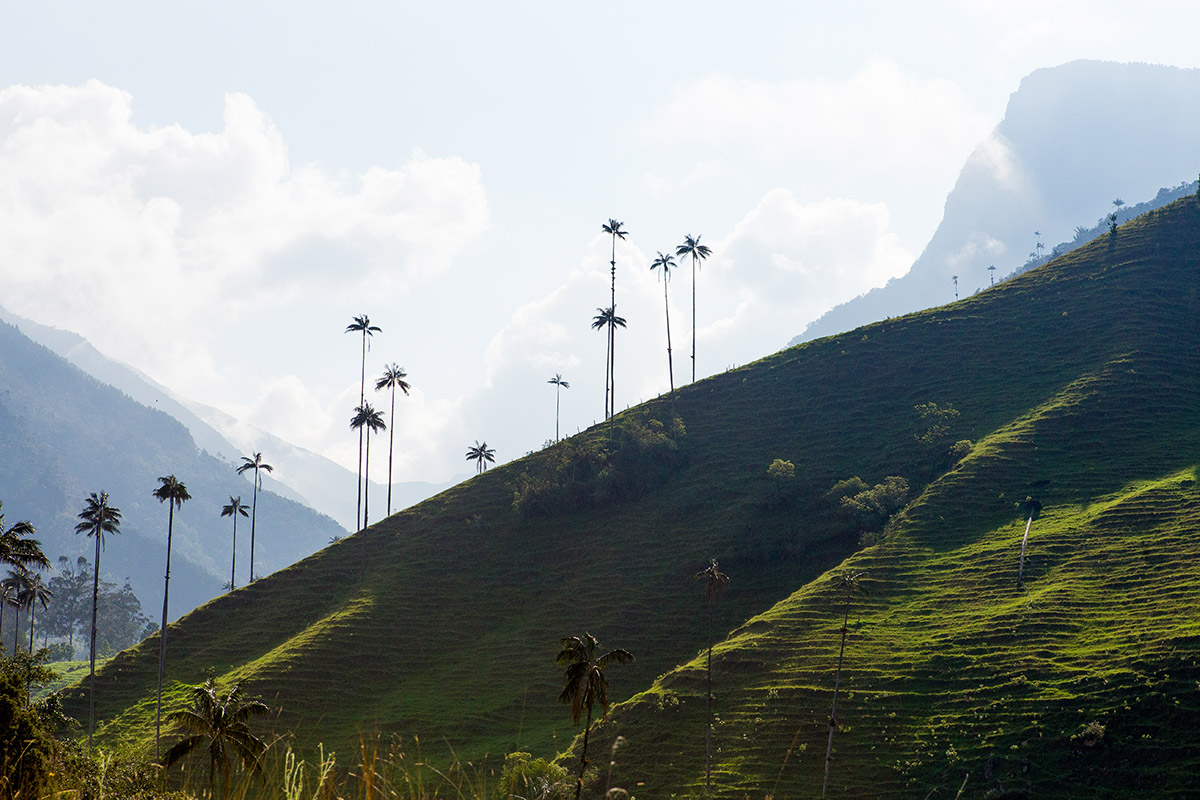 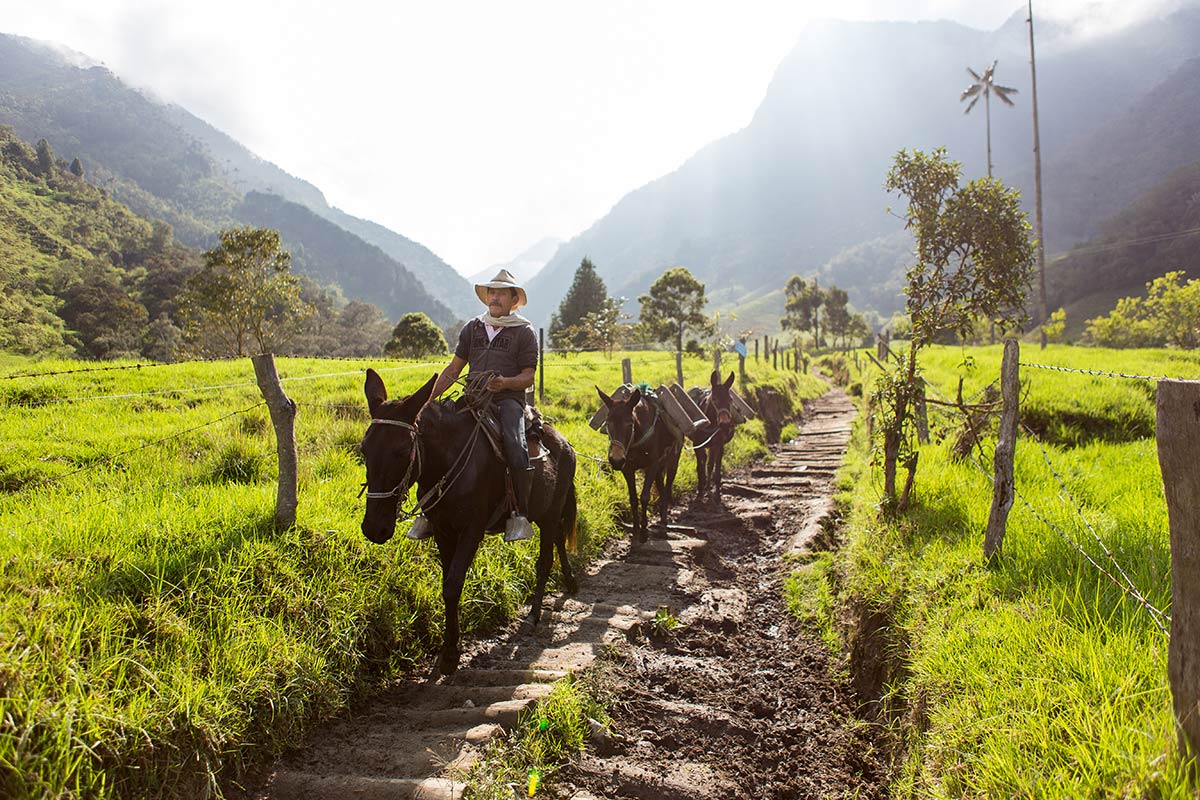 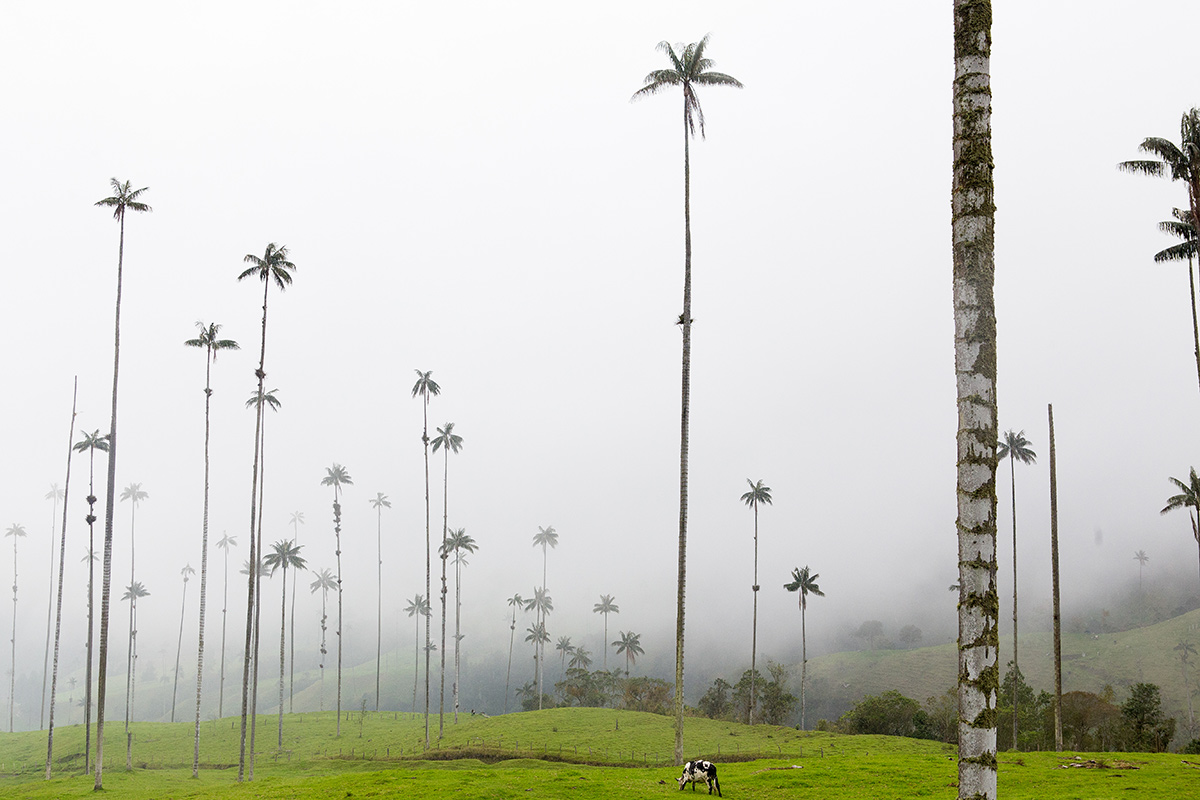 The field of wax palms resembles the unmistakable illustrations from the book, but the message of the Lorax is all around. The reason these trees look so preternaturally spaced in the valley, we learned, is deforestation. These fields were once thick with a tangle of trees, but farmers razed the land for grazing cattle, leaving only the wax palms, which have been illegal to chop down since 1985. The trees, which can live for about 120 years, had been harvested to near extinction for their wax (for candles) and palm leaves (for Palm Sunday celebrations).

Despite everyone's best efforts to preserve these stalks, the trees in this pasture will die out anyway in a few generations — cow manure poisons their water and wax palms are unable to germinate without the help of the jungle. The memory of these green fields will go the way of Bolivar, the Narcos, and indigenous super kings. But for now, it's where you can go to find the spirit of the Seussian Lorax.

The trail continued downslope, along the side of farm and then another mile up a dirt road back to where we began.

Buses leave Armenia bus station every twenty minutes between 6 a.m. and 10 p.m. and from Pereira every two hours on weekends and four times a day during the week.

While Colombia is safer than it has been in the past, these bus routes are known to be targeted by thieves. I heard a few stories from travelers backing this up. Private taxis are available for hire.

We stayed at Hotel Salento Real. It was clean, quiet, and centrally located. From here, I recommend taking a morning or afternoon to roam the hilly cobblestone streets of Salento.

While the trail isn't difficult to navigate, going with an English-speaking guide will bring the walk to life. I traveled with small group tour operator Intrepid who secured transportation, lodging, and our local guide.

It's an all-day hike, so make sure to pack plenty of water and food. Wear good boots, as the trail can be very muddy, especially in wetter months (November to April). Wear layers — you will experience a variety of temperatures.

Picture This: Vacationing in Cartagena
Eating and Drinking My Way Through Cartagena
Kick Back, Get Dirty in Cartagena, Colombia