The Great Wall of China is one of the world's greatest wonders, but it's also one of the world's biggest tourist traps. Traveler and Tokyo expat Kate Bitner shows us how to avoid the crowds and walk the wall like they did 700 years ago.

CHINA – As far as ancient architecture goes, it doesn't get any bigger or better than the Great Wall of China. Some sections of the wall in Beijing see 70,000 visitors per day, but it is also possible to enjoy views of the unbelievable engineering feat without a selfie stick in your face. All you have to do is get wild.

When my husband and I decided to ring in the New Year with a trip to China's capital, our first order of business was figuring out the best place to enjoy a long hike on The Great Wall. After sifting through the interweb, our focus sharpened on Jiankou, a section of the "wild" wall that has not been reconstructed or maintained. Unlike areas such as heavily trafficked Badaling, which was rebuilt for tourism, Jiankou is not open to the public. Getting there requires a little insider knowledge. Websites will warn you that it is the steepest, most dangerous section of the wall, and while the hike was quite challenging, it should be feasible for any moderately active individual. Unless there are small children or seniors traveling in your party, visiting the wild wall should be on your Beijing check list — but don't attempt it without a guide.

We enlisted the help of Adam Hu, a retired professor of Chinese history at Beijing University who's been leading hikes on the wild wall for 40 years. Adam is now 60, but he has the energy of someone half his age. When he arrived at our Beijing hotel wearing casual tennis shoes, slacks, and a messenger bag, I mistakenly thought to myself, "This can't be too hard." He happily answered my husband's endless string of questioning on China's political history during the two-plus hour drive to the wall, rattling off historical dates and statistics as if they were common everyday knowledge. 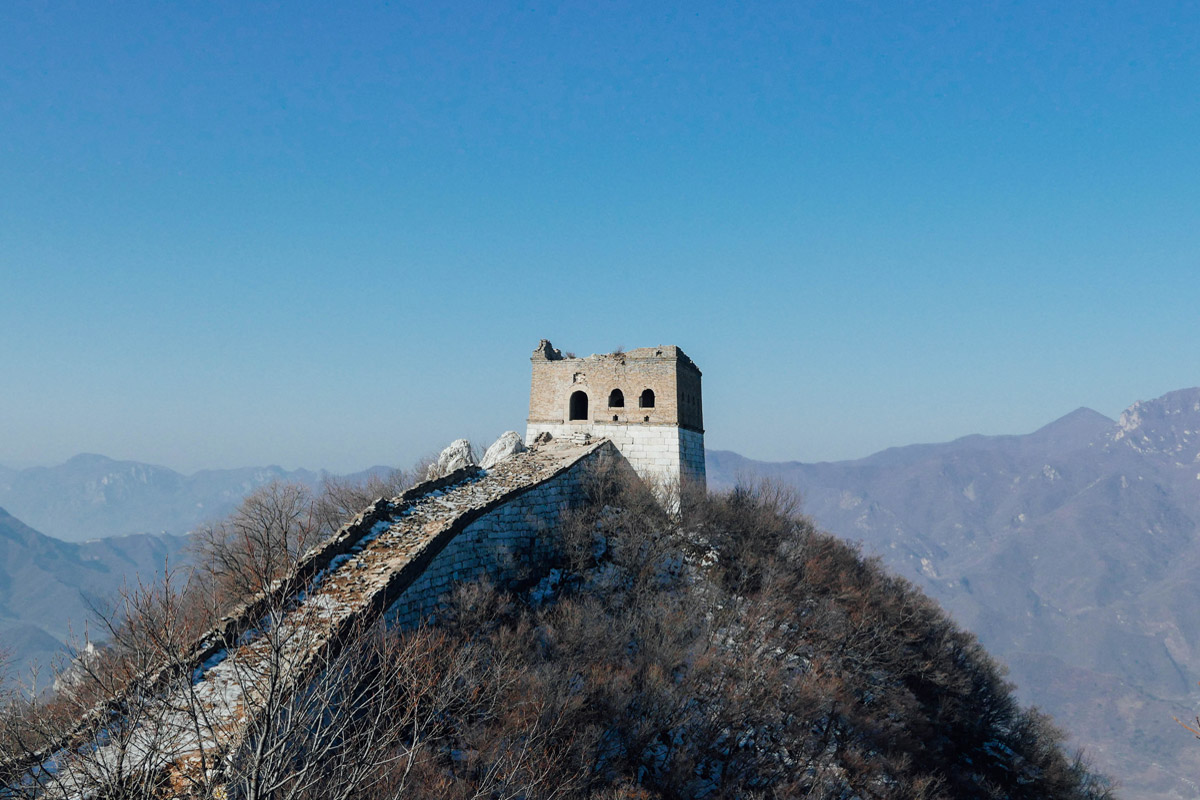 The ruins of an old watch tower on the Great Wall.

As the city drifted further and further into the distance, the landscape outside my window slowly morphed into rural foothills. Eventually we reached a guarded back road, where Adam exited the vehicle for a brief exchange with the gatekeeper in that I can only assume involved negotiating our passage. Shortly thereafter, it was announced that we had arrived. Our driver dropped us off on the side of a road. There was no wall in sight. The ancient stone fortification sat above us, an hour's hike away on a steep incline. We could finally see the sun, as the mountains trapped the heavy smog wafting in from Beijing. The last remnants of a snow storm clung to the earth in sparse shady patches, and we started weaving our way through the forest to The Great Wall.

Upon our approach, my heart started racing as I realized that there were no stairs. No ladder. No rope. Adam, always ten steps ahead of us, was hurriedly stacking a pile of loose stones against the wall to create a makeshift platform. Despite the obvious fact that there was no alternative, he asked if I'd be able to climb it. Just as I was beginning to question what I'd gotten us into, we noticed a man shooting photos in the watch tower above us. Adam scaled the wall like it was something he could do in his sleep, and the two men joined forces, each grabbing one of my arms and pulling me into the tower.

That first view took my breath away. The craggy rock wall stretched as far as the eye could see, zig-zagging over impossibly jagged mountain peaks in a way that simply defied comprehension. Decaying watch towers stood defiantly on the ridge lines, overgrown with vegetation. It was spectacularly beautiful. I couldn't wrap my head around the fact that we were seeing just a tiny glimpse of a structure that spans over 13,000 miles. 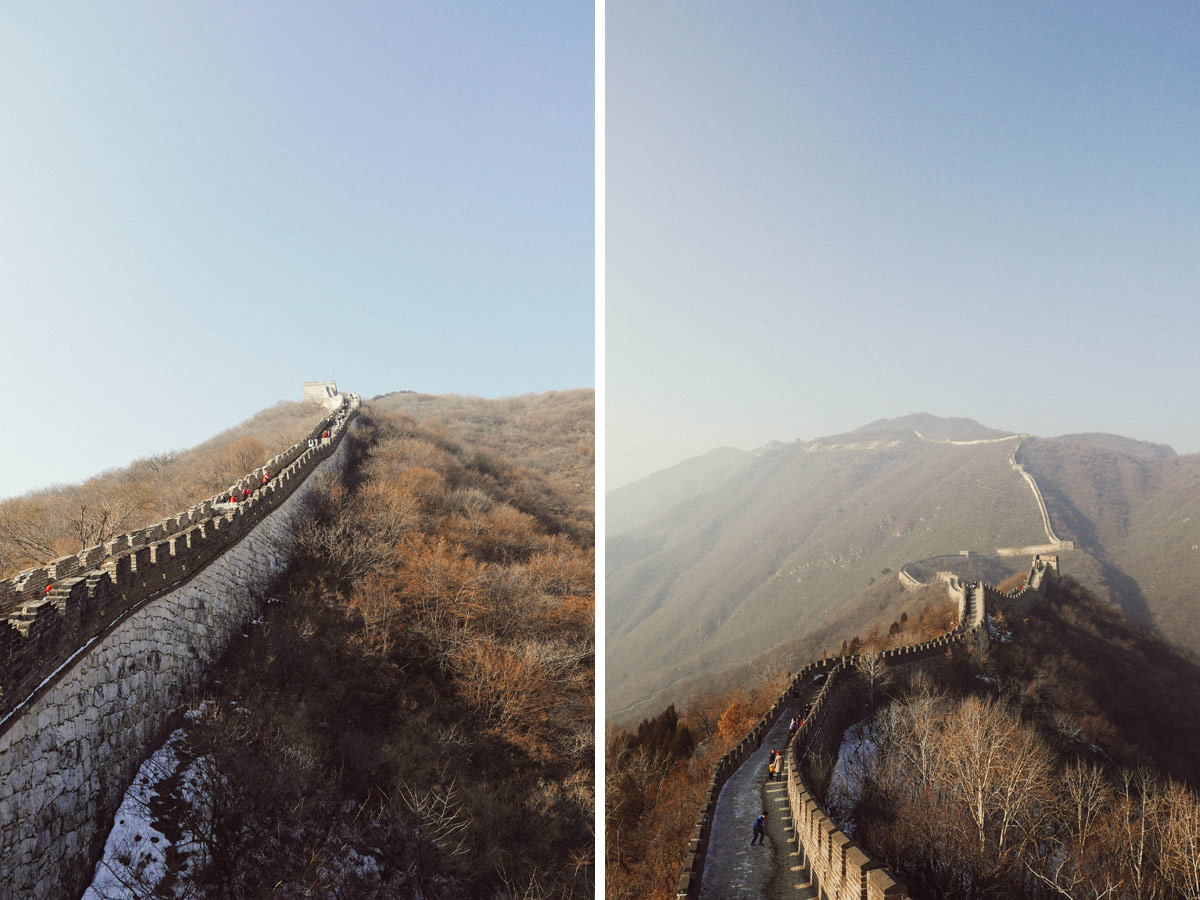 A glimpse of the wall that extends into both horizons for thousands of miles.

The Jiankou section of the wall is completely wild and untouched, retaining the original appearance of its 14th-century construction. This does make it arduous to climb, with unstable rocks and and tricky footing, and in the icy conditions that day we were often hanging on to tree branches for support (trees are literally growing through the wall). At one point, Adam suggested that we take a detour to bypass a particularly steep section where "many tourists have fallen." We decided to take his word for it.

Even though we chose to climb the wall on a national holiday — New Years Day — we encountered just a handful of tourists in Jiankou. It almost felt as if the wall was ours for the day. From Jiankou, we headed east to Mutianyu, a section of the wall that was fully restored to its original glory in the 1980s. The trek between these two sections is about six miles and takes roughly four hours to complete. It was fascinating to see the striking contrast between crumbling Jiankou and polished Mutianyu, where you can ascend the wall by gondola and descend by toboggan slide — no climbing required.

At the end of our hike, Adam took us to a nearby Chinese restaurant to refuel with a well-earned meal. It was a nondescript place, with no need for flashy signage to attract tourists. When it became obvious that my husband and I were overwhelmed by the menu offerings, Adam again came to our rescue. "I know what you'll like," he assured us before ordering for the table. And indeed he did. Bowls of rice and steaming platters of spicy stir-fried chicken and battered pork were devoured upon arrival. I wrapped my fingers around a warm mug of jasmine tea, basking in the surreality of our day.

The sun was just beginning to set on our drive back into Beijing, closing out what had easily become the most memorable New Year celebration of my life. I didn't even miss the champagne. 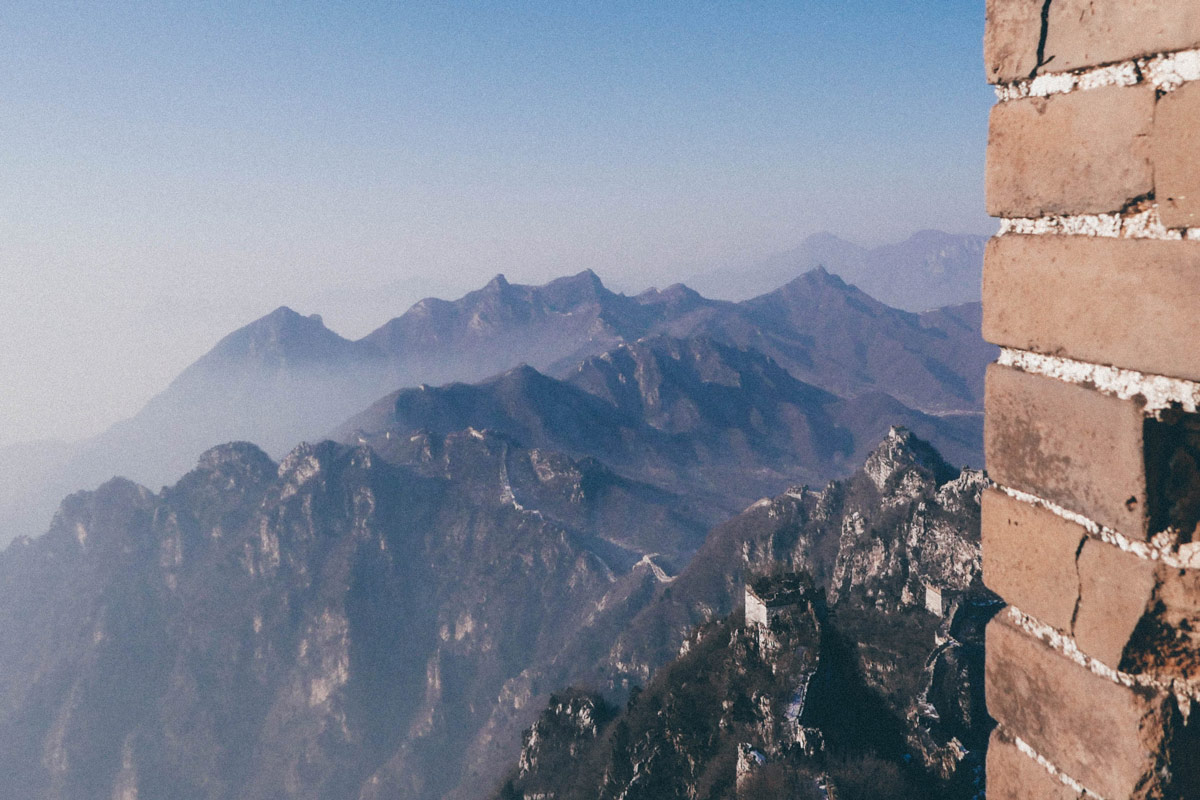 Being surrounded by jagged mountain peaks make you feel like you're on top of the world.

Our tour package was organized by The Orchid and included transportation to the wall and back, our trusty guide Adam, a private driver, entrance fees and a delicious Chinese dinner for RMB ¥900 (USD $135) per person. Alternatively, you can contact Adam directly to book a tour by e-mailing him at huyantianru@163.com.

Expect to dedicate an entire day to the tour — eight to nine hours in total — and be sure to eat a very big breakfast beforehand.

Broken and Bungled in Beijing
I'll Have the Donkey Sandwich, Please!
Finding Calm in the Chaos of Hong Kong