When you want the inside scoop, you have to go direct to the source. The contributors to Eat Drink Lucky, a lifestyle and culture newsletter for cities around the U.S.A., spend their days eating, drinking, and, well, pushing their luck to find the next best thing happening around town. Austin-based editor Rachel Forrest shares the very places where she likes to run and hide during Austin's SXSW. Will she see you there?

AUSTIN – A first experience of Austin for many often coincides with the nine crazy days of South by Southwest. What began 30 years ago as a music festival with some 100 artists at fifteen venues has become a marketing behemoth with more than two thousand artists in 107 venues and hundreds of panels and workshops in music, film, and technology drawing talent from all over the world. A newer addition, SouthBites, is a celeb-studded celebration of food and drink.

To say Southby takes over the entire city is an understatement: Locals, and even visitors, need to take a breather or just plain avoid the madness. Fortunately, there are plenty of hideaways with that unique Austin vibe.

Know Where the Action Is (So You Can Avoid It)

Most of the SXSW action is in the heart of downtown but spreads into East Austin and across the mighty Colorado as well, with artist showcases popping up in just about every open space and bar all over the city. Thanks to the many transportation options — Lyft, Uber, taxis, shuttles, a late night bus system, and even rentable bikes from kiosks — exploring a few of Austin's many unique neighborhoods surrounding the downtown area, each with its own bars, restaurants, and usually a food truck park, is easy even without a car. Just about every neighborhood has a green space for walking and biking, a juice bar, a coffee shop, and, yes, a tattoo shop, because you're going to want a souvenir to show off to your pals back home.

You'll find all of Austin's specialties, including BBQ, breakfast tacos, and creative food trucks, in less traveled spots. Bars don't have to serve food, so craft cocktail bars and urban breweries with a must-try food truck right outside are a great way to sample the cuisine of a world-renowned chef and the talent of a similarly touted bartender or brewer. 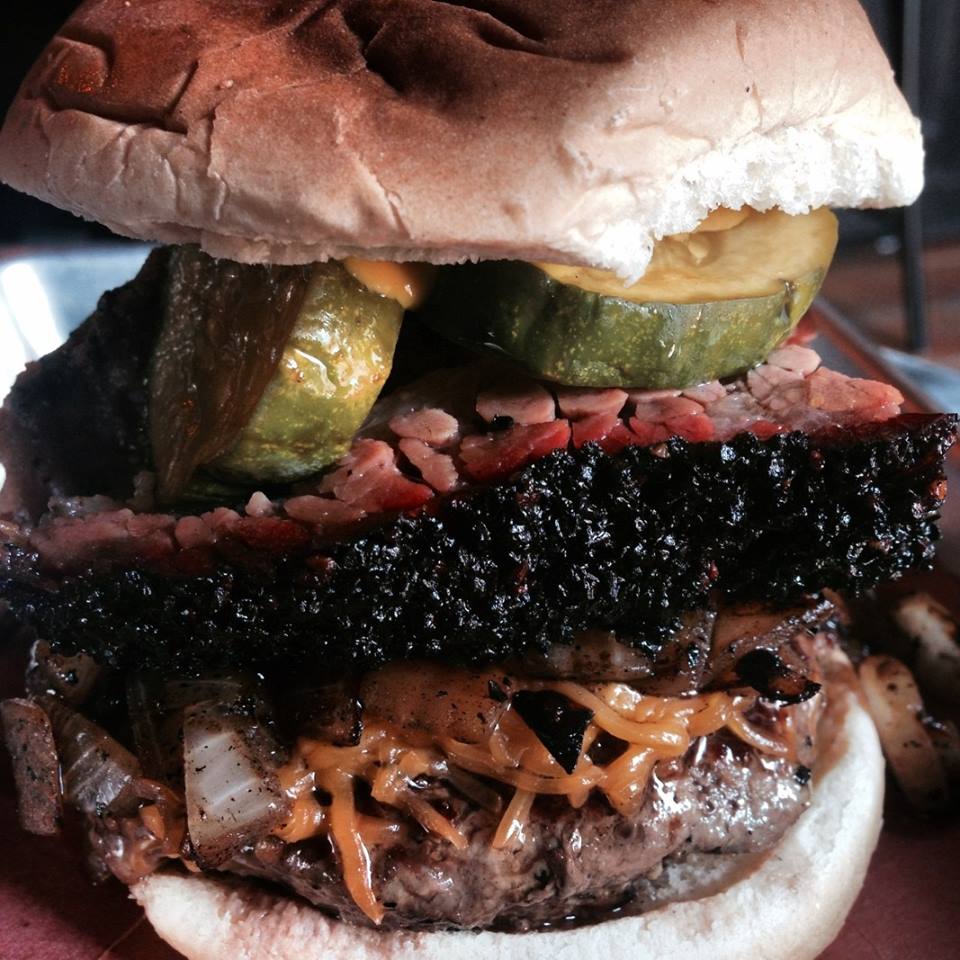 The Meat of the Matter

While you might be tempted to stand in line at world-famous Franklin Barbecue for the chance to dive into a big plate of James Beard Award-winning Aaron Franklin's brisket, it's a commitment you might not have time or patience for on this trip. The same goes for many other spots deemed "line-worthy." Fear not, there are insider alternatives:

La Barbeque is in a section of town that in two years or so might be just as busy as Rainey Street, but for now, it's still one of those “in the know” areas. In walking distance are Stay Gold, where you can sip Manhattans outside in a storage container, and Drinks Lounge, which has a punk rock vibe. You'll find Micklethwait Craft Meats across I-35 eastward in a quiet little food truck park. If you're there on a Saturday, try the pulled goat. 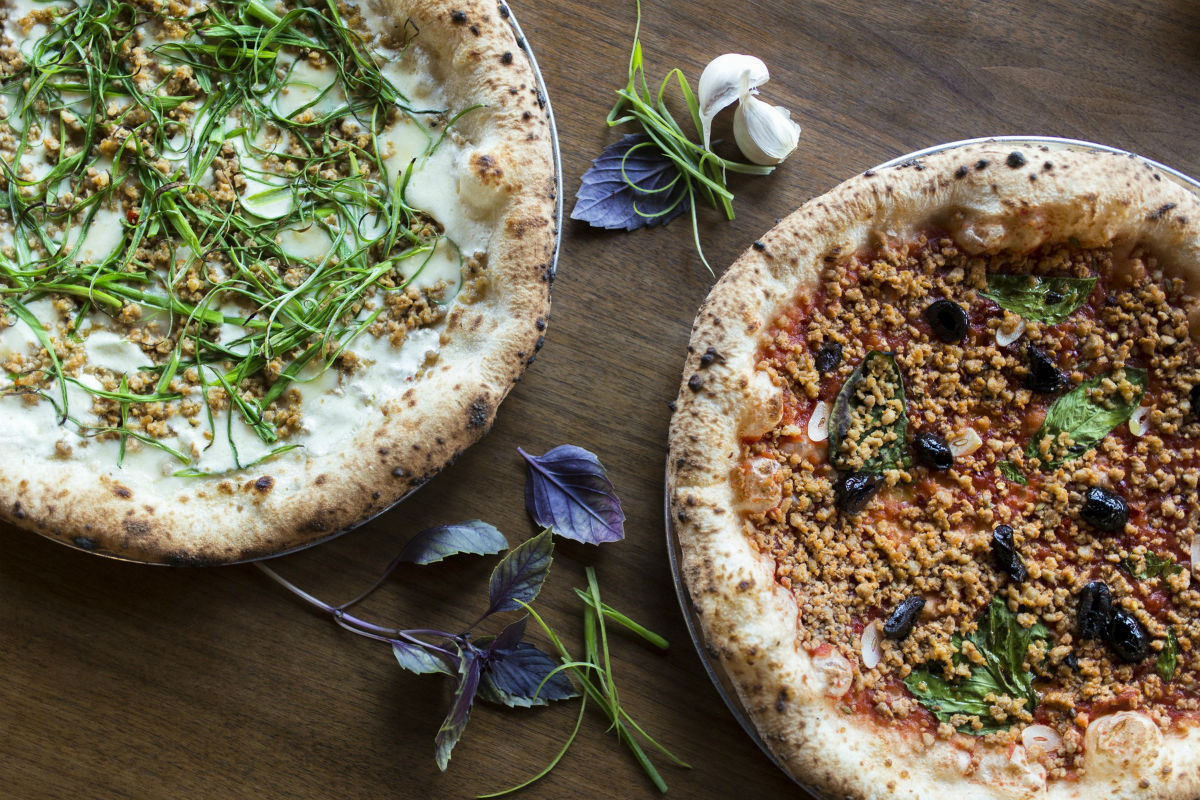 A Slice Is Nice

It's like the Italian food fairy came to Austin and sprinkled a magic dusting of Parmesan all over the city. You could wait in front of the original Bufalina on Cesar Chavez, but with Bufalina Due open in North Austin, diving into their Fresca pie with prosciutto piccante, arugula, meyer lemon and house-made mozzarella is the SXSW alternative. Combine it with Barley Swine next door, and make it a mini-progressive dinner. Unit-D on Manor Road is another Neapolitan pizza joint worth the short trip.

Austin has more than one Chinatown, and Asian supermarkets and pho houses and noodle shops are strewn throughout the city. The original Ramen Tatsu-Ya has a line so steady there's a water station and ropes to organize the hoards, but there's a second spot in North Austin that serves their Tonkotsu Original, an umami bomb with pork bone broth and pork belly. Also great is Xian for hand-pulled noodles. Go to their Mueller location, so you can walk through the green space nearby after dinner. 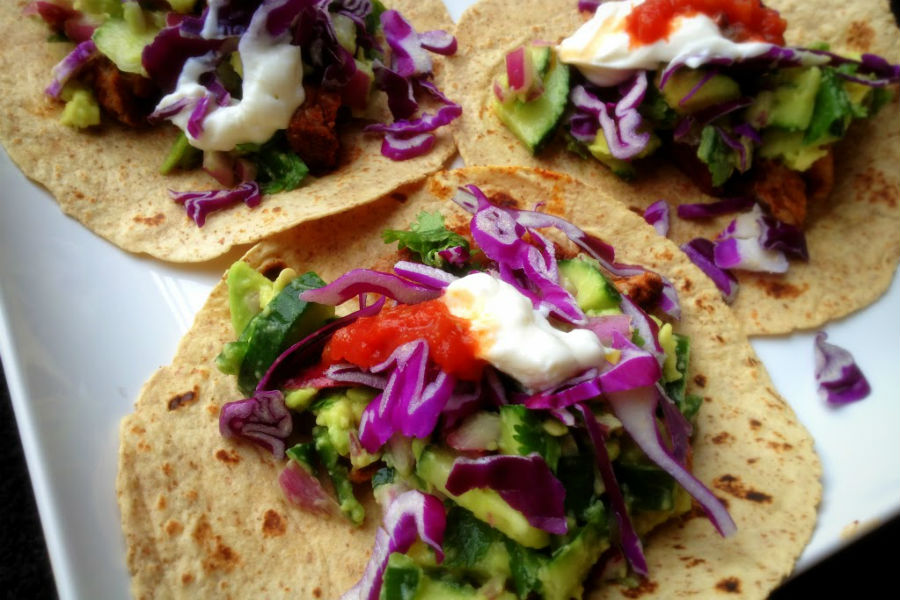 Get Down With a Daily Taco

Breakfast tacos and a plate of migas made with leftover tortillas and a cheesy salsa sauce are staples of the Austin morning diet, but tacos are an all-day, all-night kind of thing, too. Seek out La Feria on South Lamar for all of that and an excellent margarita, or go north to Tyson's Tacos, where they'll give you a free taco if you play their ukulele, no talent required.Tamale House East is also a good bet, and while it's in the heart of some of the more popular music venues and SXSW action, their calm, enclosed garden patio is the perfect hideaway. 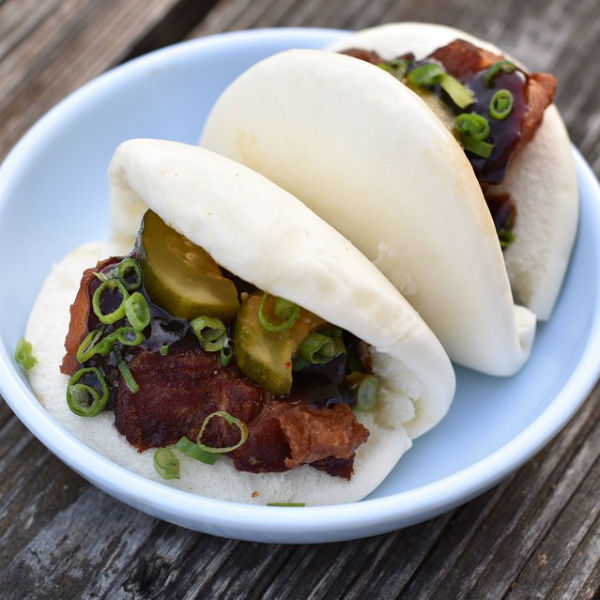 Food Trucks and the Bars Where You'll Find Them

Austin has food truck lots all over town, and many are parked at dive bars. The combo gets you two ATX experiences in one. Several of Austin's best brick and mortar restaurants got their start as food trucks, like Paul Qui's Thai-Kun outside Whisler's rustic craft cocktail bar (downstairs) and cozy Mezcalería Tobalá (upstairs). You can enjoy the ESK Thai-Kun experience within four walls at Rock Rose at the Domain, too.

While locals still call The Aristocrat Lounge by its former incarnation — The Poodle Dog — it has its own Austin dive character. Which is to say it's dark and filled with regulars (and Skeeball), but offers craft cocktails and a great selection of mezcal. They have a special cocktail menu to go with the food from Three Little Pigs outside, where the menu of hearty Southern fare changes daily.

Set at the far end of the E. 6th and E. 7th corridor, an area suddenly populated by big condos among the diehard bars like Yellow Jacket Social Club and The White Horse, Hard Luck Lounge is an enclosed beer garden and bar with its own little compound away from it all.

Three blocks of Manor Road are dense with bars and restaurants, so spending the evening there will be a mini-getaway. Hidden behind a big wooden wall, Butterfly Bar is attached to a little theater called The Vortex. Patrizi's truck parked outside has an awning and seating where you can chill over cacio e pepe pasta with a coddled egg. 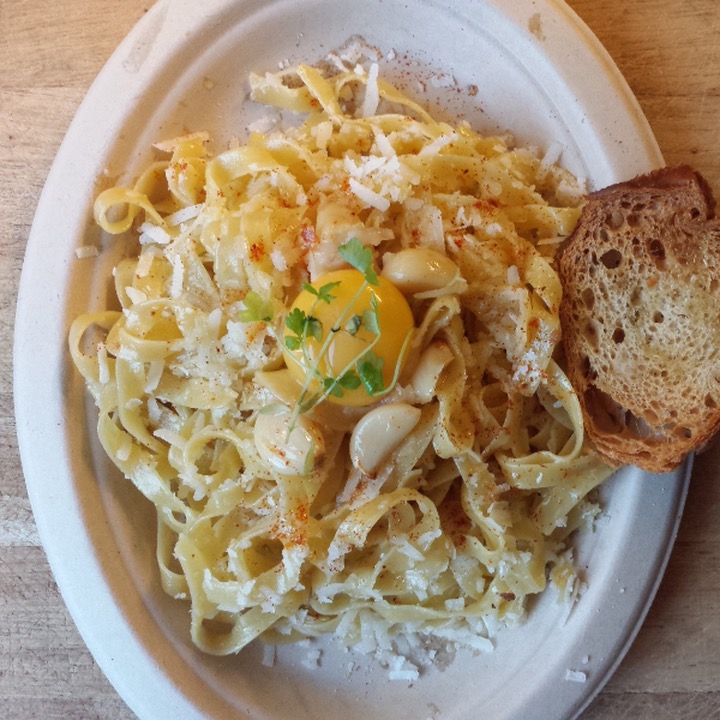 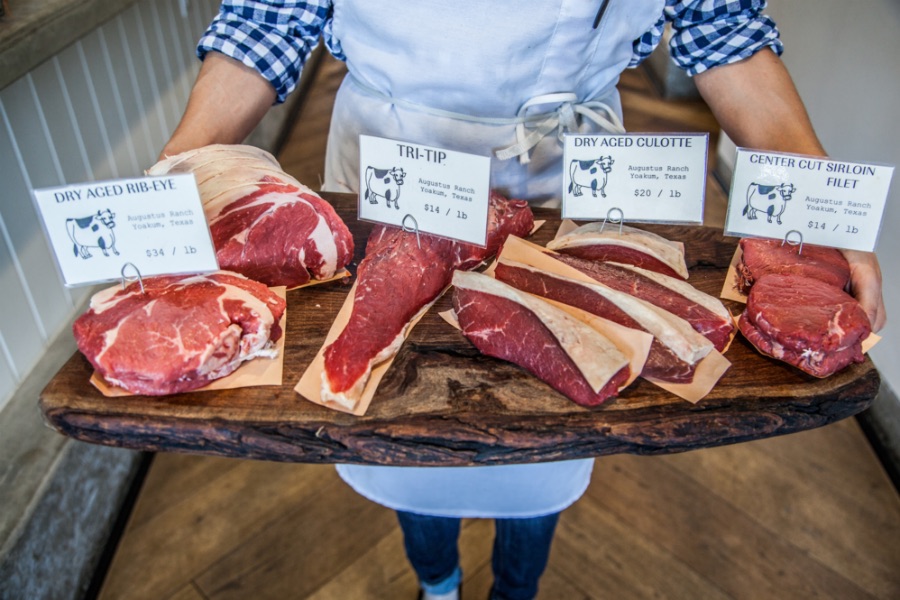 Not quite a sausage fest at Dai Due. Photo courtesy of Dai Due.

While many of the more formal dining spots, like La Condesa and Lonesome Dove, are in the heart of downtown, there are exciting little restaurants secreted away all over the city. Blocks away from the eastside showcases is Justine's, a French-influenced bar and restaurant with a huge garden for cocktails, escargot, and steak frites. It's also home to the Lumiere Tintype photography trailer, where you can commission and receive an old-timey self-portrait in under an hour.

While Austin is certainly not like the rest of Texas, it's still Texas. We have steak. Big and spendy steakhouses rule downtown, but if you want something more unusual in the way of juicy meat, Dai Due on the Manor Road strip has an in-house butcher. Watch racks of elk swing behind the line and in front of the three adjustable wood-fired grills on their way to becoming your steak or sausage. Chef Jesse Griffiths' ingredients are all sourced nearby.

Go to Sawyer and Co. as much for the midcentury modern decor as the Cajun cuisine and Hurricanes. (Locals will tell you it's where Arkie's used to be.) The outdoor patio is carpeted with astroturf, but you should sit at the counter for crawfish etouffee or breakfast "all the time." 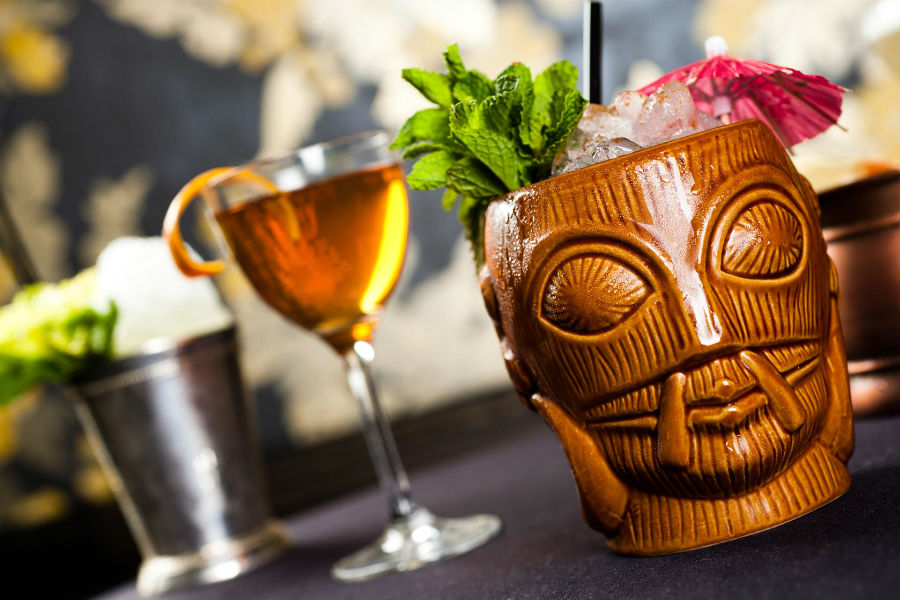 There are a few very fine craft cocktail bars that are actually hidden. Midnight Cowboy, a speakeasy on "Dirty 6th" has a non-descript door and a buzzer to get you in for tableside cocktailing in little booths where, until a few years ago massages were dispensed. Reservations are a must. New Small Victory is also hard to find, with its miniscule sign and second-floor location. At Firehouse Hostel across the street from The Driskill, if you open the library wall, you'll find a hidden lounge and music venue. 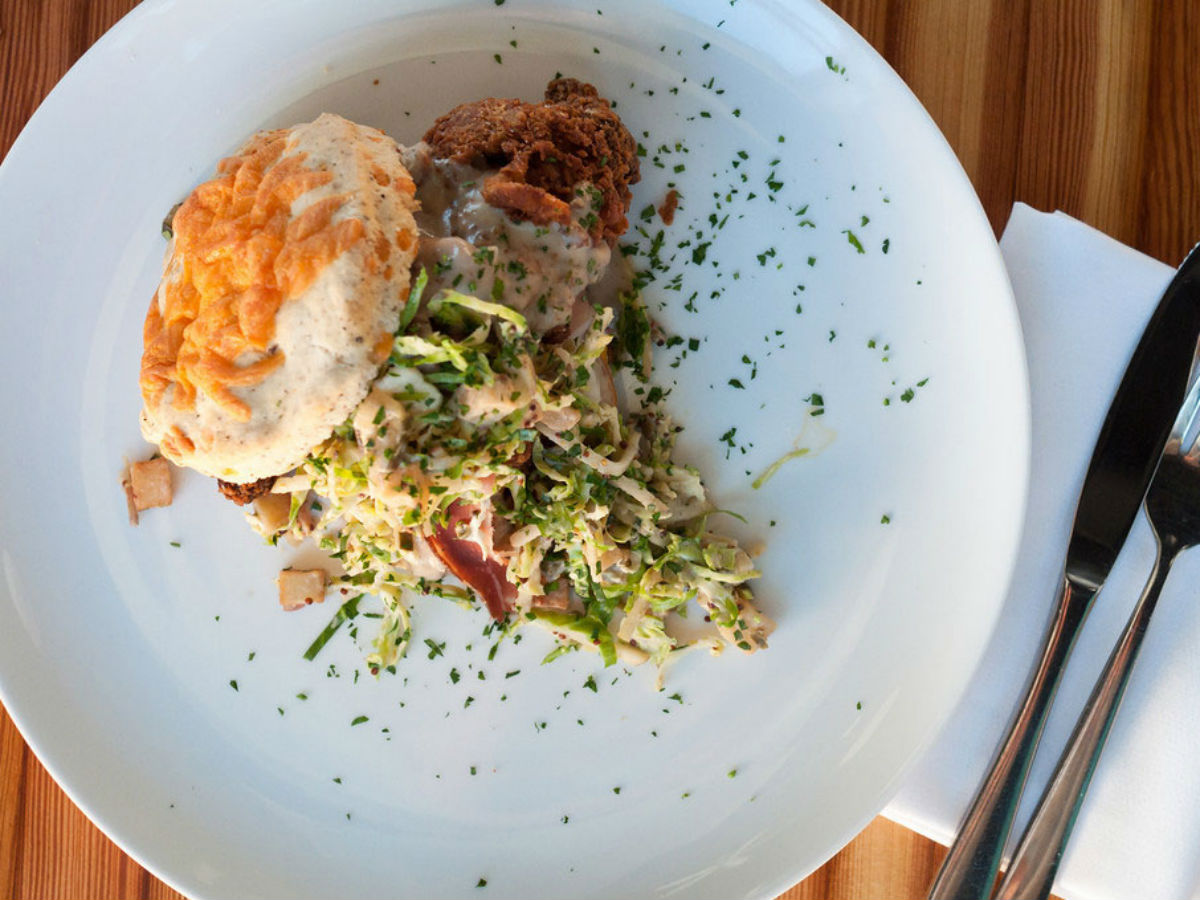 A trendy take on chicken and a biscuit. Photo courtesy of Foreign and Domestic.

By the looks of the sudden condo development in the area at 12th Street and Chicon, this enclave a short distance from downtown is sure to get even more interesting. King Bee is a favorite dive bar with one of the best mezcal selections in town, creative pizza, and a terrific neighborhood vibe. The mirrored doors are a tip-off to cocktail bar Dozen Street.

North Loop is a neighborhood with cool vintage shops, a revolution-themed bookstore, and great character. Before dinner at Foreign and Domestic, whet the appetite at The Tigress cocktail bar. Have a tiki nightcap and the special Twinkie dessert at Drink.Well.

Just off E 7th Street is a mini-strip home to The Lost Well. Owned and bartended by talent from the old Lovejoy's, it's a beloved downtown punk rock dive bar brought back to life. And for terrific sandwich and brew, Gourmands is right next door. 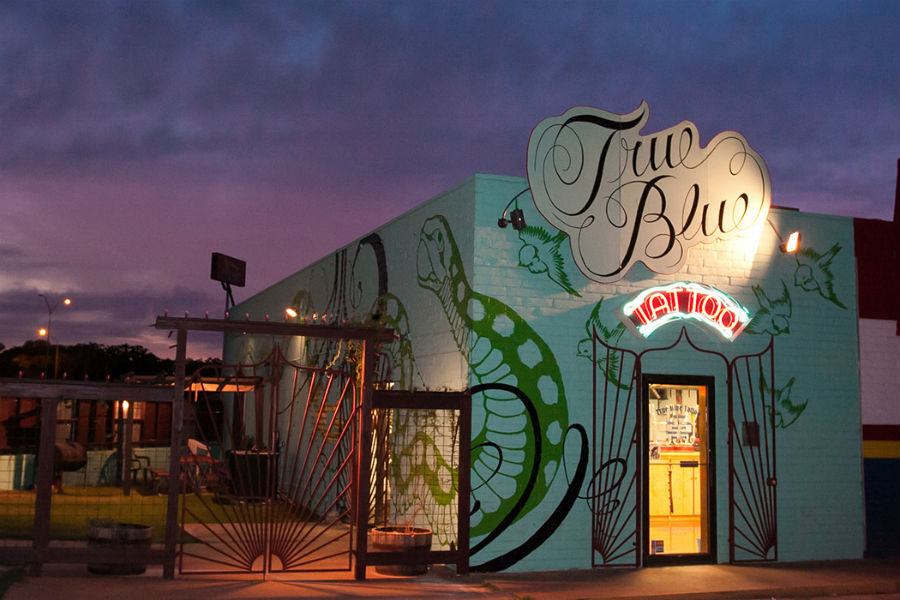 Where you can get a tattoo of the town's mantra: Keep Austin Weird. Photo courtesy of True Blue Tattoo.

Make It Permanent: Tat Up

Like fancy coffee shops, there's a tattoo shop in every neighborhood, including award-winning True Blue Tattoo on Red River. For a more relaxed experience, go to their second location on Airport Blvd. There's a patio outside where you can relax while you summon your nerve. Triple Crown, just a short ride from much of the SXSW frenzy, is another top-notch and relaxed option with tattooers who travel the world.

For your daily dose of food, drink, and lifestyle news in your city or in one of ten cities you'd like to explore, sign up for Eat Drink Lucky.

Austin's East Side King
Austin: The Good, the Badass, the Divey
The Ultimate Texas Barbecue Blitz