On a recent trip to Rome, Fathom founder Pavia Rosati spent a few days at the newly opened G-Rough. Within five minutes, it had instantly shot to the top of her list of favorite hotels in the world.

Rome is the city of reinvention, a town where nothing lasts forever, yet everything is eternal. That juxtaposition of transience and permanance is manifested beautifully at G-Rough, a new hotel a block away from Pizza Navona where I spent a few perfect days in May. The second project by Emanuele Garosci and Gabriele Salini, the hoteliers behind chic Palazzina G in Venice, G-Rough is as much a living art project as it is a collection of self-billed "unconventional luxury suites."

The art's the thing here, with suites and apartments named for the giants in Italian art and design: Ico Parisi, Giò Ponti, Silvio Cavatorta, Venini, and Seguso among them. Before they converted the former 17th-century residential palazzo into a hotel, the owners invited friends to a demolition party-cum-art installation. The walls were stripped of decades and centuries of paint and paper until nothing remained but the dramatic rough stucco finish, which they left behind. (One nod to the "rough" in the name.) Artists painted large and smalls works throughout the hotel, most prominently in the main staircase. The fixtures, the chandeliers, the textiles, the paintings, the little messages painted on the walls ("trouver son bonheur"): There's something interesting everywhere you look, and the eclectic styles converge beautifully. 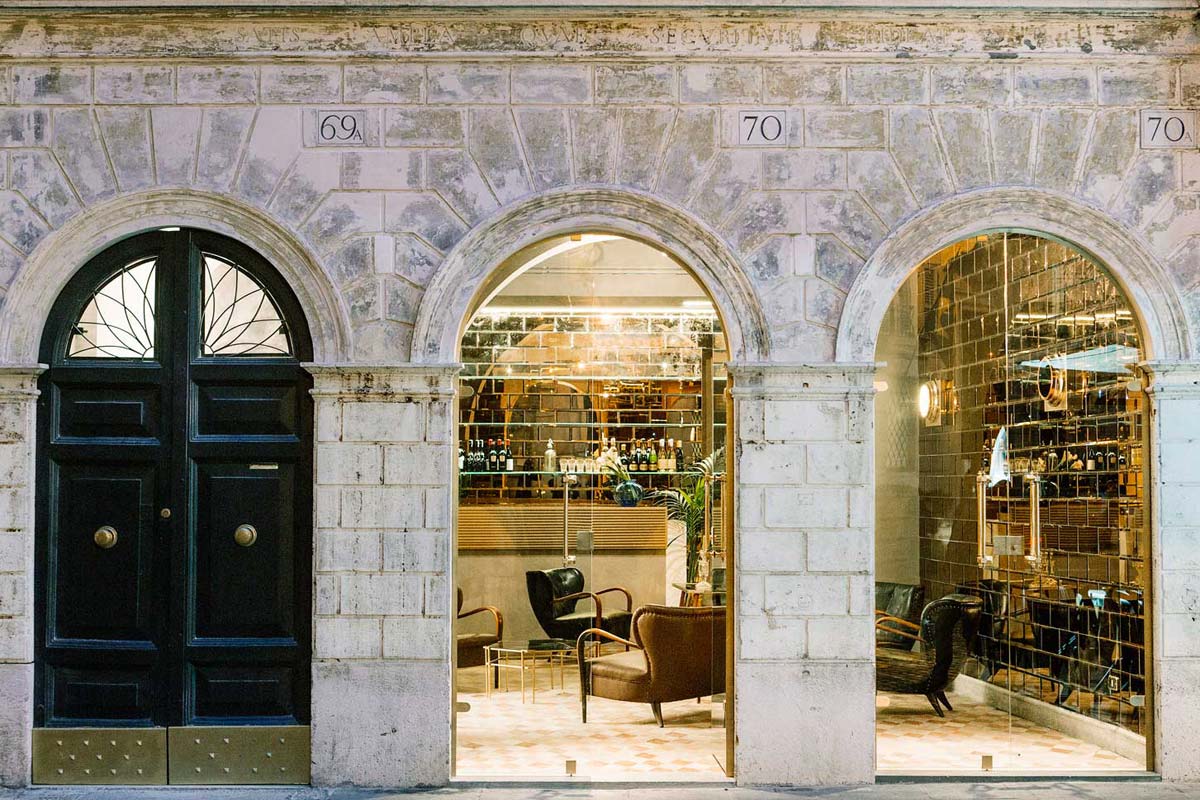 The entrance from Piazza di Pasquino. Photo courtesy of G-Rough.

You enter the unmarked hotel in tiny Piazza di Pasquino in Centro Storico through what looks like a cool Roman bar, which is what it is, all mirrored tiles and sleek mid-century furniture. "Reception," as it were, is conducted at the same bar where coffees and drinks are served. The staff is thoughtful and accommodating, whether you need an Aperol spritz or advice on the reliability of Roman Uber.

There are ten suites and apartments at G-Rough, and all have similar design touches: Italian furniture from the 1930s-'50s, chandeliers of Venetian glass, and big bathtubs, often in the center of a room. The WiFi is great throughout the hotel, which made working easy, as did the oversized custom sofa in my living room, which ranks as the dreamiest office I've ever had on the road.

G-Rough pretty much became the center of my social life in Rome. When friends stopped by the hotel to pick me up before going out, the conversation about our plans always got sidetracked with "...or we could just stay here because your hotel is amazing..." 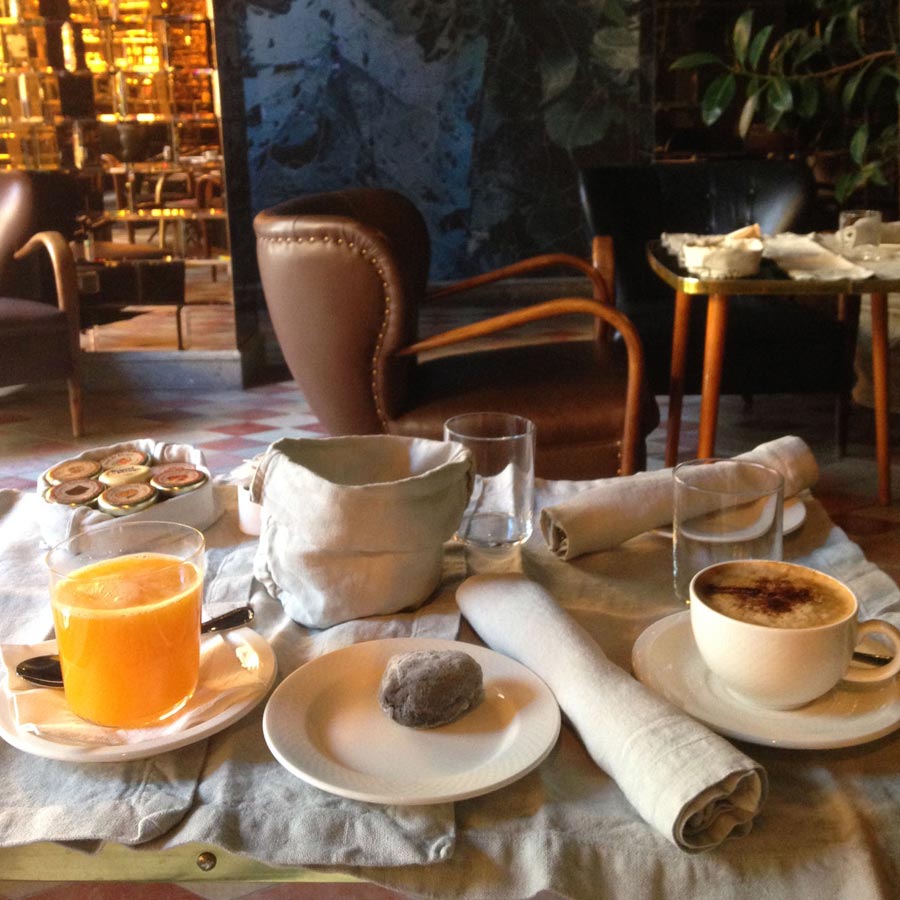 Breakfast at G-Rough. All photos by Pavia Rosati unless credited to the hotel.

Breakfast is served on the ground floor in the space that serves as bar, lobby, and reception. My spread, laid at low tables atop rough linen, consisted of freshly squeezed orange juice, cappuccino, a jar of yogurt, black carbon bread, and numerous small jars of confiture. I asked, but didn't really understand, what made the bread "carbon," nor did I really care, as long as they kept bringing me extra servings.

Other than snacks and drinks at the bar, there's no real food service at the hotel, though you can call for 24-hour room service. That said, you're within quick walking distance of so many restaurants that it makes no sense to stay in to eat. And you could always prepare something in your in-room mini kitchen.

For the most part, there are two rooms per floor. I stayed in Osvaldo, the Pasquino-facing suite on the first floor. It consisted of a long hallway that led to a large living room with a giant sofa (that sofa!!) flanked by two armchairs in gold velvet, dramatic light fixtures, a round table with seating for four, and a credenza that hid a mini kitchen. The bedroom was a bed and two nightstands; the bedframe was a wood border nailed into the wall. The flat-screen TV in the bedroom was camouflaged by fabric embroidered with the word "Fine," which is Italian for "the end" — the classic last line of old movies. The walk-in closet off the bedroom held bathrobes, a full-size scale, and a red box filled with smaller red boxes that contained fancy toiletries like Marvis cinnamon mint toothpaste. The towels, sheets, blankets, and robes are made by Society, a company that's been producing fine Italian textiles for fine Italian fashion labels since the 1800s. Oh so conveniently, their shop is across the piazza, should you want to bring home some fine linen souvenirs.

A nook with the bathroom sink gave way to a generously sized wet room with a bathtub, a showerhead in the corner, and a chandelier. The toilet was in its own chamber on the other side of the sink. The walls in the bathroom were covered in smoky mirrored tiles. Very dramatic. 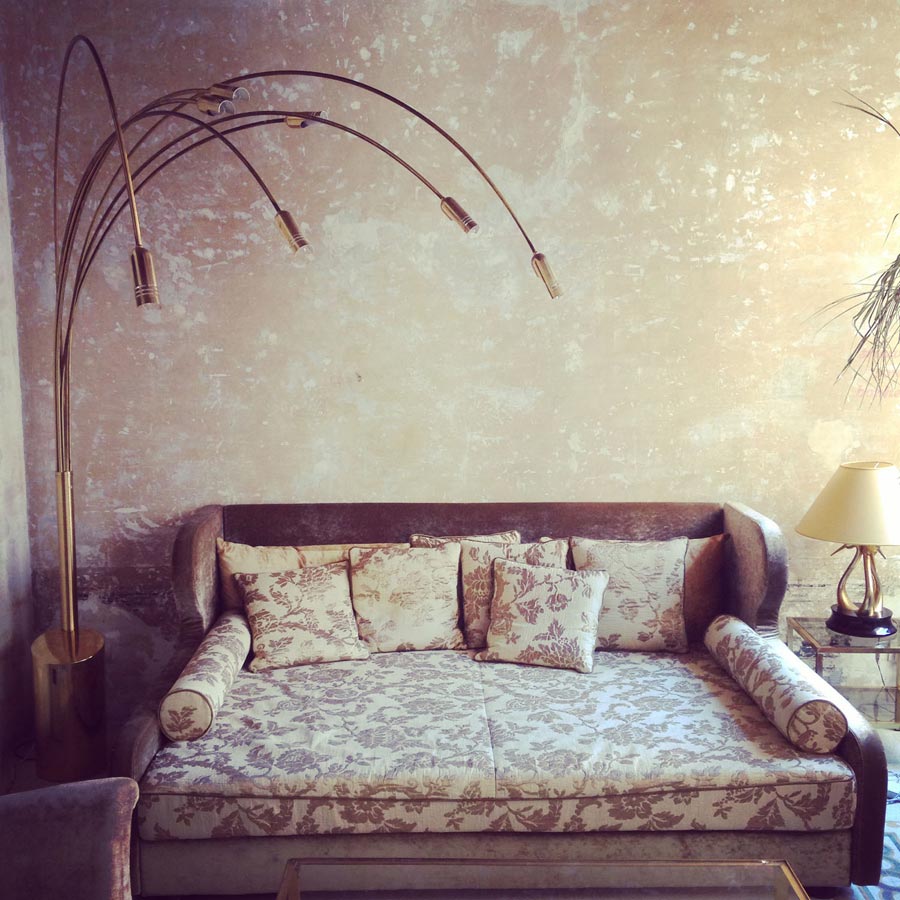 My sofa, a perch that was hard to leave. 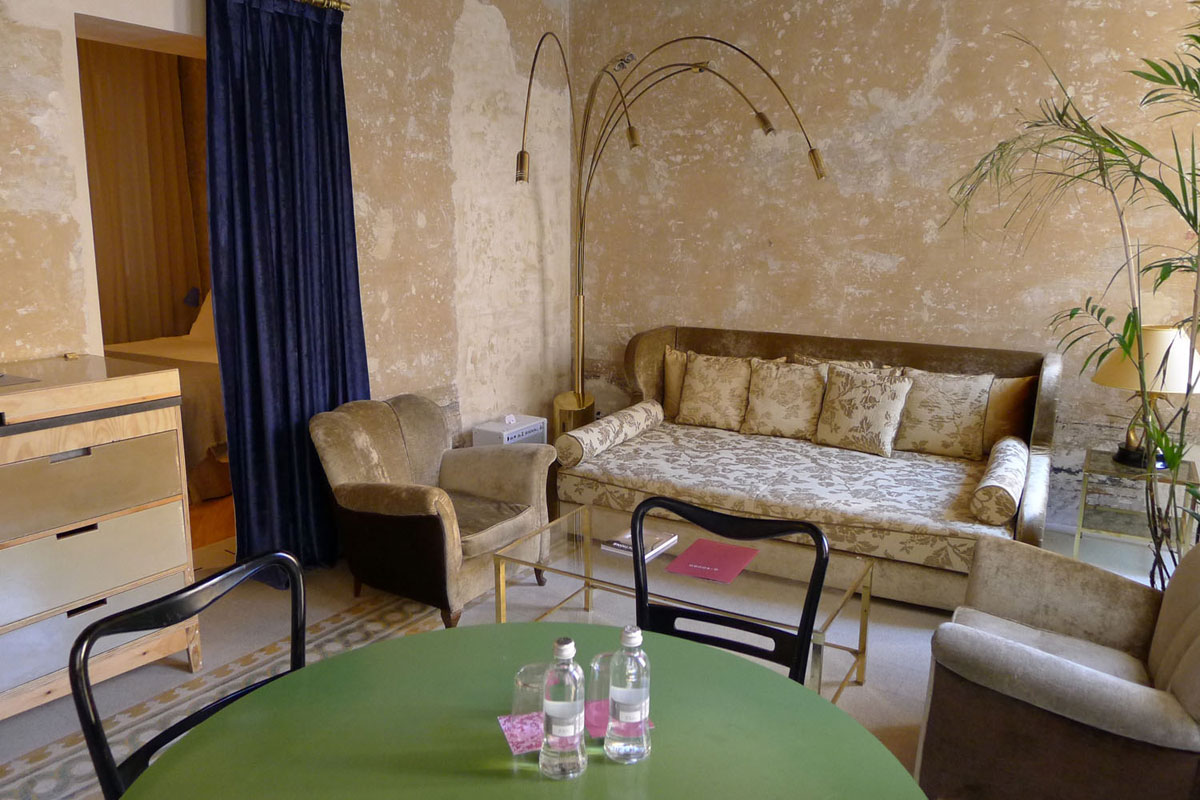 The living room in Pasquino suite, which gives way to the bedroom. 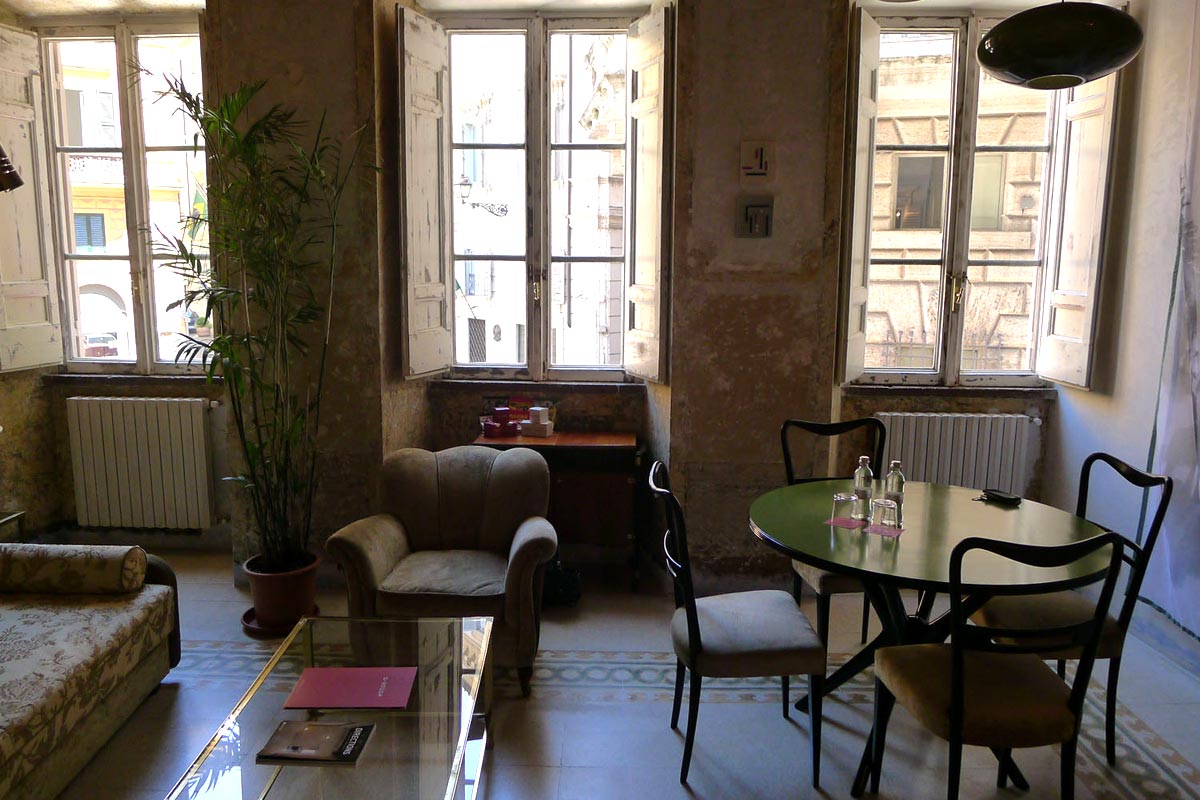 The view onto Piazza di Pasquino. 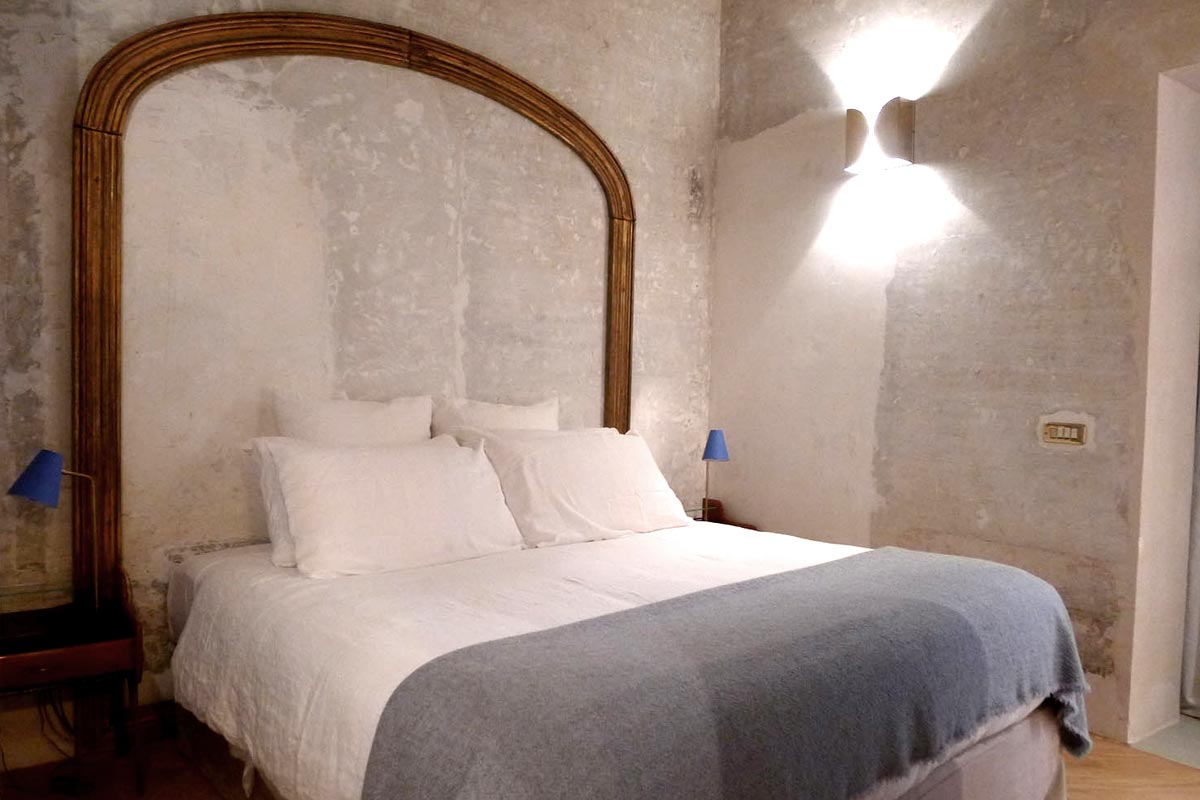 My bedroom, with the whimsical headboard. 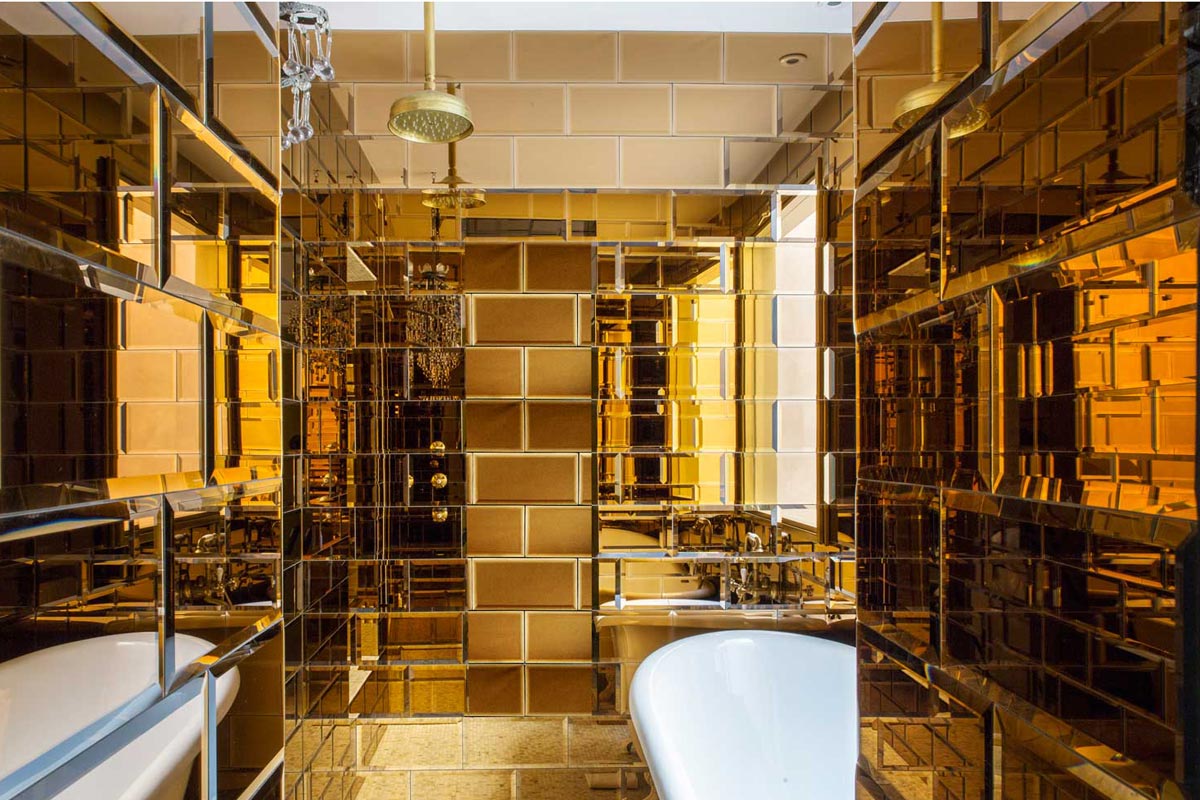 My bathroom, with showerhead, chandelier, bathrub, and all those mirrored tiles. Photo courtesy of G-Rough. 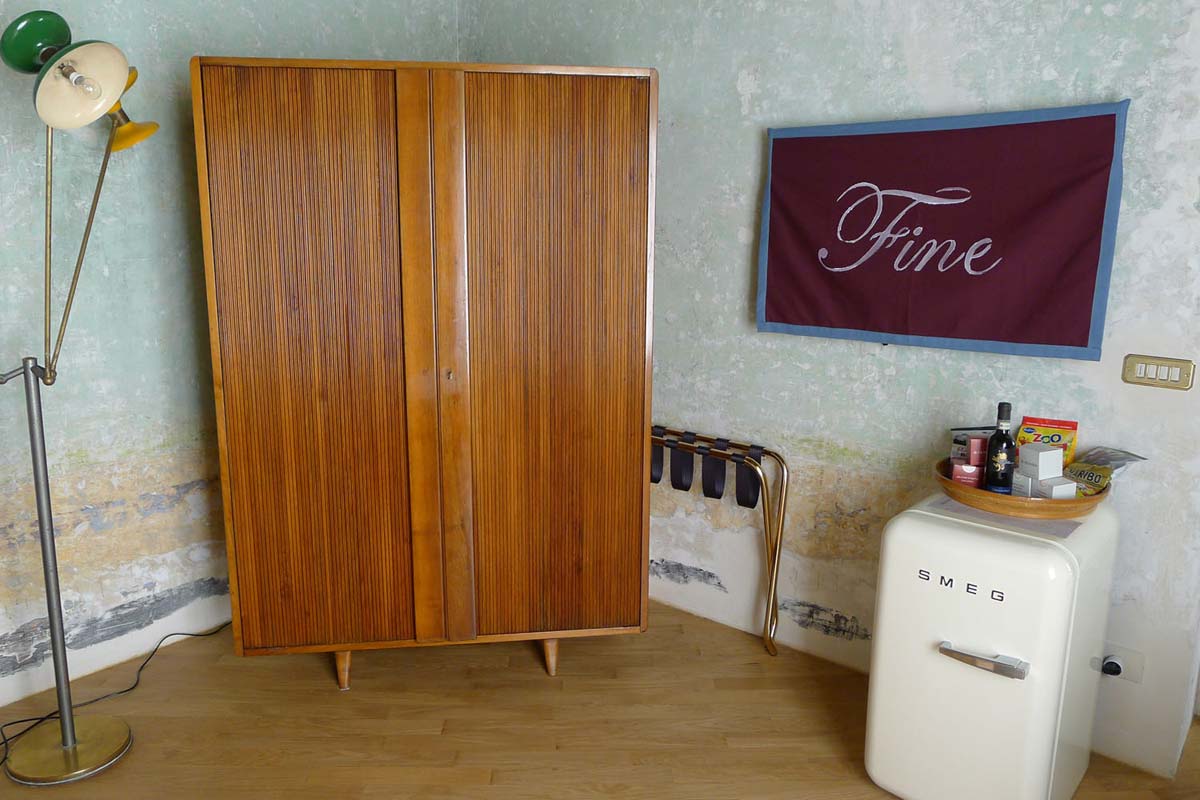 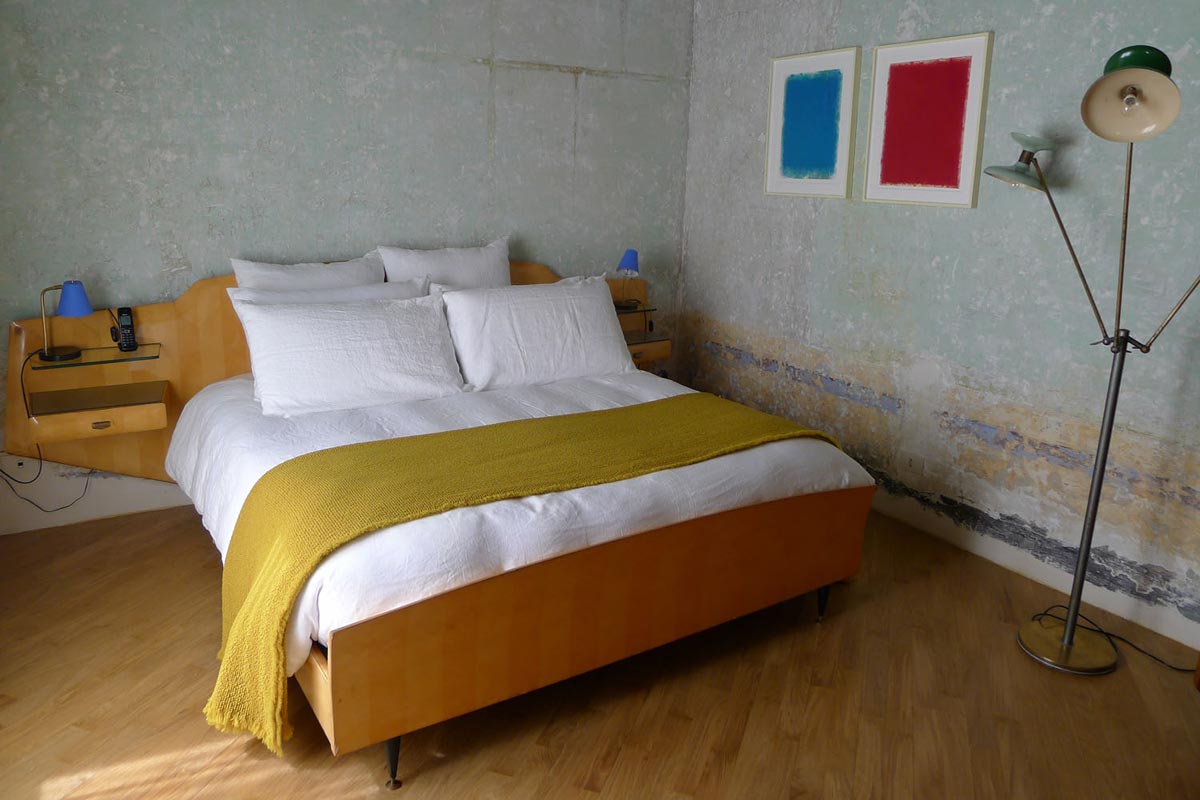 The bedroom in the room shown above.

My suite overlooked Piazza di Pasquino with a view down the street to the edge of Piazza Navona. I never closed my windows: I wanted to feel like I was part of the life of the piazza below. (On Friday and Saturday nights, this is slightly less charming if you're trying to sleep.) Apartments and suites on higher floors feel more secluded, and the penthouse has a rooftop terrace and views. Some apartments have a loft-like setup, with bedrooms up a flight of stairs.

Travelers who appreciate design, art, charm, and the thoughtful boutique hotel sensibilitiy. Suites that have two rooms could easily accommodate a small family. The hotel definitely attracts a fashion-minded crowd, but everyone I saw and met was really nice. G-Rough seems to engender goodwill.

Anyone who wants big-hotel amenities like a business center, a gym, and multiple communal spaces. 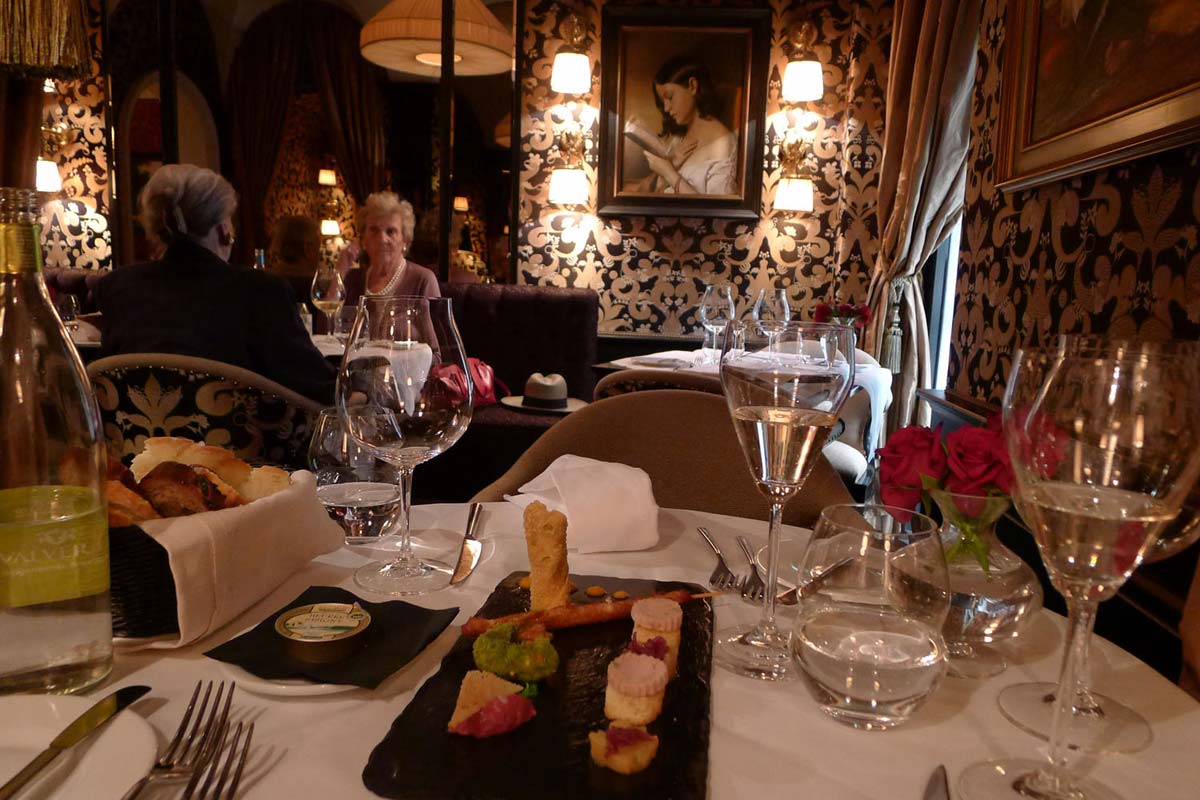 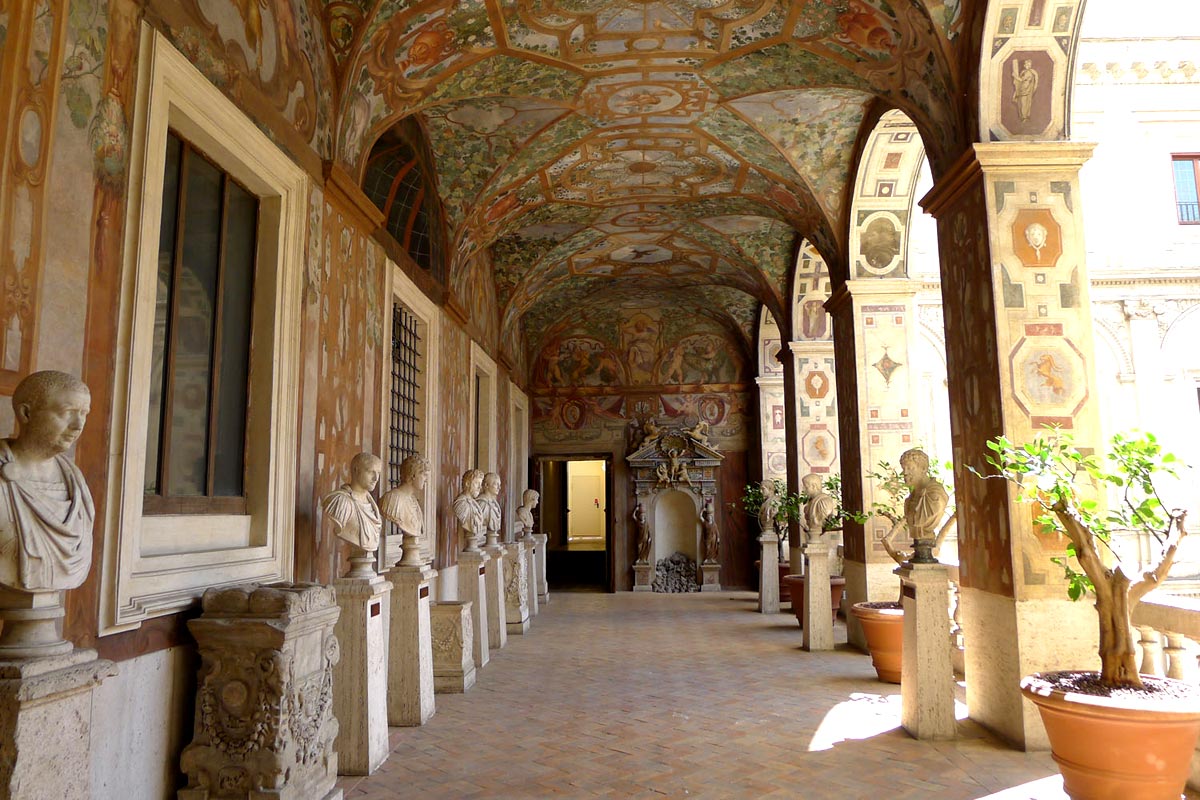 You're in the center of Rome, but you're not so central that you're bombarded by tourists at all hours. I took advantage of late nights and early mornings to have nearby Piazza Navona all to myself. Just as close is Piazza de Fiori, which is super charming and bustling. The location a block from Corso Vittorio Emanuele II makes taxi access very easy. The neighboring cobblestone streets are great for walking and exploring. Seriously, why would you be anywhere else?

It's Rome, so what isn't there to do around here? In the hotel room is an excellent list of "Suggestions from Gabriele," the owner, most of which are gastronomic: the classic, the exotic, and gelaterias according to their best flavors. Adorably, there's a yoga listing: "My guru Siri will restore your faith in life."

I arrived on a Sunday, when many restaurants are closed, without firm plans for the lunch I had planned with my Italian cousin and aunt. The operations manager (and very cool gent) Nicola De Marchis recommended nearby Osteria da Fortunata in Campo de Fiori for lunch. The menu couldn't be more simple: Here's a list of pastas, here's a list of sauces. Mix and match as you like. In fact, I liked it so much, I went back for dinner. (The Italian mamma rolling pasta in the window was picture-perfect.) 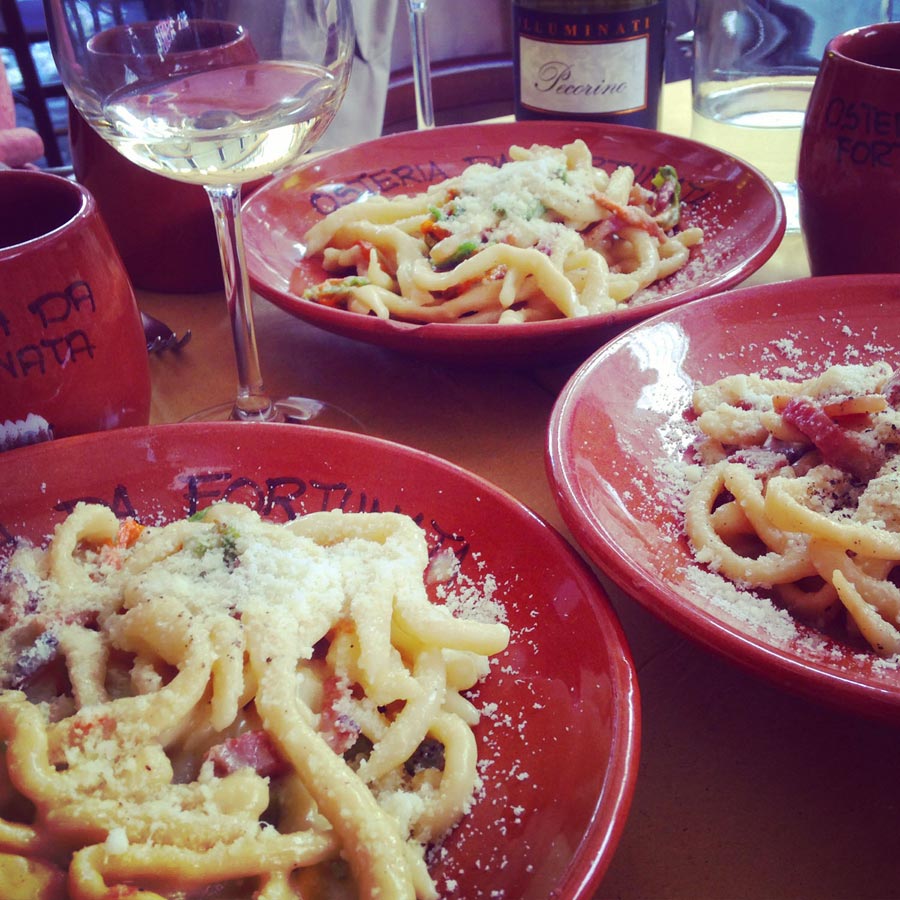 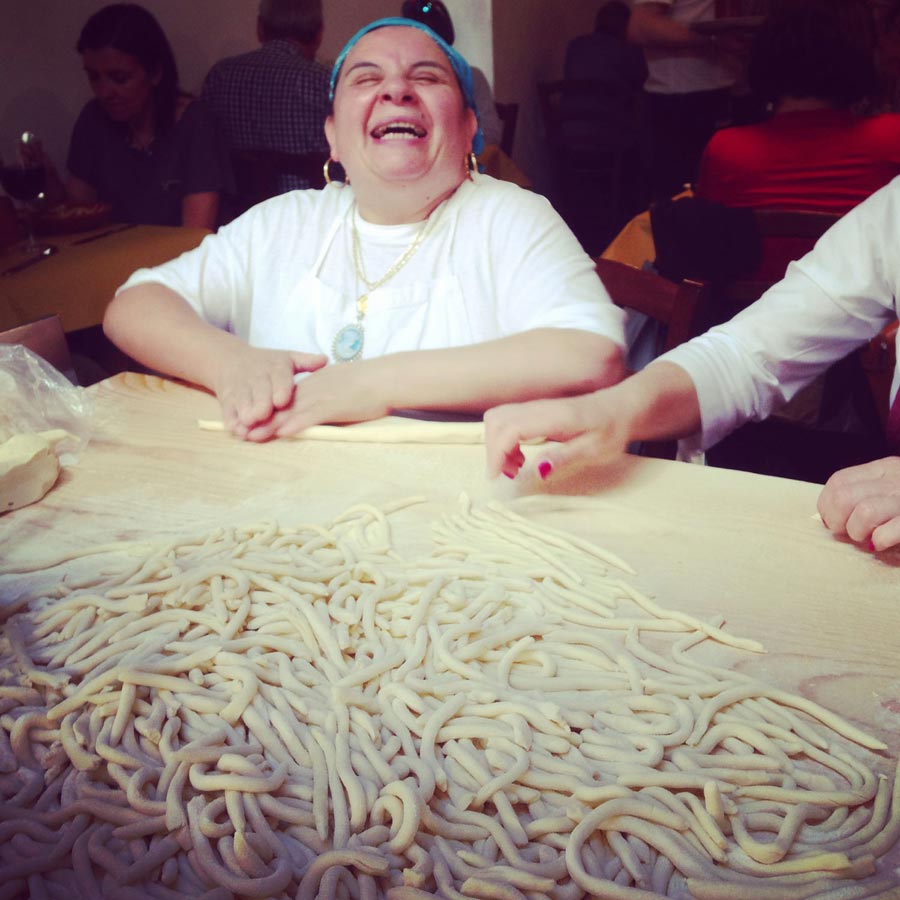 Lunch at Osteria da Fortunata, and the woman who hand-rolls it.

Otherwise, I pretty much stuck to the neighborhood, which was easy, given how many places I love in Centro Storico. I can't ever go to Rome and not eat a giant plate of salumi at Roscioli. The archeological musuem Palazzo Altemps a few blocks away was new to me and a small treasure — and not only because it was totally empty, but that helped. Come nightfall, The Jerry Thomas Project speakeasy is always fun, as is the sprawling outdoor cafe scene at in and around Piazza del Fico, where I spent most of my midnight to 3 a.m. hours. Casa Coppelle is another recent renovation, a resturant that has been remodeled by French designer Jacques Garcia. Lunch here felt like a scene from La Grande Bellezza.

"The great beauty" could easily have been the theme of my whole Roman holiday. I felt a fresh and vibrant energy everywhere I went, as if Rome was having a moment of total self-love. (It doesn't always feel like that.) The sun was out, the nights were long, the mood was happy. Departure day, needless to say, came way too soon.