Gabriella Zanzanaini and Nicolas Petit of The Funnelogy Channel, one of Fathom's 24 Best Travel Blogs and Websites of 2015, packed up their life in Brussels and are now traveling across Asia. On a bike ride through Tibet last fall, they took a quick detour from the touristy crowds to explore an old fortress and stumbled upon a barley harvest and a charming invitation to lunch.

DAOCHENG, Tibet – The autumn leaves crackle as they are crushed under the wheels of our bicycles. The rest of them hold onto their tall trees for as long as possible, not willing to let go and fall into their long winter graves. We let out short puffs of breath, cycling the ten kilometers to the red grasslands outside the town of Doacheng in the region of Tibetan Ganzi.

I remember the road looking flat, but at an altitude of almost 4,000 meters, even the slightest incline gets your blood pumping extra fast. A motorcycle approaches, and I calm my breath, trying to make it look easy, before gasping for air once it roared passed. Do you do that to? Seems so silly, but when there's an audience we instinctively hold our breath. "Yes, yes, we are fine, thank you, even though my face is bright red, this is actually a piece of cake," and once we are alone, we huff and puff till we feel our lungs again. Maybe it's just me. 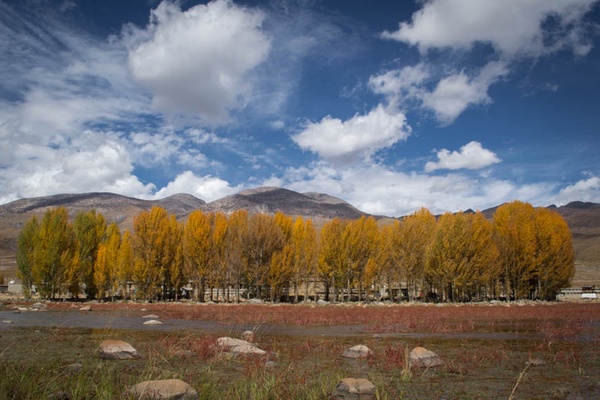 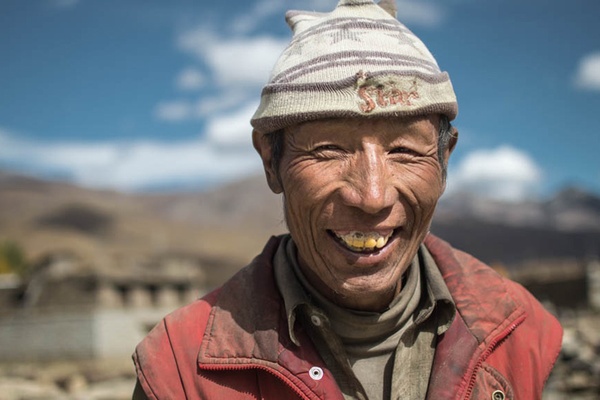 The road into Daocheng from Litang is easily one of the most breathtaking, spectacular, stunning (take your pick) roads we have taken on this trip so far. At 4,500 meters, this preserved area is open and wide. Soft hills are dotted with razor-sharp rocks and, in the afternoon glow, it is all tinged copper and rust. The plateaus have no visible end, and on its edges are solitary trees, like old paintbrushes caked with thick yellow paint soaring into the sky.

Daocheng itself is nothing to write home about, but a short escape to its outskirts is worth every push of the pedal. And so we find ourselves finally hooking our bicycle locks to some kind of haphazard construction amid a few shy goats and a curious dog. The Tibetan village of Jiyi is famous for its red grassland, a wetland sprouting a species of water pepper that develops a deep red pigment in autumn, attracting hundreds of tripod-toting tourists in peak months. 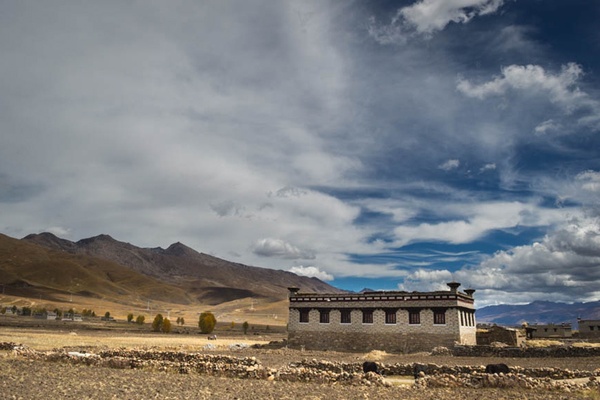 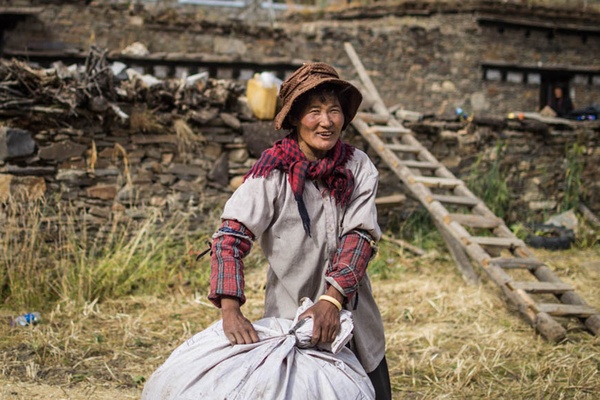 But there is movement behind the wall of amber trees, and we decide to investigate that instead. Through the narrow path shaded by orange poplars lies a network of Tibetan castles. They're not actual castles, but rather fortresses: imposing brick structures two stories high with multiple windows on each side framed in black wood. The flat roofs are cornered by miniature towers, each house proudly displaying a slightly different design. We spy a group of women carrying woven baskets and trays, their hips swaying gently in line with their laughter and rapid chatter. We follow.

In one of the castle's gardens, we see a large group, men and women busy sorting grains into large sacks for winter. Shake-shake-shake, pour, and wrap: The cleaned grains falling into bags make a melody of their own, like the percussion set of a samba band. We hesitate to go closer. There's always a moment when traveling in foreign lands where you decide whether to interact. Are we disturbing? Are we intruding? Curiosity about the unknown drives us to push boundaries, but fear can often hold us back. We decide to go for it, inching closer, saying hello with huge smiles to mask our hesitation. We are welcomed with "I love you!" followed by countless giggles. Everyone explodes into laughter and all is well. "Hello" and "I love you" are their favorite, and perhaps only, English words. 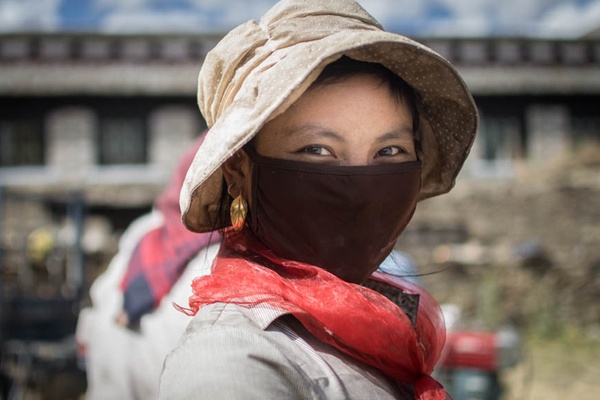 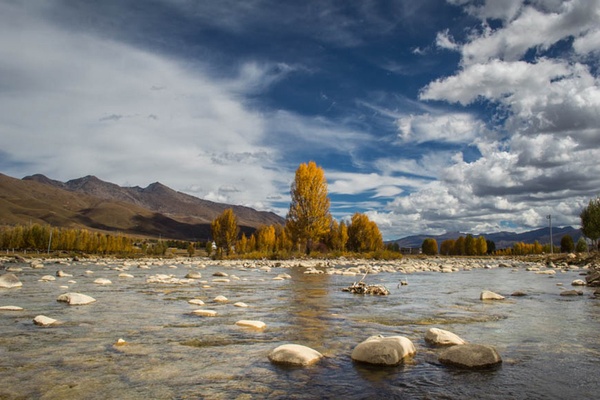 The women wear scarves to mask their faces as the dust from the grains fly up in reverse-twisters. I point and ask, "Tsampa?" to which everyone nods. This is the barley harvest. The Tibetan diet relies heavily on barley, and it's the main ingredient in the roasted flour known as tsampa (རྩམ་པ). Easily stored to last the freezing dark winters, barley is ground into flour and mixed with butter tea to form a filling and nutritious paste. In the past, eating tsampa was one of the few characteristics that applied universally to all Tibetans. There are multiple dialects, different Buddhist sects, and various regional traditions throughout the country, but everyone eats tsampa. During the 1959 Tibetan Rebellion, the phrase "tsampa-eater" was used to promote a single Tibetan identity. And while many things have evolved since then, tsampa has remained a staple.

The women hold up trays of hay and grains and pause. They are waiting for the wind. Once the breeze blows, they rattle and rock. The lighter husks and flakes scatter into the air, carried away by the wind; the heavier stalks tumble to the ground, ready to be rolled up and stored for the animals.

Once the baskets are emptied, a frenzy ensues and the largest plastic sheet is brought out, floating like a sail, held up by a legion of hands. On one end, a guy hops and rolls rapidly towards the center, wrapping the sheet as tightly as possible, ready for the next harvest at the next castle.

Everyone starts moving towards the house and we prepare to leave, until one of them gestures at us, "Mishi mishi di!" We smile and repeat "mishi mishi di," wondering what it means. We revert to our childhood ways when we do not comprehend, imitating the sounds we hear, hoping to catch some meaning by reproducing the words. He mimes pushing rice into his mouth from a bowl and says, "chi fan" in Chinese, meaning eat, it is time for lunch! 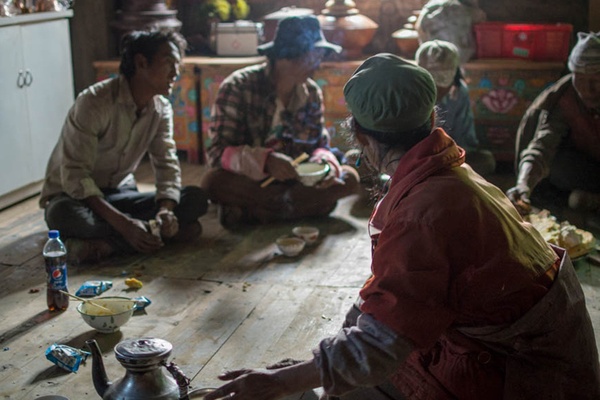 We eagerly accept, excited to be invited and to see the interior of a fortress. We shuffle in one by one where some women have already been preparing a meal. Eight families have come to help today, and all are offered lunch in return. Tomorrow they will eat and work at another house. The thick wooden doors open onto an extensive ground floor. To the left are the dining room and kitchen; to the right and almost everywhere else, the space resembles a barn. The grand exterior of the "castle" masks the poverty that dwells inside.

A dry haystack towers in the corner, a burgundy motorcycle (the modern Tibetan "horse") leans heavily against it. Various farm gear cast twisted shadows under the wooden stairs leading to the second floor. Our host waves his arm upward, where dark wooden beams protrude from the white ceiling. "We are still renovating upstairs."

The dining room creaks and croaks as we all enter and sit on the dust-covered timber planks. A green glow is projected by the curtains hanging on the tar-colored window frames, and the hot stove at the center of the room is smoking white fumes. The women enter with a heavy cast iron pot filled with a stew of cabbage, potatoes, and some kind of meat, and bowls are dished out and handed around. Everyone uses chopsticks, and soon the bowls are empty. We are given bowls of steaming butter tea (po cha, བོད་ཇ་), a concoction of tea leaves, water, salt, and yak butter. We start sipping, but before long our host waves and motions for us to hand him our bowls. Grabbing a plate of barley flour, he drops spoonful after spoonful of the powder into our tea and show us how to stir it. Soon my chopsticks can barely move, coated in thick tsampa paste. It is surprisingly tasty, almost nutty, and I can't help but imagine what it would be like with walnuts, brown sugar, yogurt, and maybe even a touch of Cognac. A big chunk of crumbly dry yak cheese is offered next. I prefer the tsampa.

Our initial conversation consists of hand signs and laughter, as our host asks us where we are from, then says "yes, France and Dalai Lama friends," an enactment of a handshake follows. But China and Dalai Lama not friends, head shakes and the back of each palm comes together to hit each other, like our version of two fists punching the other. We continue in Chinese, our one common tongue, and in some ways I am saddened, wishing I had another language to offer.

In less than twenty minutes, the whole affair is over. Bellies are full, and the men light their cigarettes in unison as the ashes fall. The red-hot butts are spent directly onto the wooden floorboards, and everyone shuffles back outside. 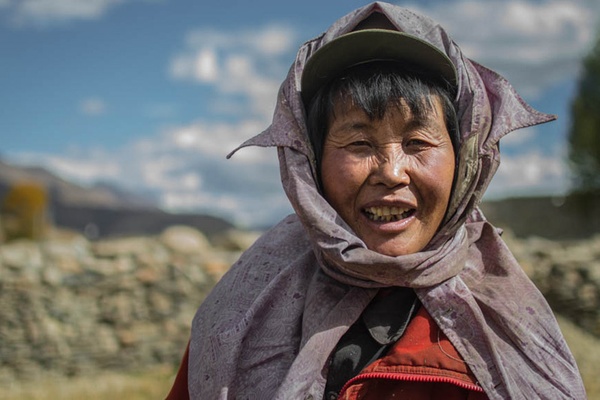 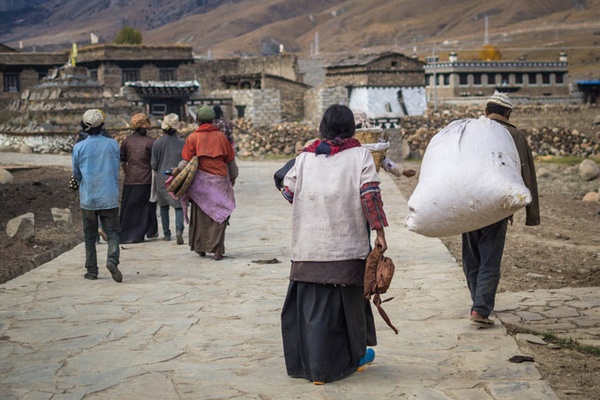 A few I love yous later, one by one some mount motorcycles, others rev up their tractors, and the rest leave on foot with baskets and woven trays back on their hips. We are touched. Once again, strangers have opened their homes to us, nourished us, and taught us something new.

We wave goodbye until they are out of sight and back in their castles, happy once again to have followed the unexpected. As we make our way back to our bicycles and tripod-toting tourists just five minutes away, we can't help but think that if we could wish on a genie's lamp, we would wish to speak all the languages of the world.

This story was originally published on The Funnelogy Channel and was reposted with permission.

Please Don't Eat The Donkeys
Dragon Kings and Existential Angst: A Traveler's Tale of Bhutan
On the Road in Tajikistan