On a recent weekend in upstate New York, Fathom's Daniel Schwartz took to the famous watershed of the Catskill Mountains to learn more about fly fishing, a sport (and to some, a religion) that has helped keep the area afloat for more than a century.

CATSKILL MOUNTAINS, New York – Tracing the verdant valleys of New York's picturesque Catskill Mountains are two conjoining waterways known by anglers the world over — the Beaverkill, a historic tributary of the mighty Delaware, and the Willowemoc, an unassuming creek that flows gracefully along the northern edge of rural Sullivan County. In them swim beautiful and revered brown, brook, and rainbow trout, the lifeblood of a fly fishing industry that has sustained tourism in the region since the late 1800s.

The sport's importance to local culture cannot be understated, or at all ignored. Commemorative plaques frame the area's embankments, demarcating famous pools where legends once cast their lines. Catskill Fly Fishing Center and Museum, perched on the Willowemoc, pays homage to big names in American dry fly fishing, many of whom teach and practice at the center and in the waters nearby. Outfitters, including the world's oldest family-run fly shop, make up the majority of commerce in Roscoe, which boasts the title of "Trout Town, USA."

Further upstream, knee-deep in what will become New York City's famous tap water — clear, crisp, and brimming with possibility — anglers assume their wading positions. Fly fishing is a long game, indicated by it's veteran following, and takes time to pick up, to say the least. But those that keep to it learn not just technique, but how standing in water for hours on end can feel like a meditation. Observing the hatch, picking the right fly, maneuvering the line, and battling with nature — surely, this is the real pleasure of fly fishing. 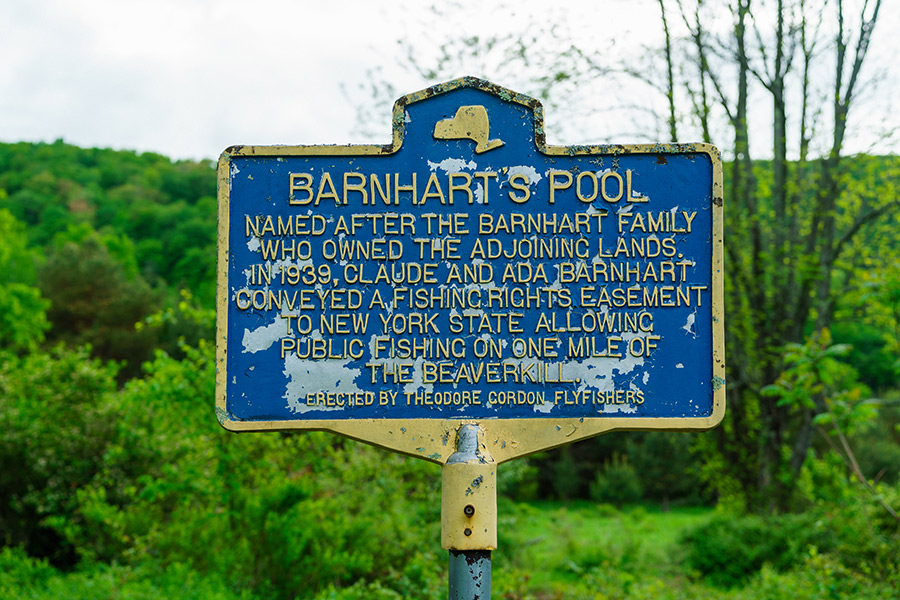 Theodore Gordon pioneered American dry fly fishing at the turn of the 20th century after observing that fish in the Catskills prefer flies that sit, rather than sink, on the surface of the water. 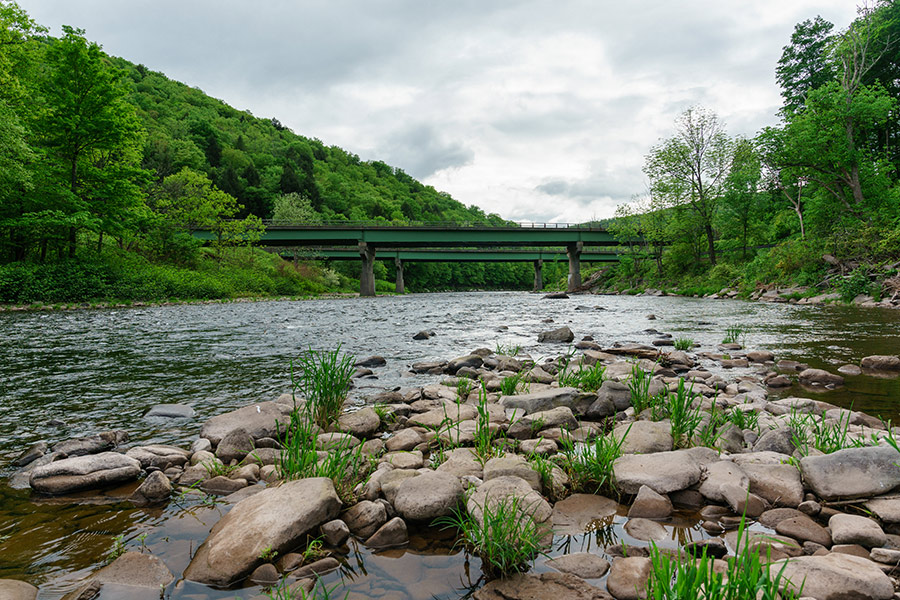 The Beaverkill runs 44 miles from its source in Ulster County before merging into the East Branch of the Delaware River. 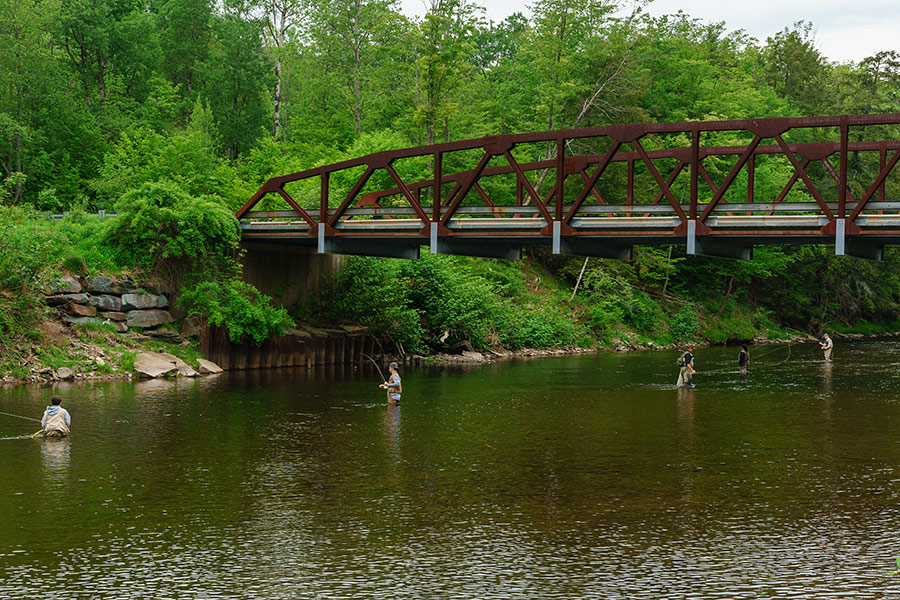 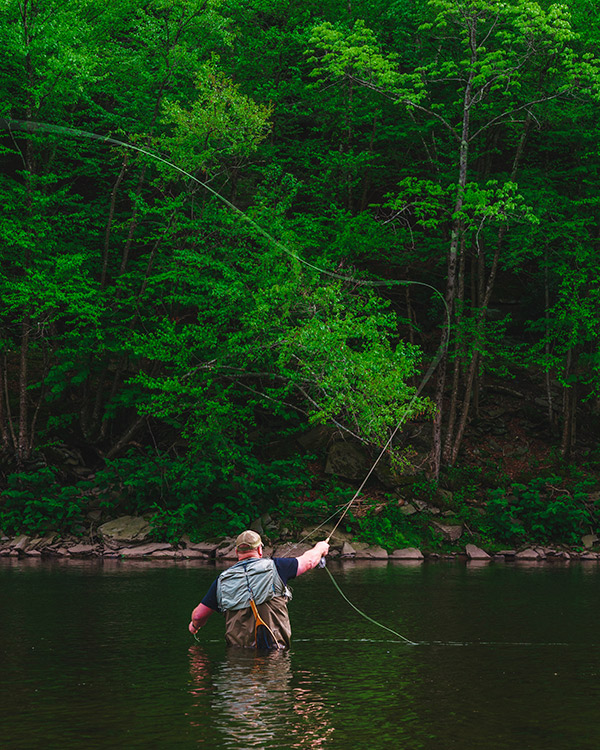 An angler at Cairns Pool on the Beaverkill casts his fly precisely where his catch is headed. 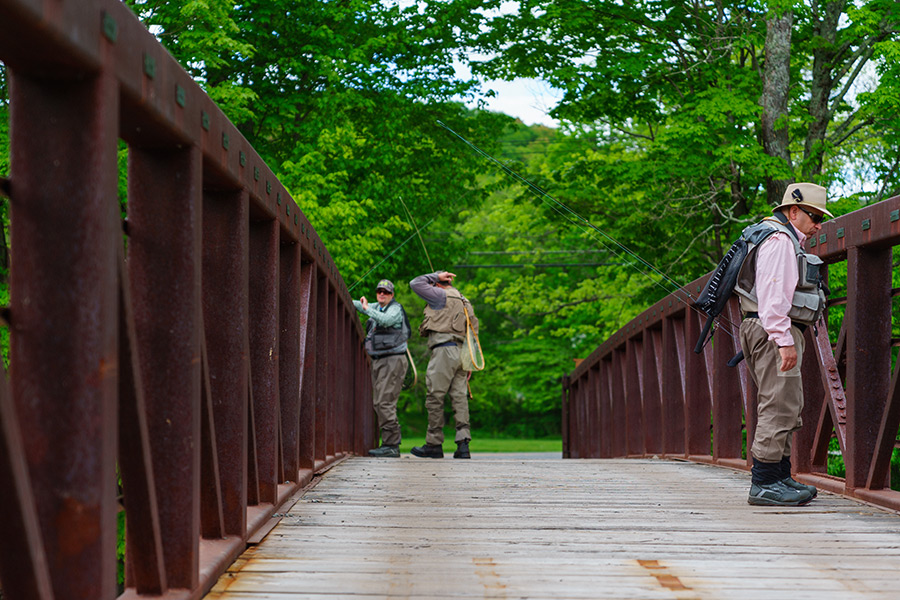 Fly fishermen from the tri-state area scout the waters at Wulff Run, an area of the Willowemoc running under the bridge that leads to the Catskill Fly Fishing Center and Museum in Livingston Manor. 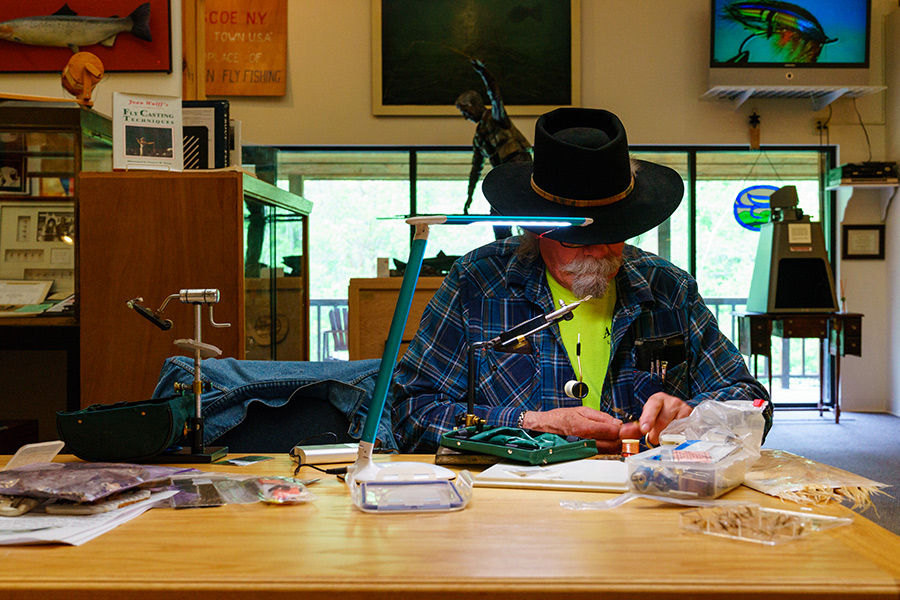 At the Catskill Fly Fishing Center and Museum , professional fly tyer Bill Newcomb uses a vice, different colors of line, and ornamental accents like chicken feathers to tie flies in the famous Catskill style, practiced around the world, for his fellow fishermen. 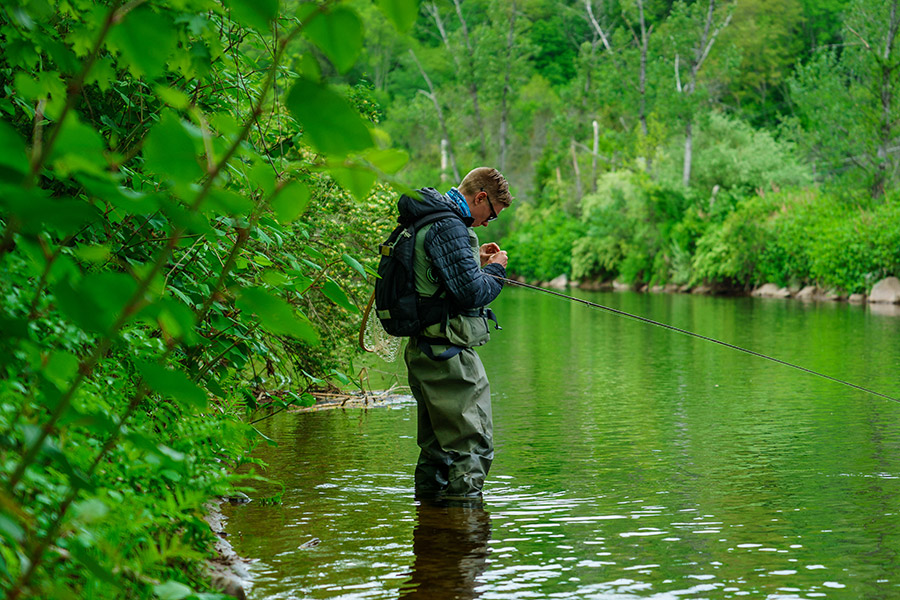 Picking the right fly for each fishing session means knowing what insects trout are currently feeding on. 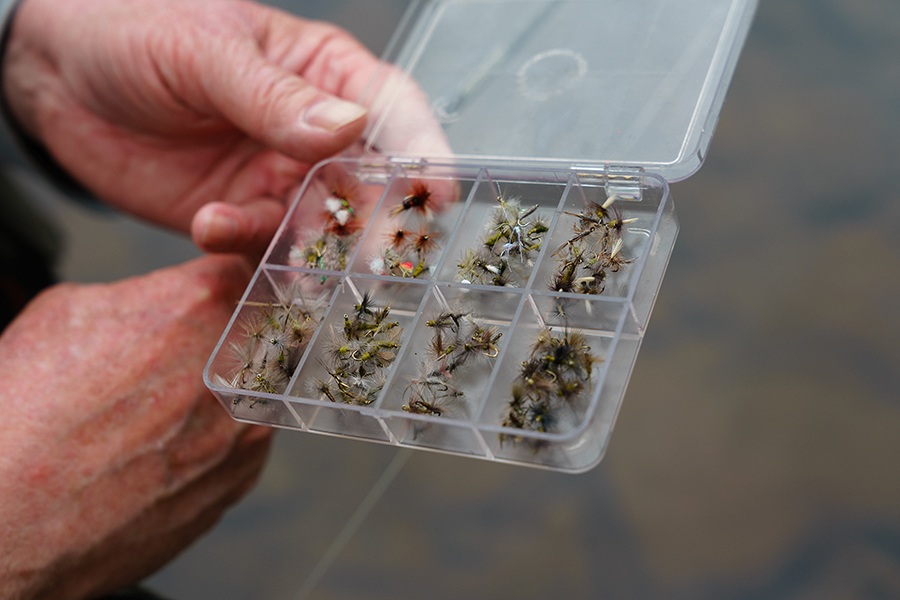 Anglers carry flies that mimic insects at all stages of their reproductive cycle. Nymph flies are pictured above. 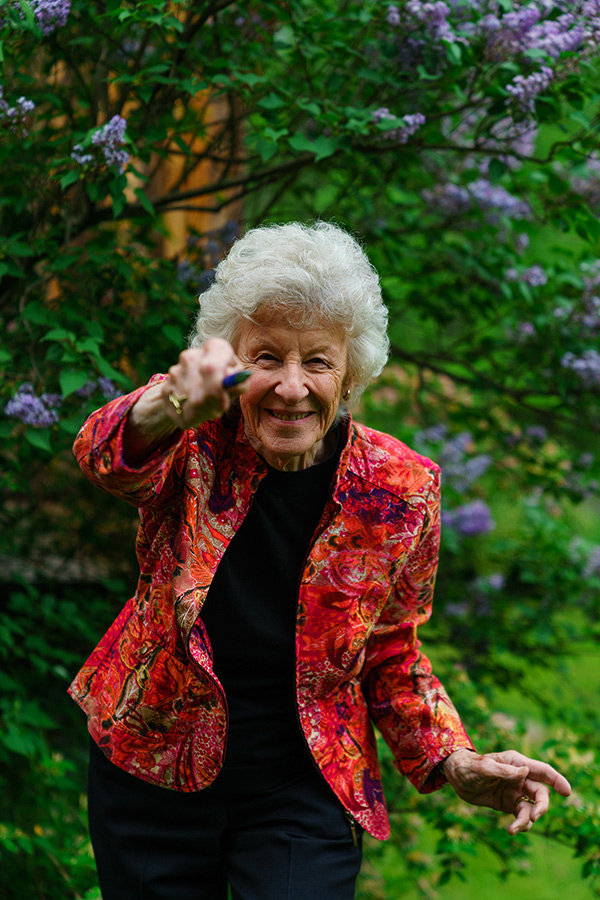 Casting is more rhythm than power, so it comes as no suprise that Joan Wulff, who held the title of national casting champion for seventeen years against all-male competition, should also have a lifelong passion for dance. At 89, she is known as the First Lady of Fly Fishing, runs a fly fishing school in Livingston Manor, and was spotted giving out pointers at the Catskill Fly Fishing Museum. 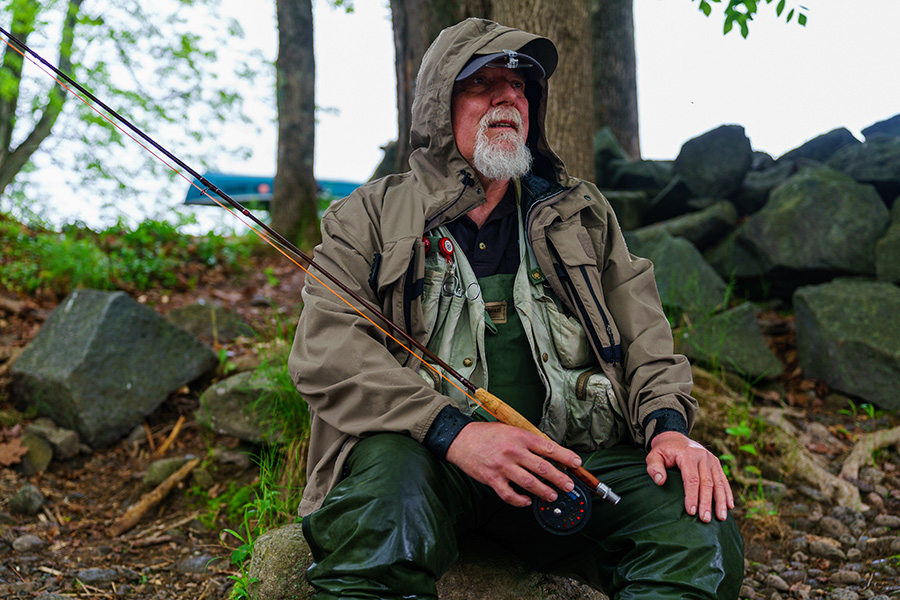 A local fisherman reflects on the session at Wulff Run before breaking for lunch with his father. 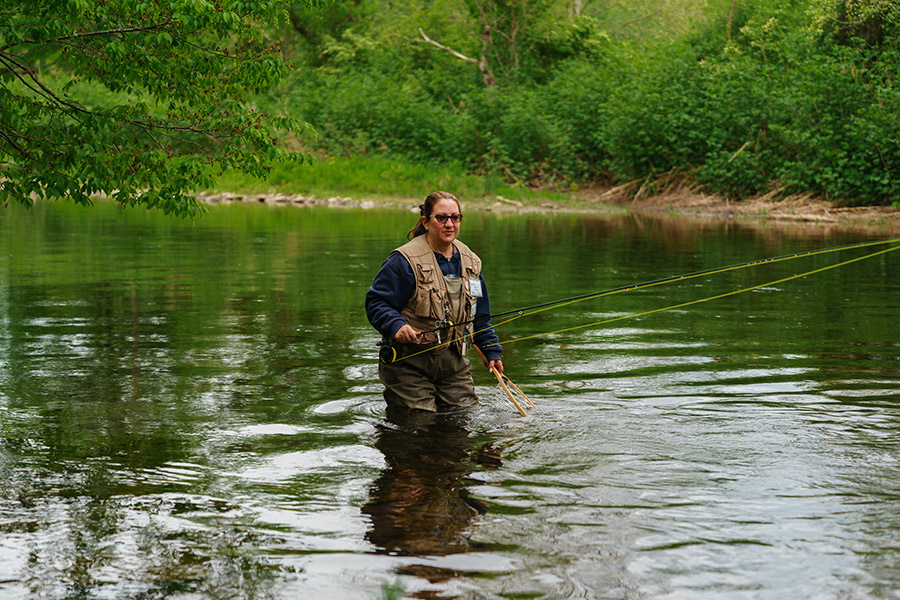 An angler from Long Island repositions in the Willowemoc. 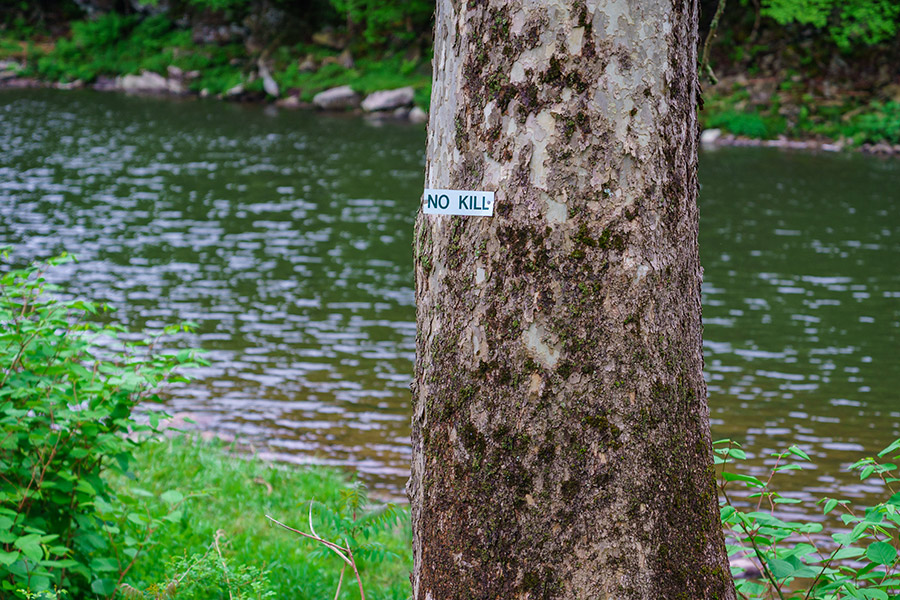 Though DEC agents are a rare sight, the fly fishing community is quick to call out anyone who violates local regulations. 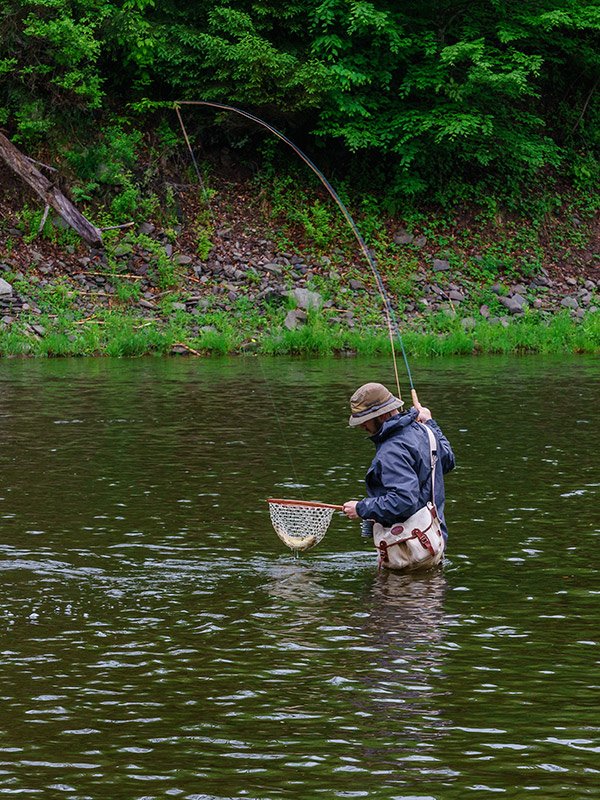 A fisherman marvels at his catch before releasing it back into the water.