Favorite destinations: Western Sumatra (for full immersion), Lisbon (for the booze and the seafood).

Dying to visit: India. Disgraceful that I've never been.

Always in carry-on: Headphones for the avoidance of babies.

Concierge or DIY? Concierge definitely. They are the best thing about great hotels and alone they justify the price.

See it all or take it easy? EASY! But we saw a lot in Rome this summer because it is such an arrestingly beautiful city for which no guidebook can prepare you.

Drive or be driven? Walk. Cars suck ass unless you're in the bush.

Travel hero: The guy who landed the plane on the Hudson — a true superhero in my view.

Weirdest thing seen on travels: In Madagascar, twenty years ago. People were unburying their dead and partying with them before refreshing their mummy robes. And the entire population of three villages was following us down to the beach because they’d never seen Europeans. When we took our surfboards out of our bags, there was a round of applause and cheering! I'll never forget that brush with another world.

Favorite Hotel: The Goring because it is unashamedly, authentically English to the core. And the service is human, genuine, and brilliant.

I dream about my meal at Mugaritz in Spain's Basque country. As the big guy in Austin Powers would say, "I ate a baby!" (Okay, a turbot embryo.) 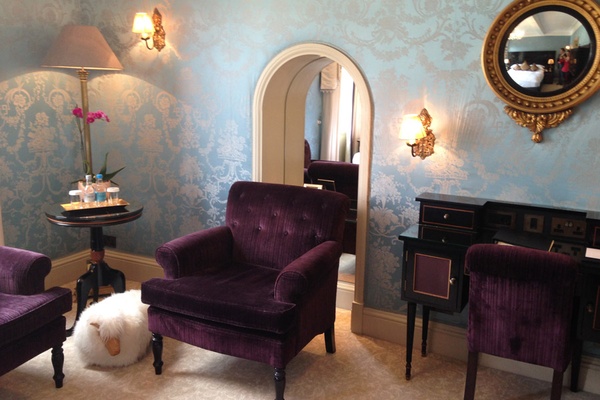 The Goring Hotel sheep pop up in unexpected places throughout the hotel. Photo: Pavia Rosati

Favorite childhood travel memory: Ice cream, Naples, age twelve. It was the first and last time I spoke to a prostitute. (It was by mistake, and, yes, the naughty bits were flashed at me!)

Everywhere I go, I check out the food. Not for any reason to do with connecting with the heart of the place, just because I like eating.

When I arrive in a new place, I learn the lay of the land by walking about or having a run. I hate running, but not when there are amazing things to see.

I always bring home a whole leg of Iberico de Bellota if in Spain, clothes if in the USA, TimTams if in Australia.

If I never return to Morocco, it'll be too soon because their style of robbery is less fun than elsewhere.

I travel for the sheer necessity of getting out of town.