Just back from: Tokyo.

Was it your first time? Nope, it was my fourth. I went seven years ago with NYLON. Before that, once in high school and once after.

How long were you there? One week. 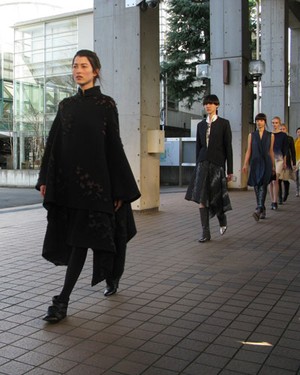 Why did you go? Tokyo Fashion Week. JETRO (Japan External Trade Organization) hosted journalists and buyers wanting a a peek at what's happening on the runways, showrooms, shops, and streets.

Who were you with? I traveled solo, but immediately upon arrival formed a posse with the fantastic Mandie Erickson and Sarah Sallee from Showroom Seven/Seventh House PR and Heidi Hoelzer from Scoop NYC. Shingo "Ringo" Nagai from Jetro, Satoru Sugimoto from Drumcan Media, and our trusty translators Takahashi-san and Naoka were never far off. Every day brought an entirely new fantastic set of creative types, media influenceres, and local characters my way.

What was the best tip you got before you left? Journalist Rebecca Willa Davis, who spent much of last year in Tokyo, gave me the best advice: Don't be afraid to get lost, which was comforting while trying to navigate a city where most of the streets have no names. Bring more business cards than you think you will ever use because that's how you do all introductions. I had a handful of cards left from the 300 I packed. Be on the train by 11:30 p.m., or be prepared to drink until 6 a.m. when the public transportation system opens.

What's the #1 tip you'd give a friend who wanted to go? Good manners go a long way — especially when there is a language barrier. 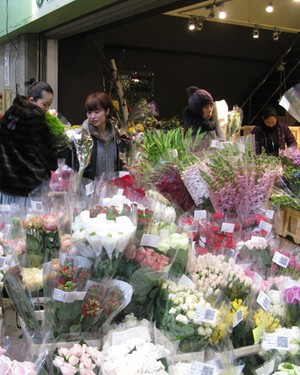 What did you do? Aside from fashion shows, showroom appointments, store visits, and designer meetings, I got lost looking for extreme coffee art and found doughnuts with camouflage glaze. I woke up at the crack of dawn to see the flower market and woke up in the middle of the night to see the fish market. I got sucked into magazines at T-Site, the beautiful new Tsutaya mega media complex. I participated in my favorite leisure activity: people watching. At every turn, I saw fashion used as an authentic form of personal expression and it was awesome.

Were you there for the right amount of time? It feels like I could have been there for years and never done the same thing twice.

How did you get there? ANA from LAX to Narita. ANA just introduced staggered business class, giving each seat a lot of privacy. It's like you get your own cozy pod in which to enjoy your subtitled movies and cold sake. They also have non-stop flights into Haneda, a smaller airport that's closer to the city center. I took a bus to the hotel. It's not as bad as it sounds. The train is an option, too. As is an hour-long taxi ride, but that can be pretty pricey.

This was especially great: I've never seen a hotel tub fill up faster.

But this wasn't: The business hotel were we stayed lacked any appeal. And wireless internet. 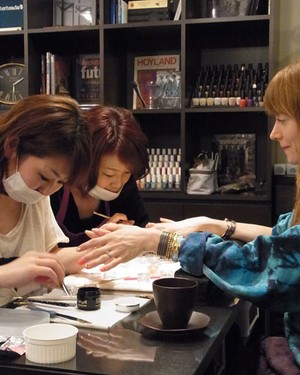 Speed round of favorites.
1. Meal: My lunch set at Chano-ma in Nakameguro. I was charmed by the extra-wide window seats where friends sat cross-legged and rested their plates on wooden trays as I was by my actual lunch set of rice, miso, lotus root, natto with avocado, and bean sprouts.

2. Neighborhood: I loved walking around Jiyugaoka and grabbing sweets at Feve, popping ito design stores like Pieni Koti, concept shops like Idee, and the just-open Today's Special. I wish I'd spent more time in the neighborhoods on the west side of Yogogi Park where lots of new small businesses seem to be cropping up.

3. Thing you did: Discovered Nail Studio Asa where I got a wild-style Japanese manicure from totally amazing nail artist Yuko Kamikatahira. She custom mixed every color! We named it Miami Mondrian.

4. Hangout: Peak Bar at the Park Hyatt wasn't a bad place to regroup. A stone bench I shared with a bunch of Japanese grandpas in the bottom of Tokyo Midtown mall made a good perch for people watching while scarfing onigiri on a particularly busy day.

What's the local speciality? You can get anything you want in Tokyo, but I would say the local specialty is taking a common concept — pasta, strawberries, coffee, macarons, whatever — and elevating it to an art form.

One place you didn't get to visit, but wanted to: I missed out on Koenji and Shimokitazawa, two neighborhoods known for their vintage stores. There is so much to see and do! I also wanted to see the Mori Art Museum. 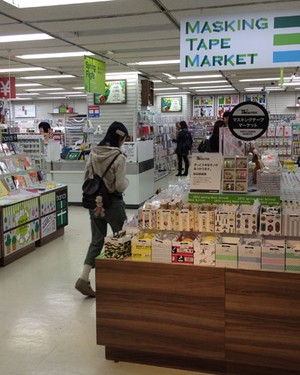 Let's talk about stuff.
1. Glad you packed: Chocolate bars from Valerie Confections to give as gifts to the people who helped me along the way. Omiyage, tokens of appreciation or small souvenirs, are a big part of Japanese culture. Also, an American-sized toothbrush. The one in the amenities kit in the bathroom was about the size of a cotton swab.

2. Wish you'd packed: Pocket-sized Wi-Fi contraption. It's not uncommon for there to be no network connection and free internet access is scarce. I had good luck at fancy hotels and the Apple store.

3. Didn't need: My rain boots. Turns out you can be too prepared.

Would you go back? If so, what would you do differently? I would stay longer. Find an onsen. Eat teppanyaki. Spend time in Ginza checking out the snazzy department stores' kimono floors. 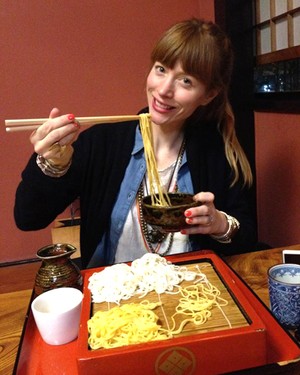 What was your Kodak moment? Grabbing lunch with my most favorite friend from kindergarten and her mom, who moved back to Tokyo over 15 years ago. I hadn't seen them since fifth grade graduation. (Hey Facebook! Thanks!)

You can't stop thinking about: The inspired and inspiring G.V.G.V. runway show, a vampy mashup of rockabilly and late 60's/early 70's leisure-glam in sparkles and brocade. And the matcha green tea lattes at Starbucks. Embarrassing, I know.