Want to travel to far-flung places? Who says you have to leave the kids at home? Fashion designer Cynthia Rowley redefines the meaning of family vacation from a yak-hair tent pitched thousands of feet above sea level.

BHUTAN − For most people, spring break means Disney or Dayton. For me, I like to go off the grid and have a big adventure. A lot of people think having kids restricts your travel options, but I think it encourages you to be more imaginative. While your children are relatively young, you have a chance to expose them to the wonders of the world. They can experience a culture firsthand and learn that it is possible to pack for a ten-day trip and carry their own luggage. It’s every man for himself in our family, even if you are nine years old.

When I was a kid, summers were spent driving around the country. We camped in national parks and lived out of the family station wagon. While I prefer a more far-flung adventure nowadays, the nomadic lifestyle was impressed upon me early in life. And the family stories live on.

I want my kids to experience the adventures I had in an un-compromised culture that hasn’t changed in a thousand years. That's how we came to Bhutan. And when we arrived at the Uma by COMO, Paro, I was so overcome with joy that I cried (to the extreme embarrassment of my kids). If you’ve ever seen the movie Lost Horizon — where a group of people find Shangri-La nestled in the Himalayas — then you will recognize Bhutan. It is a monarchy with a young king and queen that are so revered, every person in the country wears a pin graced with the royal portrait. The country is so small (population: 700,000) that the Harvard/Oxford educated king can make a rule and have the entire country on board. Everyone wears traditional Bhutanese dress, the architecture must be Bhutanese (buildings are no more than six stories tall), and photos cannot be taken in any of the temples or monasteries. Because of that last rule, everything you see must be etched in your memory (not a problem). The country makes a point of preserving its culture and the largest export is gross national happiness. All negative prejudices about mankind are tossed out the window because everyone is genuinely nice, trustworthy, and gentle. 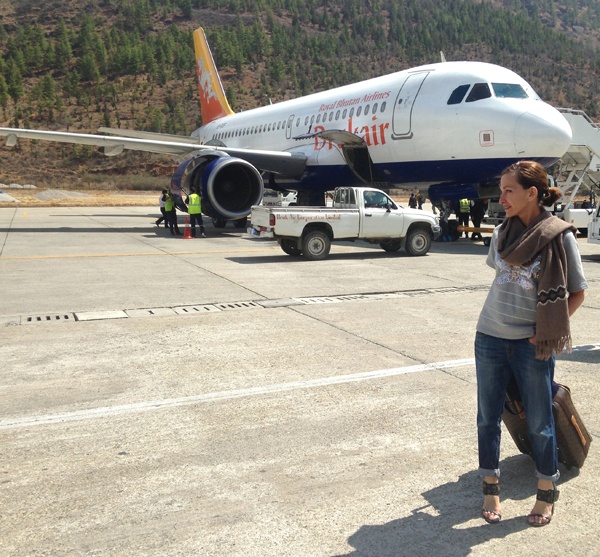 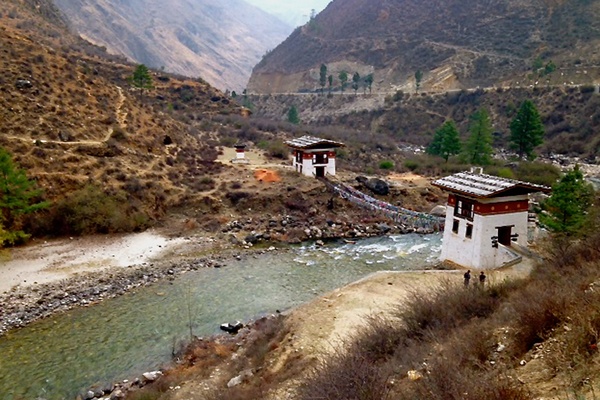 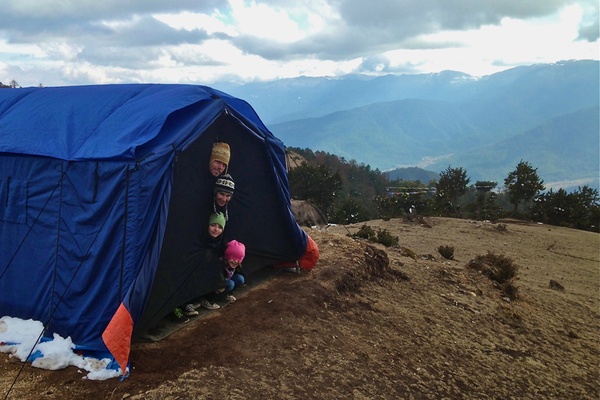 The author on the tarmac; serene vistas; the family on a Himalayan trek.

After wonderful early morning breakfasts, days were spent thinking, driving on winding dirt roads with incredible vistas of Himalayas, and visiting specular historical landmarks like Tiger’s Nest, which is the country's crown jewel. Our trip to Tiger’s Nest ended up being an epic journey. We hiked to 13,000 feet — well above the tree line and clouds — to a campground where we pitched yak-hair tents, cooked traditional Bhutanese meals, slept in sleeping bags, and woke up at dawn to eight inches of snow. An overnight camp in the Himalayas is not for the faint of heart. My nine-year-old daughter, one of the youngest to climb the mountain, got altitude sickness. We all took turns bringing her down the mountain on piggyback.

We trekked twelve hours in two days. When we got back to the comfort of our hotel, we realized the power of this once-in-a-lifetime family experience. I guess we did go to the Magic Kingdom after all.

The only airport in Bhutan is located in Paro, one of the main cultural centers of Bhutan. We flew in by way of Bangkok, Thailand, but the airport also has flights to/from Calcutta, Delhi, and Kathmandu, serviced by Bhutan’s national airline, Drukair. COMO is a fully-licenced tour operation that takes care of visas, flights, guides, and treks. They also provide English-speaking guides.

Chef Eric Ripert Discovers Bhutan
Ball's Out: Adventures in Bhutan
My First Time: The Lowdown on Bhutan
How to Raise World-Curious Kids