What's a Frenchman to do when he can't stand the cold winters in the city where he lives? Embrace something even colder: the Arctic Circle. Laurent Vernhes, Tablet Hotels co-founder and CEO, shares notes from his shiver-inducing trip.

KIRKENES, Norway – I try to never complain, but during New York's five months of winter, I always end up carping abut the cold. I truly hate cold weather. So this year, I thought I would try to embrace it by spending a few days way above the Arctic Circle. In the dead of December. I though: Perhaps I can learn from the best! I brought my daughter and one of my two sons to Kirkenes, Norway, to do three things that, for better or worse, are best enjoyed during the Arctic winter: to go dogsledding, to chase the Northern Lights, and to stay in a hotel made entirely of ice and snow.

It's easy to get lost in the seemingly infinite network of fjords and islands that is the Norwegian coastline. Kirkenes is perhaps more remote than any of Norway's coastal towns, located in the extreme northeast, 400 kilometers above the Arctic Circle, close to the Russian border and east of practically all of Scandinavia. No surprise, then, that despite the presence of an airport with daily flights to Oslo, only 3,500 people live there. Apparently the climate there is relatively mild, considering the latitude, but it's more than cold enough! It also happens to be one of the best places to be for a chance at viewing the Northern Lights.

Although the Northern Lights are that box you check, you can't count on them, as there's an element of luck involved — the atmospheric and solar conditions have to be just right. So whatever you do, you can't miss the opportunity for a dogsledding expedition. After all, this is a small town, and you're not here for the museums, or the shopping, or the nightlife. The sled dogs are surprisingly wild — not aggressive towards humans, but full of energy. (I thought I had seen energy, raising two young boys, but these dogs are way beyond.) Not picture-perfect huskies, either, but slightly crazy-looking dogs. They're truly only happy when they're running. As soon as the sled stops, they get agitated and begin to howl. In fact, the driver has to anchor the sled in the snow, otherwise the dogs will take off running on any cue. Our pilot told us that the most important thing for a driver to remember in a crash is to never let go of the sled. Otherwise, the dogs will just keep running, dragging the sled for hours.

While the permanent midnight experience is somewhat exciting for a few days, it's easy to see how it can get depressing fairly quickly. In Kirkenes the sun doesn't rise between late November and late January. We had about two or three hours of twilight each day before it was back to darkness. One day we accidentally slept 14 hours, and woke up an hour after “daylight” had ended, which made it 48 hours in a row of total darkness for us. For some reason, the two hours of twilight are when we felt the most tired. Many things seem to run late, maybe because everyone loses track of time without a sunrise and a sunset. 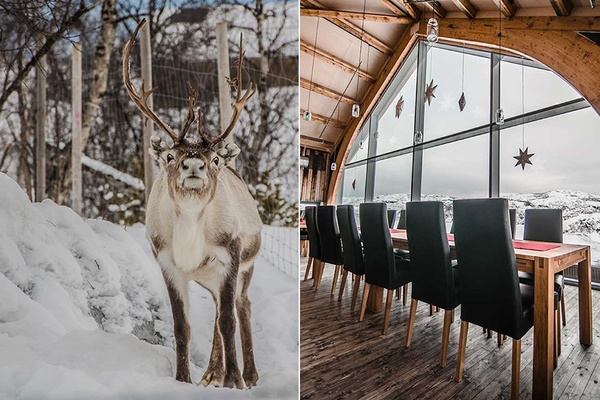 Authentic reindeer. And the restuarant at Snowhotel. Photos courtesy of Kirkenes Snowhotel.

I've stayed in a lot of hotels, and the Snowhotel is a memorable experience. (There are others, in Sweden, in Canada, and a few other places.) It's like a sculpted igloo, and thanks to the insulation of the snow, it's not that cold: –4°C. It's not warm, either, but you're quite comfortable inside your sleeping bag. A trip to the bathroom in the middle of the night can be a tricky affair, though. But you can — and should — really only spend one night in the Snowhotel. For the other nights there's Thon Hotel, which is a decent option for the rest of the stay. And Thon's restaurant is probably the best in town.

Let's just say that Kirkenes is not a culinary destination, despite a variety of possibilities, including a Moroccan restaurant and a Sicilian pizza place. Aside from the Thon Hotel's restaurant, there's nothing you need to go out of your way to visit. Just be sure and eat some of the local delicacies. King crab is fresh off the ocean there. I wasn't hugely impressed with whale meat — it needed a spicy sauce to make it palatable. There's a lot of reindeer meat as well, and I quite liked moose, which is a bit like ostrich, and maybe not so different from beef. One thing I did learn about Norwegian cuisine: always order the soup. They know their soups.

WHAT TO DO WITH KIDS

This place is perfect for a memorable little family adventure. There are reindeer everywhere, and they're tame enough to hand-feed. The kids loved sleeping in the ice hotel, and everyone turns into a kid when the Northern Lights come out — people were running out of the restaurant to look at them for a minute or two at a time, before running back inside to get warm. But by far, the dogsled experience is what my kids will remember. They're still talking about how crazy and wild the dogs are, how full of energy. 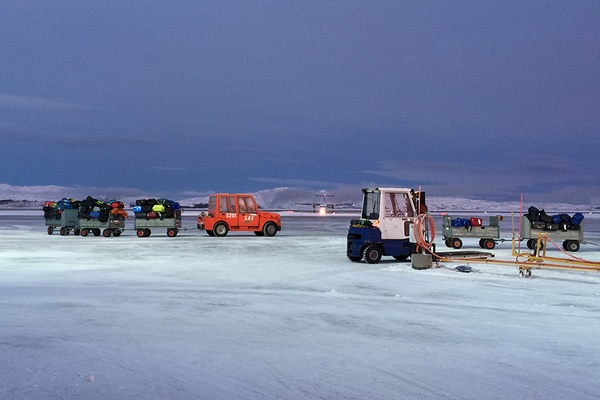 How to get there: Kirkenes is so remote, air travel is the only way to go. But there are cheap direct daily flights from Oslo, so it's easy. Getting around: Taxis are expensive, but the people who organize your activities often have shuttle service. I suppose it's possible to rent a car, but I don't know why you would want to spend your time driving on ice. When to go: To do what we did, you have to go in winter. It's insanely cold, but that's the way it is.

What to pack: Layers! Many, many thermal layers. It's hard to imagine ahead of time just how cold it will be. When the Northern Lights appeared, we were having dinner and tried to step outside in our dinner clothes, and we could only last perhaps thirty seconds at a time before it became painful and we had to go back inside.