Traveling way off the beaten path? You may very well bump into Project Bly. The savvy shopping adventurers research, photograph, write about, and sell products sourced directly from bazaars across the world. As part of our Shopping the Globe Week on Fathom, co-founder Rena Thiagarajan shares a few of her favorite back roads in Hanoi, Vietnam.

HANOI, Vietnam – The City of the Soaring Dragon, the Eastern Capital, The City Amid the Waters: Hanoi is a place with many names, but none have been as long-lasting as Ke Cho, The Market. Despite the national flag sporting a five-pointed communist star, everyone here seems to be selling or buying something. In every alleyway, a noodle shop; on every corner, a flower shop; on the back of every motorcycle, a stash of goods. If you only have a day in this city, there’s no better place to spend it than at the markets.

The wholesale market located under Long Bien Bridge sells everything from live frogs to sweet mangosteins. The market is chaotic and colorful, and the produce as fresh as it gets. In a city where food is so essential to daily life, this market is the perfect way to start your day, which will undoubtedly include some of the best street food you’ve ever tasted.

Take a few minutes to check out the scarred and battered Long Bien Bridge. First built in 1903, Long Bien was relentlessly bombed and repaired during the war with America. Heralded by the communist party as a symbol of Vietnam’s courage and resilience, the bridge that stands today is a living memorial to the city and its markets. 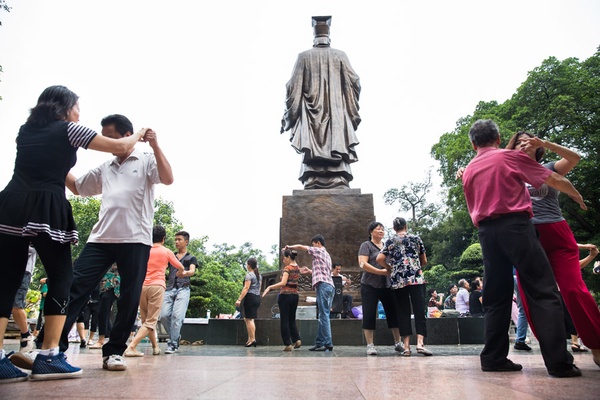 Dancing in the plaza.

A stone’s throw from the legendary Hotel Metropole is La Thai Plaza, a park where hundreds of Hanoi residents converge to dance every morning. The hundred-year-old hotel, with its elegant white columns and green shutters, harks back to a time where guests waltzed across its grand ballroom. Ballroom dancing is still all the rage today, and middle-aged professionals and retired grandmothers come to the park to waltz to music from Europop group Venga Boys.

Dancing not your thing? There’s also laughing yoga every morning here at 6 a.m. Visitors are welcome (no partner required).

By now, your stomach is rumbling. Time for a breakfast bowl of steaming pho, a noodle soup that has been referred to as “Vietnam’s contribution to human happiness.” Not far from Ly Thai To Plaza is Pho Thin Bo Ho (61 Dinh Tien Hoang St.). Another great option is the noodle shop on 49 Bat Dan Street in the Old Quarter. 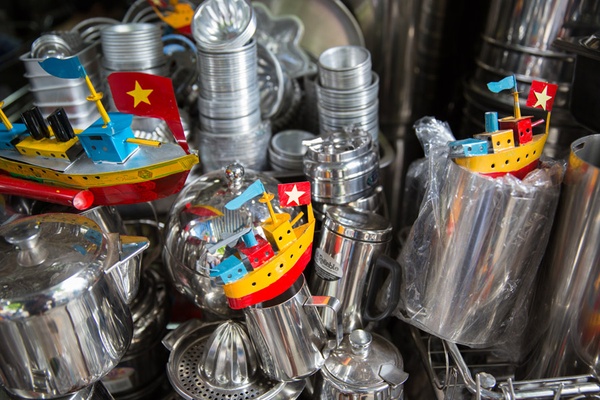 Goods from the tin smiths.

Hanoi’s history as a market dates back at least a thousand years. When Emperor Lý Thái Tổ made Hanoi the Imperial capital in 1010 A.D., hundreds of craftspeople from the surrounding villages began to establish workshops in what is now known as the Old Quarter of Hanoi. Each street is still known for a specific craft and linked to the village and guild it originated from.

While the Old Quarter is best explored without an agenda, some of our favorite streets include Hàng Thiếc Street, or Tinsmith Street, for colorful tin toys and coffee makers; Hang Quat Street for traditional wood carvings and stamp makers; Ma May Street for apothecary goods. Hang Trong Street is famous for handcrafted drums made from jack fruit wood and water buffalo hide.

When you’re tired of exploring the warren of shops, head to Hang Manh Street in the Old Quarter for a lunch of bun cha at Dac Kim. Bun cha is a Hanoi delicacy — grilled pork patties served over noodles with crushed peanuts, herbs, and a tangy dipping sauce. It's so famous, locals call this little side street joint Bun Cha Hang Manh.

After lunch, it’s probably time for some sweet and strong Vietnamese coffee. We loved spending a few hours by West Lake. West Lake is thought to have been formed from a part of the Red River and is full of legends (we love the one about a nine-tailed fox spirit and the Dragon Lord/King of Ancient Vietnam, Lạc Long Quân). Great storytelling can be heard from Mr. Nguyen Duy Binh, the owner of Café Nhac Xua. Here, you can sip your coffee as mellow sounds from old Vietnamese records play behind you and the world floats by on the lake in front. 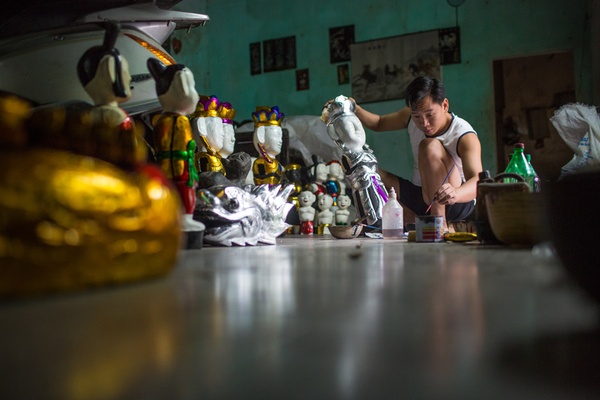 Thang Long Water Puppet Theater (57B Dinh Tien Hoang St., near Hoan Kiem Lake) is one of the last surviving traditional water puppet theaters in the country (they originated sometime in the 11th century in the Red River Delta). Most of these folkloric shows are accompanied by an orchestra of drums, gongs, and bamboo flutes.

See (and shop) more of Hanoi through the eyes of Project Bly.

Explore and shop more back streets in cities across the world.