You've had a crazy holiday and are getting back to the grind of the new year, wondering how and when you'll find peace and quiet. Here's an excellent, beautiful, and inexpensive option an hour outside Buenos Aires. Eco Yoga Park is a special place which multitasks as an ashram, an organic farm, and a volunteering haven for long-traveling backpackers.

GENERAL RODRÍGUEZ, Argentina – When I decided to spend some time volunteering in Argentina, I was thrilled to discover I could combine this adventure with one of my passions: yoga. I wasn't sure what to expect, although I tried to push my friends' Eat Pray Love predictions out of my mind. Instead I wondered: What kind of people would I meet? How would I handle the mostly vegan/organic food? Would I finally be able to touch the floor with my heels in downward-facing dog?

Having done enough internet research to reassure my parents that this was no sinister slave camp, I embarked on my journey, which I kicked off with a couple of days in bustling Buenos Aires.

To get to Eco Yoga Park, I had to decide between a car service or a bumpy bus ride, which promised Tetris-like efforts to fit my suitcase inside the crowded vehicle. I chose the car. And so, by 2 p.m. on Sunday afternoon, I found myself discussing Nietzsche in jumbled Castellan with Fernando, the spirited driver. Not an easy task after a raucous Buenos Aires night. I had no idea where I was, but I trusted Fernando's direction through the dirt roads, even as he ruminated on the tribulations of his third marriage and his eight children.

After an hour, I arrived. I was greeted by Ashley, a long-standing volunteer who had lived there for the past four months. With his guidance, I dropped my suitcase in one of the volunteer rooms. The room held a cozy bunk bed and was nestled inside a black wooden cottage. Ashley told me I would be helping to paint my new home in the following days as we began my tour of the Park. We walked through large organic vegetable gardens, followed by the kitchen and dinning area, outside of which sat a large hearth smoking with delicious breads that would soon be afternoon snacks. Finally, he showed me the temple: a fantastic, white, dome-like structure in which the Hare Krishna mothers and monks worshiped. 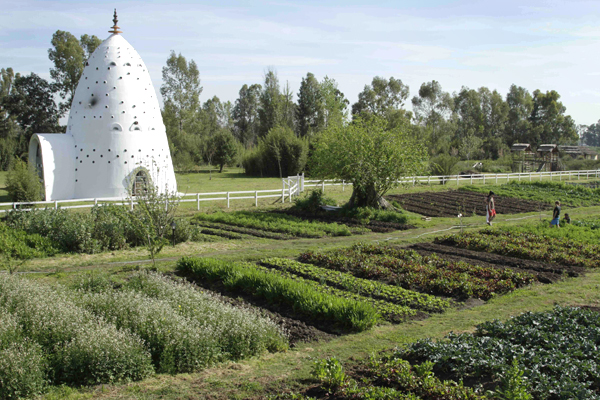 As we walked around, I noticed we were being followed by a small and heterogeneous pack of dogs. They ranged from Trixie, a miniature dashund who had followed her owner from Japan and whose natural habitat was people's laps, to Rocky, a docile German Shepherd who belonged to a neighboring farm but had, like all of us, found himself drawn to the irresistible peace of the Yoga Park.

Or not. Not that the Park wasn't peaceful. But if I was concerned about being bored, I worried needlessly. Over the next two weeks, I experienced the most interesting social interactions of my life. Maybe it was because the volunteers were as diverse as the dogs, hailing from all corners of the world. Or maybe it was because, as my new hippie friend Hanuman said, "you have to be a little crazy to come to an ashram."

Each day began with an early start. We had breakfast together and were assigned morning chores. The most coveted was working in the kitchen, which involved helping the mothers prepare lunch with produce that was mostly grown in the garden. Ironically, working in that garden was the most dreaded chore. Of course, this is where I found myself working most often, because the garden always needed at least one Spanish speaker to help Maria manage the volunteers. Maria hailed from Bolivia and was neither a monk nor a volunteer. In the three years she had been employed by the Park, she had learned how to say "what's up?" in English, but little more. And although there were few of us who did not tower over her, none of us could wield farm tools as efficiently. Whether it was learning how to prepare land or planting tomatoes, I enjoyed hearing Maria talk of her life and the details of the lives of the volunteers — as she assured me she was not one for chisme (gossip). Ashley kept trying to convince Maria that he was wanted in Japan for murder and was really only using the Park as a hideout.

On most days after lunch, volunteers were left to their own devices. This often resulted in afternoons spent playing with the dogs and having long conversations on the grass. On one occasion, I visited a neighboring farm to buy fresh dulce de leche and met the cow responsible for providing the main ingredient. 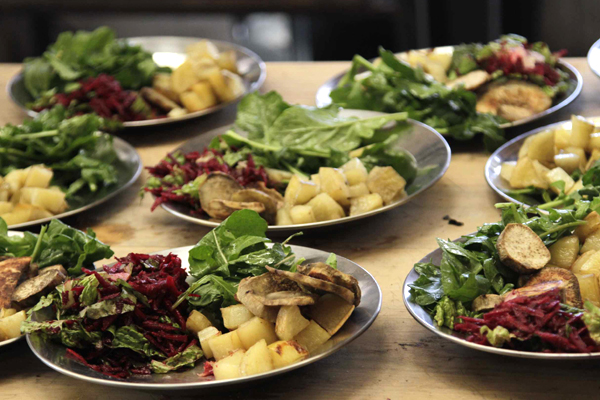 Late afternoons revolved around yoga and meditation in the temple, usually followed by a movie or documentary. Once we even had a quiz night, with coveted baked goods and chocolate for prizes.

My two weeks there felt both long and far too short. Long because we inhabited an unending present, disconnected from the outside world and without need for projections or worries. Short because my stay was just a fraction of what I would have liked, and much shorter than some of the other volunteers.

The true magic of Eco Yoga Park was that it became whatever you needed it to be, like a yogi version of Harry Potter's Room of Requirement. And as I learned their stories, I saw this was true for monks and volunteers alike. To many, this place was a safe haven in between tiring backpacking adventures through South America, a place to spend a week recovering with early nights, healthy food, and warm beds. For me, it was an off-the-beaten-track adventure, filled in equal parts with personal soul-searching and connecting with amazing people. But it could also be a sort of hospital or rehab, a perfect spot to spend a mid-life crisis, or just a place to get away from the outside world and live in the present for a little bit.

Eco Yoga Park
Rates for volunteer stays cost $18 per day for up to two weeks, $15 for longer. Get more info.