AUSTIN – I sort of dropped Top Chef a few seasons back. Well, we both decided it was time to go in our own directions. We're just friends now. Anyways, I really didn't know much about the latest TC winner, Paul Qui, until I interviewed him at last month's Austin Food & Wine Festival. He was late to our scheduled time, having missed his alarm before dashing to meet me, leaving a Pappy Van Winkle vapor in his wake. It had been a late night. 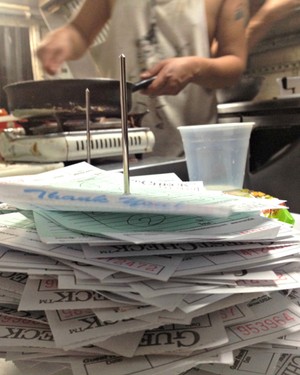 Fast forward fourteen hours, and I'm walking into the backyard of Liberty Bar on Austin's gritty Eastside. Everybody is very drunk (Tito's flows like water around those parts), having converged on the dive bar for cans of Pearl Snap German Pils and, more dramatically, to line up at Paul Qui's food cart for a plate of chicken karaage. I spot Gail Simmons and the bassist from White Denim as I take my spot in the queue. There are 20 people in front of me. It's 12:45 am. Everything smells so fucking good.

Well, we're shaking our heads at how smart this guy is. Having worked his way from the Austin Culinary Academy to the city's premier sushi bar Uchi to running the show at a successful spin off, Uchiko, Qui started the cart business with some fellow chefs because, well, he had invented a dish that he knew would drive the drunk crowd nuts: deep-fried roasted beets dusted with shichimi and dressed with kewpie mayo. 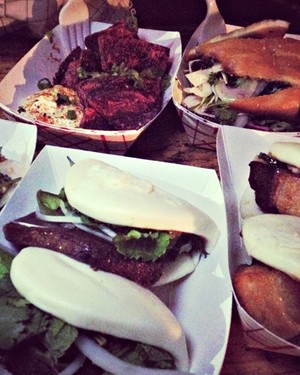 Nearly everybody in front of us had an order. In fact, so many people had ordered the fried beets that they were sold out by the time we got to the window. I had to go back the next day to try them. Damn straight I went back to East Side King. This isn't called a Like Letter.

Fast forward one week, and I'm sitting in my Brooklyn apartment still thinking about that beef tongue. I'm also thinking about catching up on Paul Qui's season of Top Chef. He just earned himself another fan.

Check out Fathom's Austin Guide for dive bars, vintage shopping, a 72-hour food tour, and so much more.