As far as Fathom founder Pavia Rosati is concerned, food doesn't get much better than Don Alfonso on the Amalfi Coast. This is her story of a love affair with food.

SANT' AGATA SUI DUE GOLFI, Italy – A few years ago, I flew to Italy to have dinner with a man who was trying to impress me. (It made sense at the time.) He was a handsome musician and sommelier from Tuscany, the sort of gourmet who thought nothing of driving five hours for the right glass of Franciacorta. He picked me up at the Rome airport and drove us to the Amalfi Coast to the place he decided was the ultimate pull-out-all-the-stops restaurant: Don Alfonso.

For all the times I had been to Italy (this was maybe trip #32), I had never been south of Rome. My family lives in the northeast, between Venice and Verona, and that's where I spend most of my time. But I like having places to discover in a destination I know so well. (Sicily, you're next.) That my first trip to the Amalfi Coast was happening in November, when all the tourists were back home, was only, I figured, very smart of me.

As it turned out, Don Alfonso was new for the Tuscan, too. It's located in Sant' Agata sui Due Golfi, the hill town named for the two impossibly picturesque gulfs it cradles: those of Naples and Salerno. Don Alfonso is best known as a restaurant — easily one of Italy's best — but it is also a Relais & Châteaux hotel, and we were staying the night.

Dinner lasted four hours and was exceptional, a dozen courses of exquisitely crafted dishes, each more creative and beautiful than the one before. As a rule, I don't care much for desserts, but when I was served impressionismo all' zabaglione, a confection of rum-laced zabaglione served in a cookie cup with cookie spoons, I was done. 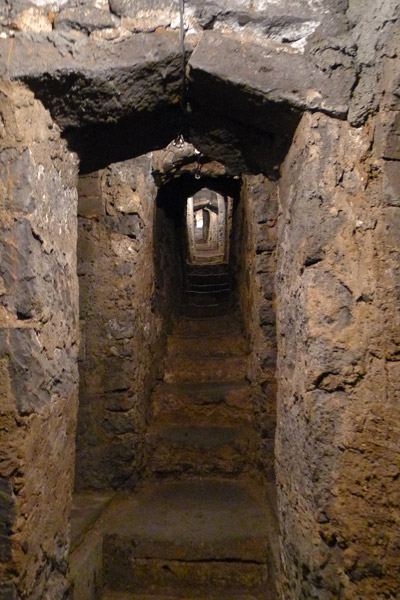 After dinner, we were invited on a tour of the wine cellar. Italians are by nature prone to exaggeration and melodrama. Especially Neapolitans. But I defy you to find me a wine cellar more mythic than this one.

It begins normally enough, with rooms for whites and reds, old and important bottles staged for maximum visual impact. (They give a lot of after-dinner tours.)

But then you hit the staircase, and the drama really begins. The staircase, I'm told, is an old Etruscan passageway carved from tufo, the rock that is the foundation of the Campania region. The stairs are smooth and strong, and I instantly imagine toga-clad proto-Italians carrying anfora filled with proto-falanghina thousands of years earlier. The deeper we descend, the more valuable the wines in Don Alfonso's impressive collection. There are 25,000 bottles down here, each carefully documented and wrapped in cellophane to protect the labels.

When we're about three floors underground (though who can tell?), we stop at the base of what used to be the well, which they now use to age their house-made cheeses and salumi. This is as far as they've excavated, though they suspect the passageway leads all the way down to the sea.

The person guiding our tour is Ernesto Iaccarino, the handsome son of the owners, Livia and Alfonso, and older brother to Mario, the maître d'. Ernesto is my age, and although he has a degree in economics and had embarked on a promising career at Price Waterhouse Coopers in Milan, he had recently chucked his life in finance to return to the Amalfi Coast to cook alongside his father.

Over chilled glasses of limoncello in the library after the tour, Ernesto asks us if we would like to visit Le Perraciole, the family's farm on the waterfront at Punta Campanella, in the morning before we leave, so we can see where they grow the produce that we had eaten earlier. Of course we say yes. At this point, I am drunk. On everything — on the wines, on the tunnel-digging Etruscans, on the thought of lemons and olives and tiny cherry tomatoes growing the shadow of Capri and Vesuvius, on Ernesto and his magic way with zabaglione.

That was the first of many, many visits to Don Alfonso, and in the years since I have developed a deep and loving friendship with the family. Over bottles of wine, visits to their farms, boat rides around the coastline, meals in their dining rooms, and aperitifs on the wisteria-covered porch, I have learned the restaurant's fabled history. When I returned to New York after that November visit, Ernesto and I embarked on a fevered email exchange — about family, food, and homeland. The following October, I returned with my parents, and that's when Ernesto took us to Lo Scoglio, another family-run restaurant on the Sorrentine Peninsula owned by his great friend, Guiseppe De Simone, who has since become one of my great friends, too. (I've written about Lo Scoglio before, and I'm a regular there as well.) I can't stop talking about both places, which embody, for me, perfection at the opposite extremes of Italian cooking: Don Alfonso for fine dining and Lo Scoglio for down-home.

Livia wasn't there on my first visit, but we met a few months later at a dinner she was hosting at the James Beard House in New York City, when I decided to make a good first impression by dumping a glass of Champagne all over her. "It's okay," she said, ever the perfect hostess, dipping her finger in the puddle and dabbing a few drops behind her ears. "I'm Neapolitan, and we're very superstitious. This must be good luck."

Livia and Alfonso were pioneers, two crazy kids with a big dream, whose influence on southern Italian cooking can't be overstated. "Farm-to-table" may be a cliché now, but it wasn't in the 1970s, when they were a young couple with the crazy idea that the food that grew in their backyard had more value than the stuff that came in a can. Don Alfonso has been in the Iaccarino family since 1890, but Alfonso and Livia wanted to challenge traditions and try something new: serving local cuisine to visitors. "Risotto with Champagne was what we served and what was expected," Livia told me, still incredulous at the memory. "On the Amalfi Coast! What about the beauty of our own Campania tomatoes?" 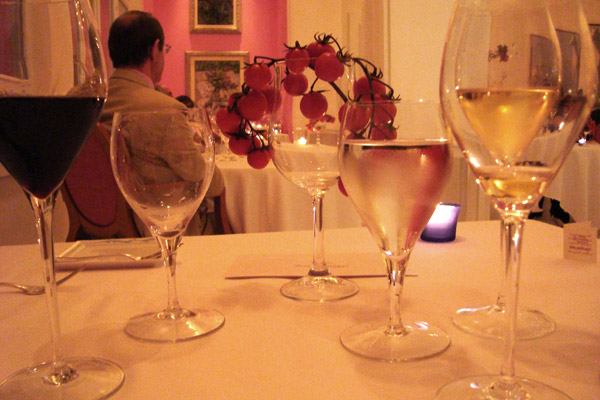 A composed first course of pastas.

As she tells it, young Livia and Alfonso used to sneak down into the kitchen after service to experiment with new dishes and recipes, carefully putting everything back where they had found it because "my mother-in-law would have killed me for messing with the kitchen." Alfonso is a masterful, inventive chef. Livia has impeccable, discerning taste. When they were ready, they presented their plan to their parents, who to their credit agreed to the changes. And the rest is history.

Many innovators who blaze a trail keep their eyes fixed on the future. But Alfonso and his chefs take a more interesting approach, working with history and with innovation — preserving and honoring culinary traditions and inventing new flavors, techniques, and presentation. Menu items are captioned with the year that a dish was "created" or "revisited."

Of course, you can just eat and not think too much about the consideration that went into the plate in front of you. My father doesn't care when a dish was invented. He just knows that theirs is the best damn fritto misto he's ever tasted. 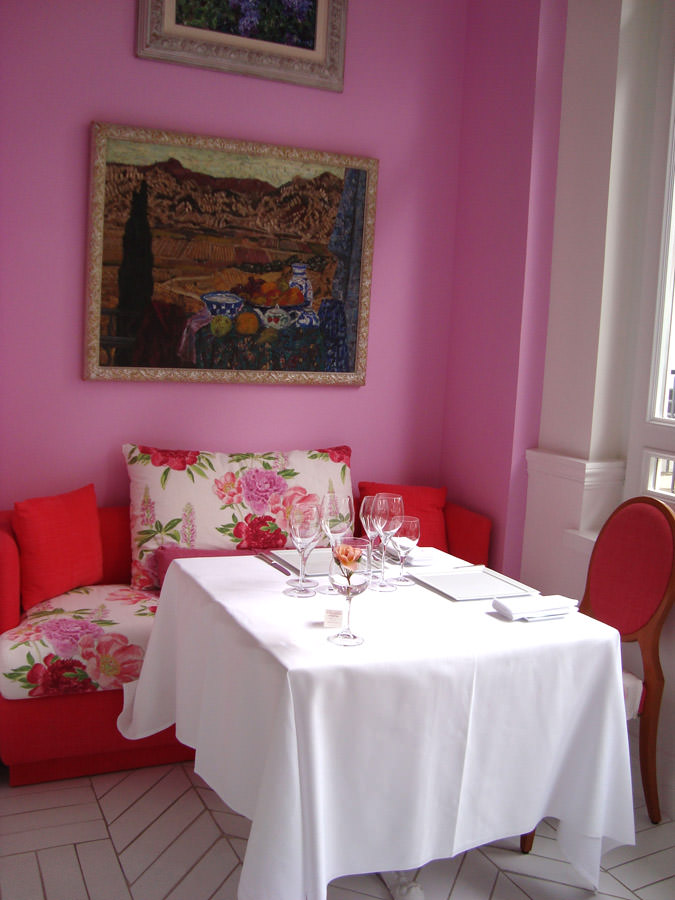 The food and the experience get better and better every time I visit. They have since renovated the dining room and the hotel rooms, filling them with vibrant textiles and colors. (That's my favorite corner table in the photo.) They converted a separate building on the property into a two-story, one-room suite called The House of the Poet. They built a swimming pool and a cooking school filled with copper pots and pretty green and blue tiles. They have glorious cookbooks. They sell their products: tomatoes, olive oil, pastas, and coloratura di alici, a magical anchovy sauce. When my friends honeymoon on the Amalfi Coast, dinner at Don Alfonso is my wedding gift to them.

There are Michelin stars and celebrity chef television appearances and Don Alfonso outposts in Rome, Macao, and Marrakech, with more, no doubt, on the way. (God knows I'm doing my bit to lure them to New York City.) But Don Alfonso in Sant' Agata is a self-contained gastronomic wonderland, the Platonic ideal of what a restaurant experience should be, a mix of refined and outrageously delicious food and generous, loving hospitality.

Back to the first night. And the poor Tuscan. Our journey would take us south to Ravello and north to Venice, but he didn't stand a chance. My heart was staying at Don Alfonso.

Easily one of the best and most creative dishes I've ever had here.

The soup is finished tableside.

They renovated the dining room a few years ago. It's white with pops of bright pinks, fuschias, and yellows. Flowers are everywhere, and you'll sometimes see tomatoes used as centerpieces.

In the kitchen: menus and orders.

Ernesto, at left, with a chef at the pass.

There's a window onto the kitchen from the dining room. This is what you might see.

Fried artichokes ready to be served on silver trays.

My favorite table in the dining room.

Pavia with Ernesto, who is explaining a fascinating detail about the pizza oven.

The old Etruscan passageway lined with thousands of bottles.

This is the bottom of the old well, which is now where cheese and salumi are aged.

This is what you get when you ask for scrambled eggs.

A view from the farm where they grow the produce they serve.

Another view from their farm at Punta Campanella.

Pavia and Livia at Lo Scoglio. (The baby is Livia's nephew.)

This is a great place to spend a sunny day.

This is also a great way to spend a sunny day.

Paccheri with leek, zucchini, and local cheese served in the garden.

The rooms at Don Alfonso are named for various herbs.

The dessert that made me fall in love with this restuarant.

A variation on the clasic caprese salad: basil, mozzarella, tomato.

Everything in the dining room is pretty, and no detail is overlooked.