This week, we're checking in with people who inspire us. Like Blue Hill chef Dan Barber, a global innovator in food sustainability and awareness. Fathom co-founder Pavia Rosati attended the opening night of wastED, his revolutionary pop-up restaurant open in London a few weeks ago. It was a meal to remember.

LONDON – Right now in London, an extraordinary thing is happening. One of the world's most celebrated chefs is serving meals made from garbage, and everyone is clamoring to eat it.

It's no exaggeration: wastED is the brainchild of Dan Barber, the chef and philosopher behind Blue Hill in New York City and Blue Hill at Stone Barns in the Hudson Valley. The idea is simple and brilliant — serve lunch, tea, and dinner made with ingredients that would have otherwise been tossed, to call attention to how much food we waste, often for no good reason.

The pop-up restaurant lauched on February 24 and will run through April 2. I was there on opening night, and the atmosphere was electric — not only because the guest chef of the day was Alain Ducasse, but because it felt like I was witnessing an important cultural moment. (I had the same reaction when I ate at the first wastED at Blue Hill two years ago.)

The clever menu includes dishes like Lettuce Butts with smoked salmon collar and salmon skin crumbs; Waste Rarebit with stale ale bread and cheese trimmings; and Juice Pulp Bacon Cheeseburger on a repurposed bread bun, an improbable (and shockingly accurate) meat substitute made with what's left over after fresh juice is pressed. Every dish costs £15, from the bread course served with whipped jamón drippings and whey ricotta to the cod head kedgeree with broken rice, which could feed a hungry army. The salad was an inspired riff on a Caesar, the cod was meltingly tender, and the burger really did taste like a fine burger.

The back of the menu includes an illustrated glossary of ingredients and dishes. "Broken rice" are "fractured rice grains, broken in the milling process." "Waste-fed pig" eats a "diet of whey, restaurant scraps, spent grain, and vegetables." "Mystery cheese" is "imperfect or off-type cheese deemed unsuitable for the market." If you think the descriptions sound really unappetizing, I would ask you why it matters, if the results taste so good.

The wine list includes three whites and three reds, and a category called "wastED Chances" that is literally a wild card. The sommelier comes to the table with a pack of playing cards. You pick a card, and they bring you the corresponding bottle from their collection of unsellable bottles. If you don't like it, they'll take it back and turn it into vermouth. In our case, we scored, first with a Chablis premier cru, then with a white from the hills outside Venice where my favorite cousins live.

The setting is as unlikely as the food: the rooftop at tony Selfridges department store on Oxford Street, overlooking central London. The decor, overseen by Barber's sister-in-law Laureen, in collaboration with innovative designers around the world, echos the ethos of the menu, with tables and chairs made from artichoke thistle (really!), lampshades from mushrooms and seaweed, and ceramics with tiny flaws that render them unsellable in the market. (When the pop-up ends in April, everything will be for sale. The tabletop items on the Blue Hill Market site, furnishing on a first-come basis. No waste!) 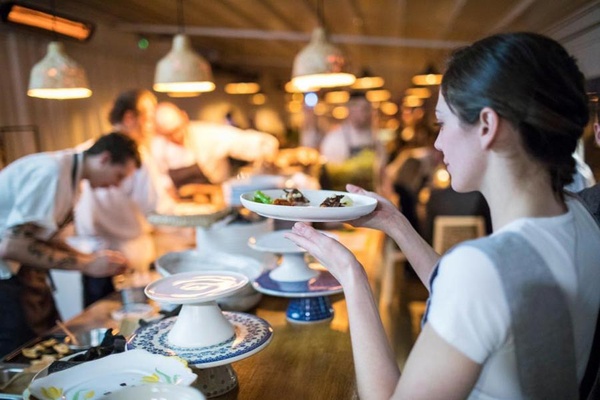 Service at wastED. Photo by Richard Boll / courtesy of wastED.

This is a meal with meaning, with purpose, with intention — a meal that stokes my liberal and moralistic tendencies. Americans waste 130 billion tons of food annually. Tons. On a global scale, things don't get any better. These are just horrifying statistics. Barber, whose scholarly attention to how we eat was brilliantly documented in his book The Third Plate, spent a year researching the UK food systems to identify the points of waste, and is working with local producers and farmers to put their ingredients to innovative use.

There is, however, nothing preachy or guilt-inducing about wastED. Yes, it's good for you and good for the world. Yes, it's a study in sustainability and awareness. Perhaps it's even an act of culinary activism.

But above all, wastED is an exercise in deliciousness. And ultimately, that's what Barber — and, let's face it, his diners — care about. My English husband, who has spent a lifetime eating British club fare, deemed Barber's version the best Welsh rarebit he'd ever had.

When I interviewed Barber for the podcast Prince Street, he told me that chefs have always been efficient about their use of ingredients. Coq au vin was a way to use a spent rooster. Bouillabaise is a way to consume fish scraps. Barber himself designs the specials at Blue Hill in consideration of what's left over from the day before. When I asked him if wastED was his Shake Shack, an idea to spin off globally, he demurred, in his typically modest style. "I'm interested in how these ideas become mainstream, so we stop thinking of this food as waste, so that the ideas we're promoting become how people cook at home."