Traveler Caroline Goggin leads us on a scenic journey through one of Portugal's small beach towns, the pictueresque Cascais, an easy day trip from Lisbon.

CASCAIS, Portugal – The first time I visited Cascais was for the wedding of a Spanish friend I met while studying abroad. Prior to the trip, all I knew about Cascais was that it was a "nice beach town" near Lisbon where the two of them had officially become a couple.

When I arrived, it was easy to see why one would want to return to such a special place. As someone who grew up in Maine, the ultimate New England summer destination (the state tagline: The Way Life Should Be), I'm a firm believer that summer months are not to be spent in cities. If I lived in Lisbon, I would escape to Cascais every chance I got.

Cascais is a small, upscale beach town brimming with shops and cafes, just 30 minutes from Lisbon. The locals say Lisbon is for doing things, but Cascais is for living and relaxing. Although the coastal town is certainly slower paced, there are still plenty of things to do and explore in a few short days: wander the narrow historic streets, stop into boutiques, or take a bike ride along the coast.

Downtown shops and plazas are clustered around one central beach and a small harbor of fishing boats. Stone buildings, palm trees, and tiled walkways spill out from the harbor. Shops and cafes line pedestrian streets and can also be discovered in the maze of narrow, historic lanes. Just a five- to ten-minute walk outside the center, the streets widen into shady, tree-lined residential roads with hidden estates and gardens. 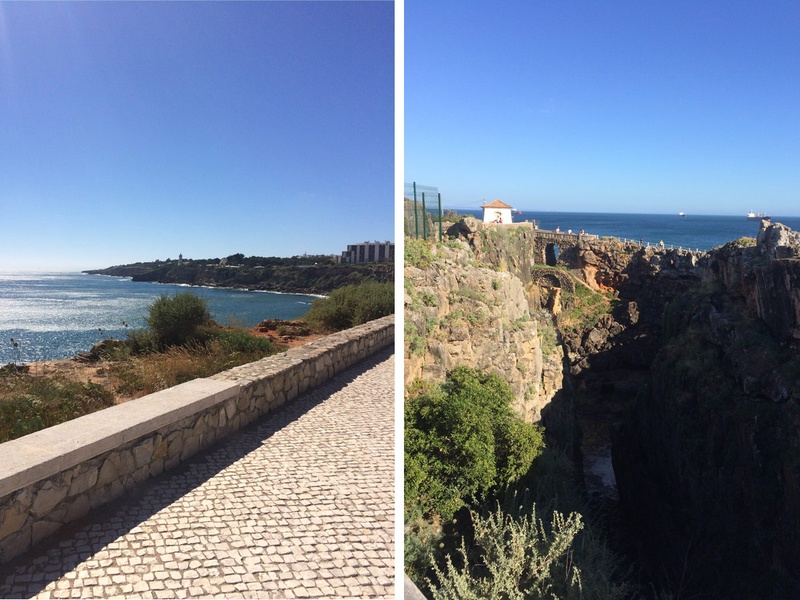 Views from the bike ride to Guincho beach.

Take a bike ride along the gorgeous, rugged coastline to Praia do Guincho, a secluded beach beloved by windsurfers and kiteboarders for the strong winds and crashing surf. A bike path runs from Cascais all the way to Guincho, seven kilometers up the coast (which takes about 45-minutes without stops).

There are several scenic stopping points along the way, including Boca do Inferno (the 'devil's mouth') — a chasm in the seaside cliffs right outside town. The ride, which can be gusty at times, is invigorating and offers incredible views better appreciated in the fresh air than from a car.

Once at the beach, take a stroll on the sand or enjoy a refreshing drink at Bar do Guincho while taking in the view. For the adventurous, there is a school located on the beach for surfing, kitesurfing, and windsurfing lessons.

Free bicycles are available downtown or for rent from shops in the marina. 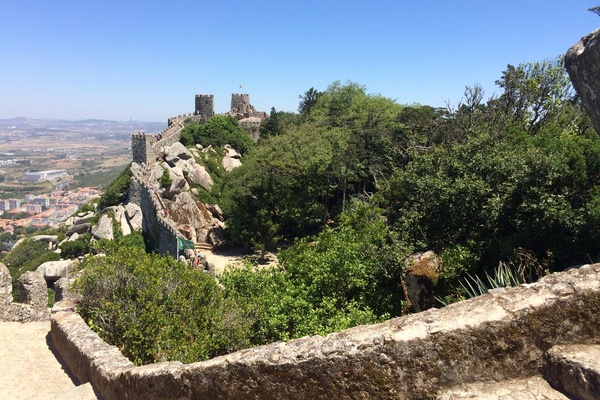 View of the Castle of the Moors. 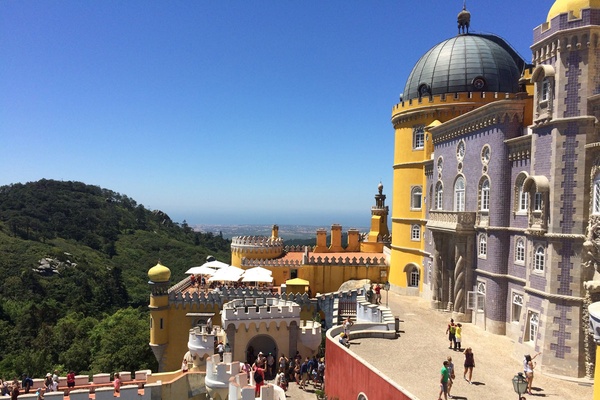 Wander the Shops
Cascais is the perfect place for doing nothing. Simply wander the streets, peruse little shops, or sit on a bench looking out onto the fishing boats bobbing in the harbor.

See the Coastline from Sea
If you're interested in taking an afternoon boat ride, there's no need to book through a tourist agency. Just wander down to the docks and begin asking around; you're sure to find a captain who is willing to take you out for a few hours so you can admire the seaside cliffs and take a quick swim. My friends and I ended up on a powerboat that comfortably fit ten people, went out for two to three hours, and were provided with complimentary wine, beer, and snacks for the entire afternoon (€250).

Swim by Farol de Santa Marta
As you follow the coast westward out of town (in the same direction as the bike path to Guincho), you'll cross a small footbridge. To your left is the lighthouse Farol de Santa Marta; below is a calm, shallow inlet of water perfect for taking a dip in seclusion.

Enjoy a Sunset Cocktail Overlooking the Harbor
The sunsets in Cascais are stunning, and the rooftop of Hotel Baia offers a perfect place to sip on a cocktail while watching the day dip slowly into night.

Take a Day Trip to Sintra
Sintra is an easy day trip from either Cascais or Lisbon. In the mountains high above the village are a cluster of castles, the gem of which is the vividly colored Pálacio Nacional da Pena. Adjacent to the Pena Palace is the Moorish Castle (2710 Sintra; +351-21-923-7300), ruins surrounded by natural gardens in a beautiful state of disrepair. It is truly a hike to get up to the castles, so wear comfortable shoes. Sintra has its own microclimate that can bring a chilly fog, so bring a light jacket as well. You'll want to spend at least a half-day exploring here — go early in the day to beat the heat and crowds. Pro tip to make your Instagram pics pop: choose an outfit with bold patterns to compliment the geometric arches and intricate tiled walls you're sure to pose in front of.

Try the Ginjinha
Ginjinha (ginja) is a sour cherry liqueur, made from morello cherries, sugar and sometimes cinnamon. It is a traditional Portuguese liqueur and is easily found in dozens of bars and cafes. Ask for your shot with ('com') or without ('sem') cherries in the bottom of the glass. Sometimes you will find it served in a chocolate cup, which is a bit touristy but also delicious, so who's to complain? 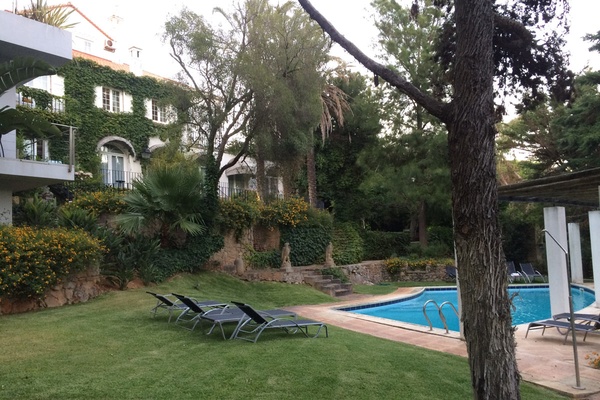 Casa Vela Guest House
This bed and breakfast is a little oasis in what is already a beautiful town. From the moment I stepped through the front gate and for the entire duration of my stay, I felt as though I was truly being welcomed into another's home. The property is made up of the 'old house' and the 'new house' (of modern design). Each of the fifteen suites are uniquely decorated and named for Portuguese discoveries and the spice trade. The breakfast terrace overlooks tiers of gardens and stone stairways that lead down to a sprawling pool and portico. Even at full capacity of 40 guests, it feels like your own private, relaxing residence. (€85-€115 and up, depending on the season).

Pestana Cidadela Cascais
For the luxury traveler, this hotel is located in a historic fort just a five or ten minutes from the harbor. Jetlagged guests will find a chill experience in the spa or indoor pool, which is covered by a skylight and flanked by glass doors that open up to a deck overlooking the marina. The hotel has an outdoor pool, set back in a grassy garden at the top of the fort that overlooks the sea. Every day here starts with a beautiful view, as the complimentary breakfast buffet is served in a spacious dining room overlooking the marina (€200 and up, depending on season).

More budget-conscious travelers can find a small selection of Airbnbs and hostels around town.

There are dozens of casual bars and cafes serving typical Portuguese dishes, but O Cantinho da Belinha (Av. Vasco da Gama 133; +351-21-482-2504) is a local favorite. The restaurant is hidden away from tourists and can be easily missed if not for the colorful flags strung across the garden patio. It doesn't look like much at first glance, but has a welcoming, rustic atmosphere and selection of freshly caught fish and traditional dishes at a fair price.

Unexpectedly, one of the best meals we enjoyed in Cascais was at Masala (R. Frederico Arouca 288; +351-21-486-5334), an Indian restaurant on one of the main downtown streets. Maybe it was because we arrived both ravenous and a little tipsy, but it was truly one of the best Indian meals I've had anywhere outside India. The food was delicious, the service was outstanding (they kept the kitchen open late to accommodate us, and brought out blankets when they noticed a chill), and the naan portions were plentiful.

Portugal remains one of the most affordable European countries, and flights to and from Lisbon are noticeably less expensive than other cities like Paris and Rome. Lisbon is serviced by several international airlines, making it an easy stop if your itinerary includes multiple European destinations.

Cascais is 30 minutes outside Lisbon by car (an Uber costs approximately €20-30) or train. Trains (approximately €2.15 per person) from Lisbon depart from Cais du Sodre train station every twenty minutes and follow the scenic coastline, stopping in little beach towns along the way. Sit on the left side of the train for the best views. Once you arrive in Cascais, the bustling downtown streets are just steps outside the station.

Once in Cascais, it's best to explore the small town on foot. I was pleasantly surprised to discover that Portugal has UberX, which is easily utilized if you are inclined to do a day trip to Sintra but don't have a rental car.

The summer days are sunny and hot, with temperatures easily topping the 90s. But the ocean winds can make the nights quite chilly, so remember to pack a light sweater or jacket for leisurely after-dinner strolls.

Seafood Dreams: A Chef's Tour of LIsbon and Porto
Architecture Tour in Portugal
Navigating the Cliffs of Sagres, Portugal