Burning Man is back. Are you ready? Veteran Burner Deborah Schoeneman shares her essential information. It took years of experience to master it all.

BURNING MAN, Nevada – So you're going to Burning Man for the first time?

I hope you got a ticket. If you didn't, you may have to shell out major cash to get one off Craigslist — if you're lucky. And that's not where the money drain will end.

I first started going to Burning Man in 1999 and I've been nine times. (I think.) It started as a cool festival in the desert where my architect friends from college built art projects. Now it's where my rich friends party. The evolution of Burning Man has coincided with my getting older and increasingly preferring creature comforts, so I'm not complaining. I could go on and on why I love it, but this is just a survival guide, so I'll rein it in. 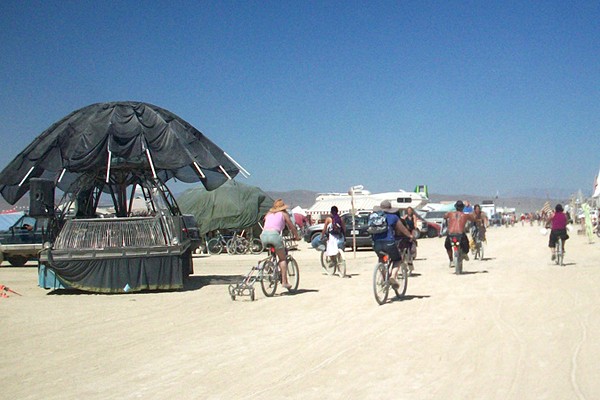 First of all, read the official first timer's guide on the Burning Man web site.

Find anyone you know who is connected to a big, established theme camp and try to get in. These people don't have to be your best friends, but you want to camp with them because they have figured out things like outdoor showers, bathrooms, and massive shade structures — and they will likely have power that you can use. Ideally, you'll go with friends and make your own sub-camp. You will have to pay in cash and some kind of chore to be a part of a theme camp. Do it. Or else it is a lot more work and expense. Also, the theme camps have the best real estate and your friends will be able to find you if you tell them in advance where you're camping because the big camps are on the official map.

Big camps are filled with veterans who will be nice and helpful. They will also solve the food and water issue with a camp meal plan and communal kitchen. This will help you avoid the trap of bringing shitty food like mac 'n 'cheese in a box and Ramen that you don't want. Coconut water is like a heavenly nectar there, so bring a ton. And don't be an idiot and forget water if you're camping solo, which I strongly don't recommend, in case you haven't figured that out by now.

Limit your booze intake. One shot of tequila or one glass of wine go a long way, and alcohol totally dehydrates you. If you're going to do drugs, at least wait until you have acclimatized and know your way around. Moderation really is the best option. 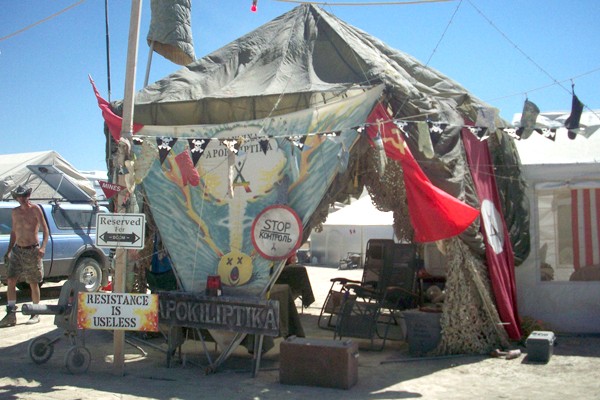 I've camped in a tent, an Airstream, and an RV. If you can afford it, get an RV. You will be very happy to have your own bathroom, kitchen, bed, and air conditioning. If you can't, at least rent a minivan with removable seats. You can sleep in it — and keep your stuff relatively dust-free. If you're broke, bring a tent, a tarp, and an air mattress, which is a must because the ground is hard and dusty. It's brutally hot during the day and freezing at night, so come prepared for both extremes.

Burning Man is supposed to be commerce-free, but it's really not. Bring cash and a ton of shit.

The first timer's guide lists the basics, but the most important things are a bike, a Camelbak, a headlamp, and glow-in-the-dark bracelets and necklaces that come with fasteners so you can attach them to your stuff so you can find them at night. Tons of baby wipes. Ambien or some other sleeping pill, earplugs, and salty food like almonds and jerky. (The salt helps you retain water and avoid dehydration.) The things you will want to eat are salty meats and fish, dried fruit, fresh fruit, and tons of juice.

You can't have too much lip balm.

Goggles to block out the dust. Army Navy stores are good for this. Get cheap ones and bring at least two pairs. Ditto for sunglasses. You will lose them. Bring a bandana or disposable dust masks from a hardware store. Dust storms are totally fine, just stop wherever you are, duck into a yurt or teepee, take it easy, make new friends, and don't panic. The only thing you don't want to do is fight it and try to get home.

There's a medical tent so you don't need to go crazy bringing first-aid stuff, but definitely pack Band-Aids, Advil, and saline spray for a dry nose because that's gross to share.

Do not bring any shoes that will give you blisters!

Bring some classy stuff, too. Bottles of rosé and kombucha, dark chocolate, smoked salmon. You will make way more friends with that stuff than with furry neon toys.

Pretty much everything you bring will get ruined, so don't bring anything fancy except for a decent camera with a ziplock bag to keep it in.

Costumes really depend on your style. My advice is to bring a bunch of accessories like medallions, hats, sunglasses, and sarongs. Jumpsuits and fur coats are great, too. It's not about dressing up as, say a witch. It's about looking like a cool robot or gypsy. Keep your feet covered as much as possible to avoid crazy dry cracked toes. Don't buy a ton of stuff at American Apparel (metallic bikinis, etc.) because every newbie does that. (Shout-out to the couple in the photo at left.)

6. When to Go and When to Leave

Arrive early and depart early and stay for a least three nights. It's so much effort to get there, so you'll want to settle in. Burning Man is mellow and great early in the week. I like to go from Monday to Friday. If you go early, you can watch the art installations and theme camps get built. The dance parties are smaller and the crowd is older. By Thursday it's amateur hour, full of raver kids on drugs waving glow sticks.

Book a nice hotel room at Peppermill Resort in Reno for a night en route home. You will want a very long shower and room service. They have rooms with Jacuzzis. Spring for it and book it now because they fill up. Nothing is worse than driving around Reno desperate for lodging. Maybe you'll even find a new special friend to share it with you. This is part of the Burning Man magic. 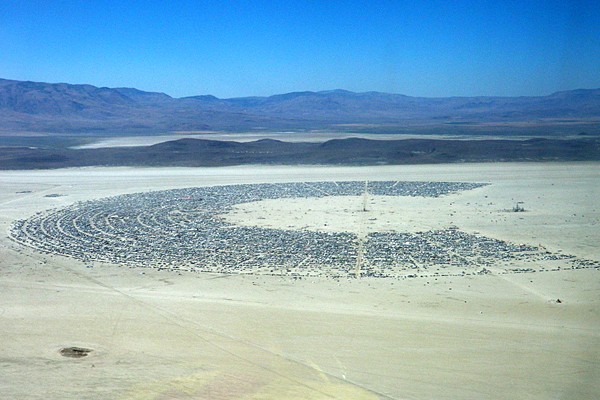 An aerial view of the playa. Photo: papertygre / Flickr

8. How to Get Your Bearings

As soon as you arrive, study the city map! And always carry it with you in your camelbak (where you should also stash a headlamp, extra batteries, tissues, baby wipes, salty food, lip balm, and something to barter for cocktails or whatever else you may want). There are port-a-potties all over the playa, but they get gross as the night progresses and they always run out of toilet paper.

Take in the landmarks to figure out where you are camped. It's a big city and you can get lost, especially if you are on drugs. Always park your bike by a very easy-to-find, grounded landmark and not by something that will move, like an art car.

There is no cell reception on the playa and this is a good thing. Do not get any kind of walkie-talkie to keep track of friends. Only losers do this. It's much more fun to give into the phone- and watch-free existence and get lost and found. Some tech nerds have wifi, which you can find if you must, but don't. There are satellite phones around for emergencies.

10. The Truth about Theft

I have a theory that things don't get stolen at Burning Man by thieves. They just get misplaced by people on drugs or taken in desperation by people on drugs who really need a bike to get home or can't remember what their Camelbak looks like. It's dorky to tag your stuff with your name. Decorate it with fabric, fake flowers, glowsticks, colored string-anything to distinguish it, and you should be fine.

A bonus of Burning Man is you will probably lose five pounds if you stay for a few days. It's secretly fat camp with tons of biking, walking, and dancing. Plus, it's so hot you're not that into food. Bring some skimpy clothes you're on the fence about. You will look great them it by the end of the week.

No matter how fun it looks, avoid climbing up towers or gravity-defying stuff because they tend to break and people get hurt every year doing this. 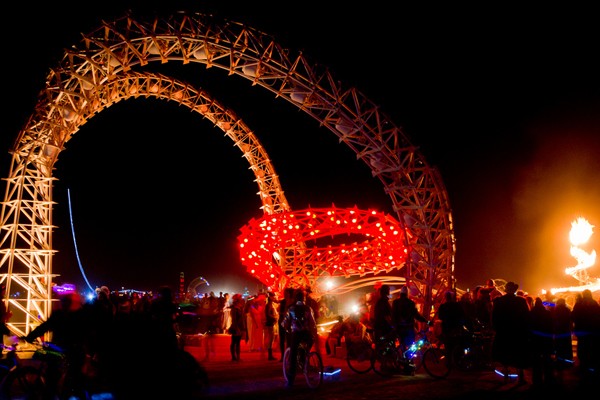 The big burn is Saturday night. If you've never been, it's worth seeing-sort of. It's kind of like being in Times Square for New Year's Eve. It's also hellish to depart Burning Man anytime on Sunday. You will wait in traffic forever and, to make matters worse, you will be exhausted and probably coming down off drugs. Nightmare. (Print out your directions cause cell reception cuts out on the way from Reno to Burning Man.)

If you're intent on staying for the burn, be a player and fly into the playa. You can book a seat on a small prop plane from Reno or San Francisco right into Burning Man. This is by far the best way to go if you can convince or pay someone else to bring your stuff. Advantage has planes going into the playa. Rates start at $389 per person, one-way. If this is not an option, stay for the temple burn Sunday night and leave Monday morning. Avoid leaving in a car on Saturday. That's a total amateur move.

And above all, have a great time.

A Mirage Burns in the Desert
Scenes from Burning Man