Rain, cold, distance: None of these matter when the prize is an unforgettable sandwich. Street food-obsessed Fathom intern Boris Ebzeev recounts his journey for a cheap bite in Buenos Aires.

BUENOS AIRES, Argentina – During the cold months, it's tough to wrangle out of bed, make breakfast, and go about the day. Especially when you're alone in Argentina. But in a country whose reputation for delicious meats transcends national boundaries, you'll be a fool not to run miles for a good asada. And that's just what I did.

For the second year in a row, I left the sweltering New York summer and flew to Buenos Aires. I arrived with a vague grasp of the Spanish language and a shallow tourist itinerary, which took only a week to drain completely. I was staying for a month, so, from then on, I improvised.

I nabbed a cheap, beautiful AirBnB rental in Parque Patricios, a somewhat rough, south-city neighborhood. The year before, I lived in Palermo and would duck into a variety of posh neighborhood cafés on rainy days to write. I was comfortable in my new digs this year, but with it came the challenge: Where do I eat when I'm too lazy to cook? 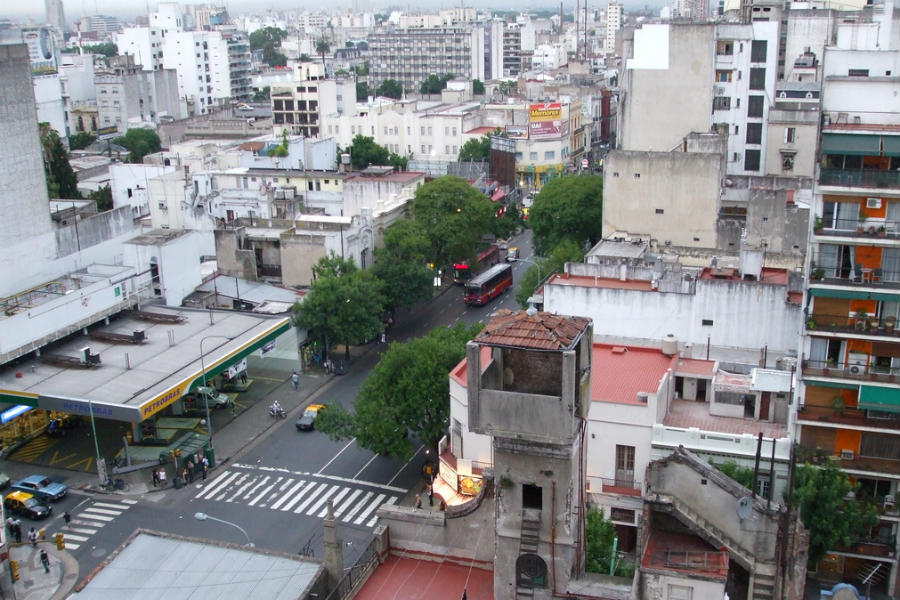 A view of Av. Entre Ríos, just a short walk from where I lived. Photo: Patricio Molina / Flickr

My stomach is stubborn. I can't convince myself to try new food once I've got firm favorites. I was hungry one morning, and the taste of a particular sandwich I had eaten the year before at a food stand in Puerto Madero was still lingering on my tongue.

This was no ordinary sandwich. It was stuffed with handsomely charred flank steak, topped with a fried egg and ham, and nestled within a fat baguette generously smeared with chimichurri salsa and a multitude of toppings. (Let's pause while you re-read that.)

Reserva Ecológica, a lush man-made nature preserve near the stand, doubled as my favorite place for a solitary picnic. I couldn't imagine anything else I needed more in my life.

But getting to the sandwich wouldn't be easy. It was cold in Argentina. People huddled in their jackets, and trees ditched their colors for the winter. Buses and trains were rare in my part of town, and none went to the colorful food trailers in Puerto Madero.

A week earlier, I had promised myself I would take morning runs in Buenos Aires to maintain tip-top traveling shape. Ha. I hadn't taken any. But a greasy, delightful meal seemed like an appropriate reward for an hour-long jog, so I laced up my running shoes.

I plotted my route on a street map, circled my final destination, and hit the pavement. I sprinted through the muddy park near my apartment, dodging dogs, Frisbees, and soccer balls before reaching the Avenida Brasil footbridge. 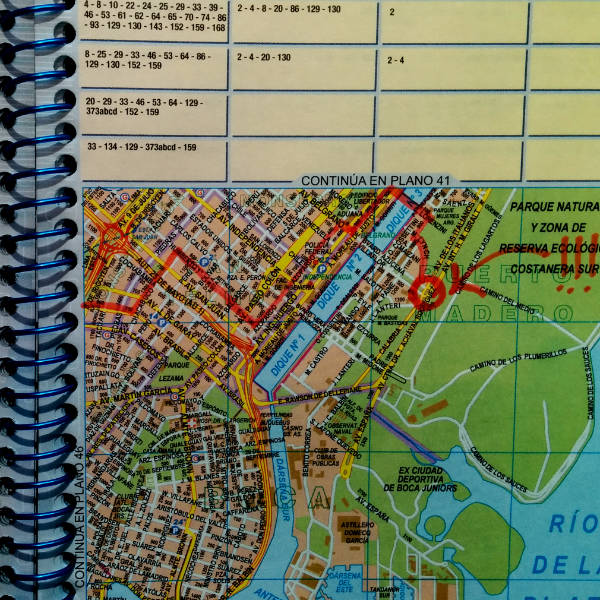 My trusty (but confusing) Guia-T bus and street map.

Finally, I glimpsed the piercing, sparkling condominiums of Puerto Madero. The neighborhood has some of the city's freshest developments and is situated on a thin strip of land hugging the waterfront, separated from the bulk of Buenos Aires by a canal. It's connected to the mainland by a smooth, harp-like bridge designed by Spanish architect Santiago Calatrava. 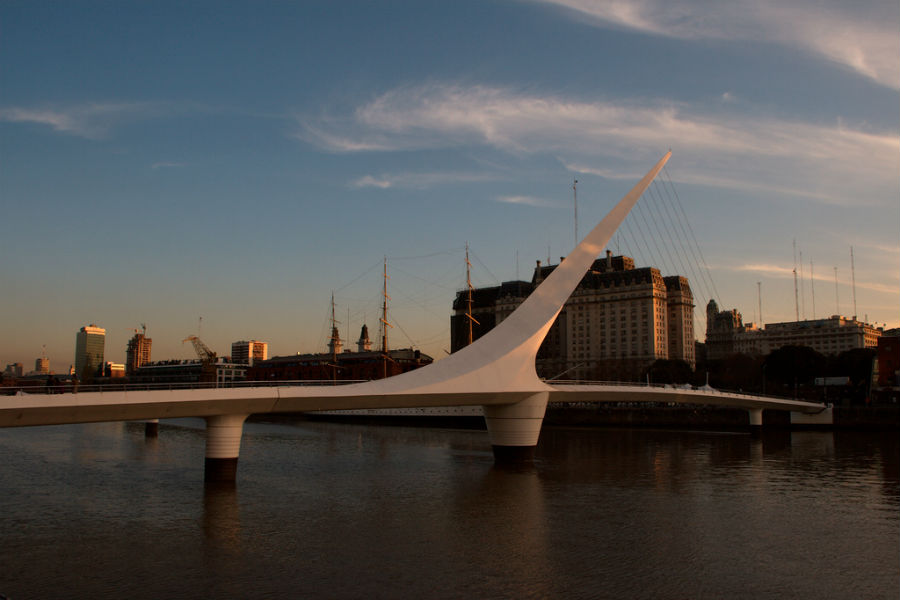 In a shabby track suit, I was the most obvious eyesore on the block. I ran past wineries, boutiques, and even a Starbucks before the savory aroma from the promenade nearly knocked me over. 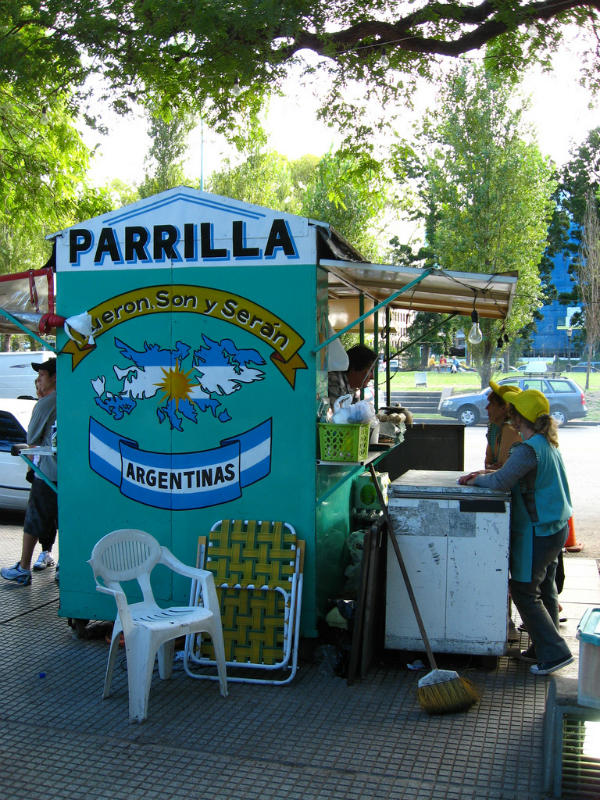 The modest trailers were parked a short walk from one another. They had nearly identical hand-painted color schemes, except for one food cart with a design that proudly reiterated Argentina's claim to the Falkland Islands. Most had endearing names like Parrilla Mi Sueño, and every smoky stand glowed with a comforting, lunch-at-granny's kind of vibe.

I've sampled several parrillas, or grills, on the promenade before, and was now approaching my favorite one. Que Parrillón is the largest of the bunch, located at the end of Calle Azucena Villaflor.

The blackened grill was crowded with bondiolas (pork shoulders) and chorizos (sausages) of all sizes. The grill master gave each hunk of meat the precise care it deserved. 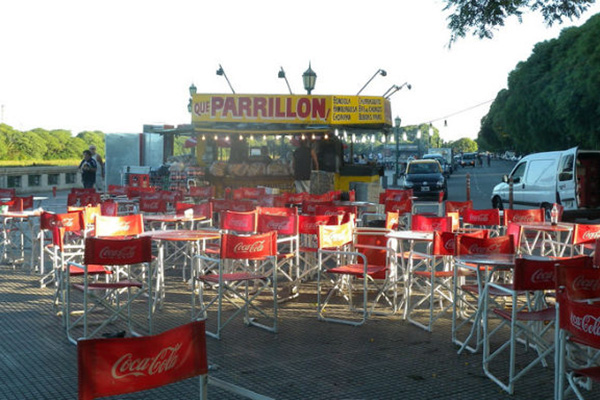 I got in line, paid 18 pesos for a lomito (which becomes a lomito completa, with egg and ham, for a little extra), and waited while the sandwich was slapped together. I was handed the finished product on an insubstantial piece of cardboard that's supposed to resemble a plate. If you can turn a blind eye to the meal's regrettable presentation, and forgive their classic street food-approach to hygiene, these grilled treasures will make a lasting impression on you, too.

The weather cleared up, so I made my way into the Reserva Ecológica to eat. The place is a total oasis. 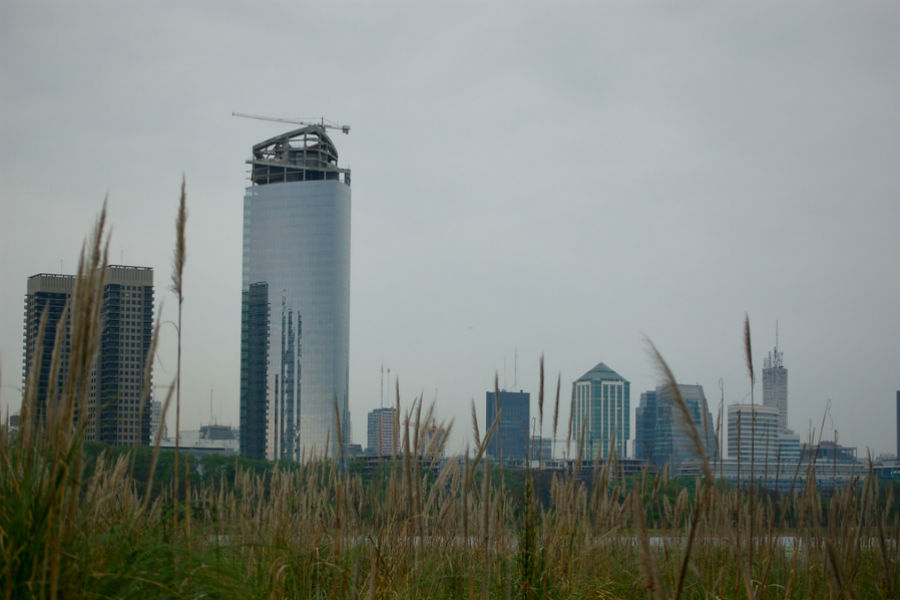 There were picnickers, cyclists, birdwatchers, and swimmers tiptoeing by the water on softened beads of sea glass and old brick the government used as beach filler. I scarfed down my beloved lomito and dried my rain-soaked tracksuit in the sun. 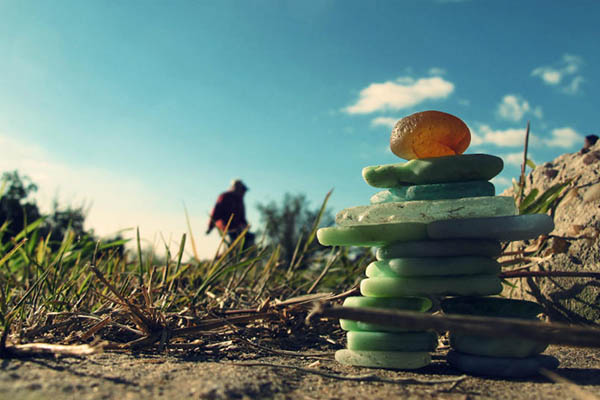 I even assembled a little sea glass pal to keep me company.

Where to Learn, Shop, and Dance the Tango in Buenos Aires
Local Obsessions: Drinking Mate in Argentina
Eating and Drinking My Way Through Cartagena