It's a thrilling thing, coming face to face with your first leopard. Nina Kokotas Hahn ponders the great circle of life in the Okavango Delta.

OKAVANGO DELTA, Botswana – Waking up on safari in Botswana is something magical. First come the steady calls of the African mourning dove, which overpower the rest of the bush choir. Then the rustling trees on the other side of the canvas walls (What could that be?), only occasionally audible over the whirring ceiling fan. Morning light slowly spills across the room, just before the bush equivalent of an alarm clock: French-press coffee delivered by the cheery camp staff and served on a tray dressed in white linens.

I am on safari in the Okavango Delta, the 6,500-square-mile-plus inland delta formed by the outpouring of the Okavango River. Set on its own island within the massive, waterlogged savannah, our camp — Sanctuary Chief's Camp — is further tucked into the Moremi Game Reserve on the Mombo Concession, one of the most wildlife-rich areas in Africa. Because this is the only protected area within the delta, wildlife comes here in droves. It's not uncommon for safari drivers to venture off-path to pursue "big five" game (rhino, Cape buffalo, elephants, leopards, and lions) — something that is not allowed in Africa's national parks. This off-roading basically pans out to unparalleled game viewing.

A pride of lions had been spotted nearby, and we plan to go in search of it. After a big breakfast of scrambled eggs, gooey passion fruit, and croissants, I join some other guests on an open-air 4x4 and we set off across the Okavango with our driver, Sky.

Born in the small village of Etosha along the Okavango River, Sky operates with a sort of sixth sense, zigzagging with purpose across the landscape. Every so often, he cuts the engine
to listen or to take a closer look at the path. 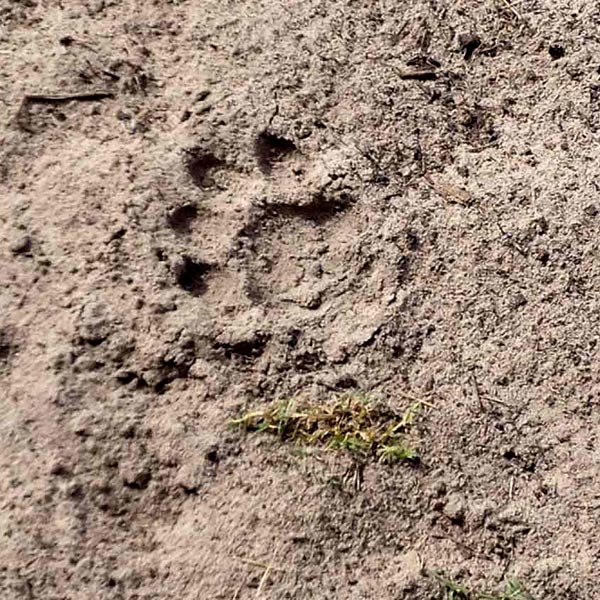 "There," he says, pointing to one suddenly distinct paw print in the dirt. "That is from a male lion, a big boy." He turns the engine, and we are in pursuit again.

The sun rises higher in the sky, and we know we are running against the clock. The lions will soon be looking for shade. Most of our group has grown quiet, perhaps beginning to accept the idea that we might not, in fact, see lions. But I am enjoying the work of tracking and scanning, of being present and trying to listen with my whole body, as Sky appears to do. Something about it reminds me of marathon running, of the all-encompassing commitment it requires to finish and get the big payoff.

Suddenly, Sky races toward the remains of a kill, so fresh it has not yet attracted the vultures and hyenas. Judging from the lower legs and hooves — all that is left — it appears to be an impala. ("Only a snack for these big guys," according to Sky.) The grass around it is unbelievably immaculate, as if it's been licked clean.

A call on Sky's radio announces a location, and we dart off. The pride is close. No one says a word as our vehicle quietly edges into a canopy of trees, under which several female lions are lazing. Some are panting with drowsy eyes, others are already asleep on their sides. No male is in sight. Sky explains that they typically keep their distance: Their job is to protect the pride. 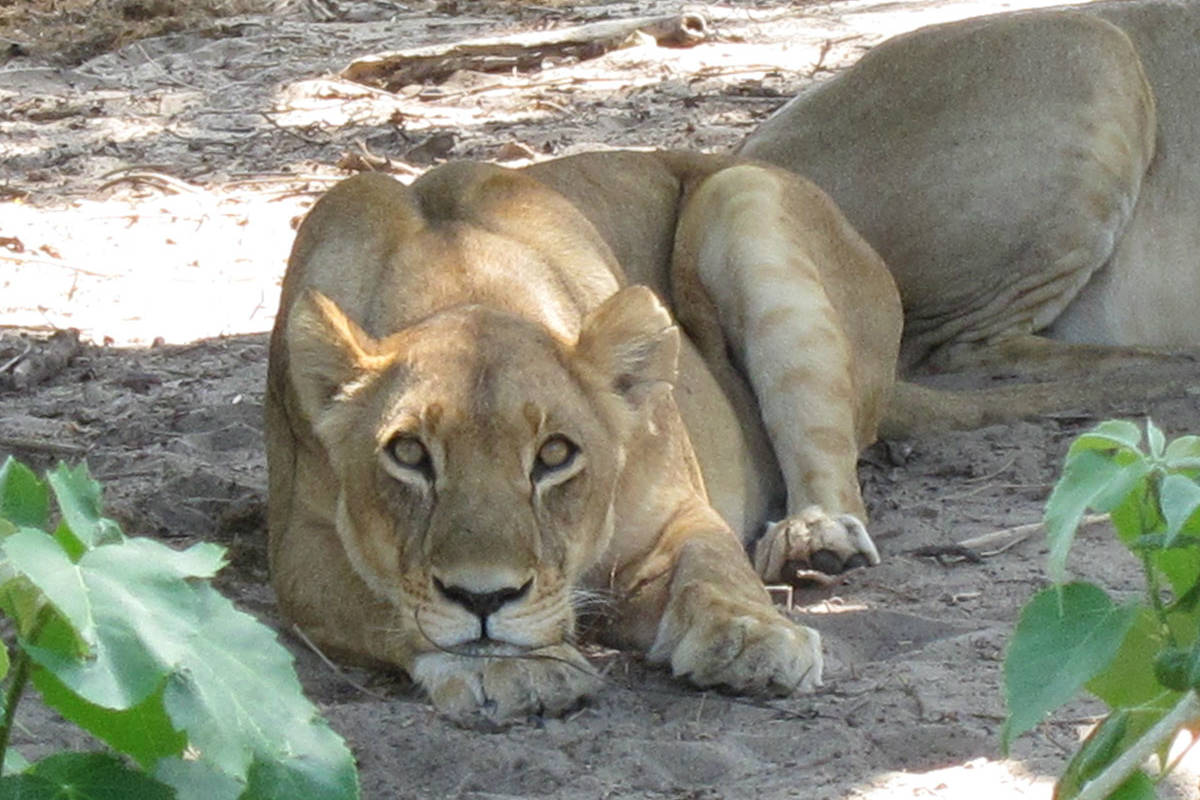 As if coming out of the woodwork, the faces of a few older but still timid cubs begin to appear from behind the leafy bushes. They watch us with more curiosity than the adults, who yawn and doze off. One of the females gets up and heads into the forest in the background, a cub trotting alongside her. Sky whispers that she is thin compared to the other lionesses and had probably not had much to eat today. ("See her belly?" he asks.)

It is the first time I am seeing lions in the wild — and so close! — and nothing could have prepared me for the sight or its power to silence. Back at our camp, I walk around in a sort of daze, not minding the giant hyena asleep under the deck of the tent next door.

After an afternoon downpour, we set off on a game drive in another direction, toward an expansive, hilly veldt. We find zebras en masse, marabou storks (known as the "undertaker bird") scouring the grass for dung beetles, and even a quick-footed springbok.

Sky speeds further along the periphery and points out a massive tree in the distance, the African baobab. It is some thousands of years old, which is hard to grasp, and its trunk is 30 feet in diameter, with a deep gouge carved out by the tusks of elephants. Sky tells us the elephants go mad for its water, and can even seem drunk after indulging in it. I ask if the tree will survive, and he explains that when the plains filled with water again in winter, the baobab will heal itself. 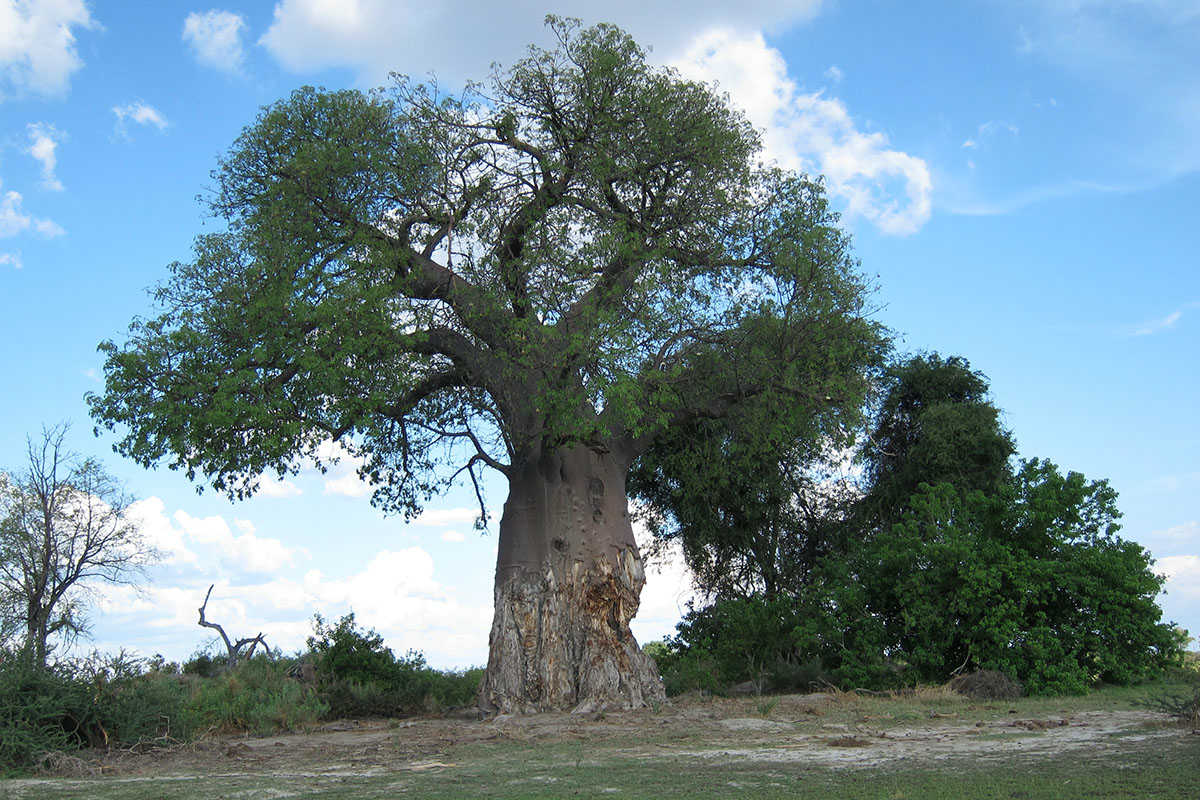 Suddenly there is a call on the radio and Sky announces that he has something very special for us: A wildebeest is about to give birth and a leopard is nearby. I do not know how to feel about either, but yes, we had to get there now! We zip across a sunny, breezy savannah.

The large wildebeest begins to take shape in the grass, but we can see that she is not moving and soon discover that she had died before birthing the calf. It is a heart-wrenching sight — and also the circle of life in action.

No sooner have we taken in the scene when, some 50 feet away, a female leopard swishes her tail in the shade.

My heart is racing. What happens now? The leopard surprises us by walking away from the wildebeest and into the dense forest surrounding the open plain. Watching her sit up so tall and with that amazing coat is incredible.

Sky is more excited than I have seen him before. He turns and follows her into the brush, the vehicle commanding the terrain like a graceful tank. As we pass over the forest threshold, he points out two other kills — a warthog and a pelican — that the leopard has stashed away under the trees. It is no wonder she had walked away from the wildebeest; she was full. 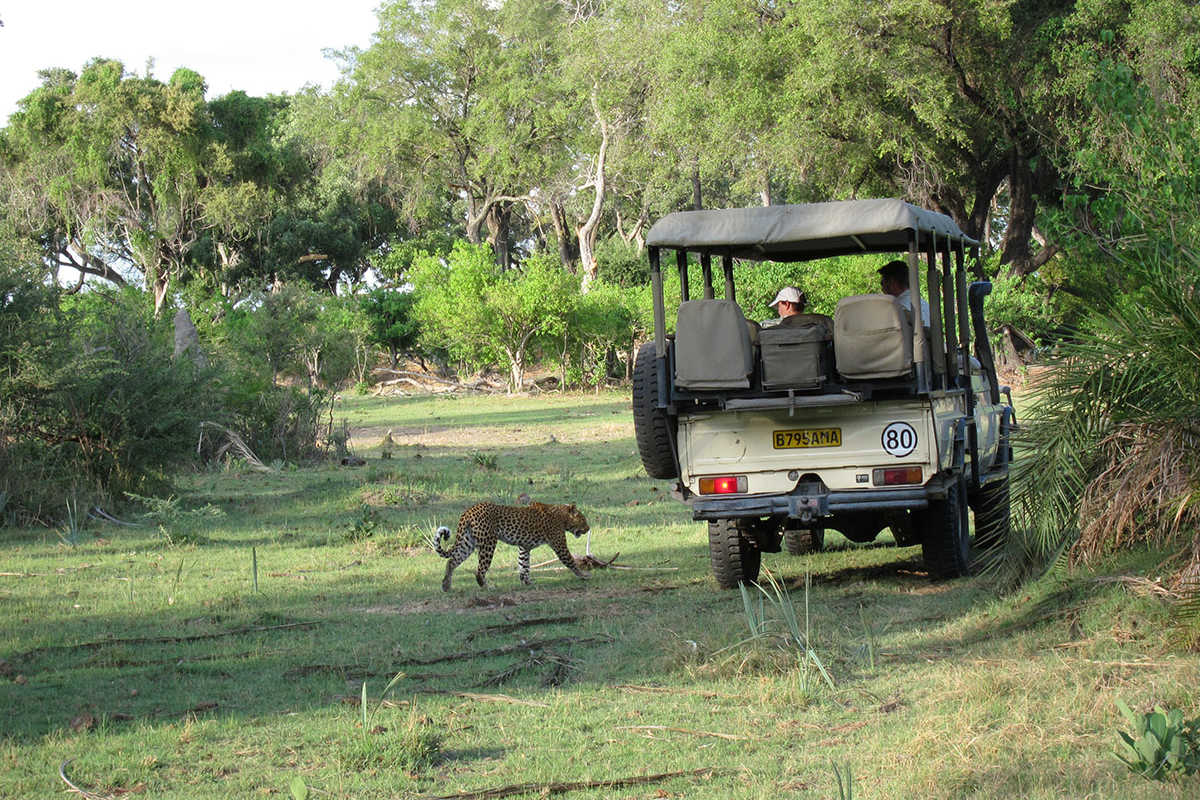 She sits on top of a log before flopping down and rolling in the grass, where she paws the long strands of a skinny palm like a playful kitten, as if putting on a show for us. When she tires of this game, she walks toward the vehicle, stopping to look up at us before darting by. I don't remember when I stopped breathing, but I gasp out loud as she takes off into the forest. Both awestruck and thrilled, I sit back in my seat, aware that this was the kind of moment — the kind of day — I will not likely have again in my life.

Meeting a leopard, filmed by the author.

We cross a stream and head to the other side of a deep marsh. Still going on about the leopard, we nearly miss a huge pod of hippos, spotting only the flash of their giant bodies as they plunge into the water with a tidal splash. Honking and grunting, they keep their eyes on our every move, and occasionally stretch open their mouths to remind us who is the boss.

Sky stops just beyond the marsh, where sundowner cocktails await us. The horizon dims with hues of pink, blue, and lavender as the sun continues to sink, now showing behind the silhouettes of palm trees. In the opposite direction, a storm is brewing, a column of rain already visible. We tip back our cocktails — mine a vodka and tonic — before racing back to camp to beat the rain. 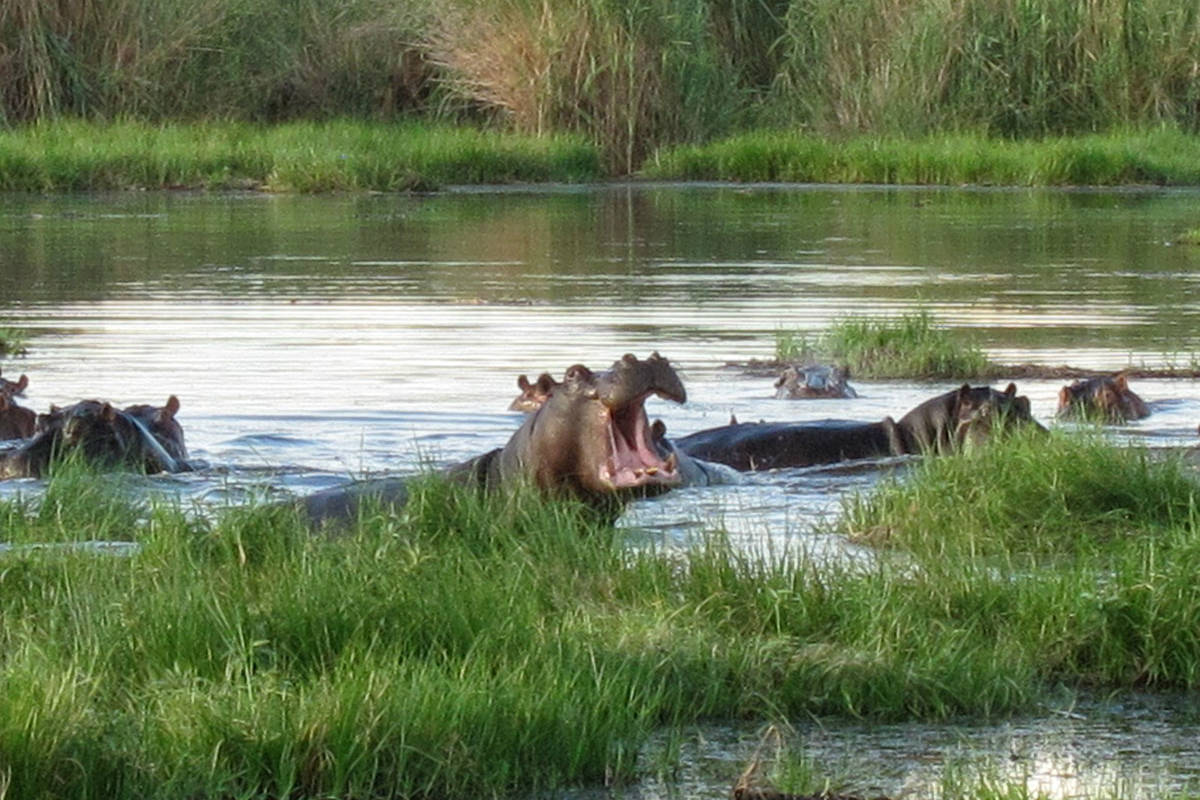 First, I should have brought far less clothing since daily laundry service is available complimentary at Chief's Camp (and every other camp on this trip). Second, Africa is humbling and life changing, and doesn't work as a simple bucket-list destination. You will want to go back before you've even left.

Some say the best time to visit Botswana's Okavango Delta is during the cooler, dry season (June to October), when wildlife is active longer and easier to spot against dried, brown foliage. I went in December during the rainy season (November-March), and thought it was fantastic. While soupy at times, wildlife was abundant (though not a single mosquito), the landscape was lush, and prices ran 30-40 percent cheaper.

Believe it: You can actually fly nonstop on Delta from Atlanta, Georgia, to Johannesburg, South Africa, in a whopping 16 hours and 55 minutes. I recommend upgrading to Economy Comfort at minimum (from $99 each way), bringing an extra seat cushion (man, that seat can get hard), and banking on the awesome in-flight programming. Once on safari, moving about often involves a series of puddle-jump flights, which are far less luxurious. 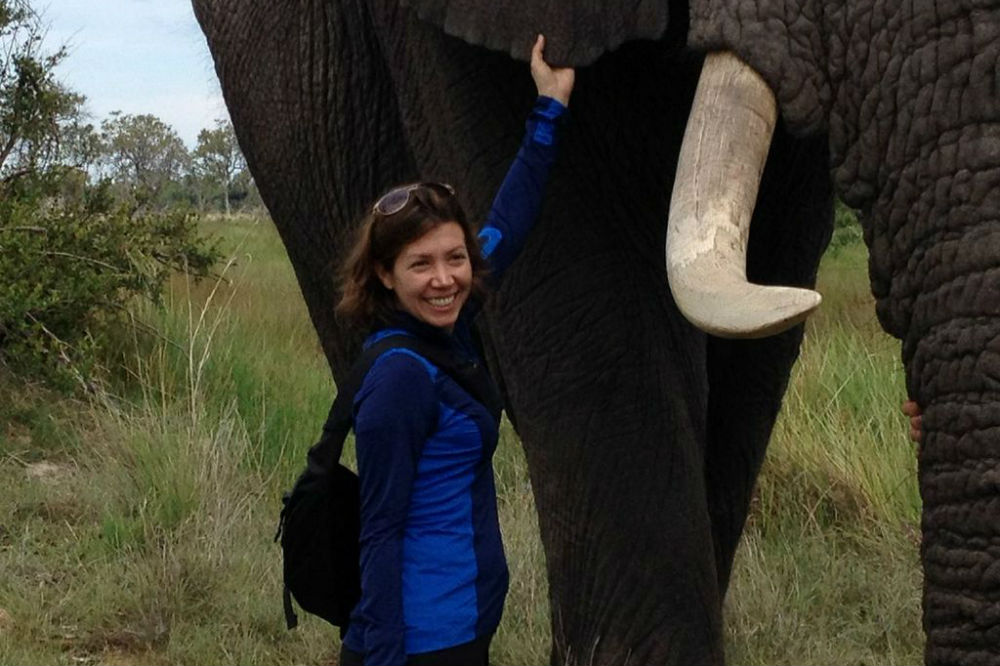 How to Do a Safari

I traveled with Abercrombie and Kent on their Botswana Safari in Style trip (from $9,195). Considered the pioneer of the luxury African safari with some 50 years experience, it's hard to beat their knowledge of the continent or their ability to orchestrate a dreamy safari.

Beyond quick-dry clothes and bug repellant, bring a powerful flashlight (how else to see the hippos grazing near your tent at night?), Imodium, an antibiotic (better to be prepared if it hits), and packing cubes, which let you neatly and compactly organize your goods inside your bag (likely a safari-required duffel).

Ask Fathom: What to Pack for a Safari?
Losing My Virginity on Safari