The next time you're in Rio de Janeiro, skip the sexy beaches and dive into the urban jungle. The city's botanical gardens, hidden amid the skyscrapers, are a reminder of Brazil's most treasured asset — the beautiful, biodiverse Amazon. Paula de la Cruz kicks off South America week on Fathom with a three-part itinerary for Brazil, starting with a naturalist's tour of Rio.

RIO DE JANEIRO – For those who chase lush urban landscapes, Brazil is the ultimate paradise. On a recent trip, I spent a few weeks visiting the Atlantic forests in Rio de Janeiro, the flooded forests near Manaus, and the savannas of Brasilia. It turns out bold botanicals are the perfect match to the late 19th-century monumental modernism fostered by the rubber boom in the Amazon. I forgot about the sexy beaches of Brazil and dove into its urban jungles, starting in Rio.

Parque Lage is an Italianate palace with halls of frescoes and an outdoor courtyard with a large stone swimming pool built by Henrique Lage in the early 1920s for his opera singer wife Gabriela Bensazoni. Despite its regal beginnings, the neoclassical mansion reached its swankiest times after 1948, when Gabriela's grand-nephews turned it into the party palace for the best of Carioca society.

Although restored in 2002, the mansion feels like a magnificent ruin you just discovered in an overgrown forest of royal palms, cinnamon shrubs, and jacaranda trees. Parque Lage has an aquarium and a visual arts school that invites curators to organize contemporary art exhibitions. If you fancy reading in the park or want to make an impressionist picnic dream come true, bring lunch and borrow a book from the free exchange library box in the front garden, which has many titles in English. 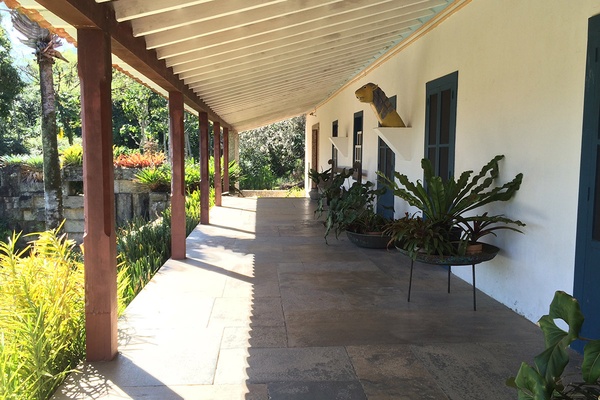 Burle Marx was a gifted gardener and an eclectic collector. During the 1950s and '60s, when many of Rio's classic buildings were torn down, he purchased demolished façades and reassembled them like a mismatched puzzle to create backdrops for ponds and the outdoor dining room in his garden. He also decorated the porch of his rural-style house with bow figureheads from Amazonian riverboats, which native peoples believed protected them from evil spirits during night rides. His collection of palms, bromeliads, cycads, and heliconias, among many others, fills 89 acres, and was declared a Brazilian cultural heritage site in 1985.

Jardim Botânico do Rio de Janeiro began as a tea plantation under Portuguese king Dom João VI in 1808 and enjoyed many decades of abundant harvests. But after higher quality Asian tea was introduced in Brazil, it was converted into Panama-hat plant farms and, later, into black mulberry orchards to feed silkworms.

Legend has it that a royal palm planted in the garden started to bear fruit in 1829. The garden's director, Bernardo Serpa Brandão, instructed gardeners and slaves to burn the seeds to ensure his specimen would be the only one in Brazil. But slaves climbed the palms at night to harvest royal palm seeds to sell, and the trees became widespread. Today, the royal palms form a beautiful and dramatic allée near the main lodge. 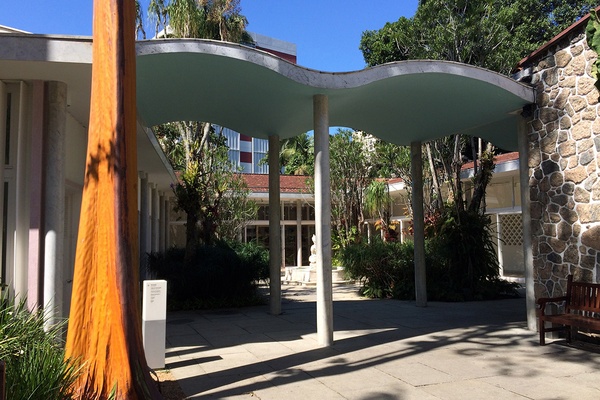 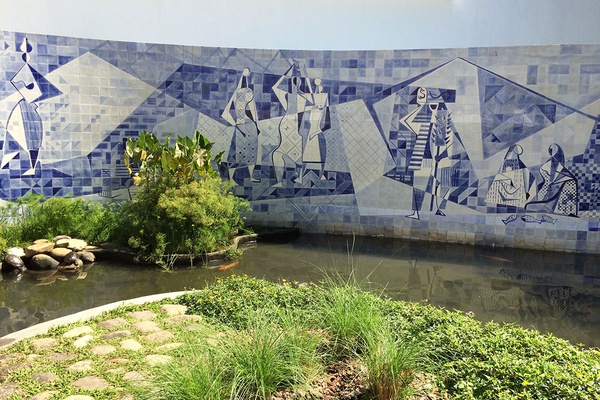 Originally built as the private residence for Walther Moreira Salles, who was the Brazilian ambassador to the United States twice in the 1950s, Instituto Moreira Salles embodies the best of Brazilian modernism. Architect Olavo Redig de Campos designed the house around a courtyard, with the entertaining rooms opening to covered verandas on both sides. Burle Marx designed the gardens and swimming pool in his characteristic organic shapes. Of special note are the doorknobs, which are modeled after a clay impression of Moreira Salles's right hand.

The highlights of the garden is a pond with water lilies and papyrus backed by a modern tile mural by Candido Portinari, one of Brazil's most prominent neo-realism painters.

Take the ferry across Guanabara Bay for the best view of Rio and for Oscar Niemeyer's out-of-Star trek MAC-Niteroi museum, which will reopen in 2016 for its 20th anniversary. After visiting the museum, relax at the low-key beaches by the bay and stop for iced coconut water at one of the many kiosks by the water. 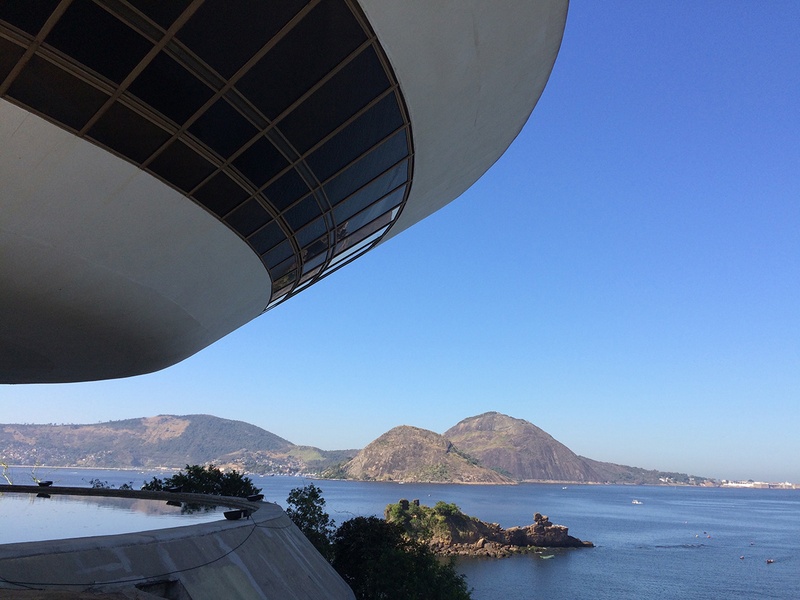 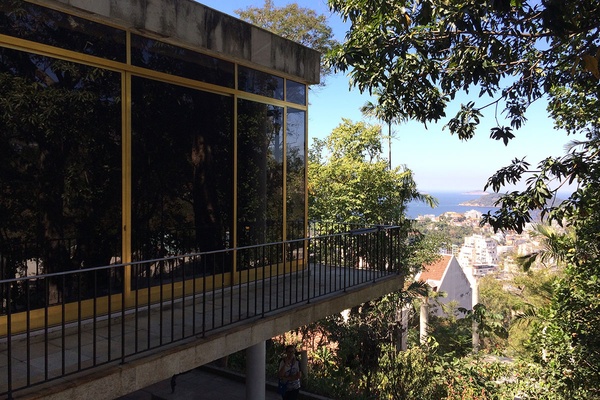 Chácara do Céu overlooking the city.

Chácara do Céu (literally, "heavenly country house") is a totally off-the-beaten-path museum on a hilltop in the Santa Teresa neighborhood. Raymundo Ottoni de Castro Maya, a great art patron and collector, willed his modern residence and collection of works by Matisse, Modigliani, Degas, Seurat, and Miró, among others, as a public museum, opened in 1972. The table in the formal dining room is set as it was when Castro entertained. Burle Marx designed the gardens where visitors relax and children play after visiting the museum.

Parque do Flamengo, which runs along the coast in the center of the city, offers entertainment for body and soul, from long beaches and exercise equipment along the promenade to the Rio de Janeiro Museum of Modern Art. During the upcoming 2016 Summer Olympics, the park will host athletics and road cycling events. 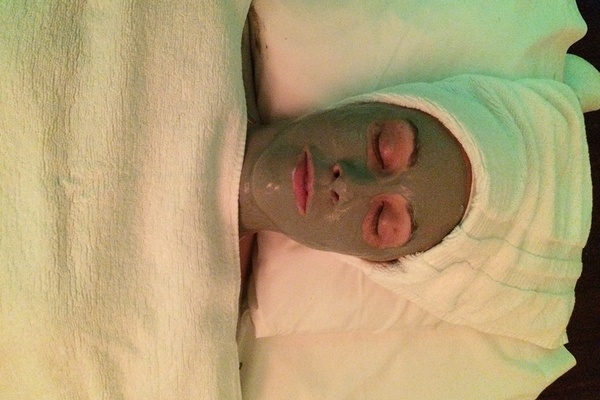 When Rio de Janeiro was still Brazil's capital, the president lived in Palácio do Catete in the Catete neighborhood. Many historical events happened here, including the declaration of war against the German Empire in 1917 and the Axis in 1942. It's a visit rife with drama, from beautiful inlaid palace floors made with indigenous hardwoods, to the romantic English park outside, to the tragic bedroom where President Getúlio Vargas committed suicide with a shot to the heart in 1954.

Not every garden visit was outdoors. In preparation for my Amazon journey, I went to the Copacabana Palace Spa for a botany lesson for my skin. Their Amazônia treatment is 90 minutes of exfoliation, mask, and hydration with clay and oils from Amazon plants like guaraná, cupuaçu and ucuuba butter, a rich source of vitamin C. A week later, I was still glowing from the botanical treatment (and the caipirinha at the Copacabana Palace Lounge).

A History Tour of Manaus
An Architectural Tour of Brasilia
Just How Dangerous Is Rio?
Best Day Ever in Downtown Rio
Fathom's Guide to Rio de Janeiro