After a difficult winter, Big Sur is back and better than ever, which is why we think it's the ideal time to plan a long weekend to the rugged stretch of land on California's central coast.

BIG SUR, California – Each year, as the holidays fade and the dark days of winter set in, I get an unshakable urge to flee New York City for someplace remote and green with no signs of snow. This year, I had my heart set on a long weekend in Big Sur. I'd been once before and couldn't think of a better place to spend a few days relaxing in nature. The wild stretch of land, which lays south of Monterey along the California coast, has been inspiring travelers, artists, musicians, and literary greats like Henry Miller and Jack Kerouac for a little over a century. The rocky coastline is isolated and rugged, and for someone who hasn't spent nearly enough time exploring the natural wonders of my own country, it feels surprising and otherwordly. The beauty is staggering, and, thankfully, the cell phone service is nonexistent.

The area had a tough winter — floods, fires, and landslides had befallen the secluded stretch of land, disconnecting an entire section of Highway 1 on both the north and south side — essentially creating an island. At the time, a visit really wasn't possible. Fast forward to June, when Big Sur was in full recovery mode. Highway 1 was (and is) still being worked on, but a hiking path was built in Pfeiffer Big Sur State Park, allowing locals access to the southside from the north. As of July 1, 2017, visitors can also use the trail for a $10 fee. Many people still don't know this, which is why you should go now. April through October is peak season, but the normally congested roads and busy hiking trails are empty. Hotel rooms are available for last-minute bookings and scenic spots like Bixby Bridge and McWay Falls are yours for the taking. 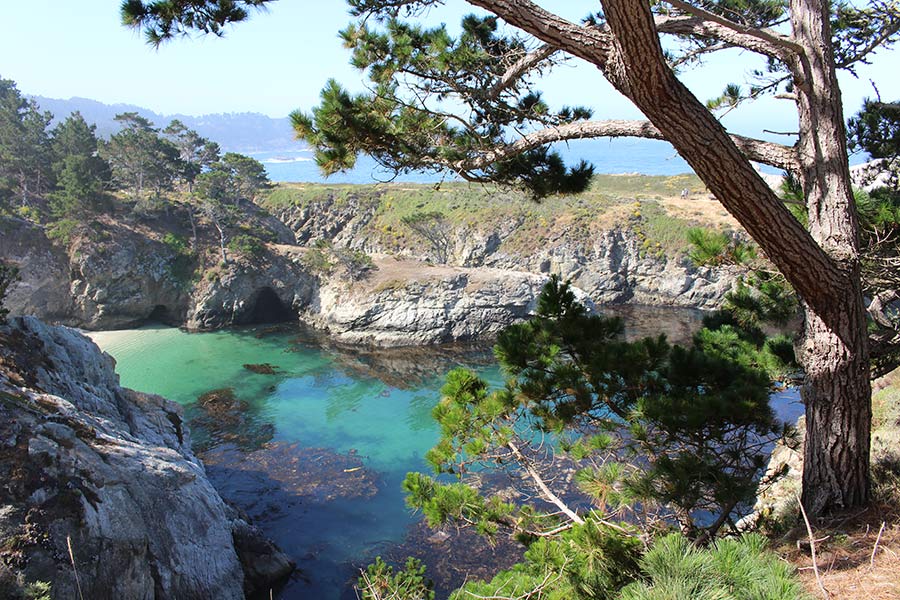 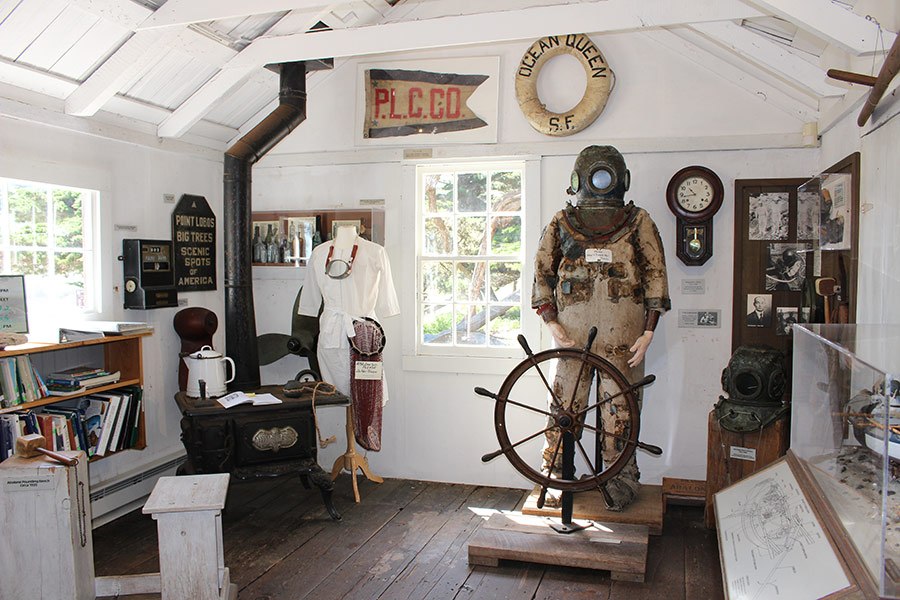 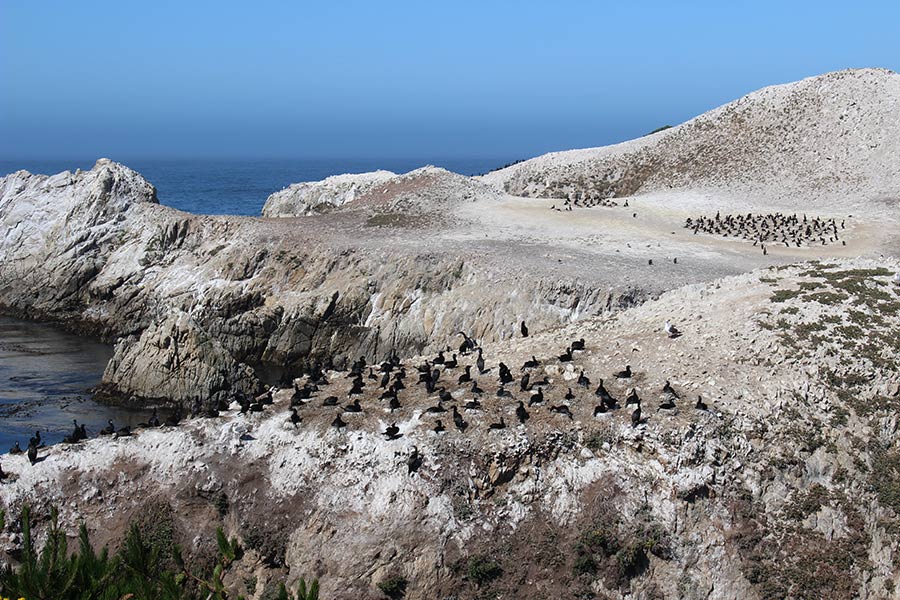 For now, the best place to start your trip is Monterey, which you can fly into from various cities or drive to from San Francisco. Those coming from Santa Barbara or Los Angeles will have to weave their way up and around using US-101 North. I flew into Monterey Regional Airport (MRY) with a short layover in Phoenix and spent the night in Carmel.

From Monterey, the drive to Big Sur is a little under a half hour. I stopped at Point Lobos State Natural Reserve, where a short hike took me to a cliff overlooking the glistening Pacific. I visited the Whalers Cabin Museum, a tiny gem with a knowledgeable docent and artifacts that tell the story of the many cultures (Ohlone, Chinese, Portuguese, Japanese) that utilized and conserved the surrounding land. From there, I headed to Garrapata State Park and Beach, which is the start of official Big Sur territory. There are no signs to mark the beach's location, so keep your eye out for three numbered turnouts. About 2.3 miles south of Soberanes Point is a small stretch of beach with caves and coves carved into the rocky coastline. Come spring and summer, there's a breathtaking array if wildflowers that can be reached from a small path along Doud Creek. For lunch, I stopped at Rocky Point Restaurant, where almost every seat has a panoramic view of the Pacific — along with whales, dolphins, and sea-otters on clear days. I continued south to Bixby Creek Bridge, a favorite spot for photos and car commercials. You may also remember it from the opening credits of Big Little Lies, an HBO show that filmed in the area. Next, I made my way to Point Sur State Historic Park and Lighthouse, a 128-year old lighthouse on a 362-foot-tall volcanic rock. The three-hour tour was a highlight, so I would definitely recommend squeezing it in, especially if John and Carol O'Neil are leading. The married couple have a deep love for the site's history and can tell you about the families who have called it home over the years and the occasional ghost sightings. I made my way to Big Sur River Inn & Restaurant, where I sipped on a beer from one of the Adirondack chairs in the river. 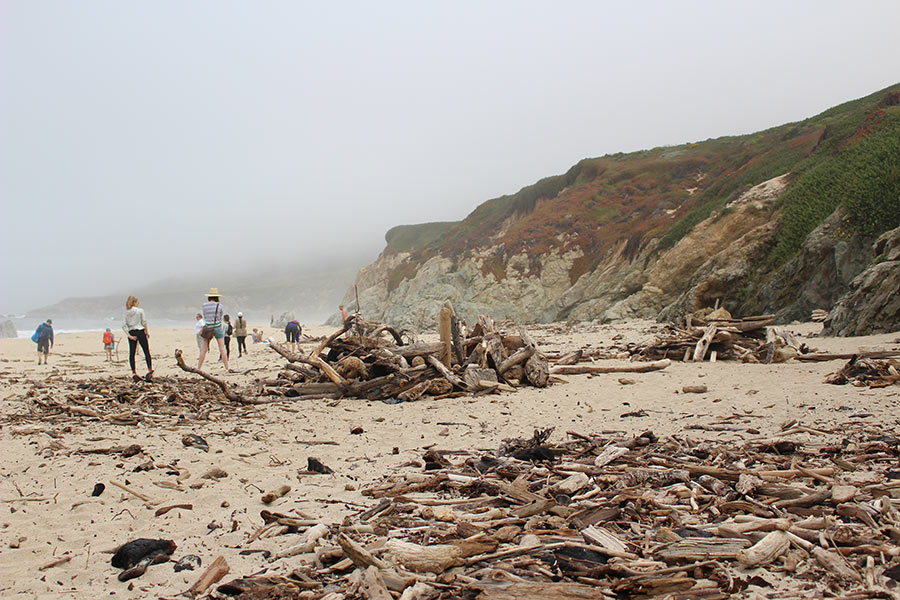 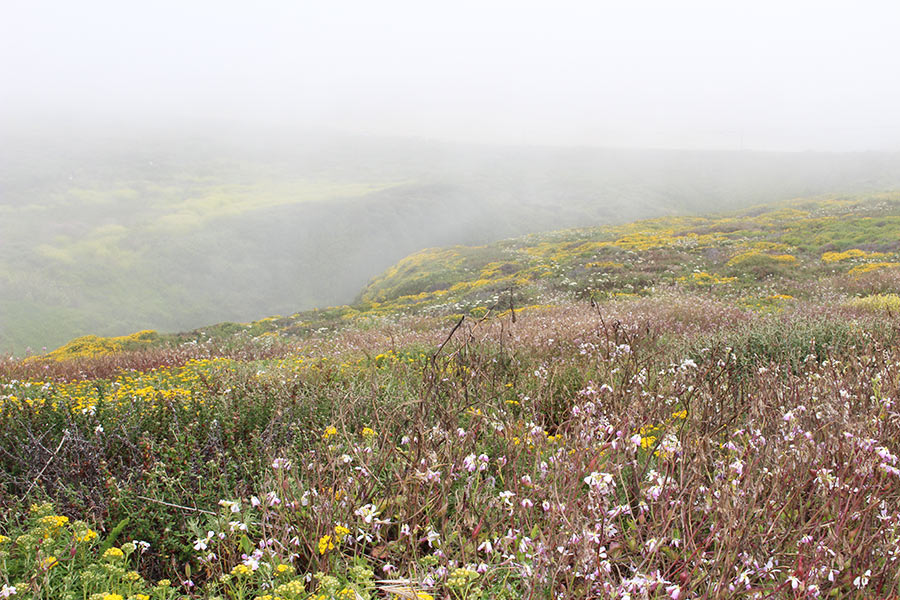 The wildflowers at Garrapata State Park and Beach. 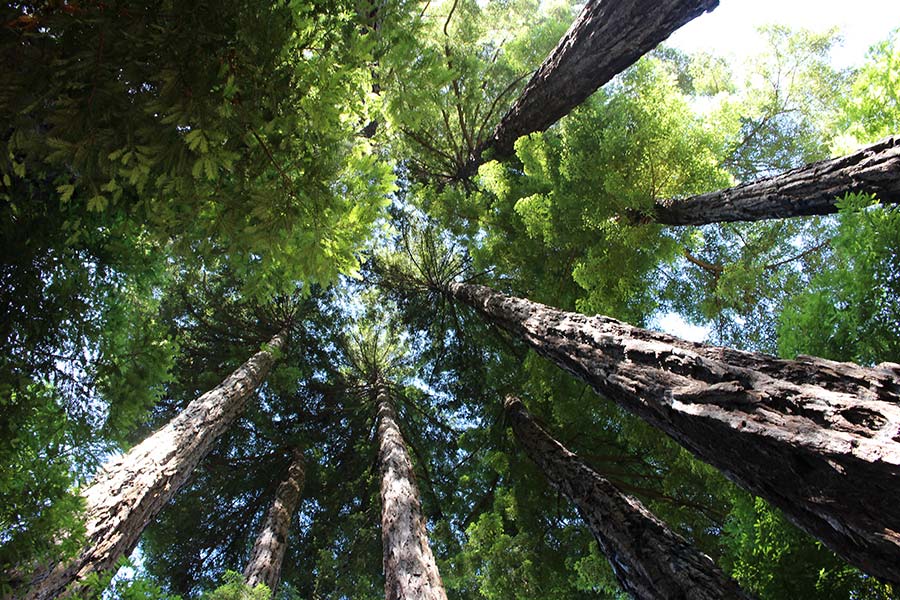 Redwood trees from below at Glen Oaks Big Sur.

I started my day at Big Sur Roadhouse, which has one of the best breakfasts in town. It was going to be a long day, so I made sure to sample one of the homemade donuts. To get to the southside, I headed to Pfeiffer Big Sur State Park, where a short vertical trail comprised of switchbacks takes about twenty minutes to climb. It isn't nearly as hard as it sounds, but make sure you wear sneakers and watch out for ticks and rattlesnakes. From the top you'll need to arrange a ride to get around or use Sur Transportation. I took a spin on an electric bike with Big Sur Adventures, which you can pick up at Loma Vista Gardens and take as far as McWay Falls. If you do one thing in Big Sur, it should be this. There are barely any cars on the southside, so you will have Route 1 to yourself. Zipping around the curves at twenty miles per hour without a car in sight while looking out at the ocean is a thrill and a rarity. I doubt I'll ever have a chance to do something like that again. Under normal conditions, you would find a long line of cars and a handful of cyclists en route to various sites along the coastline. I had lunch at Nepenthe Restaurant, an iconic Big Sur joint perched above the ocean. The Amborsia Burger is as good as everyone says. From there, I headed back to the northside to prepare for an early morning flight out of Monterrey, but if I were to do it over again, I would pack a change of clothes and book an early dinner at Sierra Mar, the fine dining restaurant at Post Ranch Inn. 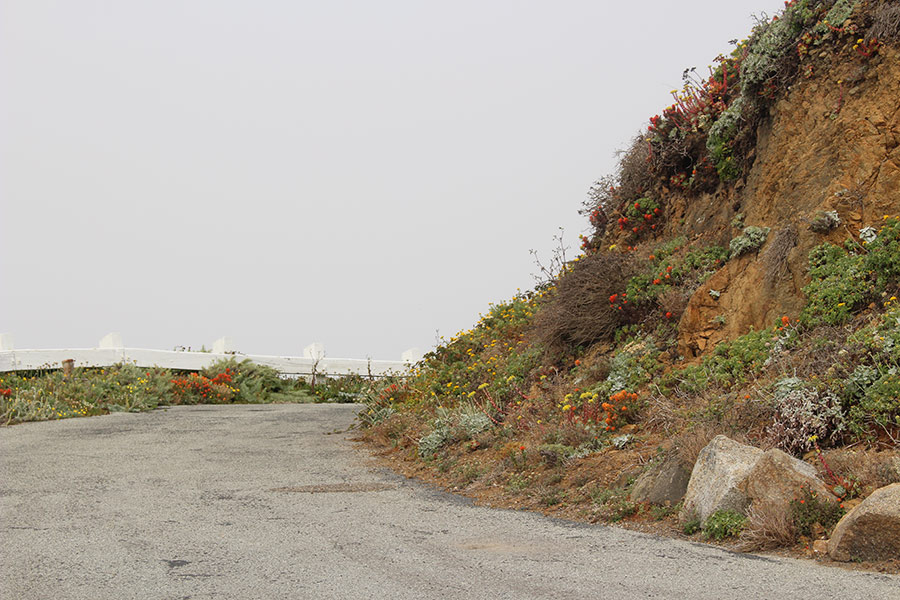 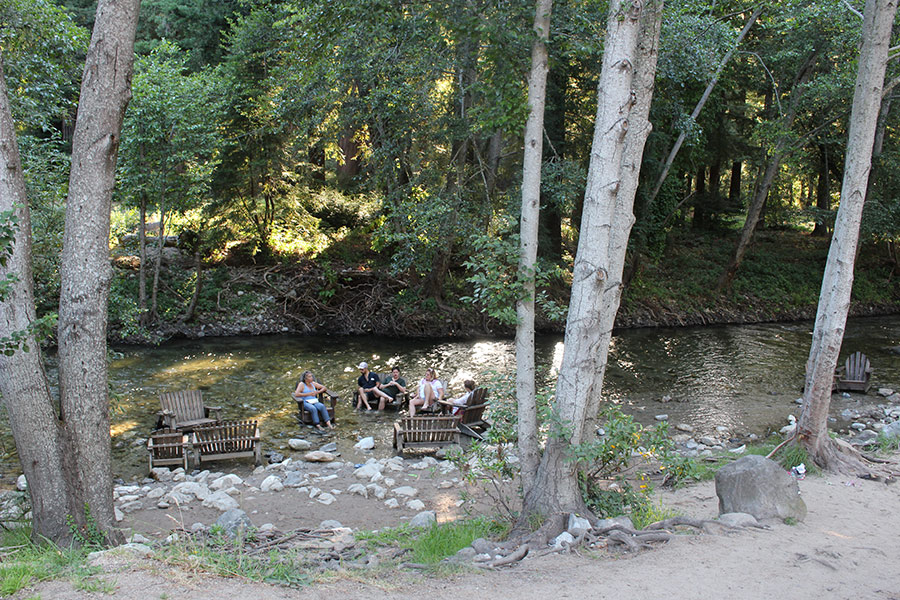 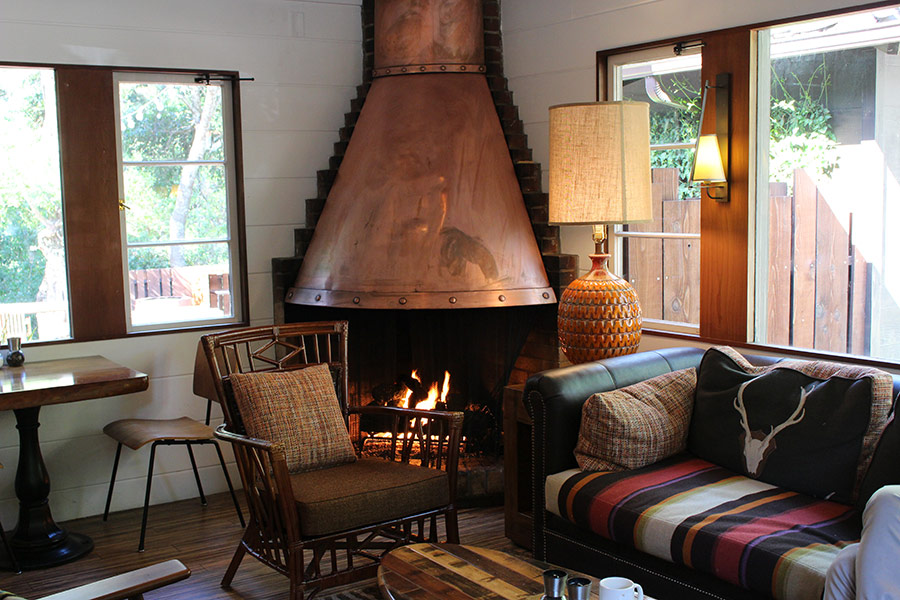 The scene at Big Sur Roadhouse.

From camping and cabin rentals, to luxury hotels and home rentals, Big Sur has a variety of accommodations that hit all price points. For something low-key and family friendly, Big Sur River Inn & Restaurant has been a favorite since opening as the area's first hotel in 1932. Glen Oaks Big Sur is a modern motor lodge with individual cottages and cabins and has more of a boutique feel. Post Ranch Inn is one of the few southside hotels currently open and the nicest place to stay in Big Sur. The eco-luxe getaway feels incredibly remote and romantic and is currently helicoptering guests in from Del Monte Aviation in Monterey.

Big Sur, An Otherworldly Escape on California's Central Coast
Keep Your Head in the Clouds Above Big Sur
Hit the Road: 11 Itineraries for the Ride of Your Life