What's the best thing Fathom creative director Crystal Meers did on a recent trip to Tokyo? She got a manicure.

TOKYO – To check off everything on my to-do/gotta-see/try-to-meet/need-to-eat list for Tokyo, I would need six months.

But I only had six days, and after the first 24 hours, it was pretty clear how it would all go down: Say hello to as many friends-of-friends as possible, consume copious Starbucks matcha lattes (they're different in Tokyo!), and get a real-deal, wild-style Japanese manicure.

In case you haven't noticed or happen to be a nail-biter, manicures are having a moment. Like Hello Kitty, sticker pictures, and sushi, CalGel (the unchippable nail lacquer) is native to Japan. Combined with creativity, skillful attention to detail, and fashion sense, manicures are now a form of self-expression.

I didn't want to go just anywhere. Nail salons are like snowflakes: There are a million of them and they all look the same until you get up close. I turned to Raymond Johnson, a friend's friend, who turned out to be a tireless tour guide and amazing ambassador to the creative culture of Tokyo. "You have to meet my friend Yuko! She does everybody's nails." Before he finished the sentence, he dialed Yuko at Nail Studio Asa (now called reAulii), a tranquil salon owned by renowned hand model and nail artist Asako.

Less than 24 hours later, Raymond and I cut through the Roppongi Hills shopping complex, skipped out the back door of the mall, and made our way through quiet back streets leading to a gated courtyard and small office complex. We buzzed. And then Yuko Kamikatahira showed me the way to her nail station. 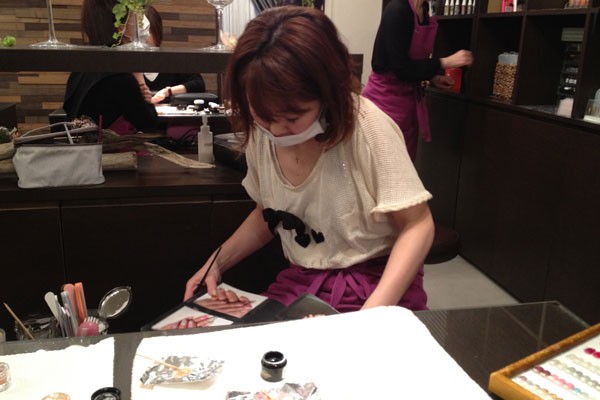 We conversed about styles, looked at manicure highlights on her iPhone, referenced a color chart, and rifled through boxes of itty-bitty charms. Yuko's own nails were perfectly painted with a pastel marble effect. Her colleague had a Southwest vibe with desert shades as a backdrop for turquoise chunks outlined in gold beads.

It turns out the extreme 3D art (beachscapes, large molded bows, rosebuds, Hello Kitty heads, and any sort of sculpted vignettes) that made waves over in the States, is pretty much on the outs. Women — from tweens to senior citizens — are going for more a subtle style, taking cues from fashion trends and seasonal motifs.

Taking into consideration my favorite colors, the stack of bracelets always on my arm, various snapshots, and the fact I spend a lot of time banging away at a keyboard, Yuko formulated a basic idea for a pop color-block pattern. She warmed up by mixing a neon coral base coat with clear CalGel and a stack of pigments. She slathered three of my nails in a thick layer of gold sparkles and treated the rest of my fingertips to sparkly rectangles. She added aqua squares (inspired by the sweatshirt I was wearing) and a pop of peach as a nod to spring.

I had my manicure three-and-a-quarter hours, five paint shades, ten gold studs, and one cluster of "diamonds" later. We named it Miami Mondrian. Even though it would only last for three weeks, it was my favorite souvenir. And I didn't even have to cram it into my suitcase. 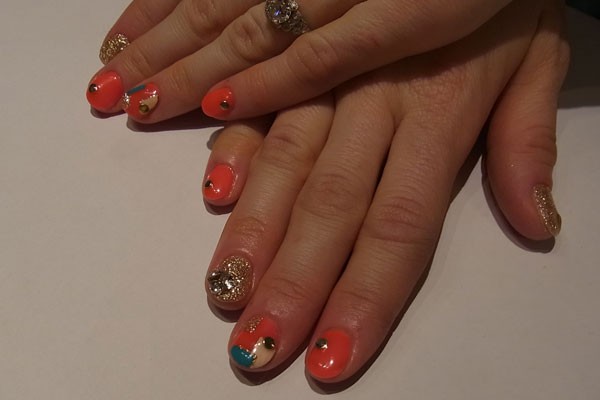