Stan Parish, whose debut novel Down the Shore we've just excerpted, has sweetly spilled the details about his slice of beach paradise away from the summer crowds in New Jersey. Now please keep it to yourself.

JERSEY SHORE, New Jersey – It's finally sinking in on the east coast that summer is not, in fact, endless. Packed beaches are the new normal through at least October, but there's an inexplicable oasis on the Jersey Shore between the tramp-stamped nightmare that is Belmar and the over-regulated (no eating!) beaches of Spring Lake.

Pull up to the corner of Howell Avenue and Ocean Avenue, and you'll see what I mean: Jersey Shore extras to the north, screaming children to the south and, strangely, very few people on the wide strip of sand in front of you.

You're looking at a designated surfing beach, which means you can't swim in between the two closest jetties unless you're on a board. This ensures thinner crowds, and, if you're dying to get wet, you can walk past either jetty and jump in. Bonus: Walking is good for you.

Some friends named this beach Playa Santos after a drug dealer from Nicaragua, but you can call it whatever you want, as long as you don't put your damn towel right next to mine when it's basically Manifest Destiny in all directions. 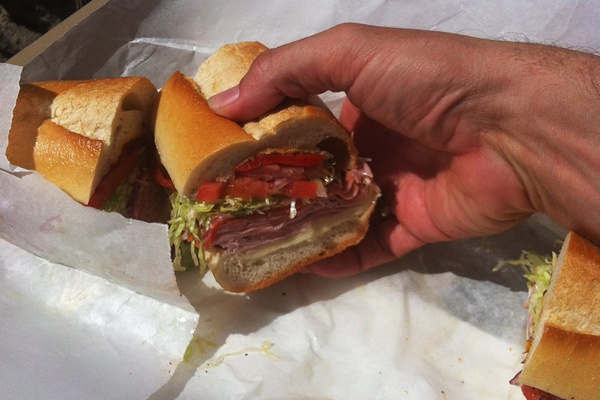 Down the shore, they call this a "hoagie."

For nourishment and nicely chilled San Pelligrino, hit Joseph's Delicatessen near the Spring Lake train station. One bite of their seriously artful Italian sandwiches and you will understand all the "Reader's Choice" awards on the wall inside. Joseph's closes absurdly early on Sundays (why? because they can), at which point you should drive to Pete & Elda's in nearby Neptune City, where the paper-thin crust pizza and cheap beer has been drawing crowds for half a century. Sleep it off in the sand, because Spring Lake is that safe and calm.

Two roads diverge on the way out of town: You can go the family-friendly route and grab a big-ass milkshake at Hoffman's Ice Cream or duck into the nice dark bar 10th Ave. Burrito, just a few blocks north in Belmar, for an equally large pineapple habanero margarita. Research shows that is it also possible to do both.

See all locations mentioned in this story. (Google Maps)