If there's one thing London does well, it's drink. If there's one town that's earned a celebratory cocktail, it's London. (Although, come on: We could all use a cold one.) Now that London is finally (finally!) beginning to emerge from its long (so long!) four-month winter lockdown, we're happy to run this roundup of the city's best hotel bars, excerpted from the terrific and beautifully designed Behind the Bar: 50 Cocktail Recipes from the World's Most Iconic Hotels, by Alia Akkam. (We've been holding this for months: It didn't feel right to tease.) London hotels are a few more weeks away from opening, but reservations are already filling up at those with outdoor seating at their bars and restaurants. Which makes this a good time to plan a forthcoming pub crawl.

London is arguably home to the world’s best hotel bars. Other than the three must-visit establishments at The Connaught, The Savoy, and The Stafford, there are plenty of other remarkable spots throughout the city for a welcome Old Fashioned respite, including these:

Artesian at The Langham, London
Directly across from BBC Broadcasting House in Marylebone, The Langham, London opened in 1865. During World War II, the hotel became the stomping ground for American reporters. Named for the 111-metre- (365-feet-) deep well underneath the hotel, which once supplied fresh water for its stylish guests, Artesian’s David Collins’ interior mixes Victorian-era romance with Far-East intrigue. Menu concepts are always in flux, so look out for thematic concoctions such as the ‘minimalist’ hybrids of St-Germain liqueur and carrot or Cognac and green coffee.

DUKES Bar at DUKES LONDON
No one can prove that James Bond scribe Ian Fleming was struck with inspiration for 007’s famous "shaken, not stirred" motto while drinking at DUKES Bar, as some claim, but what is certain is that the Martini acquired a whole new level of cachet at this very bar in the 1980s. That’s when venerated bartender Salvatore Calabrese started working at the hotel dating from 1908 and introduced captivated clientele to his and Gilberto Preti’s "direct Martini," a rendition of the drink that shuns ice for frozen gin. After Calabrese and Preti came Alessandro Palazzi, who — in his suave white jacket — still makes his Martinis from a mobile rosewood trolley in the same fashion. The chilled glass is first rinsed with dry vermouth made in collaboration with local distillery Sacred Spirits, the frozen gin (or vodka) is added, and then the cocktail is simply finished with Palazzi’s own twist: an aromatic Amalfi Coast lemon zest. These Martinis are so potent that only two of them can be served to any one guest.

The Coral Room at The Bloomsbury Hotel
With all the oomph of a 1920s grand Euro café, The Coral Room, completed by Martin Brudnizki in 2017, is a chic newcomer to the hotel bar scene. Drink a May Day Spritz (Monkey 47 gin, Italicus Rosolio di Bergamotto, apricot honey water, Empirical Spirits Fallen Pony, and Ridgeview Bloomsbury sparkling wine) against marble, Murano glass, and walls painted in the bar’s namesake hue. For the second tipple, head downstairs to The Bloomsbury Club Bar. The Bloomsbury Group surely would have been eager to partake of philosophical discussions in this brooding leather-and-wood room or on the adjoining, twinkling terrace.

George’s Bar at St. Pancras Renaissance Hotel London
There is no more fashionable send-off to the Paris-bound Eurostar than a cocktail at the moody burgundy-and-brass George’s Bar — designed by David Collins Studio in 2018. Directly inside St. Pancras International Station, this haunt adjacent to Marcus Wareing’s Gilbert Scott restaurant is an ode to George Gilbert Scott, the architect who designed this very building as the Midland Grand Hotel, a fancy 19th-century railway bolthole. With all those passengers running to and from trains, George’s is certainly a magnet for people-watching while sipping an Amber Embers (Lapsang Souchong tea-infused Scotch, Martini Rosso, apricot, lemon, smoke) underneath the ceiling’s cluster of extraordinary original bells, but it’s hard to take your eyes off the friezes and fringed lamps.

Scarfes Bar at Rosewood London
English cartoonist and illustrator Gerald Scarfe, who created the promo video for Pink Floyd’s Another Brick in the Wall (part 2), lent his name and his artistic prowess to this bar at the Rosewood London when it opened on High Holborn in 2013. Bearing the signature upbeat-clubby imprint of designer Martin Brudnizki, the magnetic room is graced with Scarfe’s caricatures of well-known Brits such as Mick Jagger and Margaret Thatcher. Look out for changing Scarfe-illustrated menus that may nod to different musical genres such as jazz and classical with the Crescent City Crusta (Rémy Martin 1738, pandan, banana vinegar, unripe grape) and Curtain Call (Roe & Co Irish whiskey, clarified carob, hazelnut and mint, fortified wine, liquorice), respectively.

Punch Room at The London EDITION
Although additional Punch Room locations have now sprouted in the Barcelona and Shanghai incarnations of Ian Schrager and Marriott International’s EDITION Hotels, the concept first kicked off in 2013, at the EDITION London in Fitzrovia. The original, with its fumed oak bar and surreptitiously drawn blinds straight out of a 19th-century gentlemen’s club, remains the city’s choice locale for punches that commingle ingredients such as Wild Turkey rye, Martini bitters, Martini Rubino, hibiscus tea, and red (bell) pepper syrup, or a comforting cold-weather Grog (Plantation OFTD rum, lime juice, grapefruit sherbet, Cornish Manuka tea, nutmeg). 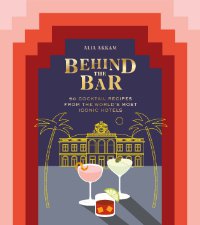 Have Another! Read (and Drink) from the Whole Book

Buy Behind the Bar: 50 Cocktail Recipes from the World's Most Iconic Hotels by Alia Akkam from your preferred bookseller: Bookshop.org or Amazon.com.

Excerpted with permission from Behind the Bar by Alia Akkam, published by Hardie Grant Books, © 2020. All rights reserved.