ST. KITTS – For anyone with a political conscience bigger than a conch fritter, traveling to the Caribbean can be fraught with anxiety.

The calm turquoise waters? They once gave passage to slave ships. The lush rolling hills? They were farmed by slaves. And pretty much every single hotel used to be a plantation. Or, even worse, is still called a plantation today. Which is why I was so grateful to discover Belle Mont Farm.

Nestled on Kittitian Hill on the northern side of St. Kitts, the hotel blends the tourism for which the Caribbean is now known with efforts to recover from and rebuild in the face of that legacy of slavery. For instance, anyone who's traveled in the Caribbean can tell you that local produce is hard to come by — often the lingering effect of slavery-era monoculture that pushed out diverse local farming in favor of sugar cane. In St. Kitts, the Caribbean's smallest independent nation, sugar cane monoculture lasted much longer. As of 2005, it was still the main crop of the island, employing four percent of residents in the harvest. Then the country shut down the industry — and set a new path.

Belle Mont Farm is literally a shining example on a hill of that new way forward. Partially owned and funded by the government, the hotel is comprised of more than 80 cottages and villas — with more on the way — built by local contractors. (In contrast, for instance, with the new Park Hyatt across the island built by an American firm with work crews from Colombia.) 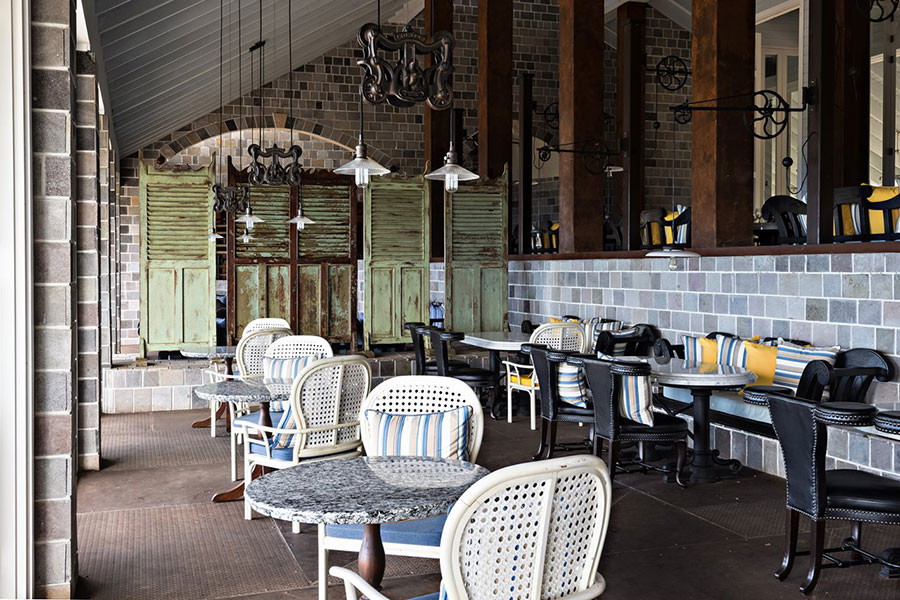 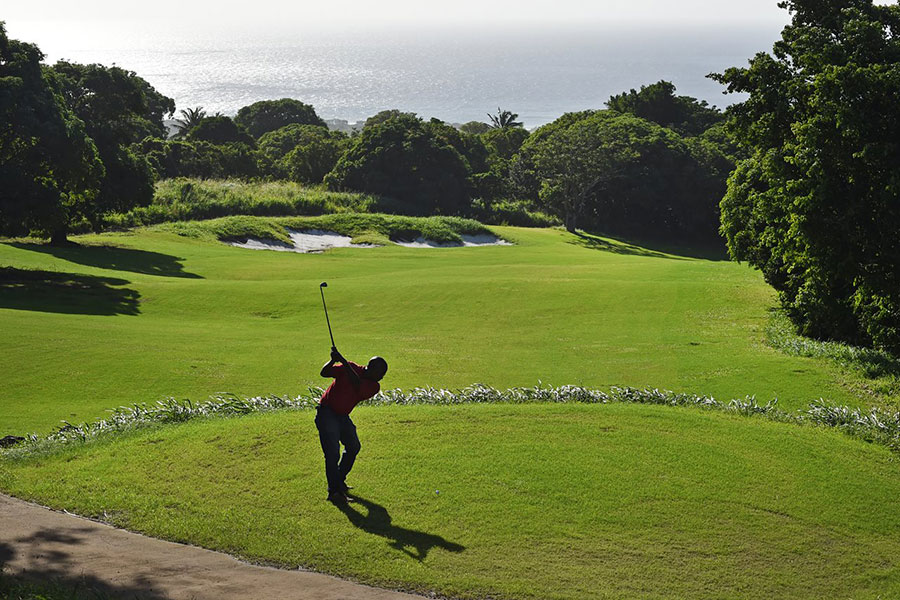 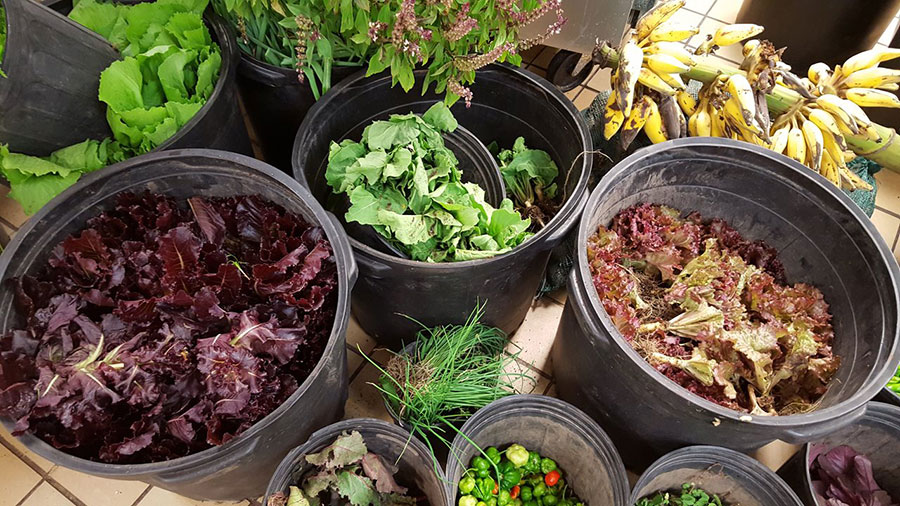 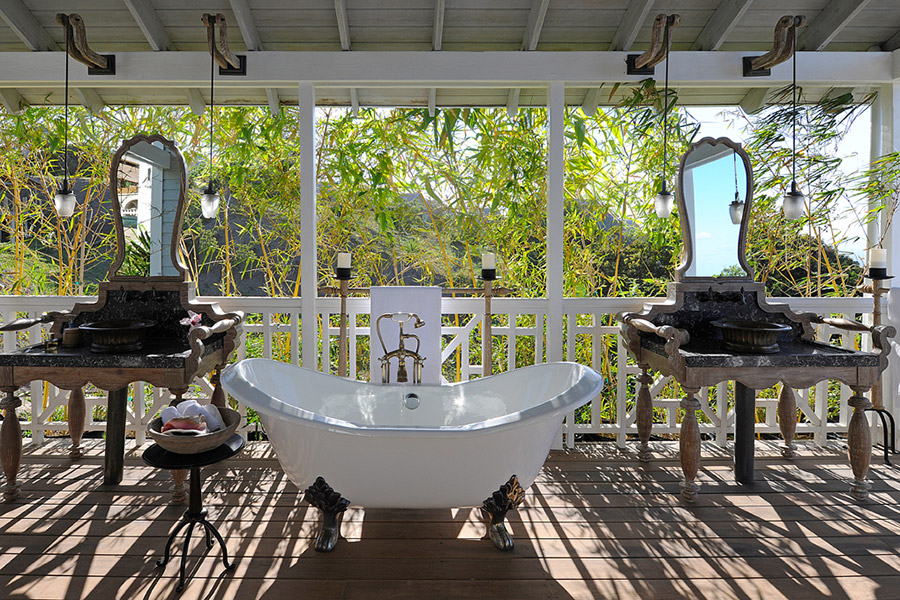 How cool is an outdoor tub?

Scattered throughout Belle Mont's 400-acre property is one of the largest farms in the region, which supplies 90 percent of the produce for the hotel's restaurants. The first night of our stay, my partner, our eight-year-old daughter, and I attended a farm dinner at a long table under a covered patio overlooking the gardens. The restaurant's French chef, Christophe Letard, was bursting with excitement to show us the tiny, fist-sized cauliflower they had finally managed to grow. The excellent meal included several dishes designed by his assistant chefs from the island, to whom Letard was quick to give credit. (A small detail, and a good one.) By the way, there's also a pesticide- and fertilizer-free organic edible golf course, the first in the world to win certification from the Golf Environment Organization. This means that many plants around the golf course are edible. You're not supposed to nibble as you play, though I suppose technically you could. You feel like you're golfing in the middle of a farm.

The hotel's owner, Valmiki Kempadoo, is Trinidadian, and, with the exception of a new general manager from the United States, everyone we met on staff was from the island. They all boasted about how well they were paid and how often they were given opportunities for promotion.

All of which would be enough to lure me to any property, but Belle Mont Farm also happens to be a luxury destination. Our guesthouse had two delightfully plush queen beds facing a wall of windowed doors that we barely ever closed. Past the doorway was our personal plunge pool. Tucked around back was an open-air bathroom, with just enough well-placed fencing to make it private and enough contact with nature to make it exciting.

The hotel, incidentally, is not beachfront. The beach is accessible via hotel shuttle, and there's a tiny restaurant for beachgoers. But we mostly relied on our private pool plus the larger hotel pool, which made my kid happy, and the swim-up bar, which made me happy. But not as happy as I was knowing that my Caribbean vacation wasn't turning a blind eye to the history of slavery and colonialism but actively resisting that history and supporting a just and sustainable new direction. 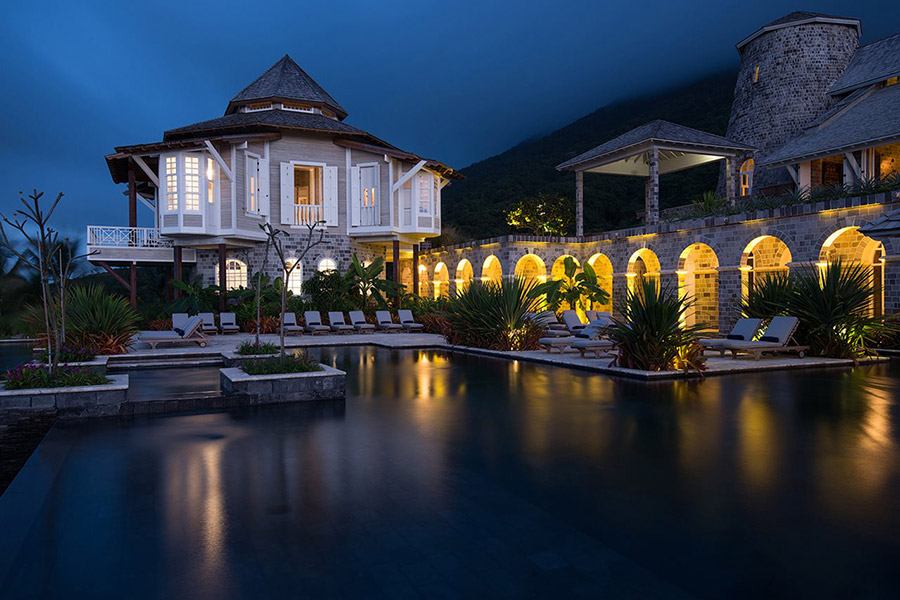 Villa with their own private pool. Photo courtesy of Belle Mont Farm. 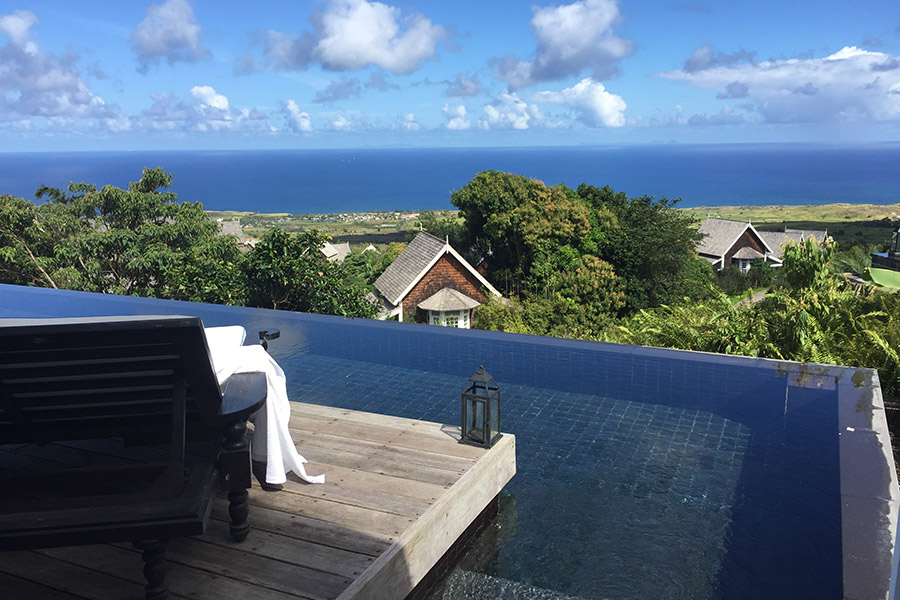 The view from the villa. Photo by Sally Kohn. 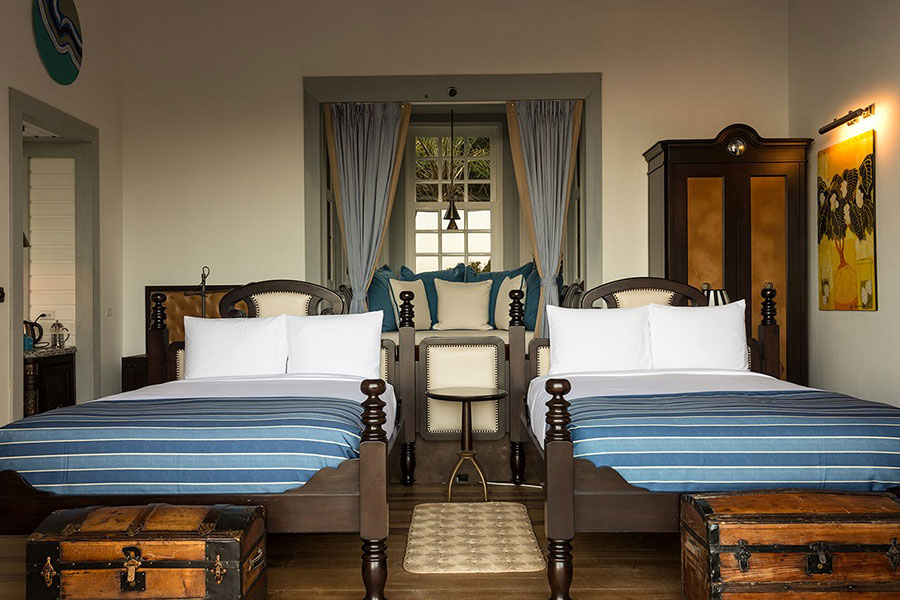 Location
On a hilltop in St. Kitts with a stunning green mountain behind it and the shimmering ocean splayed in front.

Hotel Style
Mostly one-bedroom guesthouses as well as a few multi-bedroom "farmhouses" and villas, all of which are recently built and beautifully appointed. Each house includes a private pool, a patio, and an outdoor bathroom. The property is spacious enough that you're not right on top of your neighbors, yet you can still walk everywhere within a few minutes. There are golf cart shuttles on call.

This Place Is Perfect For
Couples who want affordable seclusion and families who like pools.

Food + Drink
One main restaurant plus farm table dinners at least one night per week; beach restaurant; room service. The food is Caribbean with a French twist, fitting with the history of the region, including its colonial overlords.

Number of Rooms
84 guesthouses and villas so far, with more opening soon.

In-Room Amenities
Every house comes with a wooden crate of fresh fruit from the island, including several fruits my family had never eaten before that were strangely delightful. In the guesthouses, in lieu of televisions, there's a built-in movie projector with a screen that can be lowered with a button — a super cool feature. Every room has a view of the ocean, including a spectacular sunset every night.

Drawbacks
It's a new-ish property, training new-ish staff. So while the service is effortful and very well intentioned, it's not always thorough. We got used to our room service order always missing something. Also, you're in nature. That includes some bugs and creatures. One night we thought we saw a rat outside our room, but it was a mongoose. I'd never seen a mongoose before, so that was a plus, I guess.

Standout Detail
The welcoming staff felt as thrilled as I did to be part of a property with such great politics.

What to Do Nearby
There's great hiking around St. Kitts. You can take a boat for a day trip or overnight stay on the country's smaller island, Nevis. Nevis, by the way, is where Alexander Hamilton was born. Feel free to walk around the tiny island humming bits from the musical.

Good to Know
The island is overrun by monkeys. They're a legacy of colonialism (brought by the French for entertainment, apparently) and are now the main impediment to local farming. And they're everywhere. If you're afraid of monkeys, this is not the place for you. Your kids will love them, though the locals don't.

How to Get There
There are more and more regular direct flights to Robert Llewellyn Bradshaw International Airport (SKB), including from Toronto on Air Canada, from New York City on American Airlines, from Atlanta on Delta, and from London Gatwick on British Airways. Otherwise, your best bet is to fly through Miami; American Airlines has daily flights from Miami to SKB. The Belle Mont Farm is about a 20-minute taxi ride from the airport.

Getting Around
You don't really need a rental car. There's plenty to keep you occupied at Belle Mont's property and beach. And if you want to explore further, taxis are readily available.

Winter Is Coming, But Not to These 15 Caribbean Spots
How I Learned to Slow Down (Sort of) and Love the Beach Vacation
No Such Thing as Off-Season in Saint Lucia