The Danish word hygge is as difficult to translate as it is to pronounce — so we're not going to embarrass ourselves and we'll just borrow the definition from our favorite guidebook, A Xenophobe's Guide to the Danes, a comical and true take on Danish culture and mentality.

A love of or need for hygge is an important part of the Danish psyche. Hygge is usually inadequately translated as "coziness." This is too simplistic: coziness relates to physical surroundings — a jersey can be cozy, or a warm bed — whereas hygge has more to do with people's behavior towards each other. It is the art of creating intimacy: a sense of comradeship, conviviality, and contentment rolled into one.

Friends meeting in the street might say that it has been hyggeligt to see each other, and someone who is fun to be with can be called a hyggelig fyr, when he would hardly be described as a "cozy fellow." The truly emotive depth of the word hyggelig is best captured by considering its opposite, uhyggeligt, which means anything from cheerless through sinister to downright shocking and grisly.

To have a hyggelig time is social nirvana in Denmark. Candlelight is used to encourage a hyggelig atmosphere. In fact, the Danes are mad about candles and use them everywhere, both in public places like cafes, bars, restaurants and offices, and in the home. The dim lighting helps to soften the clean, uncluttered surfaces and uncompromising white walls that are typical features of Danish living rooms. Everyone's ideal is to have a Christiania kakkelovn (antique stove) or an open fireplace and feel the warmth from its hyggelige glow.

Achieving hygge generally involves being with friends and family, and eating and drinking. Older Danes are horrified to hear of youngsters who hygger themselves alone on the sofa with a rented video and family-size bag of sweets. 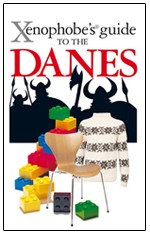 Don't stop there. Read the whole thing. Xenophobe's® Guide to The Danes.

Just Back From: Copenhagen

Reprinted from Xenophobe's® Guide to The Danes by Helen Dyrbye, Steven Harris and Thomas Golzen.