The travelers behind Eat Your World, a food-spotting site and one of Fathom's 24 Best Travel Blogs and Websites, tell us how to eat like a local in Holland.

Just back from: Amsterdam, the Netherlands.

Was it your first time? If not, how often do you go?
Scott: I was there in 1997 when I backpacked through Europe.
Laura: It was my first time!

How long were you there?
Scott: Five days.

Why did you go?
Laura: At the behest of a very close friend who wanted to celebrate her birthday there. And (of course) to cover the local food and drinks for Eat Your World.

Who were you with?
Laura: The two of us plus five friends (from New York, London, and Indonesia).

What was the best tip you got before you left? And where did you find it?
Scott: We heavily researched the city for food, accommodations, and nightlife options, so were very prepared. But our best tip came from a friend-of-a-friend (and former Amsterdam resident) who told us to go to a very special restaurant we would not have found on our own.
Laura: Restaurant Utrechtsedwarstafel! Seasonal food from a daily changing menu, wine pairings with every new dish, and a table-side visit from the chef and sommelier to describe each course. The host was surprised we foreigners had found it, as most of their business is by word of mouth.

What's the #1 tip you'd give a friend who wanted to go?
Scott: Don't go just to smoke pot or you will be missing one of the most beautiful, sophisticated cities in Europe.
Laura: Don't pre-judge Dutch food. Approach the cuisine with an open mind, do a little research (or just read ours), and you'll eat really well. Also, get an apartment if you can. 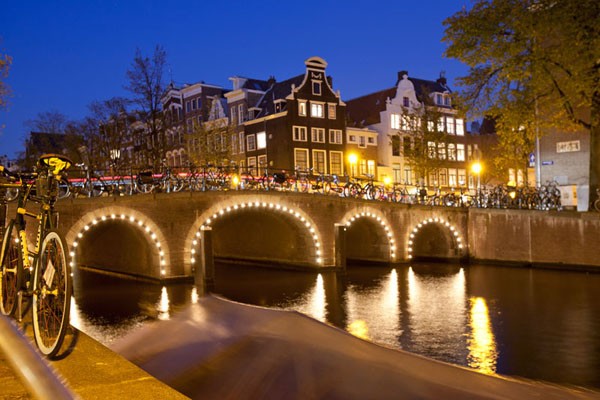 What did you do?
Scott: For five days we covered the city on foot and bicycle, eating, drinking local beer, and photographing the beautiful architecture and scenery. It was great to get lost and wander, marveling at the houseboats along the canals, wondering who the hell lives in there. We also took a day trip by bike to a nearby village.
Laura: We rented a sweet, two-level apartment in the gorgeous Jordaan neighborhood. We made a food map based on loads of pre-trip research, so we truly did a lot of eating. Between meals we wandered the city strolling canals, taking lots of pictures, drinking beer, visiting the occasional coffee shop. We went to the big museums (Anne Frank, Van Gogh, Rijksmuseum) and shopped and snacked at the best markets (Albert Cuypmarkt, Saturday/Monday Noordemarkt). On our last day, we finally made like locals and rented bikes, which we took past the windmills and farms to Ouderkerk aan de Amstel, about 12 km south of A'dam.

Were you there for the right amount of time?
Scott: We could have stayed for another week without question.
Laura: Five days was good and pretty relaxing, though I could certainly spend a lot more time there and be happy about it.

How did you get there?
Scott: We flew American from NYC to London to Amsterdam to use our airline miles amd save money. It would have been much better to fly direct from NYC like some of our friends did, but we are on a tight budget.
Laura: It's super easy to get to the city from the airport. You just take the Schiphol Airport Rail Service right to Centraal Station, about a 20-minute ride. From the station we walked to our apartment in Jordaan, rolling our luggage over the cobbled streets.

This was especially great:
Scott: Doing what we love (eating, drinking, traveling) with the help and support of our friends. The positives of traveling with a group are more ideas, more navigators, and more people to share the food.
Laura: Feeling like a local in our adopted neighborhood. We found a wonderful bakery a few blocks from our apartment with great bread and Dutch cheese — ingredients for a humble and delicious kaas broodje (cheese sandwich) — and a crowded butcher shop packed with locals. A jenever distiller we met said it was the spot for ossenworst (a local beef sausage).

But this wasn't:
Scott: The cold rain!
Laura: The Red Light District is fascinating but kind of creepy. 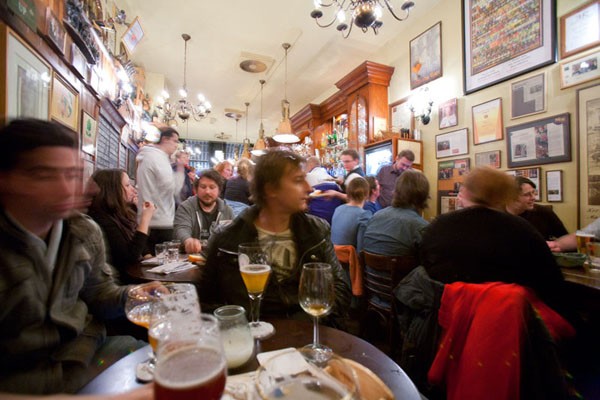 Speed round of favorites.
1. Meal or meals:
Scott: Restaurant Utrechtsedwarstafel, for the pace and quality.
Laura: Besides that, I had one particular homemade meatball that I could eat every day. And the spicy Dutch-Indonesian rijsttafel was a delicious change of taste.

3. Site/place/thing you did:
Scott: Bike riding through the city at night.
Laura: A bike ride out of the city is a must.

4. Cafe/casual hangout:
Laura: Café Winkel in the Jordaan was our morning hangout, with great coffee and the best appeltaart in town. At night, it was Café 't Arendsnest, where we spent a lot of time exploring the amazing selection of Dutch craft beers.

What's the local specialty?
Scott: There were so many! Stroopwafel, stamppot, snert, bitterballen, just to name a few. So much great fish, cheese, beer, and desserts.
Laura: And you may have heard of the city's coffee shops.

One thing/place you didn't get to visit, but wanted to:
Scott: The Heineken factory. Kidding!
Laura: Vondelpark. It was too cold and rainy to appreciate it. And we never took a boat ride on the canals.

Let's talk about stuff.
1. Glad you packed:
Scott: Extra layers and an umbrella.

2. Wish you'd packed:
Laura: Warmer clothes. It was colder than we'd expected. I had to buy gloves while there.

4. Brought back:
Laura: One package of stroopwafel (not enough!), some bags of potent salty licorice (my grandmother likes it).

Would you go back? If so, what would you do differently?
Scott: In a hot second, but for a month. I would go in the summer and relax (and party) on a boat in the canal.
Laura: Yep, I'm thinking two words: summer houseboat.

Any surprises?
Scott: Even after being there before, the beauty was still surprising. Also, just how good a croquette out of a vending machine is when you're starving.
Laura: Our friends made us go clubbing one night, which is not something I ever really do. It was super fun! I was surprised that I actually enjoyed the music.

What was your Kodak moment?
Scott: Being with friends at the Seven Bridges with the sun going down, bikes parked to the side. What a moment.
Laura: I'd say the image every night of the city at dusk: blue-gray sky, canal-side lanterns aglow, lamps on inside the elegant rowhouses. The Dutch seem to always have their curtains open. It's impossible not to gape a little.

You can't stop thinking about:
Scott: The fresh market food in the Noordermarkt. Hot ham with mustard on a roll, erwtensoep (pea soup), and warm poffertjes (mini pancakes).
Laura: In the late afternoon, we'd inevitably wind up at a bar or brewery drinking local beers and eating local cheese — one of my favorite things to do with some of my favorite people. Every day should end that way!

The Top 24 Travel Blogs and Websites