Geoffrey Weill, the founder of the award-winning travel PR company WEILL, has been obsessed with travel since he was a child growing up in England. That passion led to a lifelong career in the travel industry, a journey he recounts in fantastic detail in his new book, All Abroad: A Memoir of Travel and Obsession. If you read his Travels in Corona Europe diary on Fathom last fall, you'll know he has a keen eye for detail and a deep respect for the fine art of hospitality. In this excerpt from his book, Weill recalls the glory days of crossing the Atlantic.

Andrew Lloyd Webber, in his memoir, Unmasked, wrote that for those of us born sadly too late to have been able to cross the Atlantic in the splendor of the Normandie or of the Queen Mary in their heyday, nothing, but absolutely nothing, can beat the sheer glamour that was flying on the Concorde. It wasn't just the speed, although that was indeed remarkable: enabling the traveler to arrive in New York at 9 a.m. after leaving London two hours later, at 11 a.m. But, no, it was the cosseting. It was — particularly on the British Airways version — the shamelessly grand way one was treated — as if legions of planners had sat around boardroom tables spending hours and days discussing how to make it seem worthwhile to spend an absurd $8,000 (in 1979 dollars) to cross the Atlantic one way… which is, of course, exactly what must have occurred. The Concorde was a joint venture of the British and French governments which poured millions and millions of pounds and francs into what was really a vanity project. The British wanted to call it Concord but that would have been pronounced "Concor" in French — thus it became Concorde.

One drew up at Heathrow's Terminal 3 — then still called "the Oceanic Terminal" to differentiate it from Terminal 2, named "Europa," or Terminal 1, which even then was so horrible that I believe it remained unnamed, although perhaps it did rejoice in the title "Britannia" — and entered through a doorway emblazoned with the distinctive navy and silver Concorde logo. Check-in was effected with such speed, bowing, obsequiousness, and deference that it was barely noticed. Luggage was whisked away after baggage tags of the finest leather were tied to the cases' handles. One was then ushered across carpets into a private attended elevator and whisked somehow vertically then horizontally past the throngs and hoi polloi flying — dare one say it: "subsonic" — and steered into a lounge directly adjacent to the tarmac, its windows in full view of the needle nosed plane.

If it was winter, coats were taken with a crisp British merchant marine "G'morning, Sir" and hung on racks to be later wheeled into the aircraft. Teams of British Airways' most senior and reverent minions were on call to bid one welcome, to offer newspapers, to see to any possible request and to fawn shamelessly. The point was that every single person in that lounge was either hugely rich, hugely celebrated, hugely well-employed or hugely lucky. Travelers sunk into couches, affecting nonchalance and a weary veneer of ennui amid mounds of Vuitton, Gucci and Asprey. Flutes of Champagne (white or rosé) were proffered from silver trays. One chose several or a dozen of the most elegantly coiffed canapés ever constructed by humans, placed them on porcelain, nonchalantly munched and wiped lips with linen so starched it scraped.

The Atheneum Club atmosphere was not tarnished by microphones announcing it was time to board. Instead, several of the minions walked gently to each of the one hundred (if it was full) passengers, and invited them to board. It was all done with utter calm, utter grace, utter leisure. No standing in line, no foot-tapping as the passenger in front of you tried to cram a roller bag into an overhead bin — just an effortless stroll from the comforts of the lounge to the sleekness of the plane seat.

Unlike the Boeing 747 which the Concorde preceded, it wasn't spacious. But it didn't seem to matter: just two navy leather seats on each side of the aisle, plenty wide with very generous legroom. There was no need for today's flat beds and mounds of duvets and pillows, because the Concorde's fuel tanks were unable to hold more than four hours-worth of kerosene. The windows were tiny, perhaps eight inches by five, and set just a little too high to be continuously peered through.

Once strapped in, announcements were made as the Concorde taxied to the runway and given preferential treatment by the gods of the control tower. There was none of the customary waiting in a line of 17 aircraft for take-off; the Concorde just wheeled directly onto the runway, quickly gained speed and pointed skyward. All seemed normal at first. The flight attendants did their usual bustling about and it was only then, if it was your first time, you noticed the digital display at the front of the cabin giving notice of the aircraft's speed. ‘Mach 0.85' it would read (Mach 1.00 is the speed of sound) for the first thirty or so minutes. Because it made a fearful noise as it broke the sound barrier and showered the landscape with poisonous carbons, the Concorde was not permitted to fly supersonic until it had crossed the coast and was above the ocean, and damn the fish if it was too loud or too toxic.

Suddenly, but without the least ferocity, there was then a sharp increase in engine noise and we were compressed into the back of our seats as the speed dial quickly climbed to Mach 1.00, 1.25, 1.50, 1.75 and ultimately 2.00 — the equivalent of 1,400 miles an hour. It was all very Star Trek. Gradually, quickly, the crushing into the seat was relaxed as the body adjusted to the speed and it was soon that, peering out of the tiny windows, one noticed not the fields or sea below, but the curvature of the earth: we had reached 70,000 feet, twice the average height flown by a subsonic plane. We were aviation royalty tempting to brush the edge of the earth's atmosphere, no longer blue but violet.

An extremely elegant meal was served (always lunch or dinner) — the Concorde never needed to fly overnight — with mounds of caviar, reams of smoked salmon, buckets of foie gras, followed by delicate main courses and manicured desserts, all washed down with gallons of Pol Roger and Perrier.

The 11 a.m. Concorde from Paris literally did arrive at JFK at 9:30 a.m. We had beaten the sun and an identical pattern of cossetting and reverence greeted our arrival except, of course, for the the snarling gentlemen of the U.S. immigration service who, still indoctrinated with the bonhomie and charms of turn-of-the-20th-century-Ellis Island, cared little if you were entering on the Concorde, the Lusitania, or a banana boat. Yet the scowls had an upside: the process of inspection being sufficiently sluggardly to ensure that as soon as one was admitted to the Land of the Free, one's luggage was already circulating on the carousel and Air France's American minions had rolled the coat racks ashore and were considerately enshrouding their owners back into their cashmeres and minks.

Of course, there were and remain flying experiences that rival the Concorde but none can ever match it until the day comes when supersonic flight is somehow made environmentally acceptable. For instance, in the early years of the Boeing 747, often termed "The Queen of the Skies," First Class passengers could sashay up that broad circular staircase to the upstairs lounge to slurp caviar and munch filets mignons at tables for four, or laze on the couches lining the windows. It was pretty pointless, but it was also wonderful and entirely the next best thing to getting to one's destination in half the time. Even in the 21st-century, the opulences and luxuries and showers installed by the heavily subsidized Arabian Gulf airlines, not to mention Singapore Airlines, Qantas or Lufthansa or even plucky old British, do certainly impress, and do certainly make the journey blissful. But what the Normandie, the Bremen, the Queens Mary and Elizabeth, the ss United States and yes, even the doomed Hindenburg were able to vaunt was that they were the fastest way to cross the pond. That mattered beyond all else. So it was with the Concorde.

In the 21st-century, Cunard ships still ply the New York to Southampton route — and other cruise lines seasonally offer transatlantic "positioning" voyages at the dawn of the Baltic/Mediterranean season or Caribbean seasons, but all have given up any pretense of speed: after all, if you wanted to get there fast, why would you choose a boat? In 2020, the Queen Mary II crosses from New York to Southampton in a leisurely seven days.

All in all, the Concorde plied only two routes — connecting New York with London and Paris — the most glamorous routes of all time. There were brief experiments with Singapore Airlines from London to Singapore — and with the now-defunct Braniff to Houston — but they proved to be unworkable as so much of those journeys had to be flown subsonic over land masses.

All in all, I have been lucky enough to cross the Atlantic by ship six times — once, at 13, aboard the original Queen Elizabeth, once on the Canberra — my immigration voyage, once in a storm-filled January in the gallic majesty off the SS France, and three times on the QE2. On one QE2 voyage, I was traveling with a convention of members of the Society of American Travel Writers. It was November, the seas were rough and, for reasons poorly explained, the stabilizers were not employed to limit the ship's rolling; after unloading us all in Southampton, the QE2 was to continue to Hamburg, where its coal powered engines would be replaced with oil-fed machinery (some months after the voyage each of us was sent a piece of iron from the old engines encased in lucite, as a souvenir of the QE2's final steam-powered crossing of the Atlantic). On that voyage, half the passengers succumbed to sea sickness. One always knows when rough seas are ahead as the staff quietly remove unnecessary paraphernalia from coffee tables and add additional rope handrails in corridors. And at a gala cocktail reception on the roughest night of the voyage, a vast and complex ice sculpture — into which kilo cans of caviar were imbedded — crashed to the floor, and Barbara Gillam, the glamorous editor of Glamour magazine, and I — she in a ball gown, me in a tux, instantly sat on the floor with large spoons and gulped downs great gobfuls of the finest Beluga. On a later voyage on the QE2, I was a guest lecturer as we sailed from Southampton to New York. I lectured on New York's attractions and on recommendations of Broadway shows. I always prefer the westbound voyage, because the clocks are set back an hour every night, so that every day is a blissful 25 hours. I haven't crossed the Atlantic by ship since the Internet was born. I'm not sure I much want to. The whole magic of a sea-crossing was that — unless there was an urgent family emergency — there was no connection with the world. We were alone in the middle of the ocean. 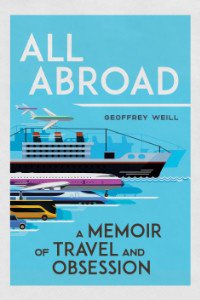 Buy All Abroad: A Memoir of Travel and Obsession from your preferred bookseller: bookshop.org, University of Wisconsin Press, or Amazon.com.