The retail scene in Brooklyn gets a makeover on the regular. And no one knows that better than Strolby, the Brooklyn-based website that showcases and sells products from incredible indie boutiques around the world. Editorial director Sarah Stodola has the scoop on the best up-and-coming shops in Brooklyn. By the way, we're psyched to announce the Fathom Collection for Strolby, which you can preview in this week's Travel Loot.

BROOKLYN – A stroll through any number of Brooklyn's of-the-moment neighborhoods quickly confirms that the borough has emerged as perhaps the most dynamic location in the United States for indie shops. Already known for setting global trends, the retail scene here continues to evolve, with dashing new home stores opening along Atlantic Avenue in Boerum Hill, shops rising on the previously bereft Myrtle Avenue in Fort Greene, and innovative clothing boutiques going toe-to-toe with — and besting — the chains popping up in Williamsburg.

Here are ten amazing new shops that are reinventing Brooklyn all over again. 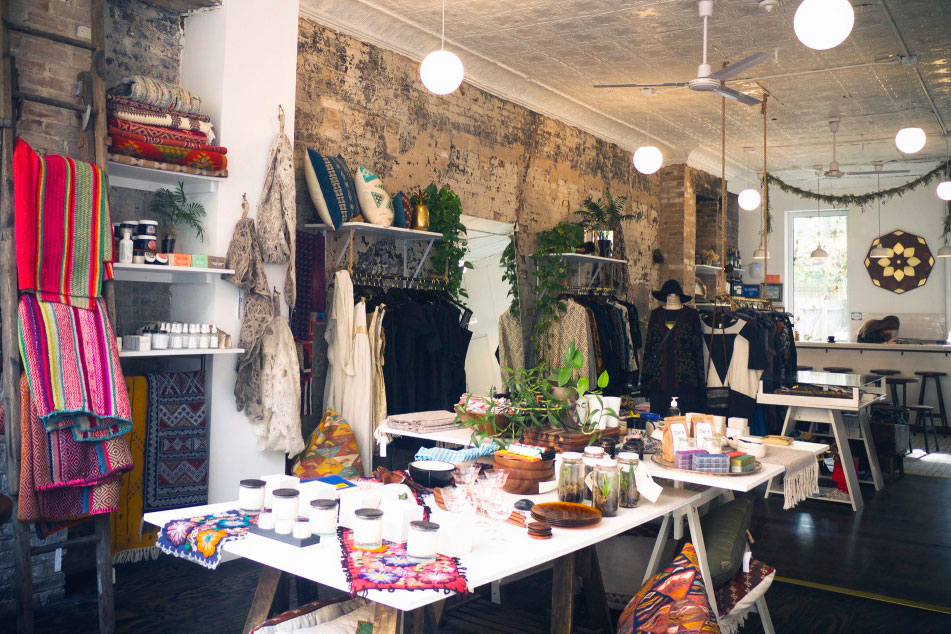 Patterns and textiles and Jill Lindsey.

Jill Lindsey
370 Myrtle Ave., Fort Greene; +1-347-987-4538
A multi-hyphenate in the best sense of the word, Jill Lindsey opened last spring as part clothing store, part home goods shop, part cafe, part wine bar, and, soon, part bridal and flower shops. The eponymous owner shouldn't be able to curate each with such aplomb — no one should — but her knack for tracking down the best of the moment in independent design makes her shop endlessly pleasant to browse and almost impossible to leave without a new purchase in hand. 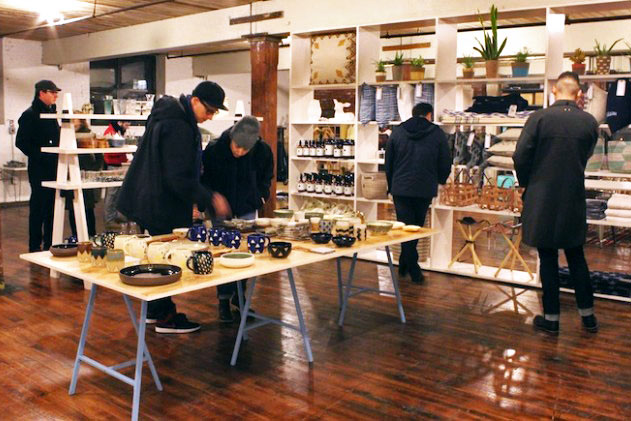 Home goods galore at Home of the Brave.

Home of the Brave
146 Franklin St., Greenpoint; +1-347-384-2776
The owners of renowned Greenpoint clothing store The Wolves Within spun off their sensibilities into a home goods pop-up last spring. The experiment was such a success that they opened a permanent space last fall, featuring a rotating inventory of ceramics, blankets, kitchen goods, and rugs that heavily favors Brooklyn designers and makers. 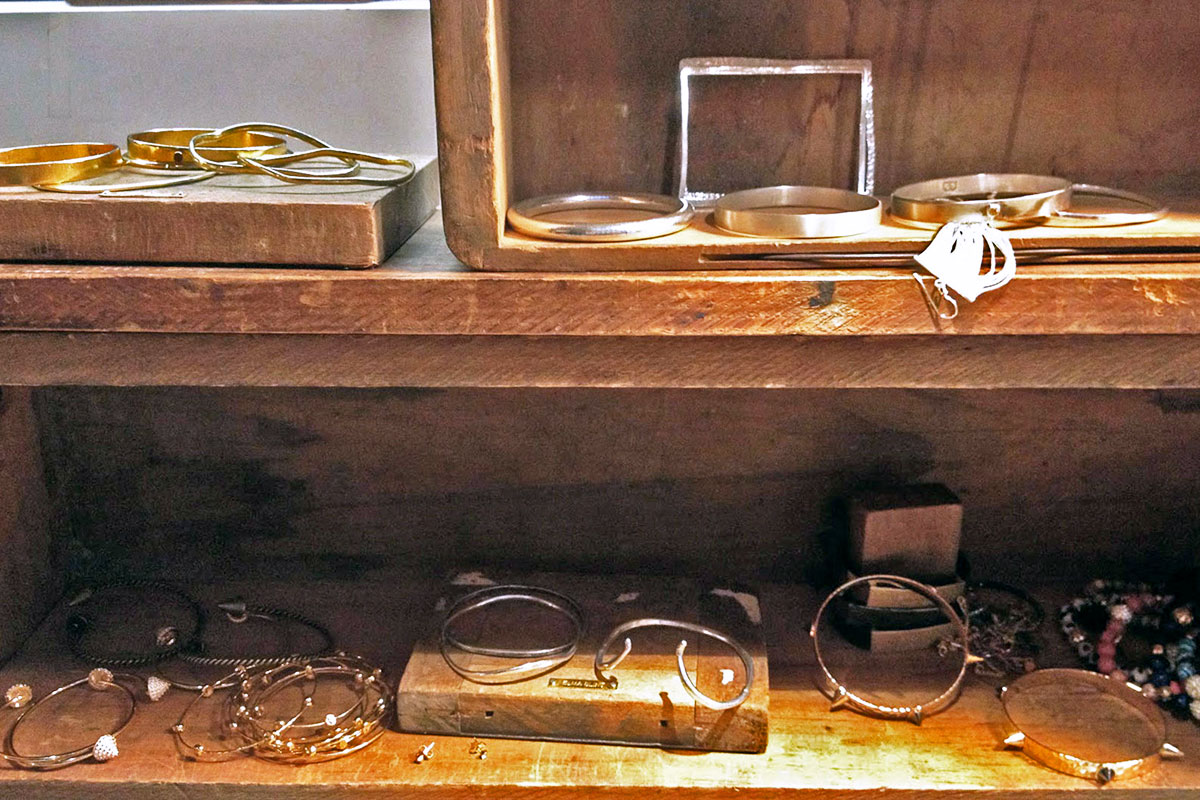 Elma Blint
739 Fulton St., Fort Greene; no phone.
A longtime vendor at the Brooklyn Flea, Elma Blint gave her jewelry line a permanent brick-and-mortar spot inside Courtney Washington's clothing boutique in 2014. Her trademark pieces exude a subdued cool and work as everyday accessories. The space has enabled Blint to expand her custom design services — she now has a place to sit down with customers — which is good news for anyone looking for one-of-a-kind wedding or other special occasion jewelry. 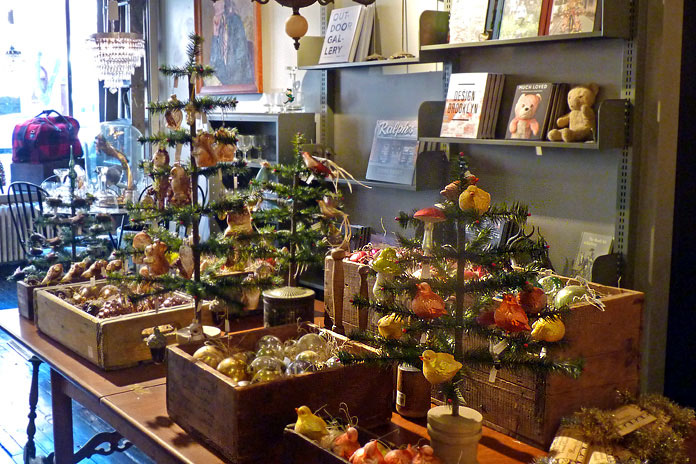 Northeast fare at Hunting with Jake.

Hunting with Jake
380 Atlantic Ave., Boerum Hill; +1-718-522-6075
Part of the influx of new home goods shops on Atlantic Avenue, this one mixes vintage and antiques sourced from around the Northeast, along with new items from a careful selection of indie designers and makers. Highlights include a collection of vintage plates, cutting boards from Gowanus Furniture Co., and leather pouches from Tracey Tanner, all with more palatable price tags than you'll find at other nearby shops. 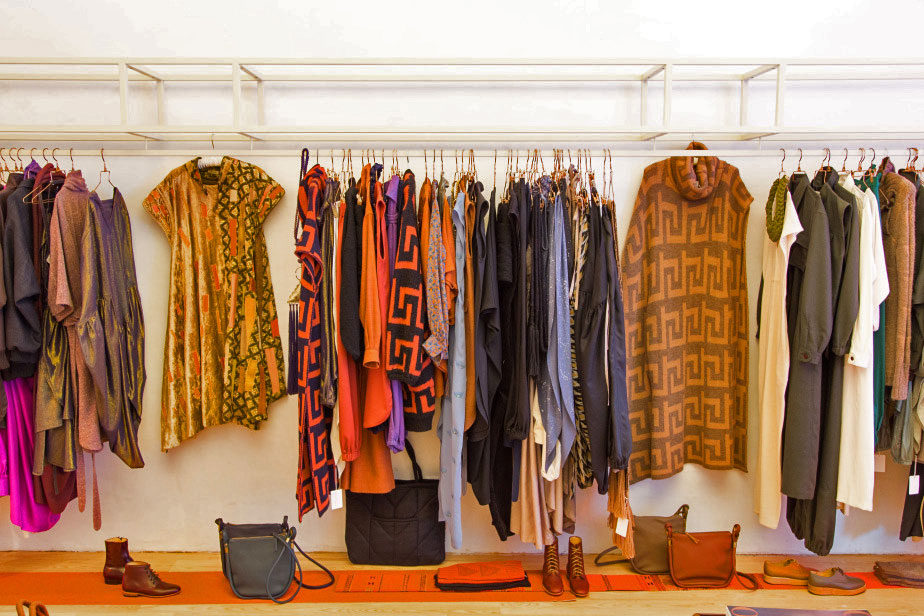 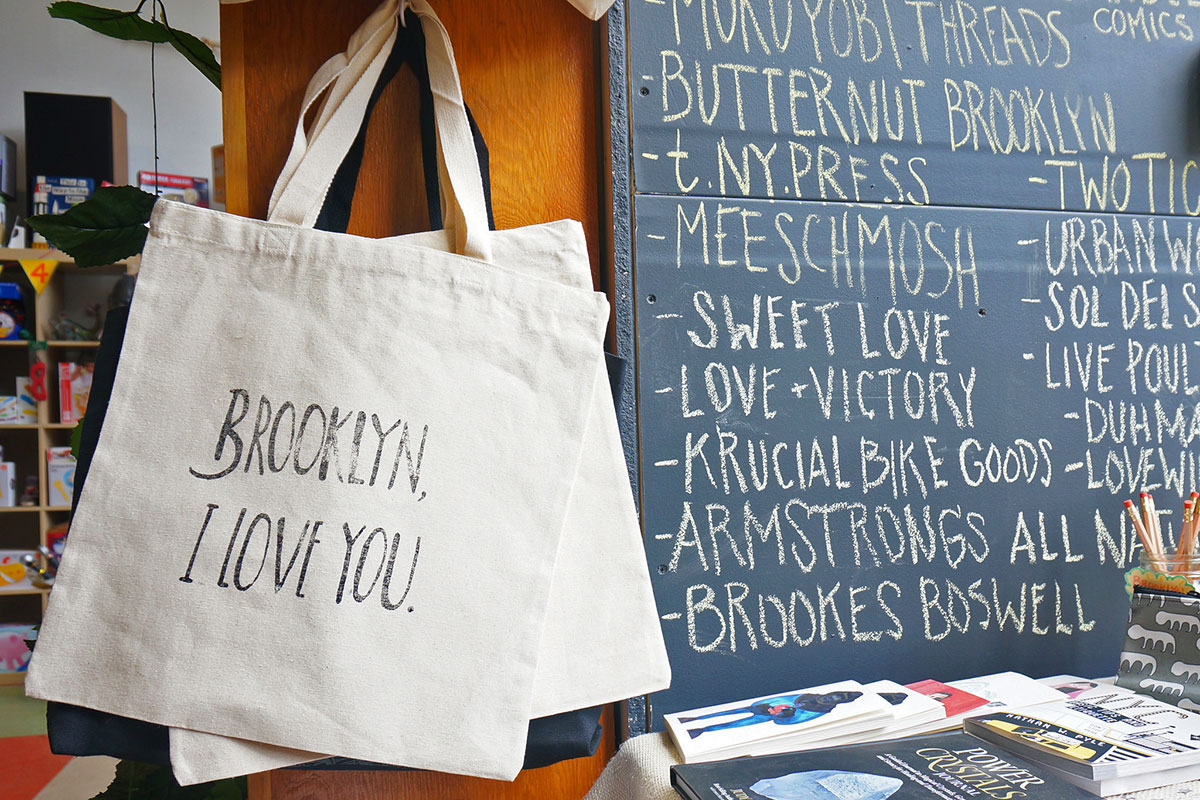 Greenpoint General Store
87 Oak St., Greenpoint; +1-718-218-7775
One stated goal of this new general store is quite specific: to help preserve the vibrant creative community in Greenpoint, even as gentrification and its attendant challenges come to the North Brooklyn neighborhood. To this end, the shop sells inventory sourced exclusively from local makers like DCP Ceramics, Psyche Jewelry, and PLANTbrooklyn. 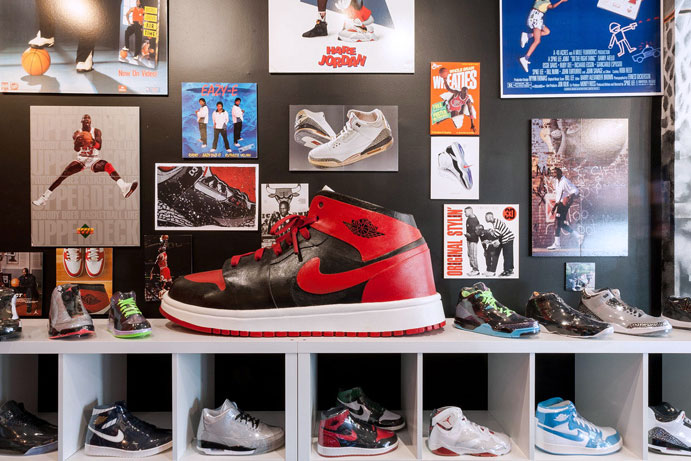 Jordan Heads Brooklyn
302 Malcolm X Blvd., Bed-Stuy; +1-347-690-0235
For a time in the 1990s, there was no person more fascinating than Michael Jordan, a once-in-a-generation athlete who made non-fans of the game line up for tickets. His superstardom spawned an entire industry of paraphernalia, including the legendary Air Jordan sneakers, which today have become coveted collectors items around which the owners of this new boutique in Bed-Stuy have built their inventory. For anyone with even a passing interest in Jordan at his height, this shop is a must. 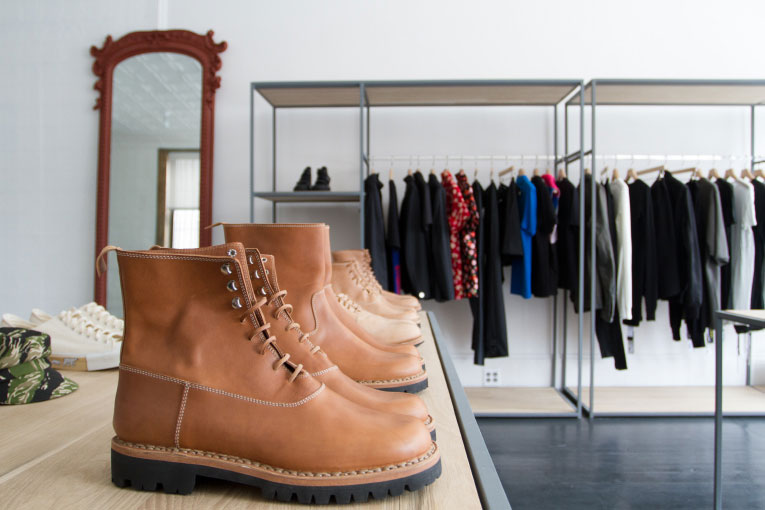 Idol
101 Metropolitan Ave., Williamsburg; +1-718-599-4365
The owners of this sleek, esoteric spot specialize in clothing and accessories for men that fuse influences from art, hip-hop, and fashion — a serious undertaking in which no expense is spared in pursuit of perfection. The shop is stocked with items that can only be called cult classics, often discontinued, often from labels that should be better known than they are. 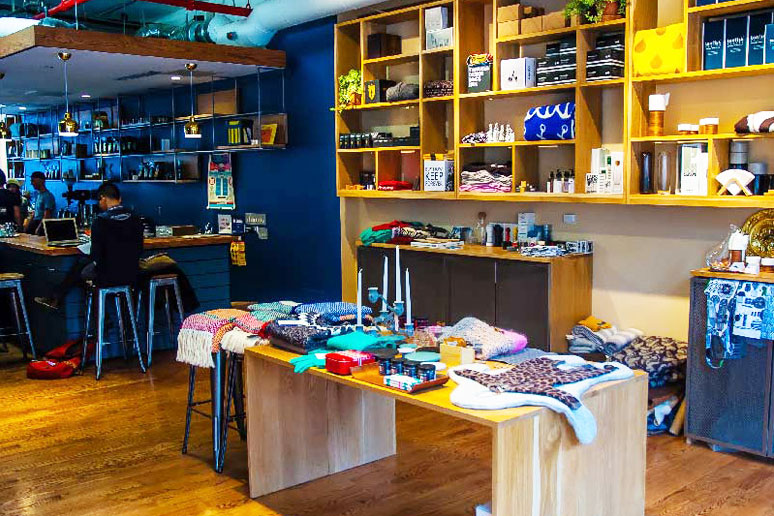 Coffeeshop and Scandinavian crafts side by side at Budin.

Budin
114 Greenpoint Ave., Greenpoint; +1-347-844-9639
This coffee shop/design store hybrid made headlines when it opened last year selling $7 lattes. Now there's a $10 version, as well as lattes from less obscure roasters for $4.50. Still, it's the shop's collection of goods from independent Scandinavian designers that's worthy of more attention. Much of the inventory has never been seen outside of Europe, making the finds here feel like true discoveries. 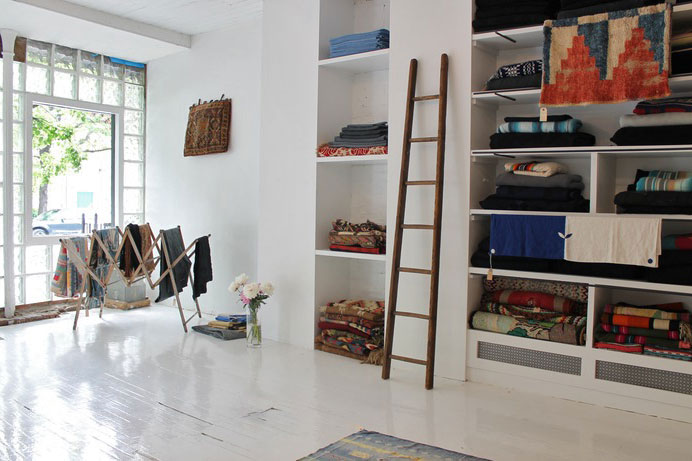 Carpets on display at Sharktooth.

Sharktooth
111 Grand St., Williamsburg; +1- 718-451-2233
Owner Erin Boyle made her mark giving antique textiles a contemporary second life by dying them deep shades of indigo — the effect was as transformative as it was unprecedented. From her new South Williamsburg shop (she formerly occupied a much smaller space in downtown Brooklyn), she also sells unaltered vintage rugs and bedding in impeccable restored condition, and at refreshingly reasonable prices.

The Fathom Collection for Strolby